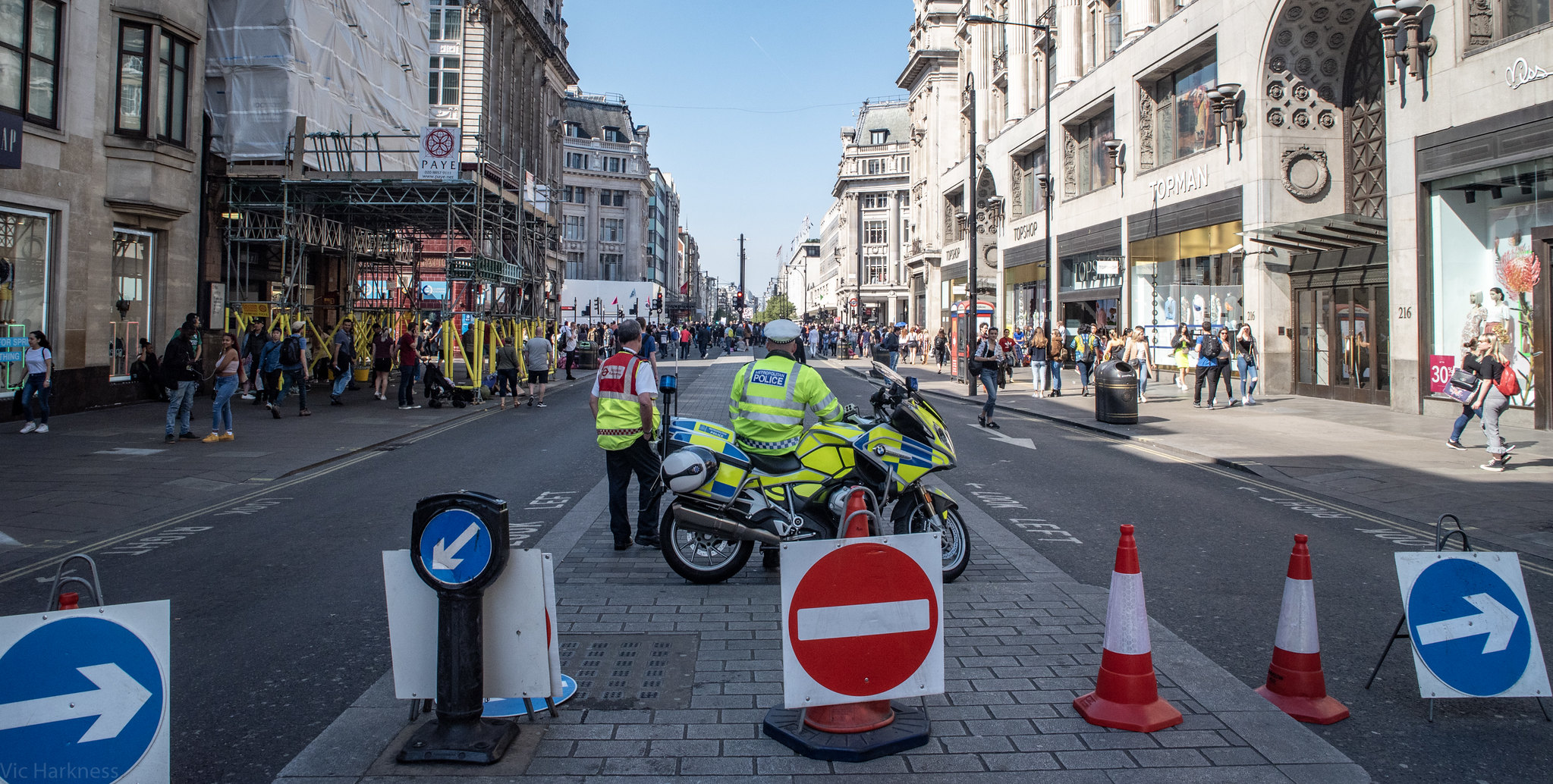 As part of my quest to see the Extinction Rebellion protests, I stopped by Oxford Circus. Protesters had previous had a pink boat set up in the centre of the intersection to block traffic, but this had been removed the day prior. The day that I was there (Saturday), it was just standard protesters. 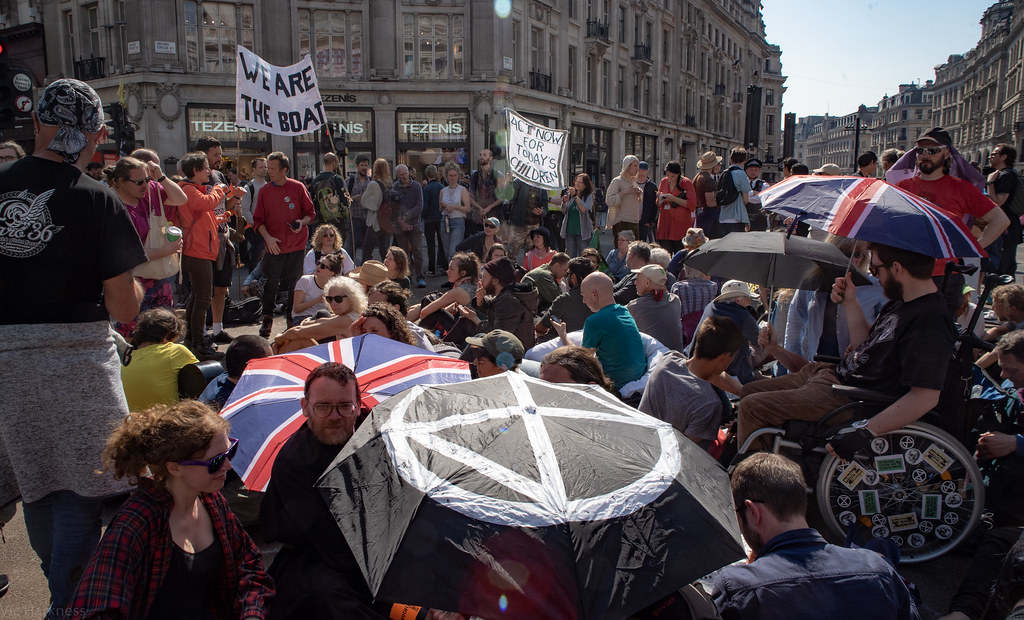 During the time I was there, police began amassing. They spoke to one of the de-facto protest heads (i.e. the person with a megaphone), and she repeated their message. The police intended to begin arrests in 5 minutes. In response to this news, anyone who remained and was willing to be arrested in solidarity (over 700 arrests have been made so far) was to sit down. Those who did not want to be arrested were to march to the Marble Arch and join protests there.

Quite a lot of people sat down. 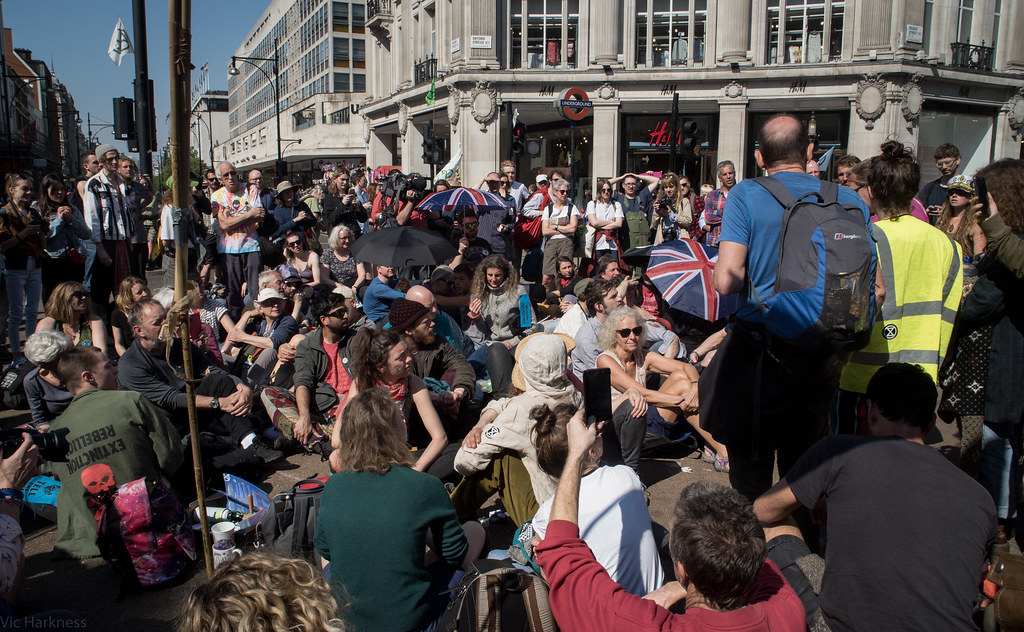 It seemed that many people were willing to be arrested; impromptu seminars on how to passively resist arrest were being held, and I stood in on one. We learned about how to prepare to be arrested. Smaller groups were self-organised, and a support person was chosen for each group. This person would hold on to the phones of those planning on being arrested, so that the police could not read their messages. The phone number of the support person was written on the arms of everyone in their group, alongside the phone number of a lawyer (I’m told you get two phone calls if you were arrested). Pieces of paper were passed around with helpful phone numbers, and general advice. 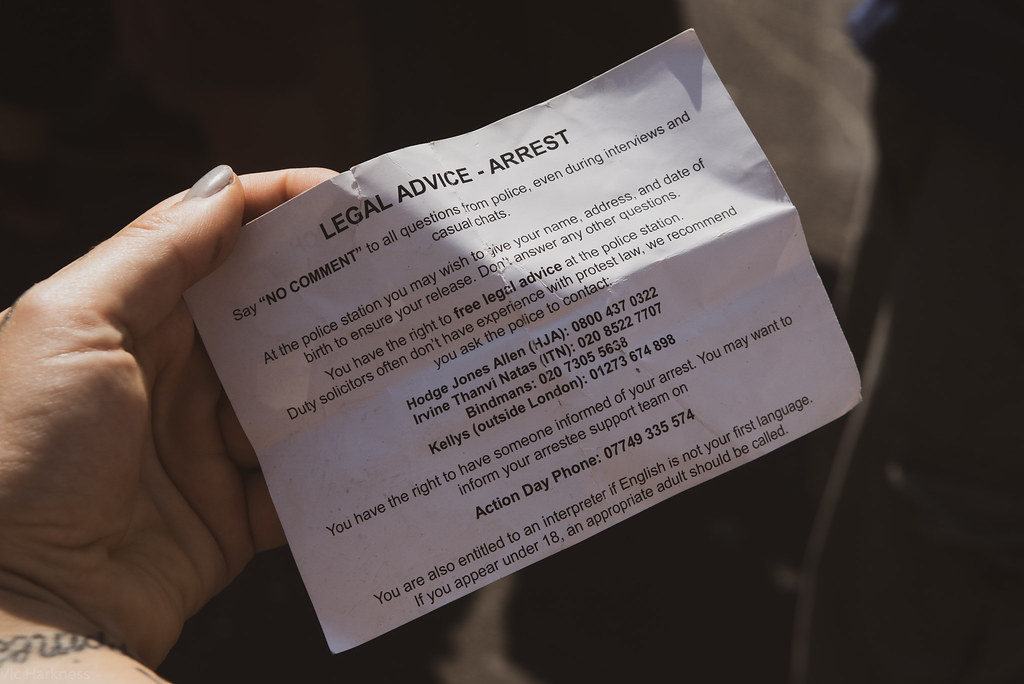 Various pieces of legal advice were given. You do not have to provide your name to the police, but generally it will lead to faster processing/release if you’re helpful. It’s unlikely that you will be charged with anything, as blocking a public highway is apparently a fairly minor crime. The advise was given that these arrests probably wouldn’t even come up on a DBS check, so don’t worry about job prospects. 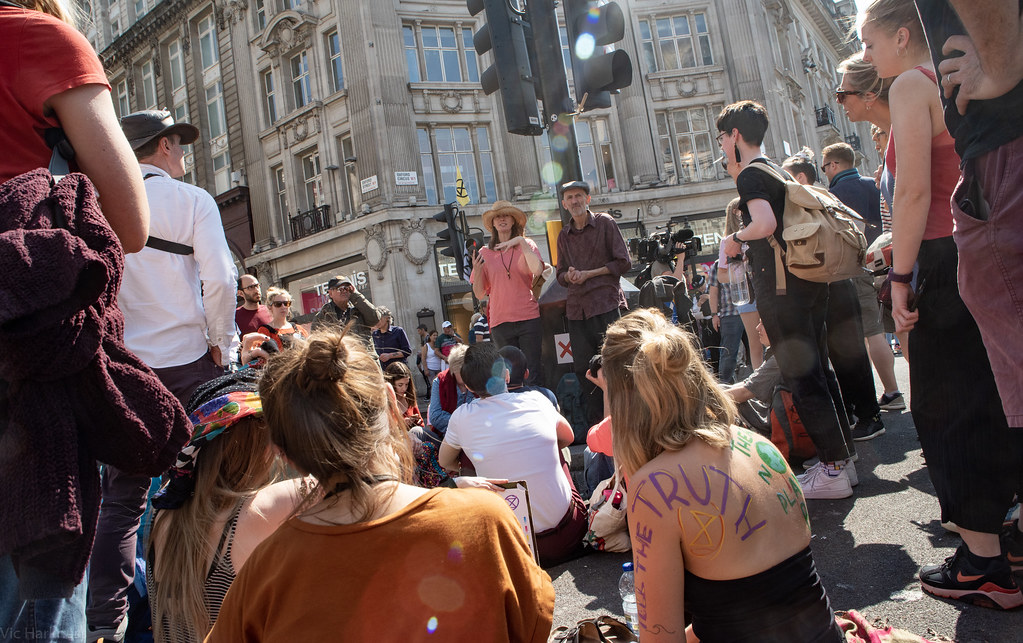 Legal advice done, next up we learned about how to be arrested. A volunteer was asked to sit down and tense up on the floor, so that others could mock arrest him. 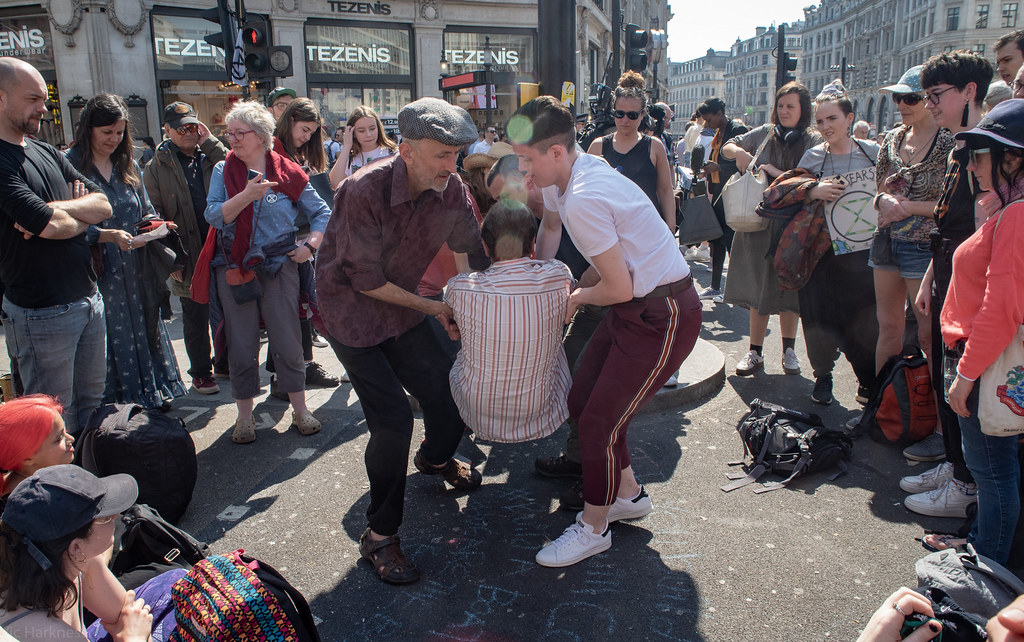 The arrestee was moved easily. So, if you are being arrested and want to waste as many police man hours as possible (this was how it was pitched), go floppy. It makes you much harder to carry. 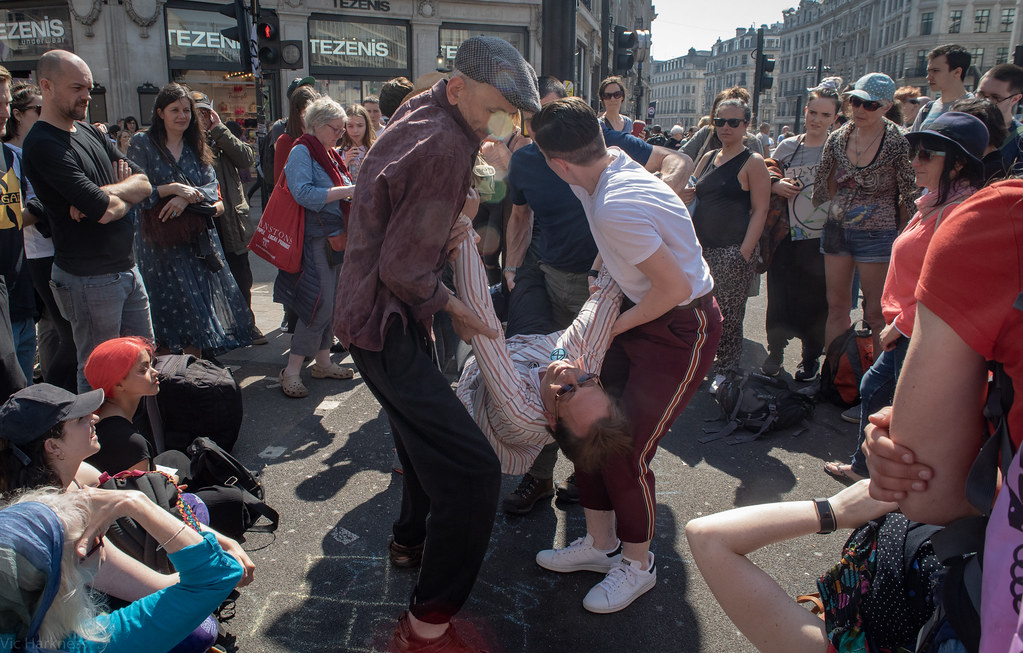 It did indeed seem to be a lot harder to move the guy once he went floppy, but the lecturer was keen to press that you don’t HAVE to be difficult- it’s perfectly valid to walk along with the policeperson and make their life easier. The protesters here seemed generally quite considerate. They were keen to make sure that the police weren’t being harassed/bothered, and weren’t being destructive of the area. 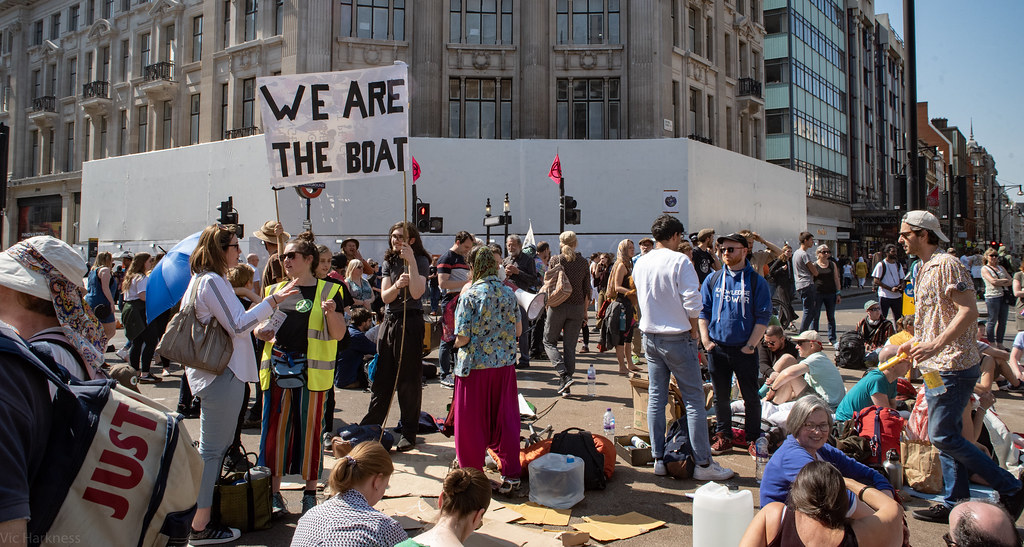 Some people were a bit more dedicated to being difficult to move. These two ladies were chained together inside a bit of metal pipe (so they couldn’t easily be cut free). 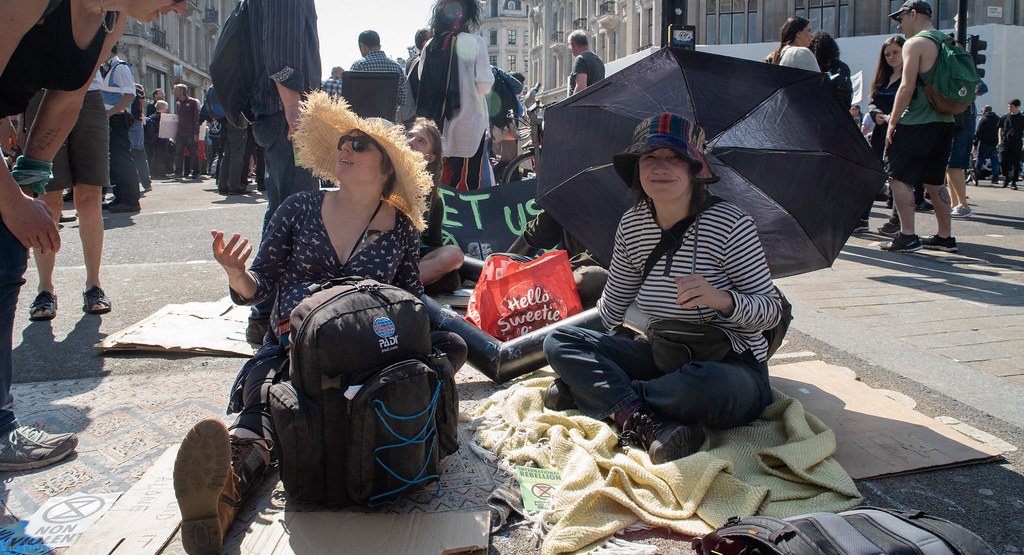 The lady on the left was pregnant, but other protesters seemed to be keeping an eye on her/helping her out as needed.

Being stubborn seemed to have been the right option. After 20 minutes, the megaphone lady was back. The police had decided not to conduct arrests at this time. The stalemate resumed.

After here I walked back to Waterloo Bridge which by that point was full of police, so I assume that’s where they all had headed off to.