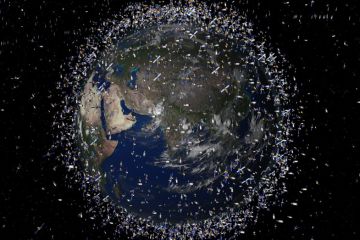 The problem with space junk: Where are they now?

The tl;dr of these posts is that the space around the good old terra firma is becoming quite a mess- and not just at the surface level. From space launch junk to prior science experiments, we launch a whole bunch of stuff in to space with the expectation that it will just remain there.

If we want to avoid the Kessler effect kicking in to full swing (i.e. bits of junk colliding which creates fragmentation which makes up more junk, causing more collisions), we need to tackle the problem. Being more careful about the junk we launch in to space does not seem to be a viable solution, as we have now reached a weird point in human history where regulatory bodies can be dodged to launch more stuff in to space (see the third above linked post).

The worst area for space junk is Low Earth Orbit (LEO), sitting at between 160km-2,000km above Earth. Although the rate of debris generate has somewhat abated in recent years (See: https://amostech.com/TechnicalPapers/2018/Poster/Archuleta.pdf for graphs), there is still a whole bunch of junk up there. The Geostationary Earth Orbit (GEO) band, home of numerous satellites, is also quite bad.

In one of my previous posts (the middle one in the links at the top), I discussed suggestions to try and address the problem. In this post I will be conducting a “Where are they now?” update on this list, and in a follow-on post I will be describing new contenders.

Laser Broom
“The laser broom is a proposed Earth-based system for handling the issue of space debris. This system would be designed to target pieces of debris between 1 and 10cm in diameter, which may be at risk of collisions with crafts such as the International Space Station (ISS). The intention is that the laser will be powerful enough to both penetrate Earth’s atmosphere, and to be able to ablate pieces of space junk to increase their drag. This will alter the object’s orbit, and so will hopefully cause it to re-enter the atmosphere and burn.”

At the time of writing, the laser broom was considered non-viable by NASA due to the risks stemming from inaccurate firing, as well as the lengthy amounts of time it would take to sufficient ablate material to induce deorbiting. Interestingly, the idea of the laser broom has now been picked up by China’s Air Force Engineering University. In their proposed scenario, the laser broom itself would also be space-based, reducing the amount of power needed to handle things such as the atmosphere and the distance involved (https://www.sciencedirect.com/science/article/pii/S0030402617312068).

Through simulations, it was found that the satellite-based laser broom system should sit in orbit around the 800km mark, as for best results it needs to be within 200km of its target. After 10 passes of the laser system on each piece of debris, it seems that the proposed system would be sufficient to induce deorbiting in the target piece of junk (for the simulations, bits of aluminium).

This approach sounds quite promising, but the downside to the above linked research is any viability study of a satellite-mounted laser; a lot of simulations have been conducted on how much power is needed to deorbit material, but not how to create a laser that is able to charge up sufficient power to be able to fire lasers at space junk all day.

ElectroDynamic Debris Eliminator (EDDE) Vehicle
“The proposed EDDE system consists of a fleet of small (weighing up to 100kg each) vehicles which “sail” through ionosphere. A large part of an EDDE’s body is made up of a several kilometer long metal tape. Electrons from the ambient ionosphere plasma are collected in one end of this tape, and are ejected back in to the plasma from the other end of this tape using hot-wire electron emitters. Thrust is generated by the current in the tape crossing electromagnetic field lines.”

“EDDE is intended to “catch” debris using a net. EDDE would contain ~100 expendable gossamer nets, each weighing 50g. EDDE would launch a net rotating at a speed of ~2rpm on the end of tethers. As the object to be captured passes over the center of the net, the tethers can quickly be retracted to capture the object. Objects can then be dragged so that they then re-enter the atmosphere and burn-up.”

Unfortunately, there do not appear to be any updates on this one.

Dust
“It is theorised that dust could be used to induce drag (and so re-entry) on objects. A rocket could be launched in to LEO, releasing ~20 to 40 tons of dust, orbiting in the opposite direction of the targeted object. The collision between the dust and the object would increase the drag on the object, causing its orbit to decay (and so for the object to re-enter).”

As above, the idea of using tungsten dust to deorbit space junk has had no updates.

CleanSpace One
“CleanSpace One is a system similar to the proposed EDDE system, in that it uses nets to capture objects for forced re-entry. Initial designs of the system proposed using a claw to grab objects, but a conical net was deemed to be more practical.”

The CleanSpace One project remains, as of the last update (provided September 2018), in a funding consolidation phase. Their website seems to imply that some technical research work is still being undertaken, but nothing major has been posted.

Solar Sails
“Adding small “sails” to satellites which can be deployed at the ends of their life-spans could provide an easy way of increasing drag and so inducing re-entry. It has also been suggested that solar sails could be developed which could then be deployed on to existing space junk, causing the drag needed for re-entry.”

Some work has been conducted in this area. SpaceX is set to help launch a LightSail cubesat on their SpaceX Falcon Heavy rocket, designed as a proof of concept to demonstrate the first solar sail flight in Earth orbit. Although a proof of concept and not a design to address the issue of space junk per se, it’s interesting to see that development is taking place within this area.

Another cubesat based solar sail suggestion is the TugSat, a conceptual cubesat which can navigate via solar sail, and could latch on to pieces of space debris to deorbit them. At this stage the TugSat exists only in simulations, making it something to perhaps keep an eye on for the future.

Sling-Sat
“Sling-Sat is a novel solution to the power issues associated with having vehicles rendezvous with space junk objects in an effort to capture them; Sling-Sat aims to capture and release objects through plastic collisions. It is proposed that the momentum gained from such collisions could be used to send the Sling-Sat on its way towards its next targeted object.”

The Sling-Sat appears to remain another pipe dream. As I previously commented it seems like it would be very difficult for this concept to work without creating more space junk from collisions, so perhaps this is why. There was the proposed idea of using a net to capture junk and then swing around it to launch it off in the opposite direction to the Sling-Sat, but it still seems pretty non-viable.

Tractor Beam
“Tractor beams are a staple of science fiction, and would certainly be an elegant solution to the problem of space junk. Researchers have been able to create a traction beam for tiny objects using ultrasound. It has been proposed that this technology could be used in the creation of “electronic sonotweezers” which allow for the careful maneuvering of particles. However, there are two glaring issues with the use of such technologies to handle the issue of space junk: 1. Space junk tends to be quite large, and 2. In space, no-one can hear you scream (that is to say, the sound waves used in this technology cannot propagate in space).”

“A different potential type of tractor beam has appeared in an unusual place: the Hendo Hoverboard (by Arx Pax). These boards are able to hover via “electromagnetic repulsion” generated by an engine known as the “Magnetic Field Architecture”. Elon Musk of SpaceX has expressed an interest in the technology for the Hyperloop, an envisioned high-speed transportation system. NASA has begun collaboration with Arx Pax in the hopes of creating a traction beam suitable for the maneuvering of defunct satellites, the theory behind this being that the satellite is both pulled and pushed away with equal force, causing it to be captured and held stationary relative to the beam’s source.”

Once again, this is an area that has not provided anything of much use. The electronic sonotweezers aren’t useful in space for the above stated reasons, and Arx Pax now appears to be a building safety company. Such is life. Another area that could be very interesting, but would probably require a heavily disruptive new technical development to be viable for tackling the issue of space junk.

e.DeOrbit
“The e.DeOrbit system is a large vehicle (weighing in at around 1600kg), designed to capture space junk objects and induce their re-entry/burn-up.”
Interestingly, the e.DeOrbit system project is still going. It has changed form a bit no longer being proposed as a space junk capturing device; it is now proposed as something of a remotely operated space swiss army knife (space army knife?), designed to tackle a whole range of tasks.

There are still hopes that it could be used to capture defunct satellites and other pieces of space junk as they pass close-by its operating platform (i.e. the International Space Station), but it would primarily be aimed at other tasks. It appears that the European Space Agency has had issues with securing funding for a space-junk clean up system, and so has widened the scope to attract more funding.

As before, this system is still in the theoretical design phase.

Electrodynamic Tether
“Developed by the Japan Aerospace Exploration Agency (JAXA) the electrodynamic tether system is designed to generate electricity to slow down space junk orbits, causing re-entry. This is done using similar principles to those seen in the EDDE system, whereby a current can be induced in a wire via traveling through the Earth’s electromagnetic field.”

Another technology that appears to have not really been developed. A contract was place with Star Technology and Research back in 2012 to use this technology for space debris removal, but their work does not appear to have gone beyond the conceptual stage.

Space Debris Elimination (SpaDE) system
“The SpaDE system aims to remove space junk from via firing controlled pulses of atmospheric gasses in to the paths of orbiting debris, increasing drag and de-orbiting the junk using a method similar to that seen in the dust system mentioned previously in this post.”

Another technology area which has gone quiet, despite prior reporting that it was being investigated by Raytheon and NASA.