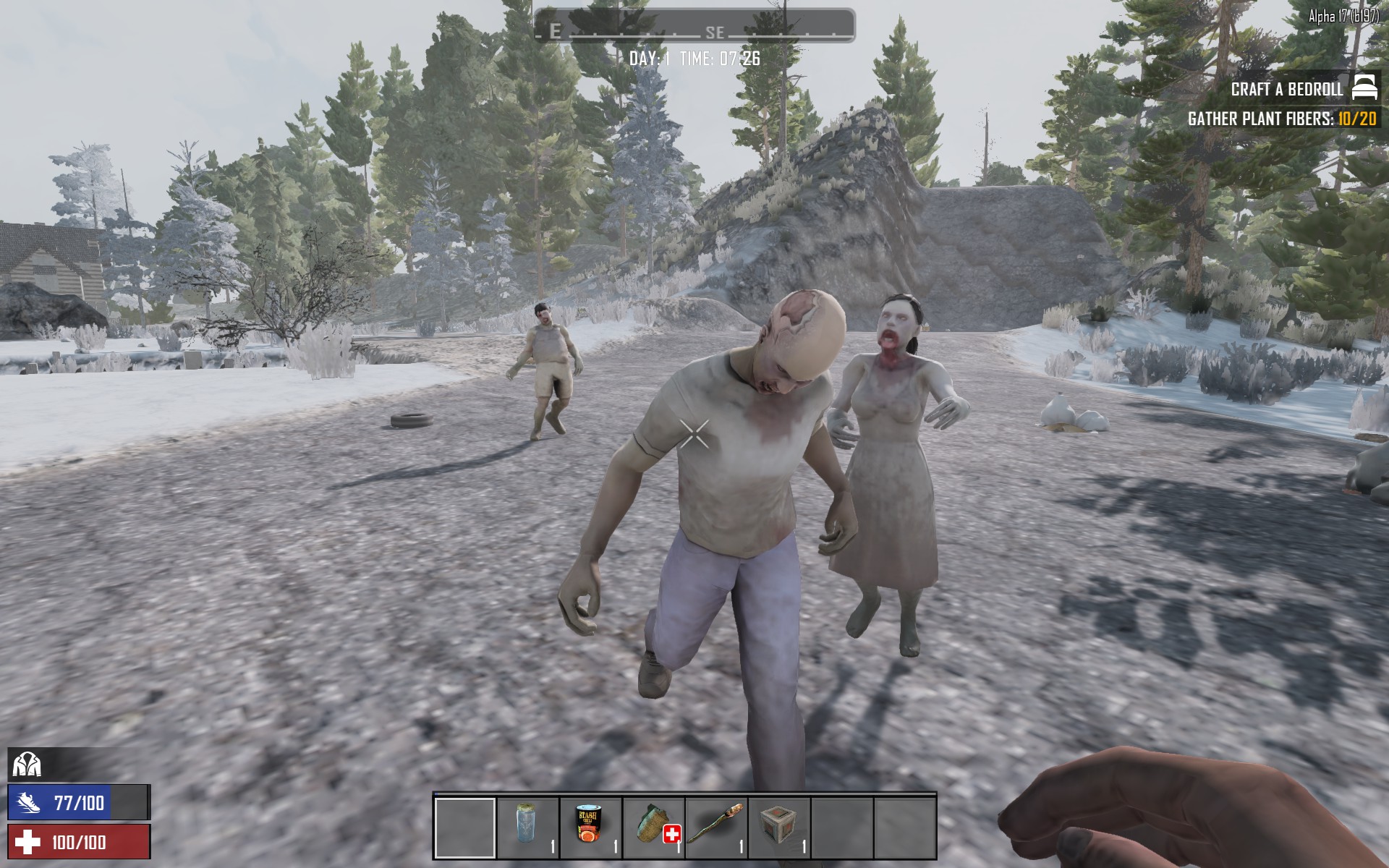 7 Days To Die is one of my favorite games. There, I said it. It’s been in Alpha for years and years with no signs of releasing. It’s buggy as all hell. The console version got shit-canned after the devs sold the rights to Telltale Games. Yet, I love it. I’ve spent 321 hours playing it according to Steam (a raindrop in the muddy puddle that is my gaming habit), but it’s something I’ve always enjoyed. Even in 2014 when it looked like this: 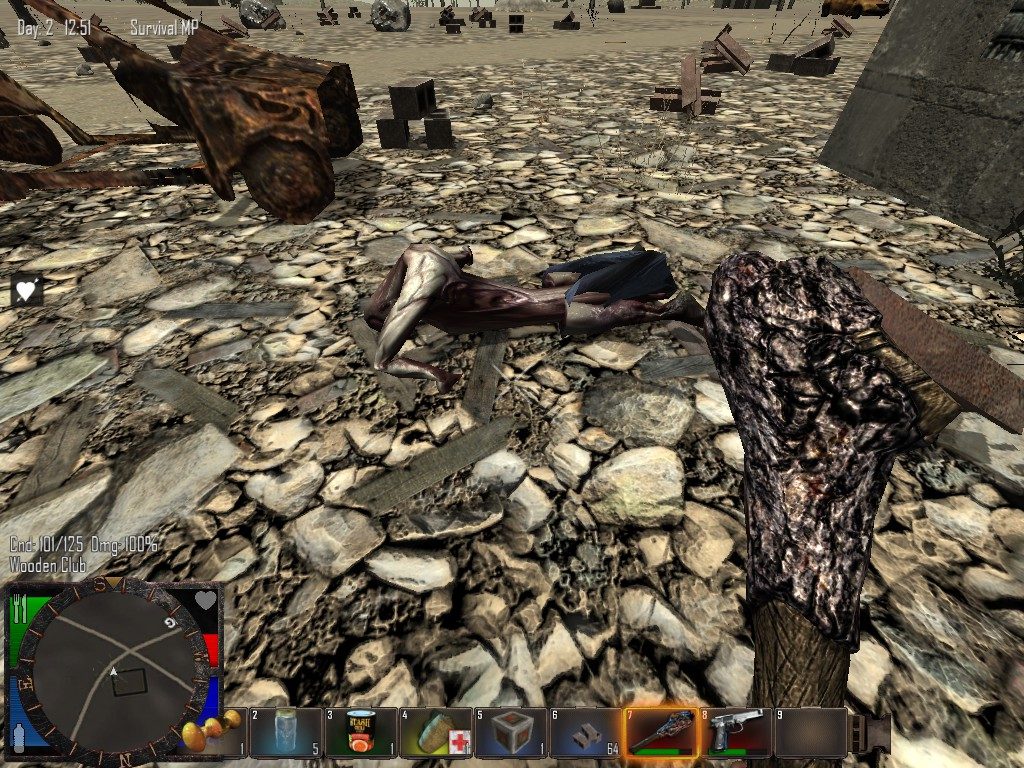 To be fair, my computer is old. I run things on low graphics settings. The devs (The Fun Pimps) keep updating the graphics engine/models, the apparent quality of which fluctuates for me. After one update, the weather became beautiful. 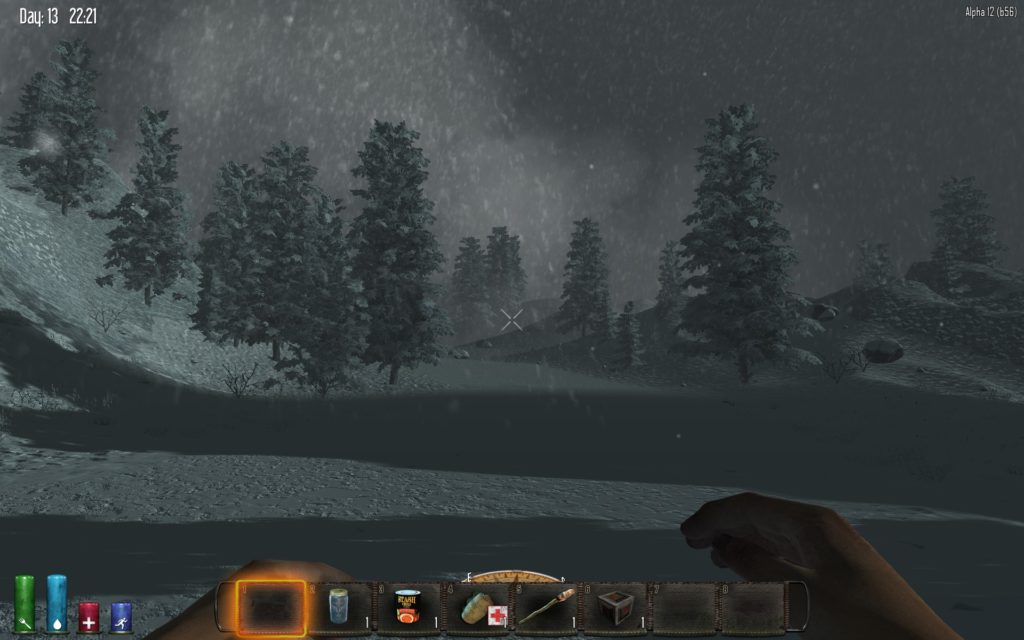 The dynamic lighting was beautiful. 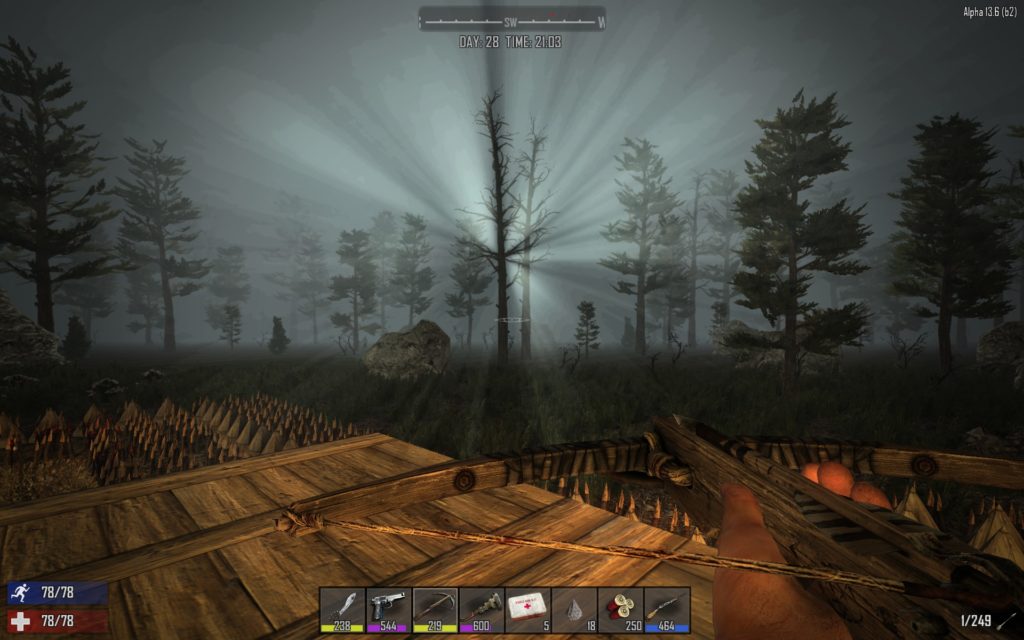 Even the models looked pretty cool. 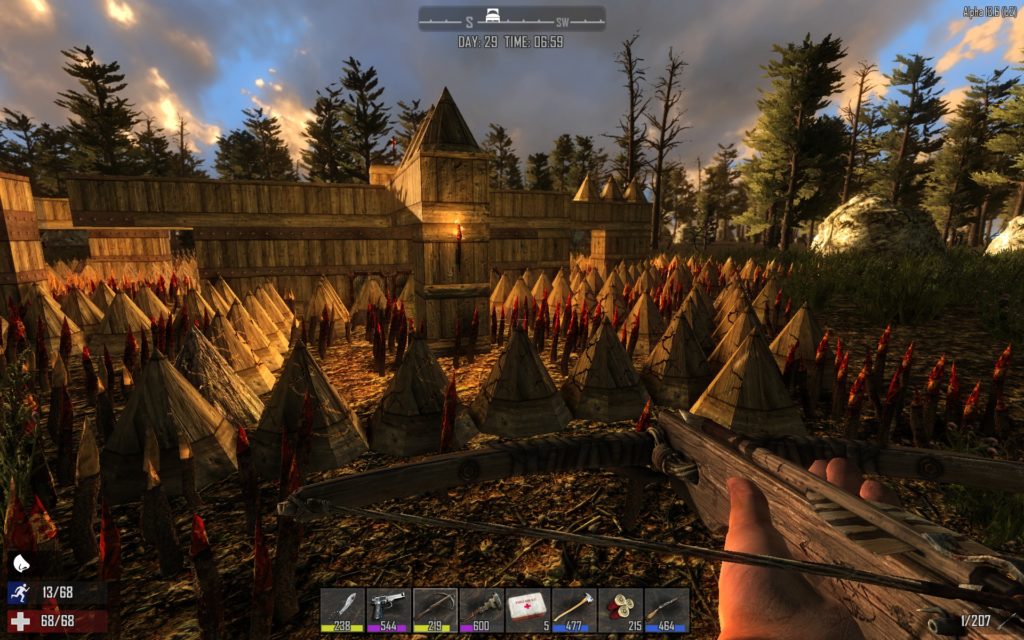 This bring me on to my first issue with the latest version: it looks like shit. 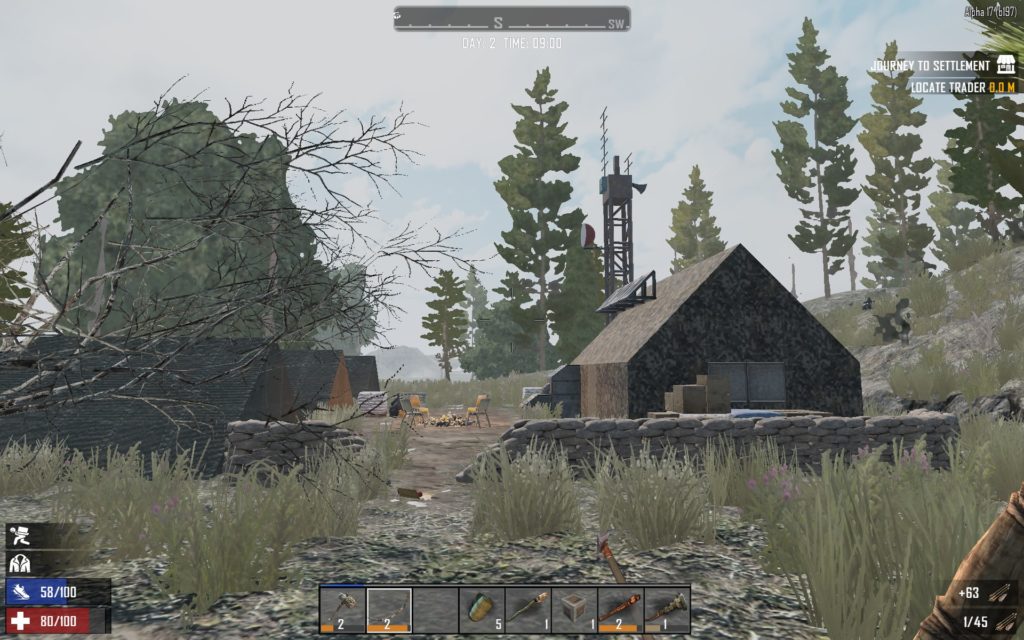 Gone are the flowing models- it looks like they’ve just been sort of shoved in to the world. I would say that the zombie models also seem to have gone a bit backwards in appearance quality. 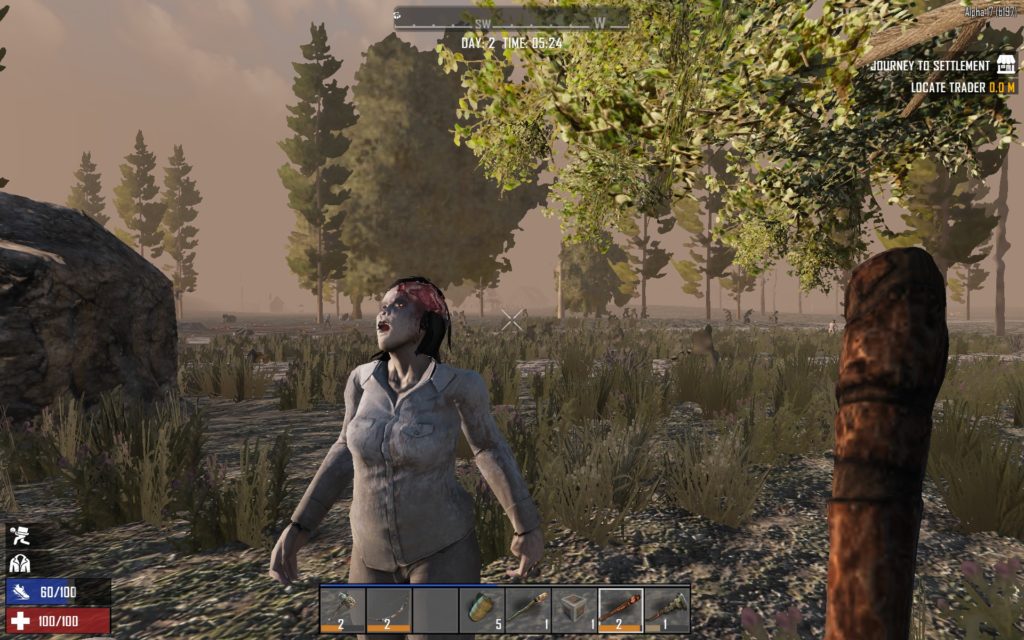 Perhaps this is to do with the graphics upgrades; perhaps the lowest setting models now look like complete shit where once they looked okay, and the high graphics models are beautiful. I couldn’t tell you because my computer couldn’t run in.

Generally, the new experimental release ran well- everything flowed well, other than the bugs I’ll comment on soon. There was one major issue however- going indoors. This just made me lagg. Controls felt slugish and juddery- zombies were incredibly hard to hit with my bow and arrow, I had to kite them outside. Once I was back outside, normal latency resumed. I only tested this with prefabs, I’m unsure if it is present in custom builds.

I played for a day and a half of in-game time, solo, on the default settings. I think that the update has promise, but it’s not quite there yet.

A point on how you start the game: Generating a new map is SO SLOW. It took over 5 minutes of my PC churning away to do so. I guess this is a one off time investment, but it was still a bit lame when I was eager to get in to the game.

Once I was in game I noticed two things. One, you no longer need to immediately worry about clothes- you get a timed buff that makes you immune to weather. 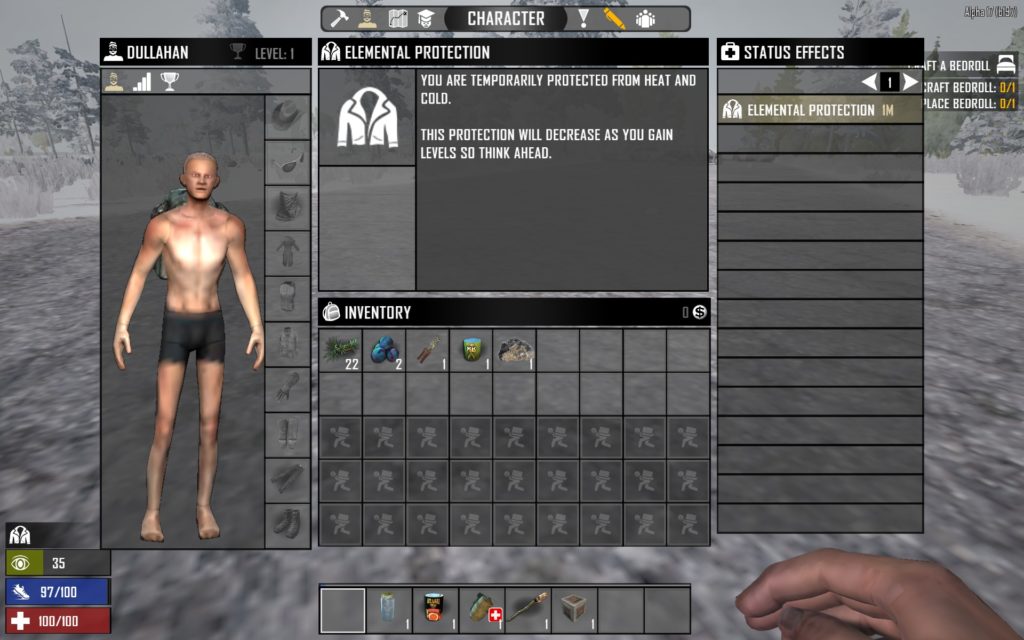 Secondly, spawning safe zones are a thing of the past. 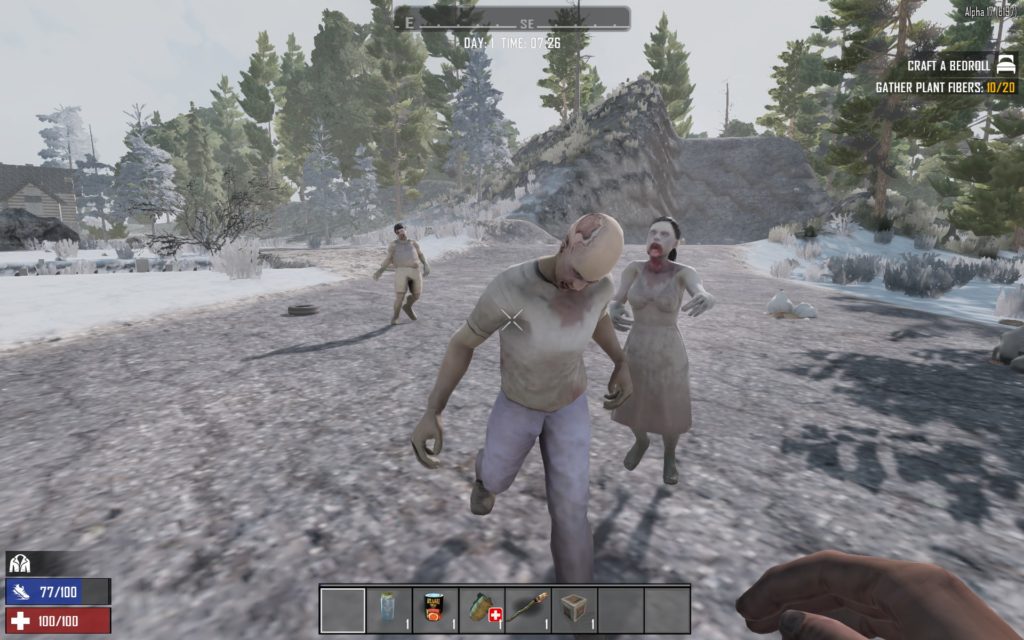 It was quite unpleasant to be chased down by three zombies within 30 seconds of spawning, so hopefully this gets reinstated at a later point.

Another of the first things that I spotted was experience points- you now get experience points for most actions. Even punching the grass gives 2xp a patch. This pales in comparison to the ~700xp for killing a zombie, but I guess it’s something. I suppose the idea is that when you play with friends, it’s viable to have gathering/crafting specialists without them falling behind combat-oriented characters in levels. That said, I’ve read that there is now a party system which allows the sharing of experience points.

The perks tree has been reworked to reflect this specialisation concept. A lot of the existing skills have been reworked, but they have also been categorised by type: Perception, Strength, Stamina, Agility, Intelligence. These are treated as regular perks which points can be put in to, as well as heading up the categories. 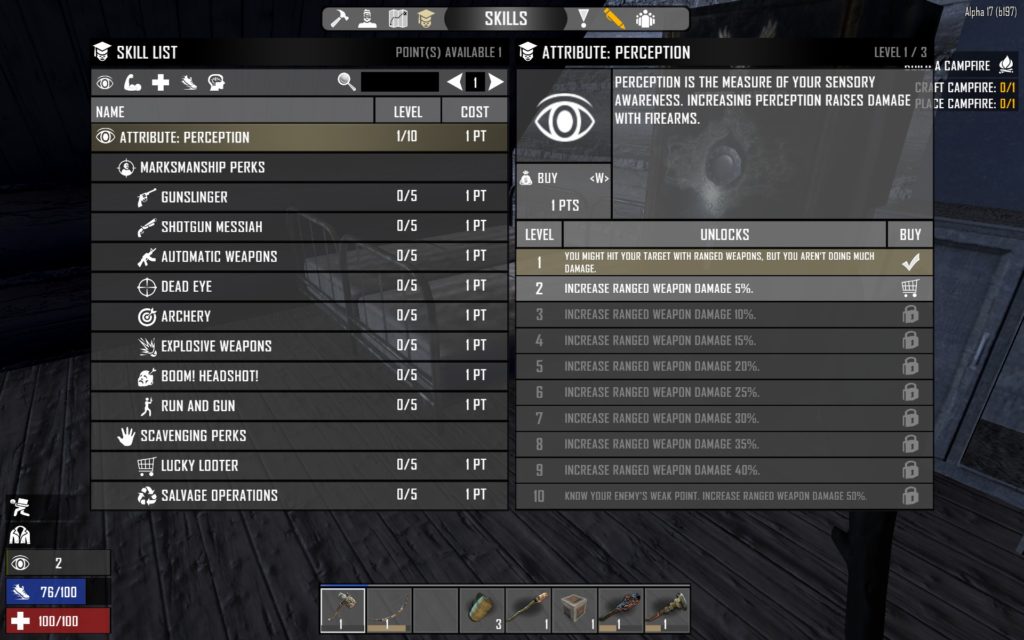 As before, perks have multiple tiers, gated by some requirement (such as level or other skills). A lot of these are familiar, but there are some new ones of interest. 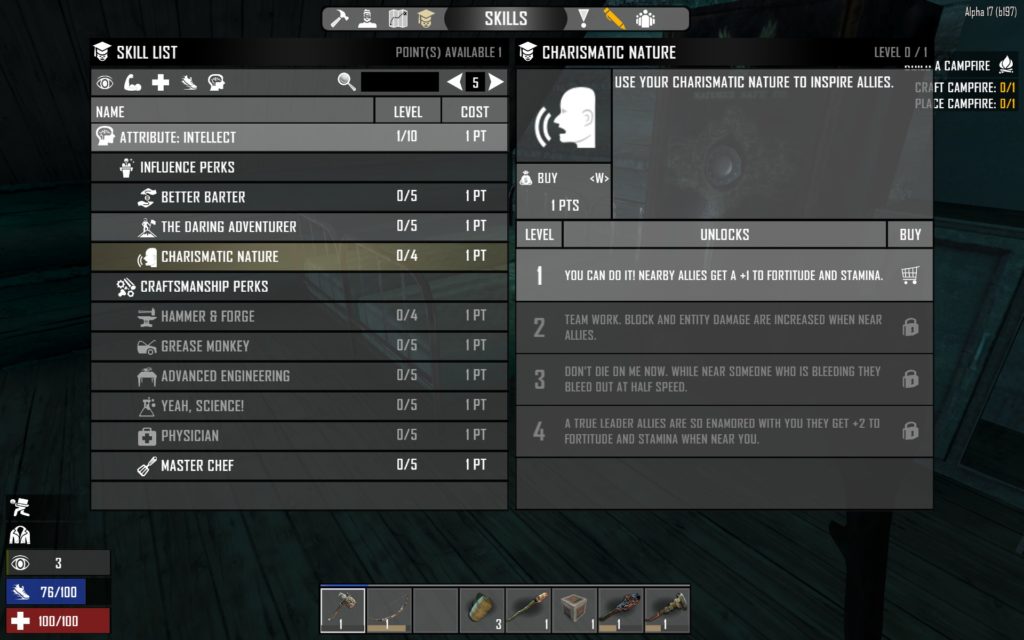 Amusingly, they also seem to have added a stealth build. 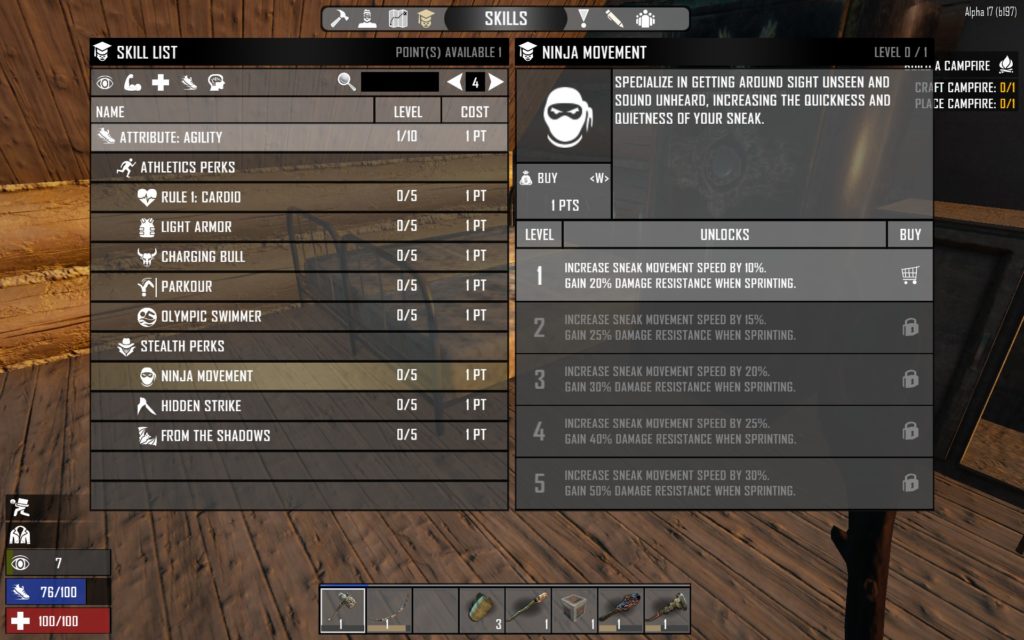 You seem to get 1 point per level up, and additional points for doing quests (completing the initial chain gave me 5 points). Annoyingly, I was unable to progress further in the main quest chain as the location of the trader bugged out and did not display. I assume that the quest NPCs which have reportedly been added lurk near the trader, and so I didn’t find these either.

Combat in this experimental release has changed quite a bit. Overall, I would say that it is much harder. As previously, you want to rush that first bow and arrows. The first thing I noticed here was that headshots are no longer a guaranteed kill (or even knock down). This was made sort of amusing by the new mechanic that arrows have a chance to stick in their targets, with the player being able to pick them up again later. 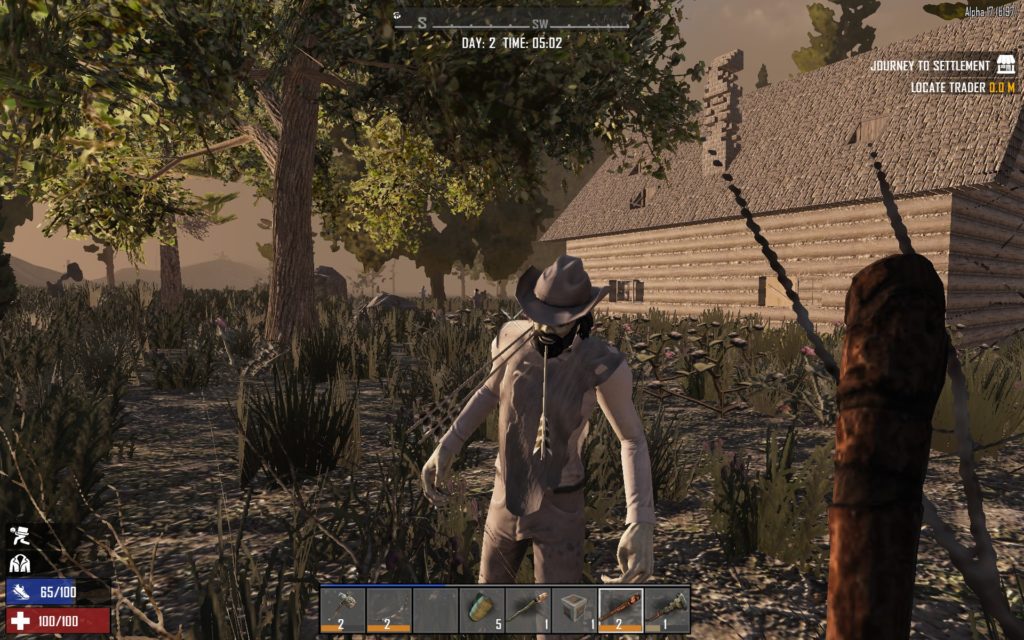 Once you’ve shot a whole bunch of arrows in to your target, it might be knocked down. These knockdowns are not like the ones of old. The zombie will immediately begin to get back up, and there is no apparent damage bonus to downed enemies. It just makes them a little harder to hit in the head. It was still useful for melee kills though, as there was no chance of being hit whilst the zombie was still getting up. Melee was a bit more of a faff, as swinging/punching seems to queue in a weird way. If you click rapidly it plays the noise associated with the action every time, but due to the length of the animation it backs up the action. If you click a few times and stop, your character will swing once and then once again before stopping. This was a bit annoying in combat, as I usually spam click and expect the actions to cease when I stop.

Once you have beaten your target to death, you want to get in there fast to retrieve your arrows. One of the major changes in this update is that zombies are no longer containers; they no longer as default contain loot. They appear to have a low chance (I’d guess under 10% from experience) to drop a bag that contains loot instead, but nothing on the zombies themselves. Probably in part because of this, corpses seem to despawn very quickly after death. 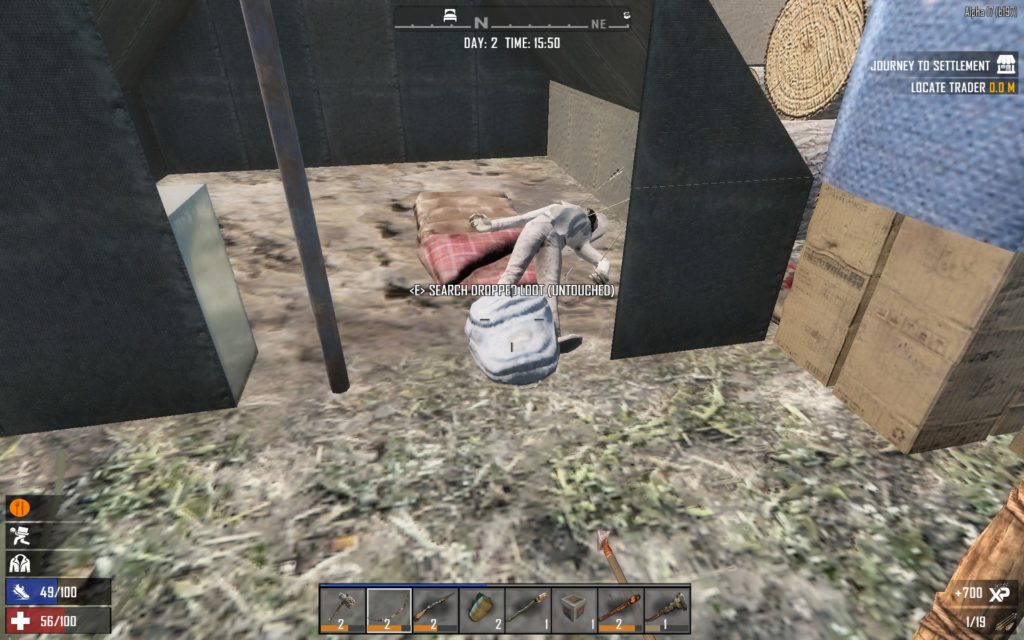 The effect of these changes are that progression seems quite slowed down. Zombies are more time consuming to kill, and they don’t bring you loot. I would not have said this necessarily makes the game harder- just slowed. The zombies do not do anything novel to make them more difficult to deal with. It would be interesting to see how quickly a party can reach “end game”, and if it is as enjoyable as it has been previously (I can see combat becoming tedious unless higher level skills are able to make a real difference to kill speeds).

In addition to the lack of zombie loot, inventory space has been cut, kind of. 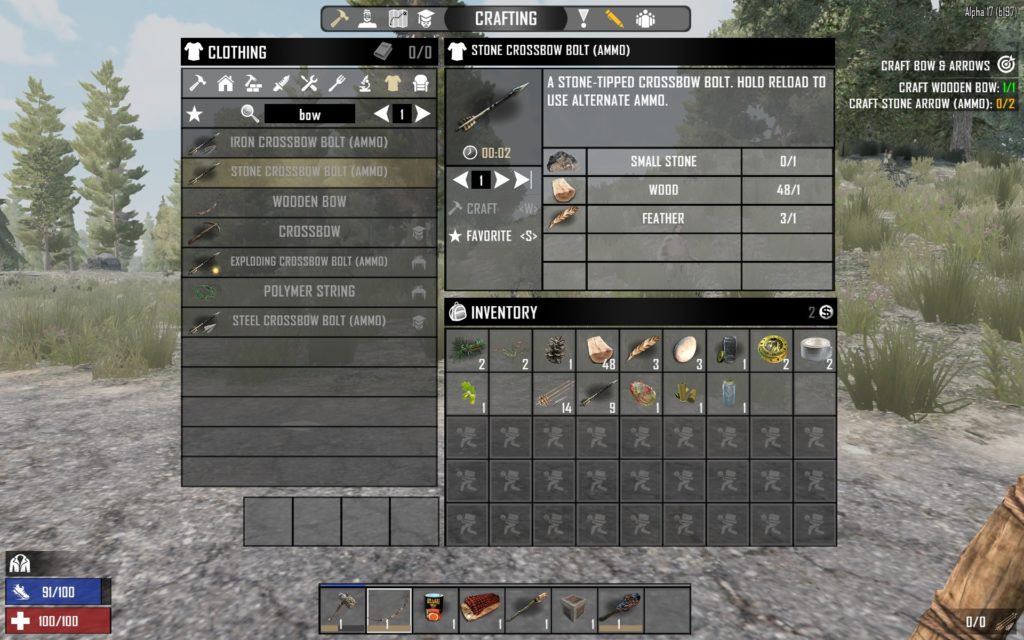 You have 2 rows of slots which are fine to use, and 3 rows which will make you encumbered- mobility is now a % value, and being overloaded will lower it and make you slower. You can extend the amount of regular inventory spots through perks.

Item quality/crafting has been changed up yet again. All crafted item quality is now determined by skills, generating items on a scale of 1-10. Reparing an item no longer seems to lower its quality, assumedly because of the removal of the prior granularity in item quality. It also seems that clothing no longer gives you resistances of the various types. 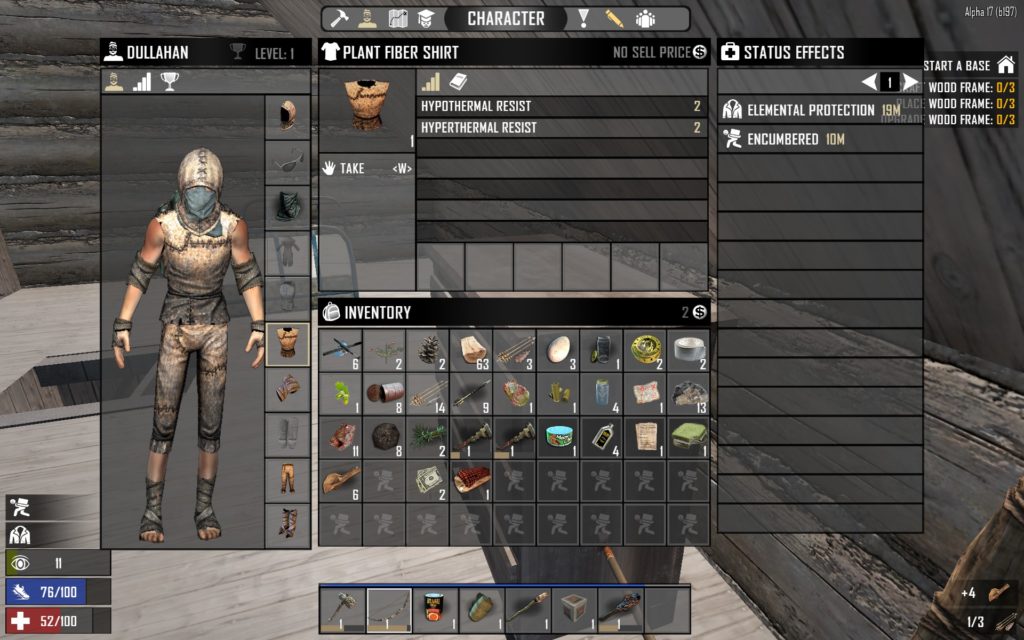 Clothing is for temperature resistance, and no longer provides protection against damage, radiation, etc. You can still craft chest/leg armour and helmets, which provides you with some armour whilst lowering your mobility percentage.

Something that people will be happy to hear, sleeper zombies appear to be fixed. They can still spawn standing, but they no longer appear to respawn (or just plain spawn) randomly once you’re inside the building. Just to be mean, it appears that zombie vultures are now sleeper mobs in campsites. 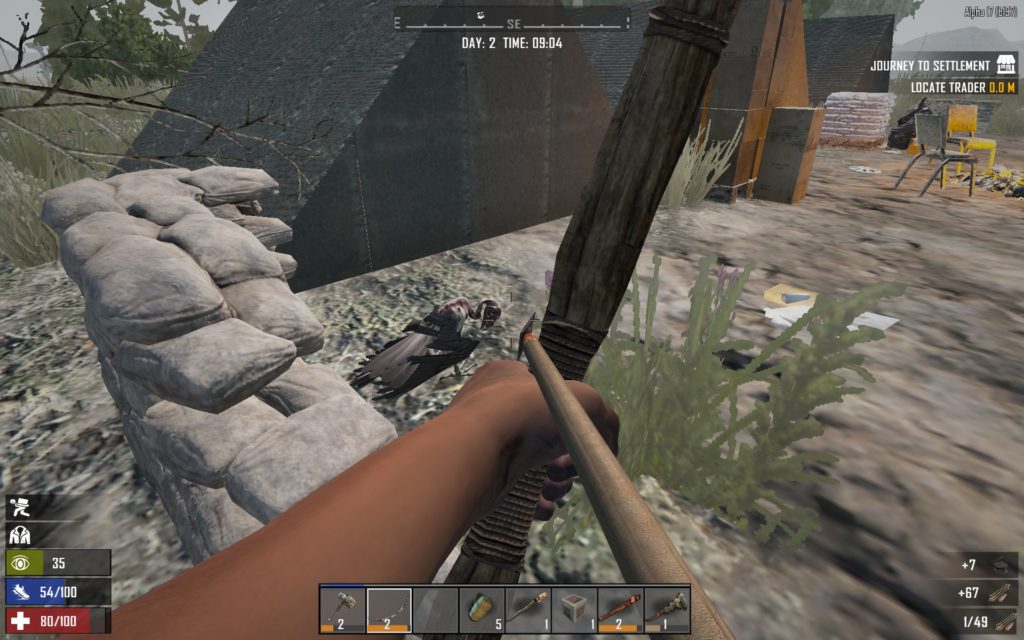 Incidentally, bleeding is now awful as it applied a visual overlay that makes everything annoying. 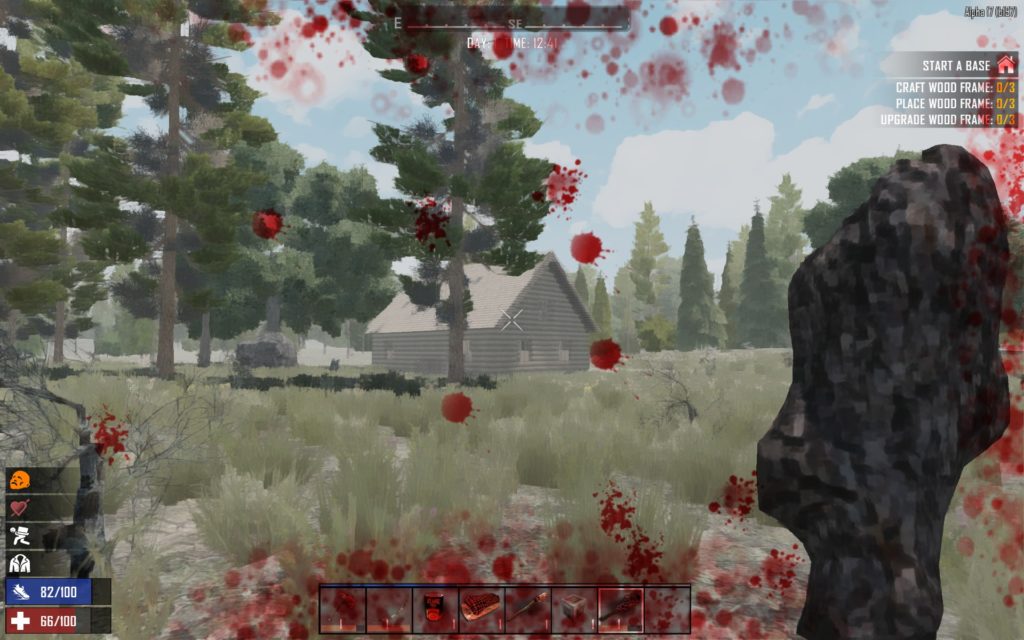 There is also a distinct lack of bandages around when zombies aren’t bringing you their clothes for scrapping. My advice? Get in to a house and scrap a sofa. Vultures appear to be in EVERY camp site prefab (often several of them), and so you will need them. Thankfully it seems to be as easy to make them bleed as it is for you to bleed, so you just need to land one or two arrows and then leave them to it. 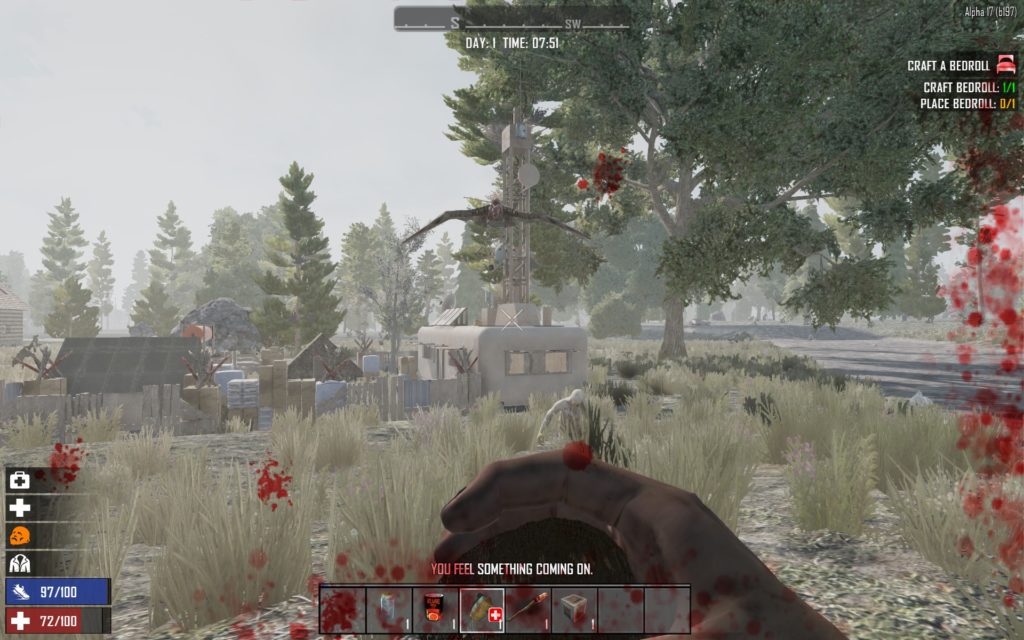 In my short play of the update, I mainly ran around woodlands. I encountered two new prefab campsites that I hadn’t seen before, so it’s cool to see that there’s a lot of variance in new models. There also appears to be an addition of more hidden loot, kind of. With how terrain meets in 7 Days To Die, it isn’t really that well hidden.

It’d probably be a bit less obvious indoors, so break those floor patches when you see them!

Approaching one of the campsites I spotted, I noticed a slight issue with the game’s draw distance. 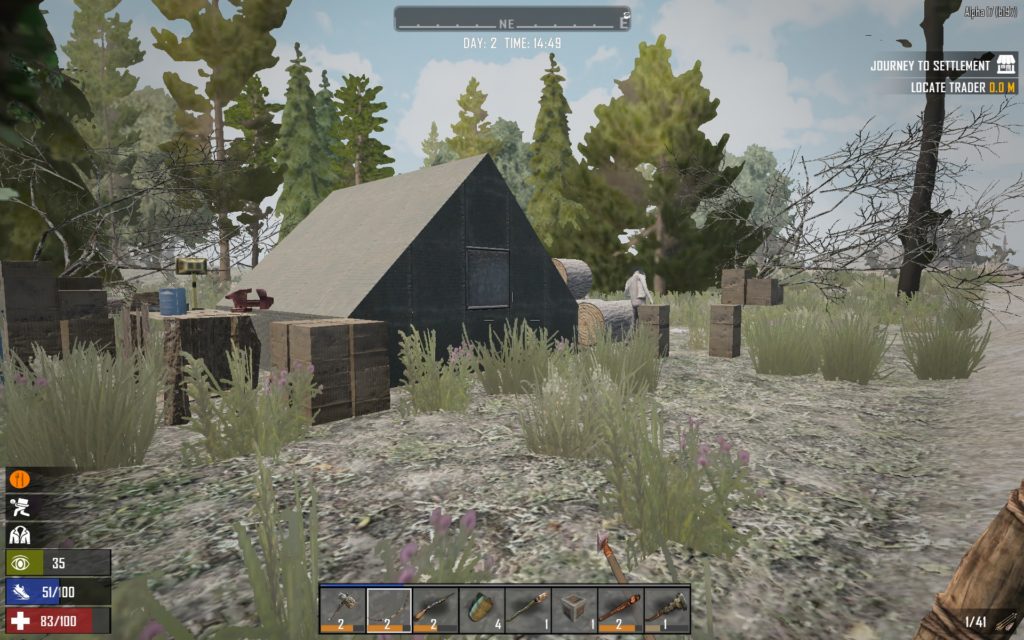 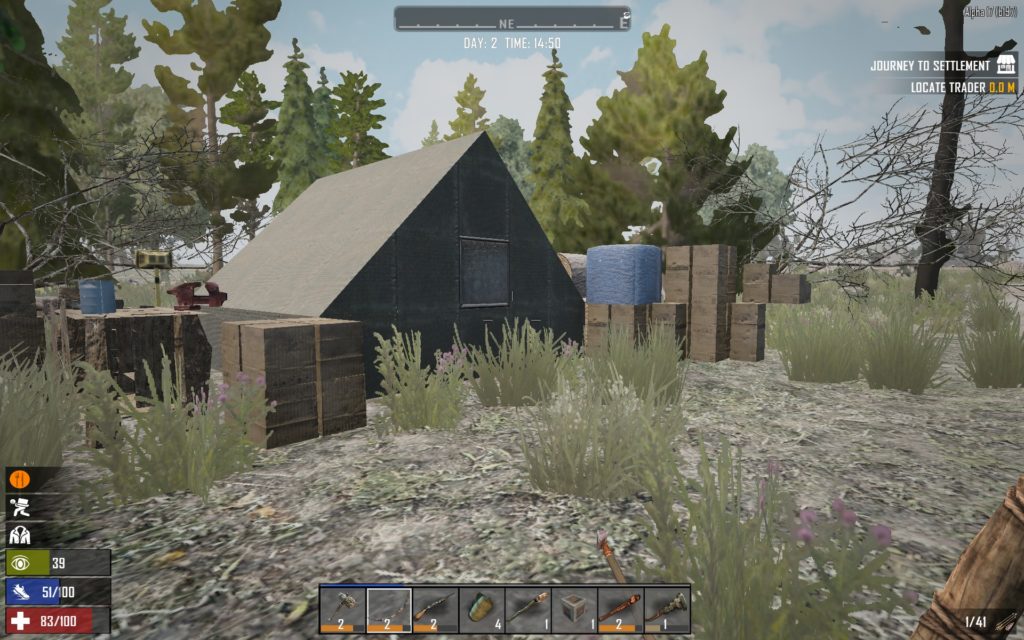 As much as I appreciate the heads up, I’d still rather zombies be surprises really!

Conclusions
-My first thoughts on this patch? It has a lot of potential. As it’s an early experimental build, it’s likely that a lot of the gripes I had will get ironed out. Some of the smaller issues (dying not restoring hunger) will probably remain, but the major ones should get better.
-Hopefully if the indoor lag issue gets fixed I’ll be able to jack up my graphics settings a bit and see if it still runs well. The appearance of the game was honestly off-putting, as I know how beautiful the game is capable of looking.
-The new combat system is interesting, though it has the potential to become very tedious if perks don’t speed it up. It could slow overall game progression though which I am a fan of, as I find that I reach “end game” more quickly than feels reasonable at this point.
-I’d love to see the new NPCs, if only I could find them!
-Seeing other new mechanics (such as addiction) in action will be pretty cool
-I’m very happy to see that there are new prefabs, and I look forward to exploring them all.
-I need more friends to play this with!