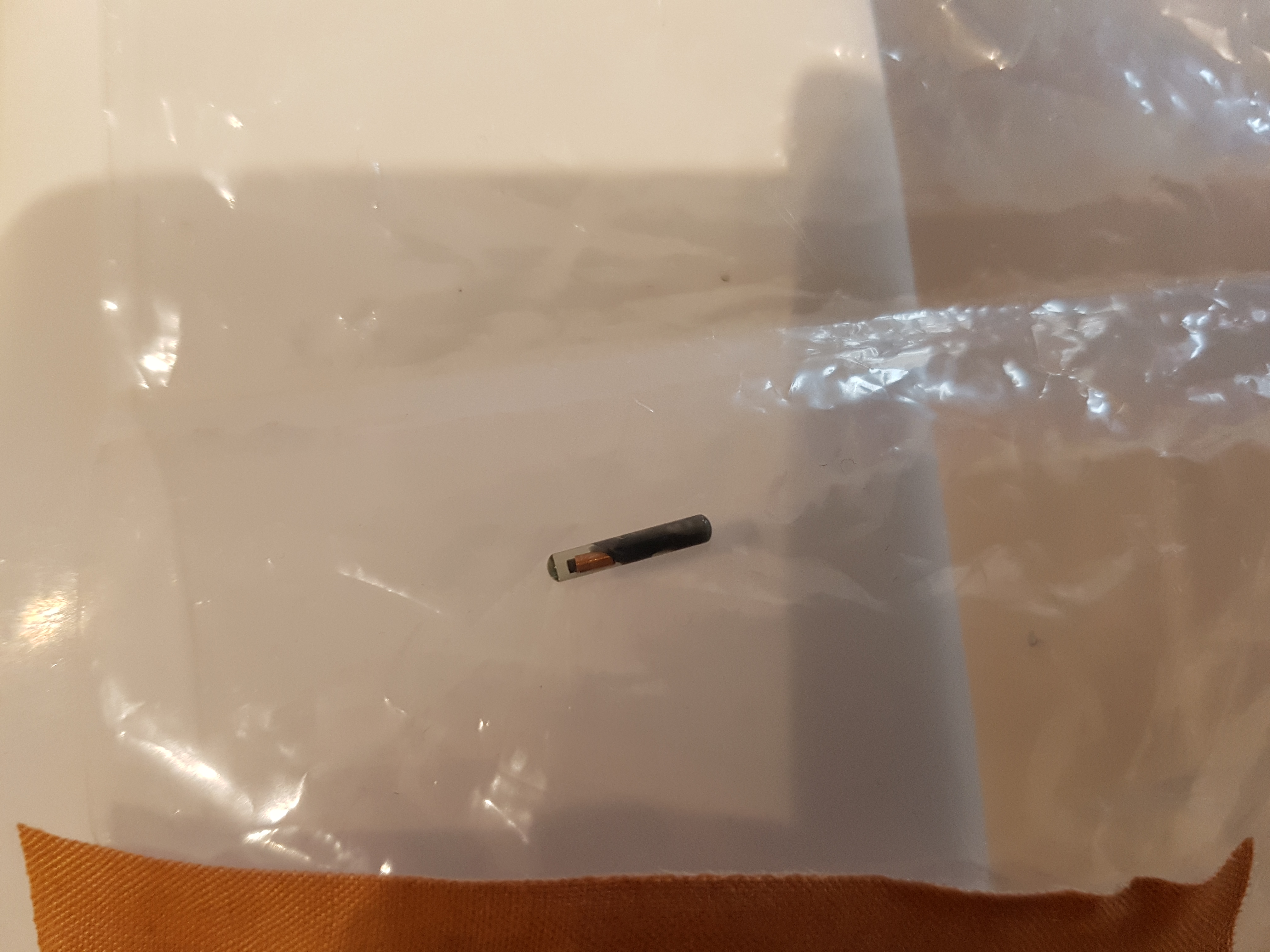 The tale of an NFC chip and DIY surgery

Published by Vic Harkness on November 7, 2018

I’ve previously talked about the magnet in my finger, but that’s not the only implant I had. I’ve also had an NFC chip in the webbing of my hand between forefinger and thumb. This was largely done on impulse, although I’d chatted a bit about it to people before.

At DEFCON 2018, I spotted a Biohacking Village on the map. I’m quite interested in this field and so I headed straight for it. One half was for discussing vulnerabilities in implanted medical devices, and the other was for biohacking more directly- you could get an NFC or RFID chip implanted in your hand for $50 a pop. To me this sounded like a grand idea and so I joined the queue.

Once I made it in I saw that the installation was to be done with a heavy-gauge needle- less destructive than the magnet, though I would have been up for it still. The lady that did my implant said that there were plans to do magnets next year though! The needles used here made part of a kit which as it turns out you can purchase online. The website Dangerous Things sells all that you need for $99 (https://dangerousthings.com/shop/xnti/), so $50 seems like a good deal!

Again, everything was very sanitary here- cleaning the implant site, all new equipment, etc. They did however also provide a numbing swab over the skin, which was a novelty. I ended up making friends with someone whilst waiting in the queue, who was getting NFC in one hand and RFID in the other. He let me take pics during his implantation: 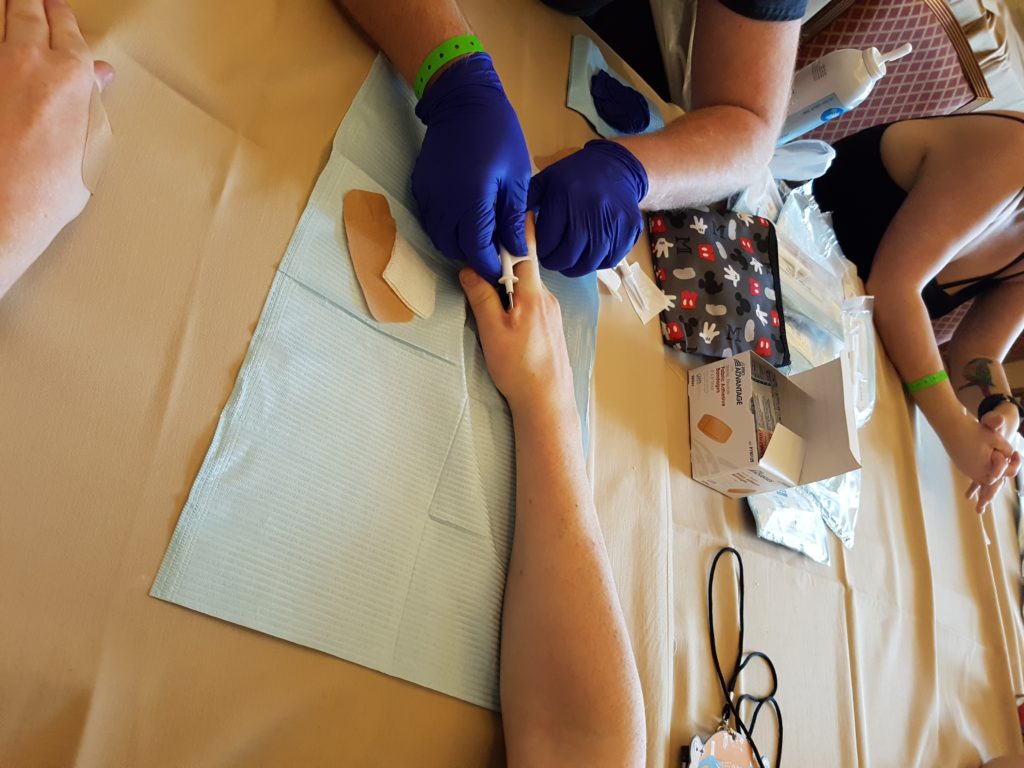 And took a picture of mine as it was going in: 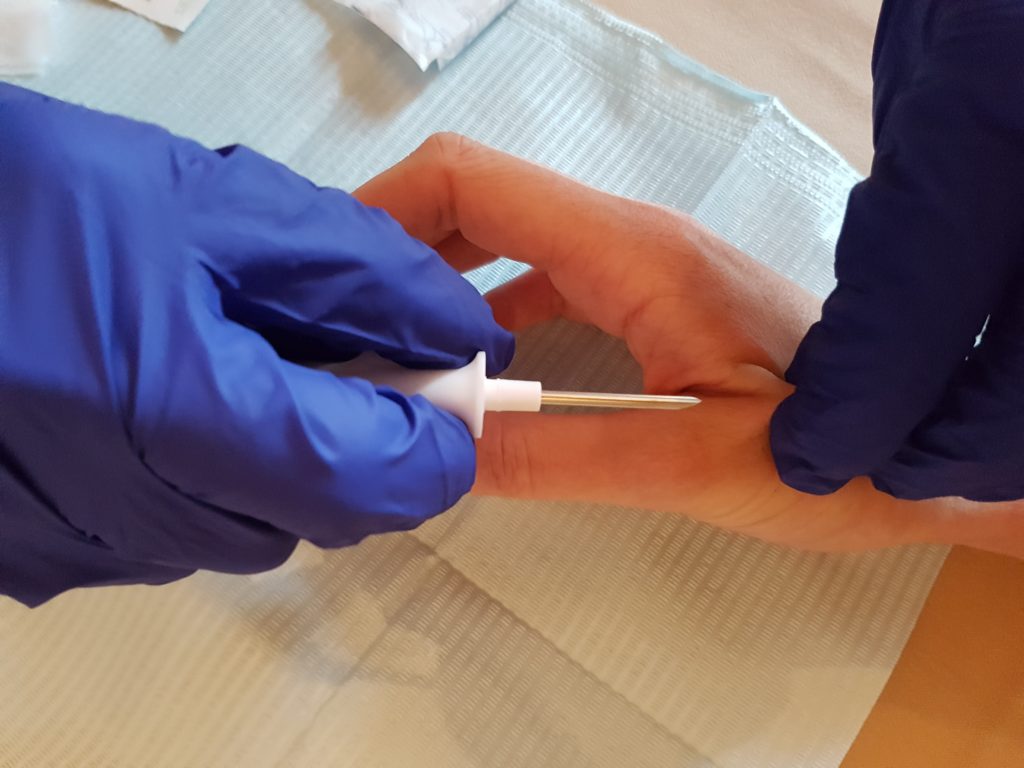 Despite the width of the needle, it actually hurt less than I thought. This was apparently up for debate as my new friend ended up with his second implant slightly incorrectly positioned due to flinching. There was very little blood, and a very neat hole: 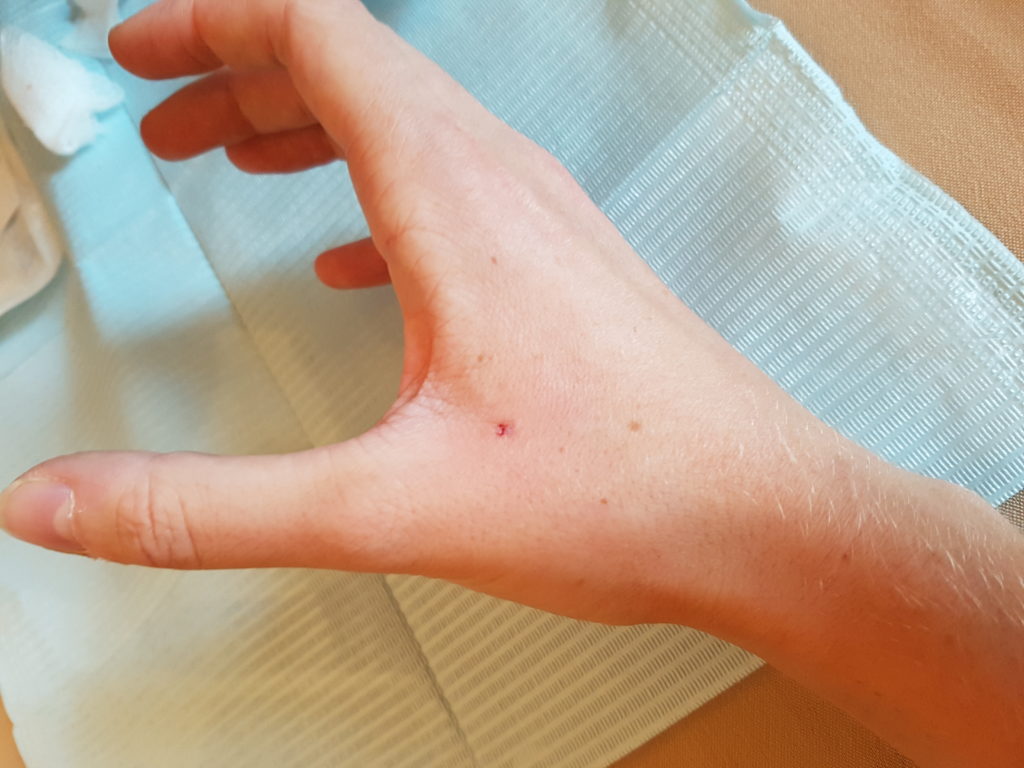 So, implant done! What next? In true Vic style, I was immature. The chip that I had implanted was an NTAG216, meaning that I had 888 bytes of data storage to play with. My phone is NFC read/write capable, so I grabbed an app to push data to it. A little research online found that I could get all sorts of fancy things on it- I could use it to store passwords, to store health data, it could be paired with other devices (such as physical door locks and device locks), there are a whole lot of options. In the end I put a URL to a meme on it and the text string of “Delivery Boy” as an homage to Futurama.

I did have plans to use the chip to automatically unlock my phone when it was held in my hand, but unfortunately my place of work shit a proverbial brick over the implant. Pointing out that it was comparable to a bank card fell on deaf ears, as did any rational explanations of the security implications. I was informed that the chip would need to come out. Going to the hospital seemed like a waste of mine and a doctor’s time, and I was too stingy to pay the person that put in my magnet. Due to the weird legal issues surrounding this area, I decided that the best option would be home surgery.

I was able to grab all of the things that I needed online- scalpels, gloves, surgical spirit, etc. On the day of the surgery I roped a reluctant friend in to being my nurse, to provide an extra pair of hands as needed. I also decided that I would take out the birth control implant that was in my arm- I’d been meaning to get it out anyway, and I figured that I’m already doing some home surgery so I may as well go for it.

As I’m right handed and the NFC chip was in my right hand, I decided that it would be better to do the birth control implant from my left arm first. I cleaned up the site, and made my first incision. From a psychological standpoint, it was quite interesting. Before I started my hands were shaking, and I was certainly struck with thoughts of “I’m an idiot, why am I doing this?” This continued for the first cut, and my further cuts to try and reach the depth of the implant. Once I reached the implant, I discovered that it had grown in to the fat of my arm- it had been there for a couple of months now. I realised that I would need to somehow get in to this capsule of yellow fat. At this point, something odd happened. To my brain, it became a technical problem. The anxiety fell away, and I returned to a usual level of steadiness. I had my friend apply pressure to the opposite end of the implant, tilting the fat capsule out of the incision. I was able to cut in to it and pull out the implant with (brand new, sanitised) tweezers. I then cleaned out the wound with surgical spirit (again, not noticing the pain at all) and closed it up with butterfly stitches (note: butterfly stitches are incredibly fiddly, would not recommend). Me being me, I asked my friend to snap a pic of me and my implant: 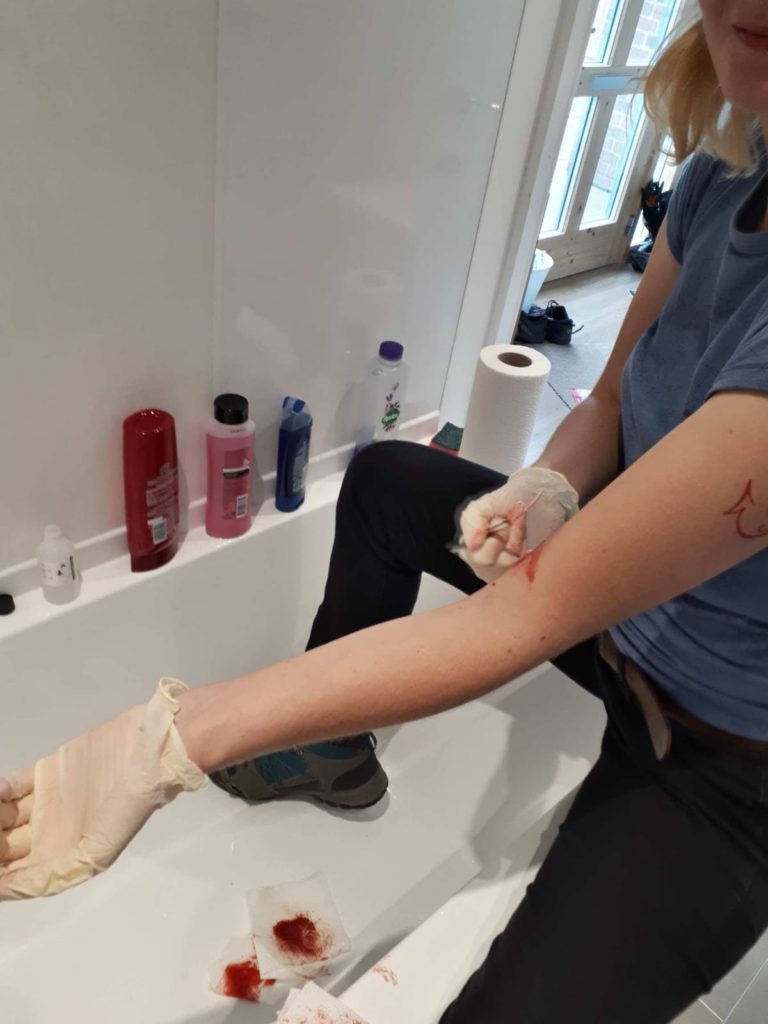 Next up, the NFC! I first put a band around my wrist and flexed my hand to encourage veins to pop up, so I could check their positions relative to the NFC chip- a prior Wikipedia investigation had suggested that there was likely a vein nearby. I discovered that there was indeed a vein nearby, but not directly where I needed to be cutting. Following the same procedure as before I made my incision (a little more shakily as I was using my non-dominant hand), and cut down to the level of the implant. This was a lot easier this time as the NFC chip was slightly tilted, with one end being only just below the skin. Because of this I asked my friend to snap a quick pic before I popped it out: 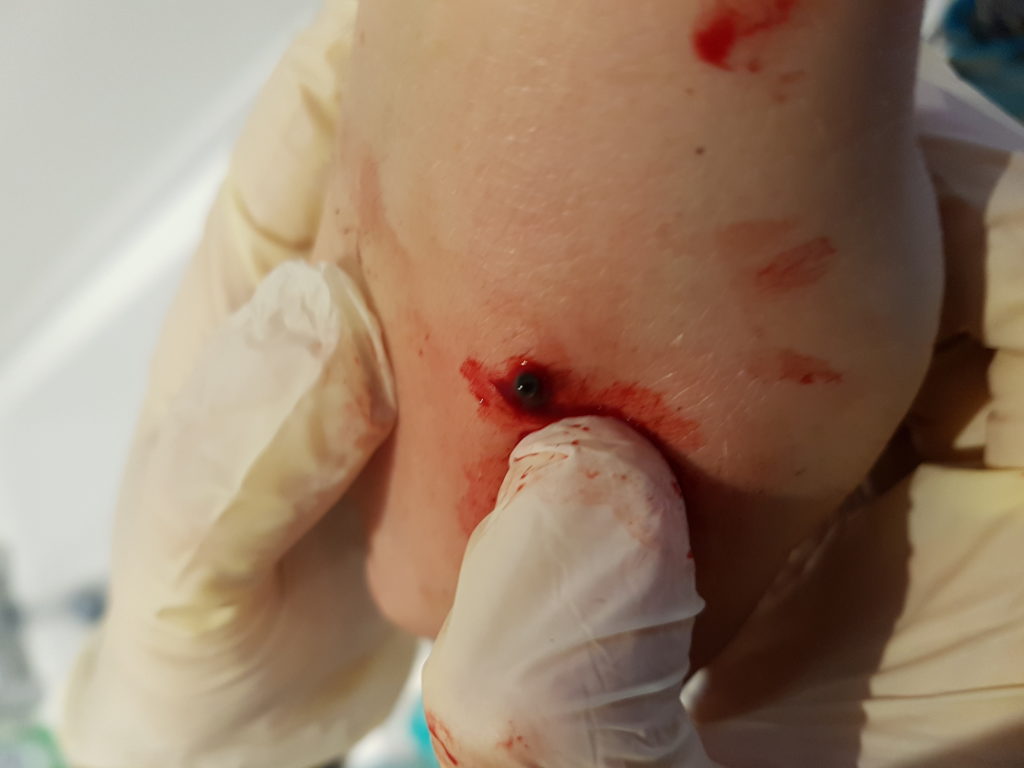 Here’s how the incision looked: 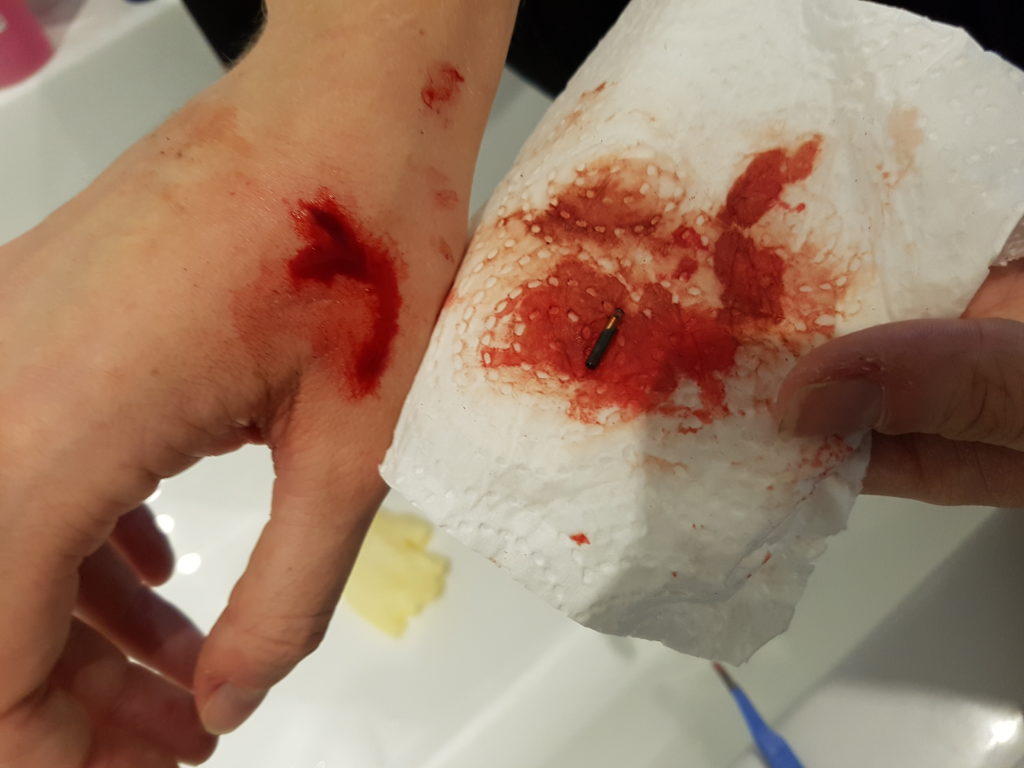 Again, I cleaned and patched up the incision. 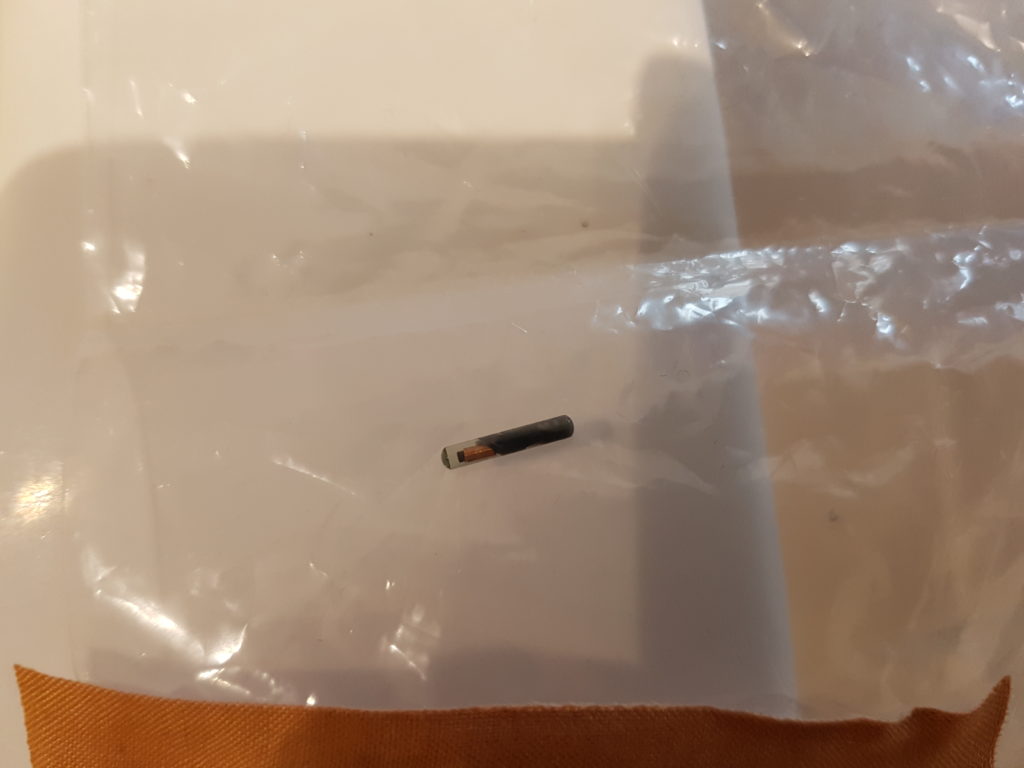 People seemed surprised by how big it was! It was quite cool that the biocompatible plastic capsule is transparent, I was able to see the aerial in there. The NFC chip now lives in a little plastic baggy on my desk- I might frame it at some point. Both incision sites have healed well, leaving only small scars. I think I might have missed my calling as a surgeon!