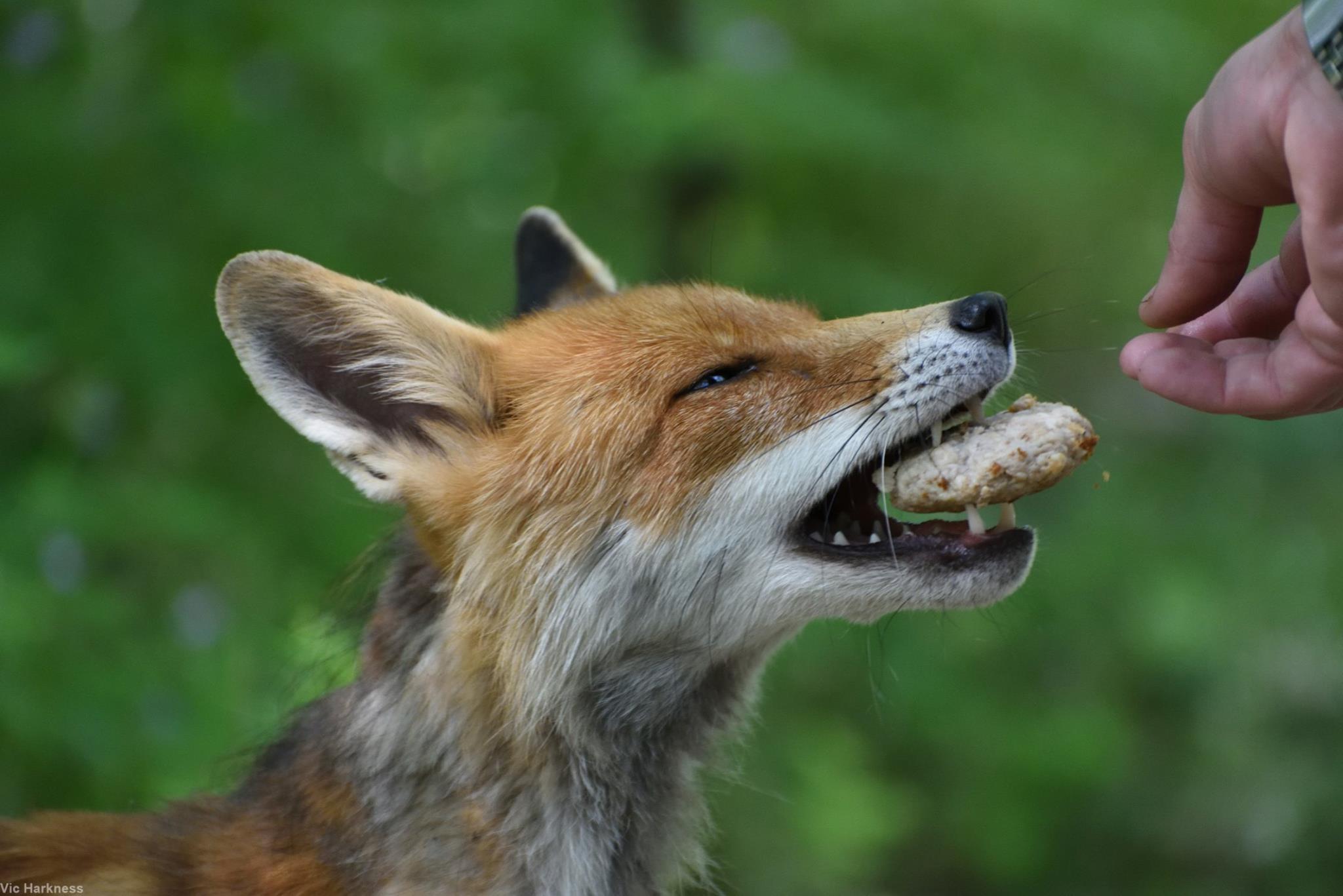 Wildlife in the zone

When you think of Chernobyl, you assume it’s going to be absolutely teeming with wildlife. After all, there are no humans to disturb it! I’d read posts saying that there are all sorts of animals living in the zone now, from the expected dogs/wolves and deer to even moose and lynxes. Our guide said that these are rarities, and that most animals stay far away from the old human settlements, so we should not get our hopes up. He also said that dogs are quite common around the settlements, but to keep our distance from them as they tend to be hot-spots of radiation. Apparently during the clean-up operation of the zone, most animals were killed. Their furry carried the radioactive dust well, and as the animals traveled outside of the zone they carried radioactive material with them. Entire teams were assembled, dedicated to hunting out all the animals that they could. Because of this, there is little ambient wildlife in the zone. On my trip, I think that we were quite lucky!

At the 30km exclusion zone checkpoint, we stretched our legs while our guide sorted out the paperwork for us to be able to enter the zone. Around here, we noticed that there were several families of house martins, complete with nests. 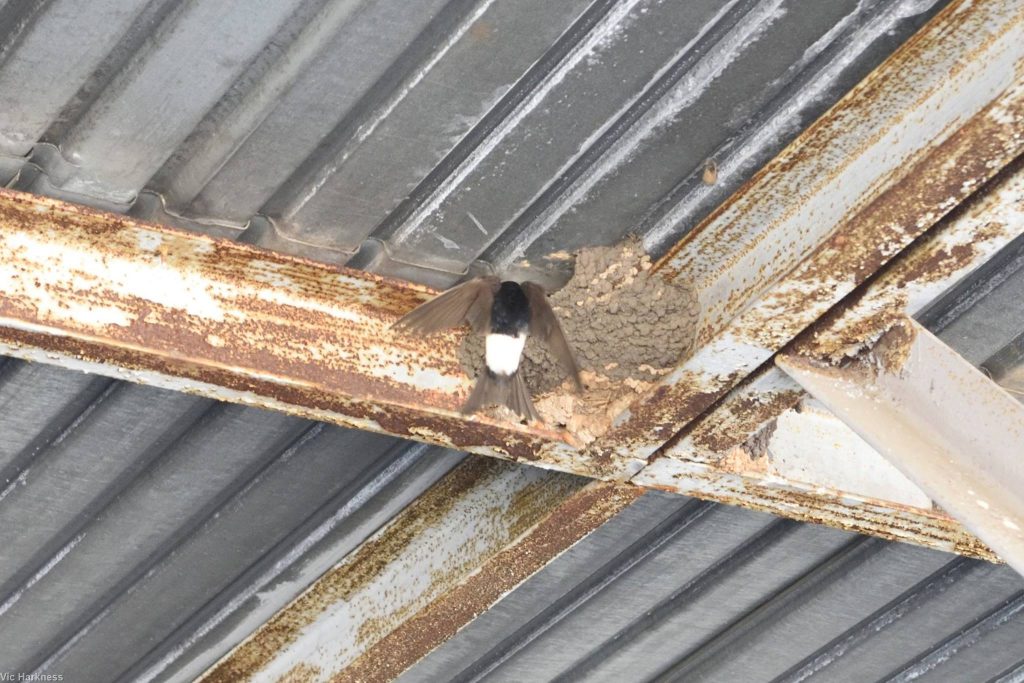 These became quite a common sight around the zone, living on many buildings in Chernobyl and Pripyat. There were also various insects around the entrance to the zone, but these were unremarkable.

One of our first stops in the zone was to an abandoned nursery. This was as you’d expect quite a creepy sight, and I will certainly write a bit more about it in future posts. Living within the nursery however are quite a few large insects. I’m told that there is a hive on the outside walls of the building, although I’m not sure if it it the bees or the wasps living there. 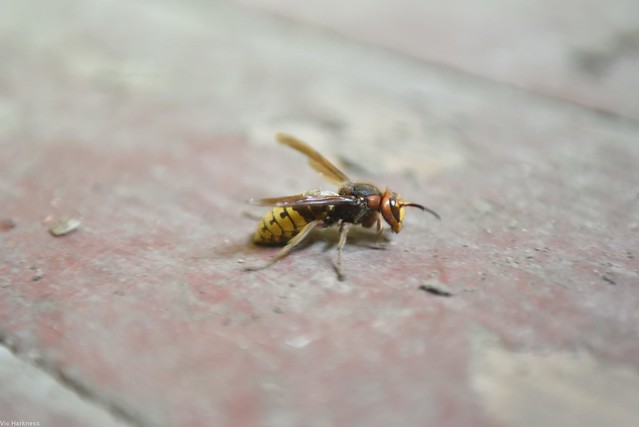 This wasp was crawling around the floor, and was quite massive. To provide a sense of scale, my phone is 5 inches long. 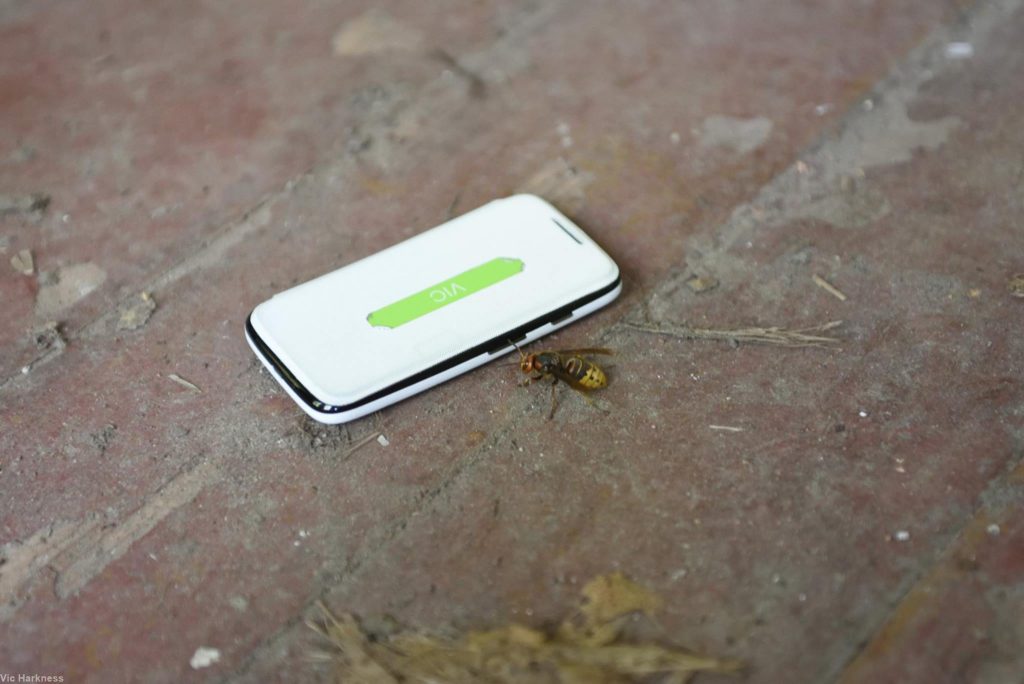 On a nearby window-ledge was what I assume is a large bee. 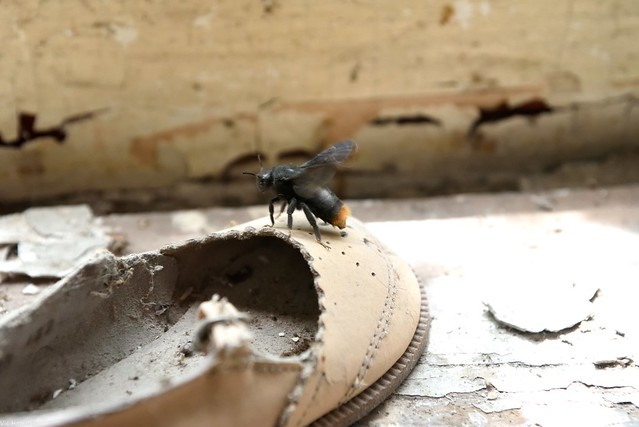 There were numerous bees and wasps around the nursery. Perhaps I’m just mis-identifying them and they are both the same species. Either way, they were huge compared to what we get in the UK.

A bit later in the day, we headed in to Chernobyl for lunch at the canteen where plant workers are fed. There were numerous pigeons sat outside, lying on the floor and sunning themselves. 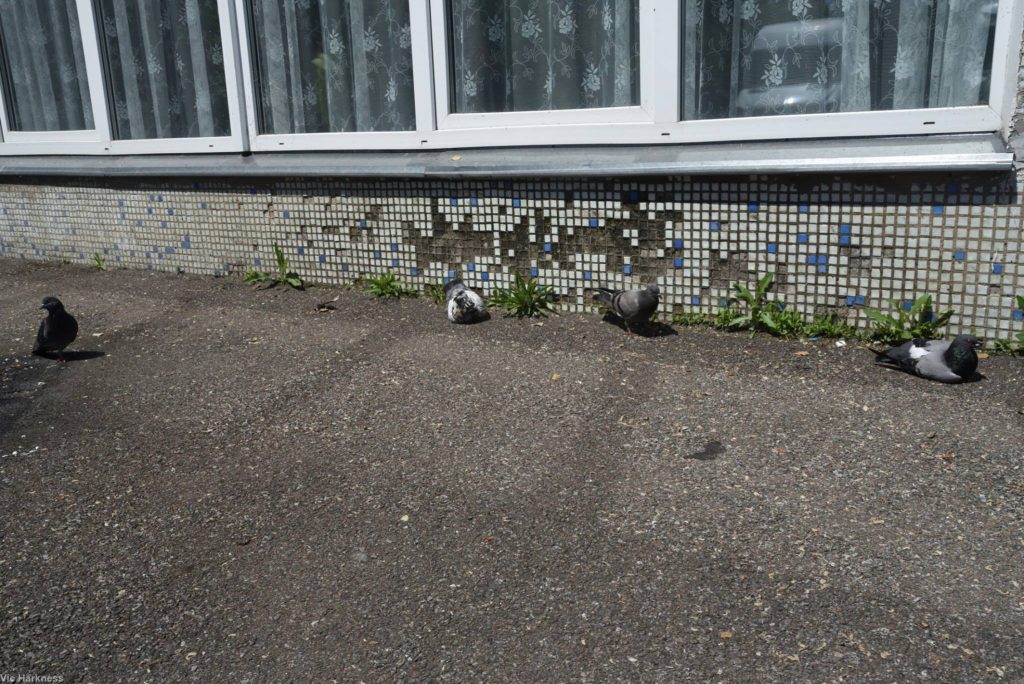 There were also various dogs begging outside, some having more luck than others. 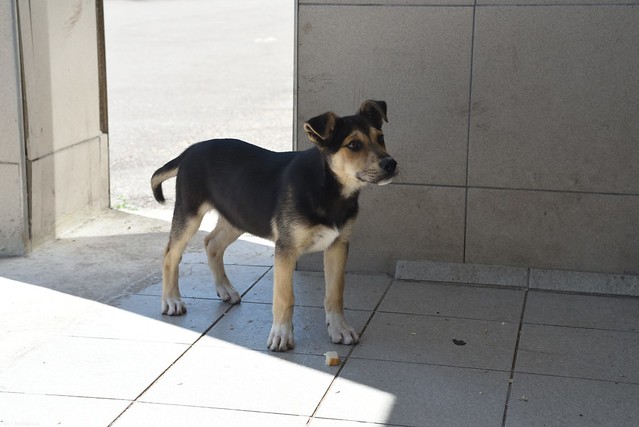 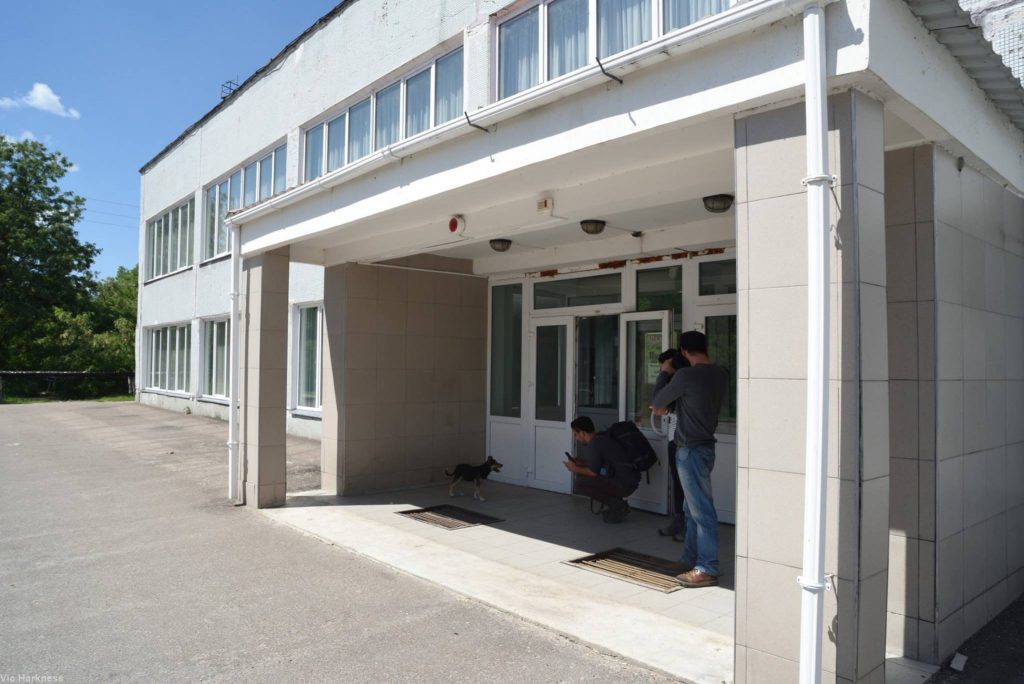 We didn’t see any other animals on the first day, apart from various dogs around Chernobyl. As it turns out, radiation levels are now so low in Chernobyl that there are now hotels, allowing visitors to stay the night. A quick walk around the town in the evening led us to meet many more dogs, all of whom were quite eager for attention. 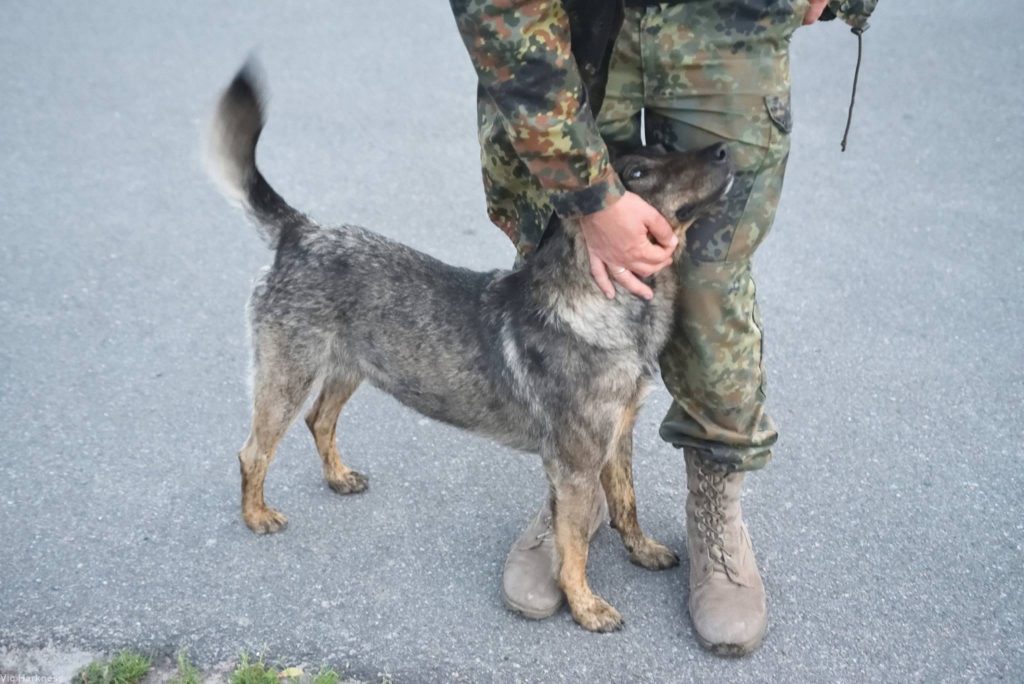 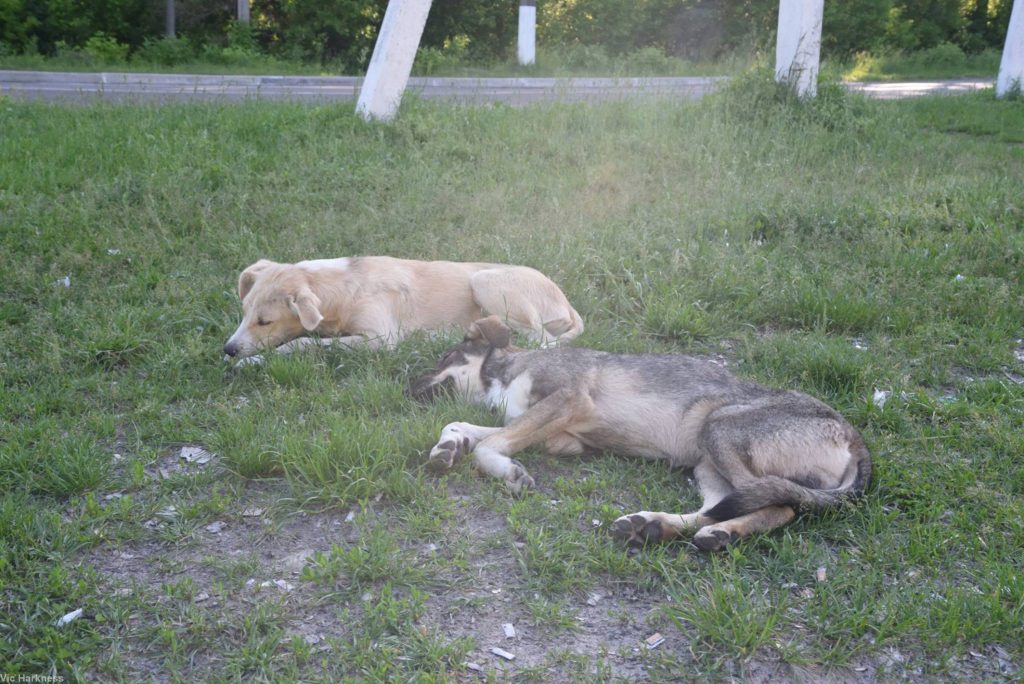 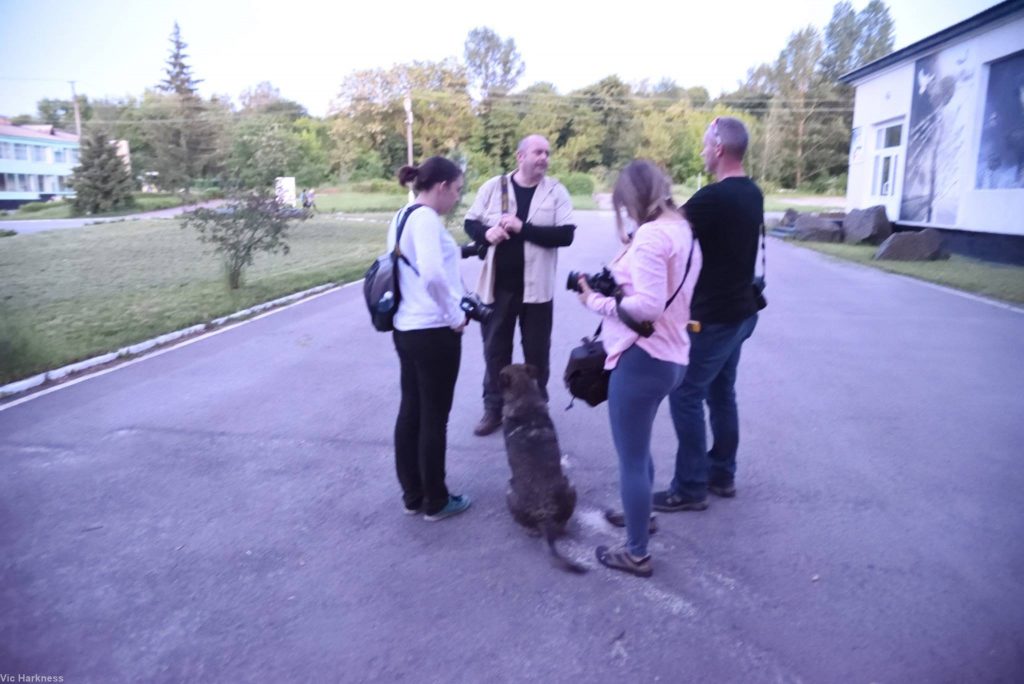 On day two of my stay in the zone, we spent the morning on a tour of the old power plant. This took us up close to the outside of reactor 4, where they are building the sarcophagus intended to help contain the radiation. 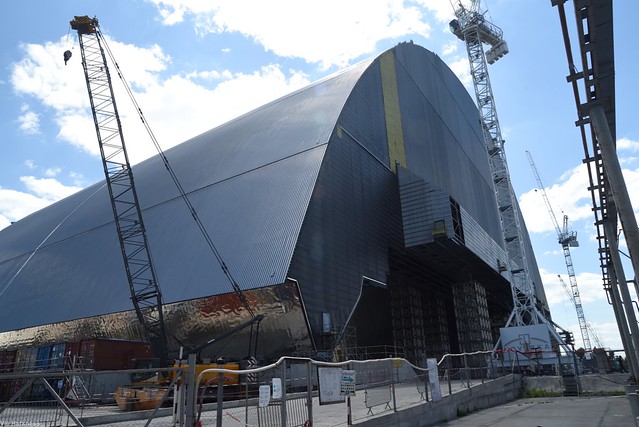 Perhaps because there are many people working in this area, there are many dogs. There appeared to be holes in most fences which allowed dogs a way in/out of the site. Most of the dogs looked to be in decent condition, although we did see one which appeared to have some sort of eye infection. 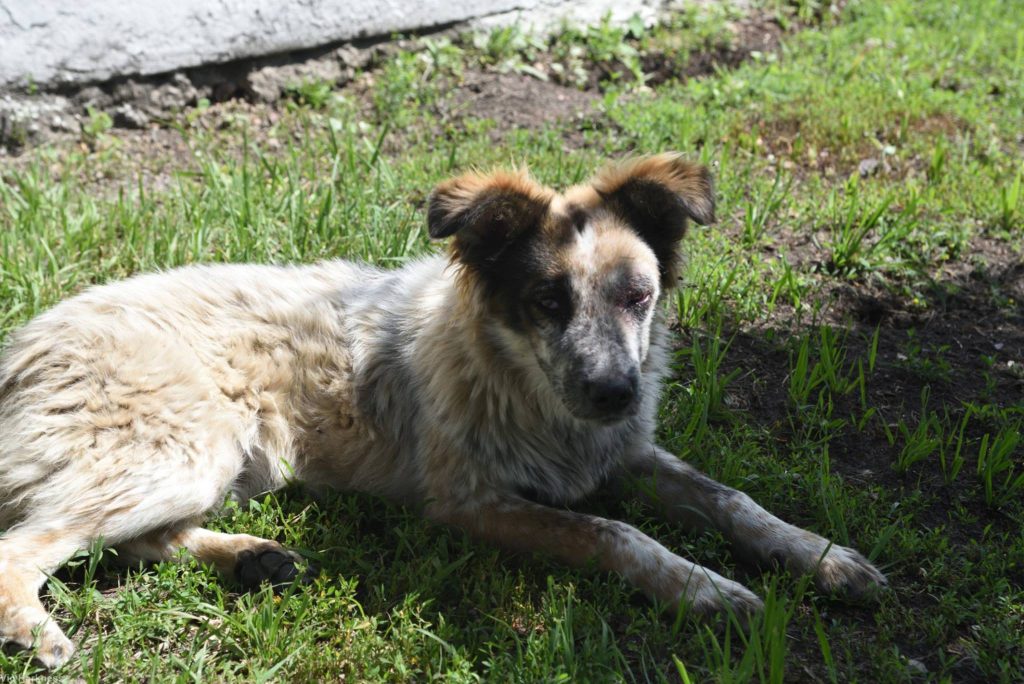 As no-one cares for these dogs (aside from workers feeding them occasional scraps) it seems likely that has just been incurred from an untreated injury rather than being anything to do with the radiation. That said, the dogs were able to wander quite close to the reactor building where there are surely many hot-spots of radioactivity.

Around the zone there are many rivers and lakes, which appear to contain many fish. In the river running next to the plant however there are catfish. Large ones. We saved bread from our lunch, and attempted to lure some out with it. In this endeavor, we were successful. 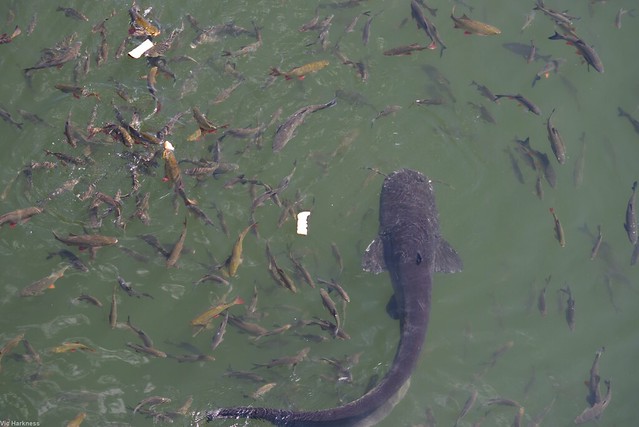 Although by catfish standards these fish were not fully grown, they were still quite impressive to me. Someone threw in an entire bread roll (about 6 inches long) as a joke, and one of the catfish managed to eat the entire thing whole. 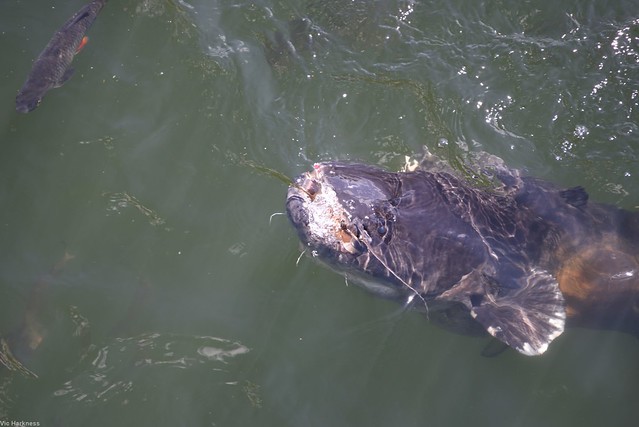 The other fish tried to eat some bread while being quite careful to keep their distance from the catfish. After seeing the catfish eat the entire bread roll, I do not blame them.

After feeding the catfish we headed back in to Pripyat to look at some buildings of note. Coming out of one, a member of our group spotted a fox in the forest. Once the fox spotted us, instead of running away it came out of the woods and stared at us expectantly. 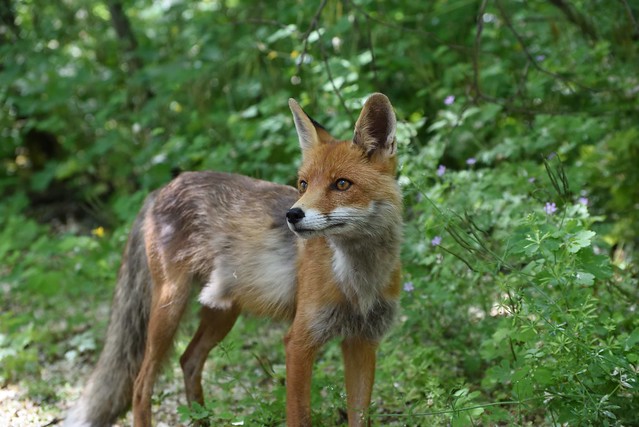 Another tour group happened to be nearby, and a member of that group brought out some food. This caused the fox to approach, and it seemed all too happy to get fed. 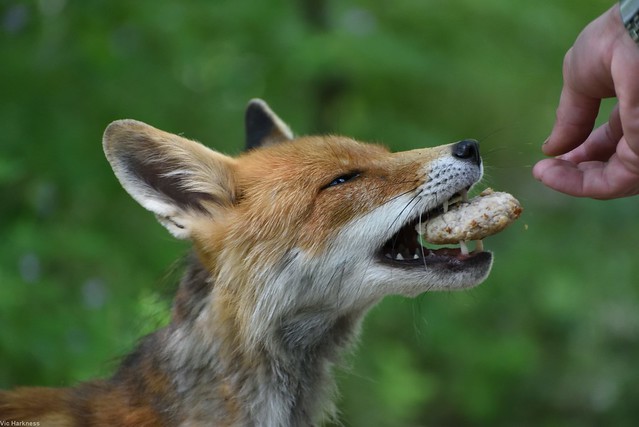 Our group did not have any snacks, although we did have milk (for tea, as we are British). This was put in a cup and held out to the fox, which the fox again seemed quite happy with. 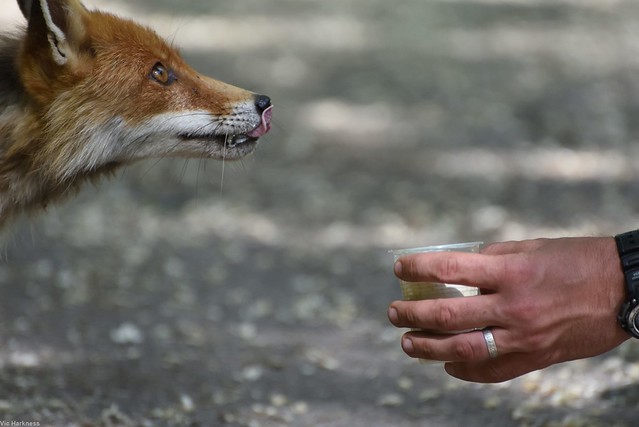 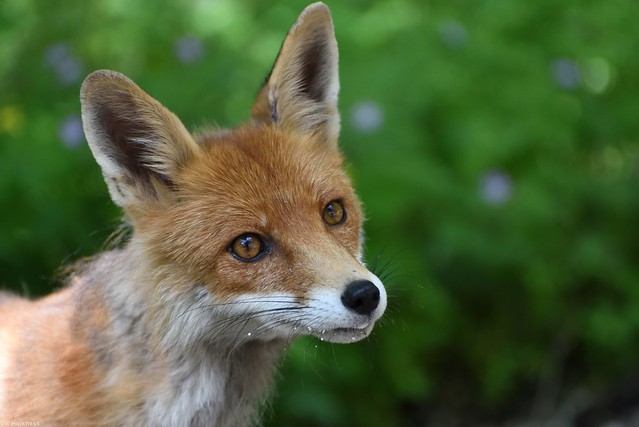 From how confident around us the fox seemed, I assume that we are not the first bunch of tourists to feed it. That said it added a very enjoyable moment to the trip, and I’m very happy with the photographs I took. Since posting them on Flickr, I was approached by someone that requested I change usage rights to my images so that they could be used for the Wikipedia article on wildlife in Chernobyl, which I was all too happy to do. My little claim to fame:

Later on in the same day, we visited the unfinished cooling towers which would have made up part of the extended power plant. We went inside the taller of the two towers. The top of the tower still features the scaffolding used by the builders. 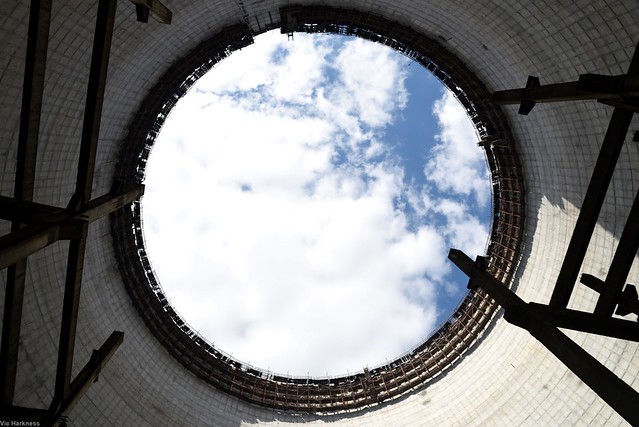 In this scaffolding, there appear to be several families of kestrels nesting. This is an assumption based on the time of year and that we saw multiple kestrels flying around inside the tower. It seems that the birds had to circle inside to gain altitude to fly out of the top, giving us time to watch the birds while ensuring that they were two far away to be photographable.

Most of the animals in the zone seemed normal. The one thing that seemed unusual to me was the ants. They were quite large, but that doesn’t mean anything special. What confused me was the way they move. Normally, ants seem to just run around consistently, following the pheremone trails of their little ant buddies. Not the Chernobyl/Pripyat ants! They seem to stop and start in their movement, producing quite a strange effect.

This seemed to be true of ants all across the zone, but not outside the zone (e.g. in Kiev). I know very little about ants at the best of times, and can’t say if this was due to the effects of the radiation. Still, it did seem quite odd!

I’m hoping on future trips to the zone to be able to do a flight overhead. From there I hope to be able to see more wildlife (such as wild horses), as well as generally get a better view of the zone! Unfortunately, this is unlikely to happen for several years.