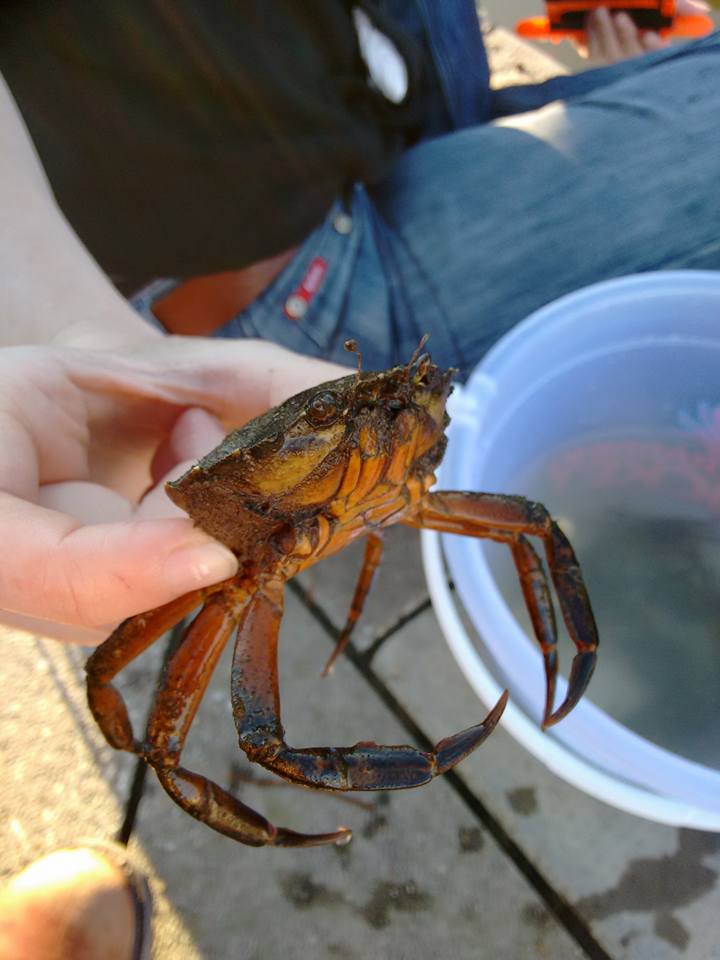 In which Vic catches crabs

Published by Vic Harkness on November 1, 2015

I’m down visiting Aberystwyth for a few days, and today happened to be unusually warm for Wales (apparently, the warmest it’s been in November since 1946!)

The original plan was to get some work done, but as it was so warm we decided to head down to the sea front to get some ice-cream. Upon reaching the sea front Sam and I realised that we had failed to bring enough money, so instead we just sat around and watched the sea-swans. 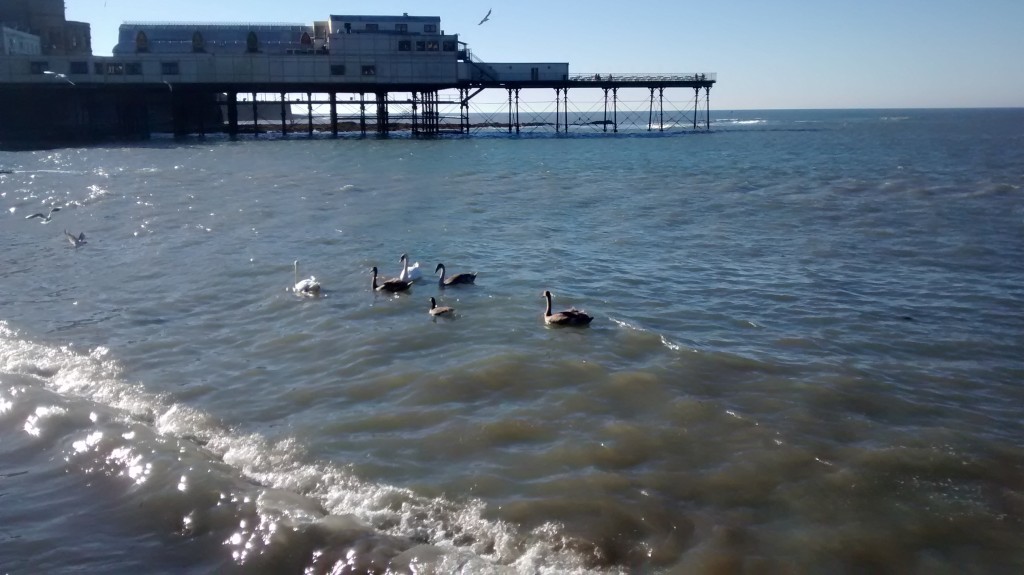 I’ve not seen swans anywhere in Aberystwyth before, so we think that they may have been lost. The swans also had a young-looking Canada goose with them that seemed to have been grouped in with their cygnets. A quick Google search reveals numerous stories of swans adopting geese, so perhaps that’s what’s happened here.

After a bit of discussion, we decided that since it was so nice out we should go do something. We decided we should do some crab fishing. Normally I do crab fishing in Aberdovey/Aberdyfi, but we’d been up that way yesterday to get ice-cream in Tywyn at the Halo Honey Ice Cream Factory Shop. So, we decided to head south to Aberaeron for the day instead. Its a nice drive to Aberaeron with some lovely views of the coast!

Once we arrived, we quickly found a shop selling crab fishing gear/bait. We had neglected to check the tides before heading out, and found that the tide was quite low (and still heading out). Still, we set up and tried our best to catch some crabs. Unfortunately, we didn’t initially have much luck. 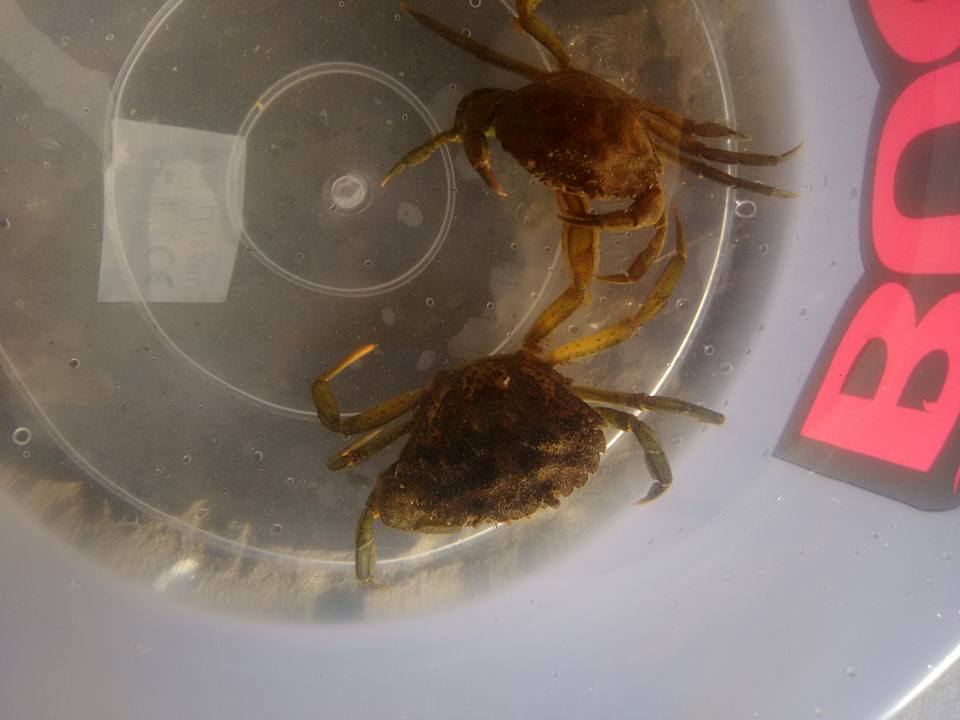 We found that the crabs tended to drop off of the bait (we used mackerel) as soon as we tried to lift them out of the water, resulting in me lying on my front in seagull poop to be able to get my net as close to the water as possible for when Sam lifted the crabs up. We eventually managed to catch about 12 in ~1 hour of fishing, before getting bored. 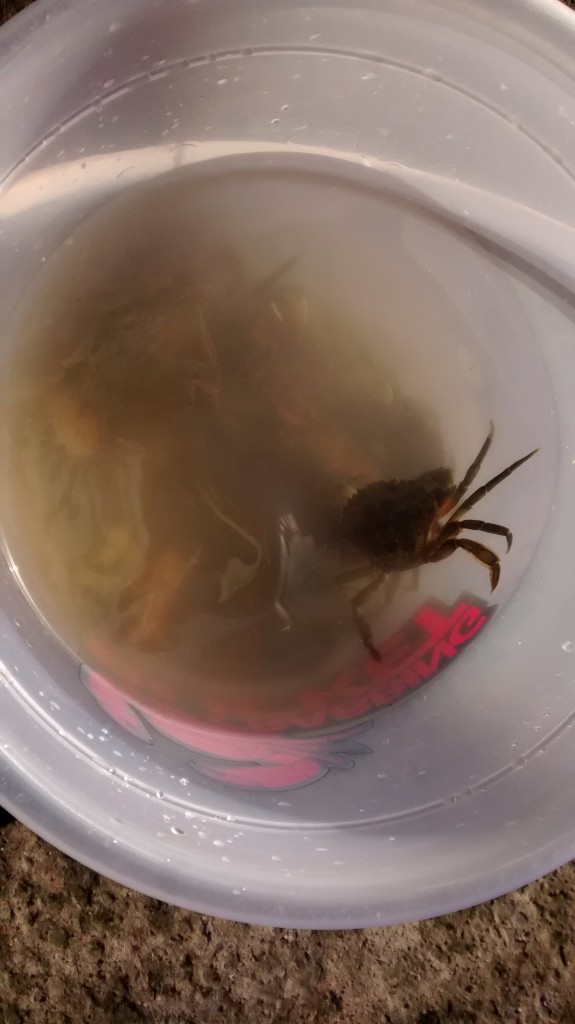 During some of the slow spots of fishing, I tried to identify what crabs we had caught. The vast majority of them looked the same (just of varying size/numbers of limbs), and appeared to be Common Shore Crabs, also known as Green Crabs. We caught one different looking crab, that was a bit more red in colour. 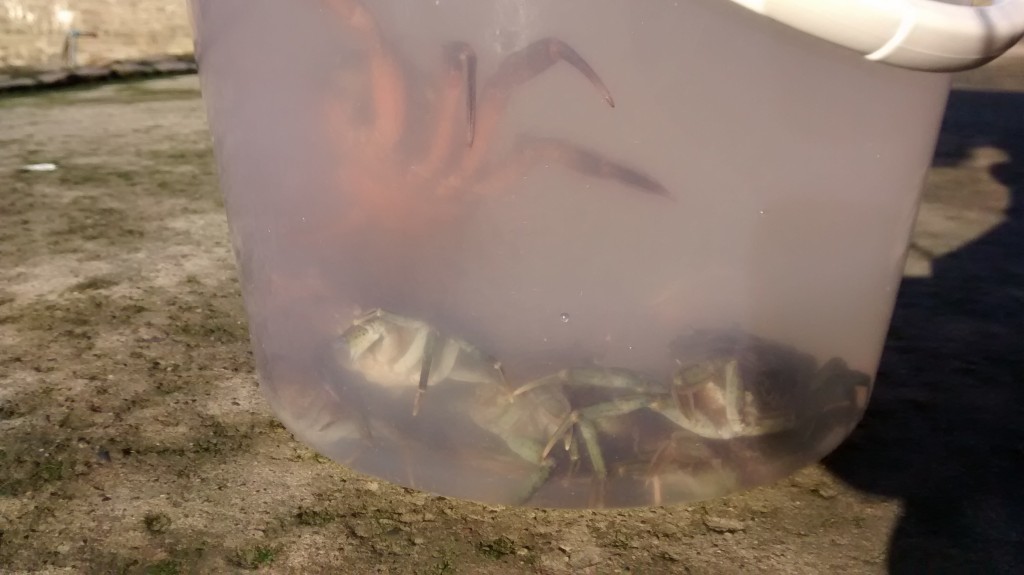 I grabbed him out of the bucket (using the skills in avoiding the crab claws that I had learned in my youth) to get a better look at him (or maybe her!)

Interestingly, this sad looking crab has no pincers. This is probably why it looked so sad. We’re not entirely sure how we caught it, we assume that it grabbed on to the bait bag (we used a small mesh bag to hold bait rather than a hook) with its legs and somehow managed to stay put when lifted like that. According to some websites, Common Shore Crabs can be red like this one, according to others they can only be green. We looked at other common UK crabs, and the only other one of this shape seems to be the Velvet Crab. However, this crab does not have the characteristic red eyes, so I assume it is just a Common Shore Crab.

Although we agreed that the caught crabs were too small to be worth it, we decided to do some research- can you eat Common Shore Crabs? The answer seemed to be “yes, but they don’t taste very good and are generally far too small”. It’s recommended to try eating some of the other common UK crabs, such as the aptly named Edible Crab (AKA the Brown Crab), or Spider Crabs. These are both harder to catch on a line like we used however, so it seems unlikely that we’d be able to catch any for our own consumption. Perhaps in the future we’ll brave going in to the sea in our wet-suits to try and hunt some by hand!

After we’d had our fun with the crabs, we decided to return them so that we could go grab some food. We poured the crabs out on a ramp that leads in to the bay where we had caught them. Some time was spent shooing seagulls away with a net to safely allow the crabs time to get to safety. After that however, we decided that we may as well feed our leftover mackerel to the nearby herring gulls.

Sam attempted to take pictures of the process, so hopefully he’ll have some interesting pictures for me to link to in the future!