It’s hard to get a Halloween burger in Wales (but at least The Spaceguard Center is cool!)

I’d recently read about the black burgers available to celebrate Halloween at Burger King, and decided I wanted one. Sam also wanted one, and so we decided to go together. He’s back in Aberystwyth, and there is no longer a Burger King in the town (although I’m told that there was one before I started at the University). The Burger King website store locator doesn’t seem to work, so I took to Google to try and find the nearest Burger King. 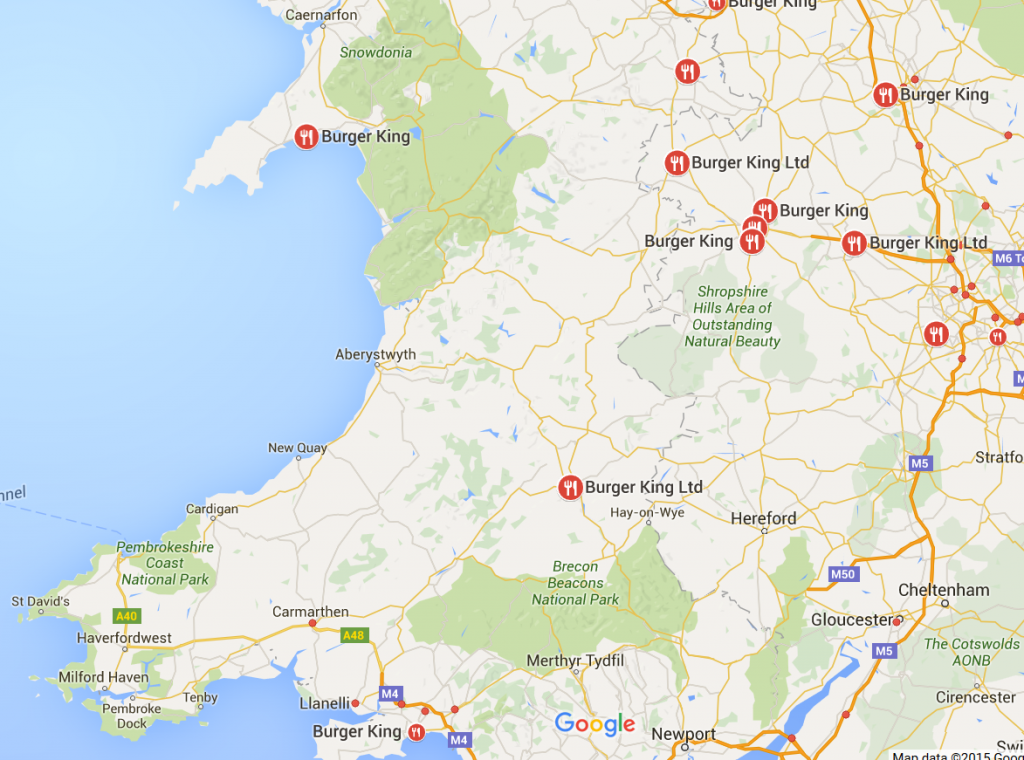 And so I learned that there aren’t really many Burger Kings in Mid Wales. The nearest one (near Hay-on-Wye in the above map) was the one in Builth Wells at 1hr12 away by car. This seemed a bit far to go just for a burger, and so we decided that we would also visit The Spaceguard Center, as it is out that way.

The Spaceguard Center is an observatory that is part of a world-wide effort to track objects in space that could potentially come in to contact with Earth. As it’s a working observatory, tours are conducted to ensure that visitors don’t break anything. I found the tour really interesting. The tour was conducted by the Director, Jay Tate, who was obviously very knowledgeable and enthusiastic about the subject. We were able to see the Center’s collection of meteor samples, and Jay was nice enough to indulge is in holding pieces for us to photograph. One of my favorite samples can be seen below: 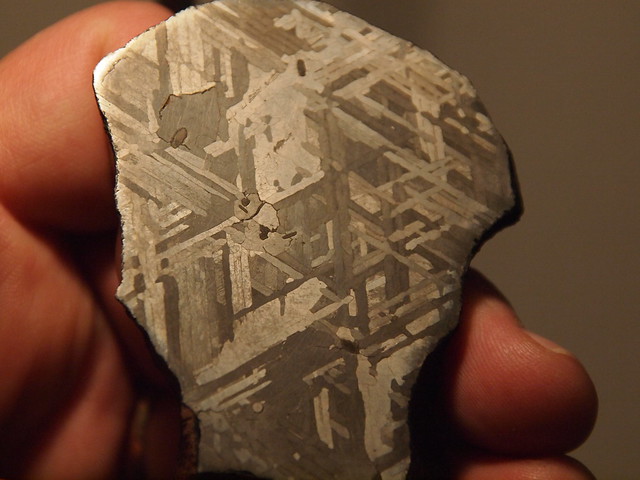 The above is a slice of the core of a meteor that has landed on Earth. The unusual pattern stems from the low cooling rate of the molten metal core, around 1 degree per million years we were told! My other favorite sample is from the mantle of a meteor (the point at which the metal core and stone outer layer meet): 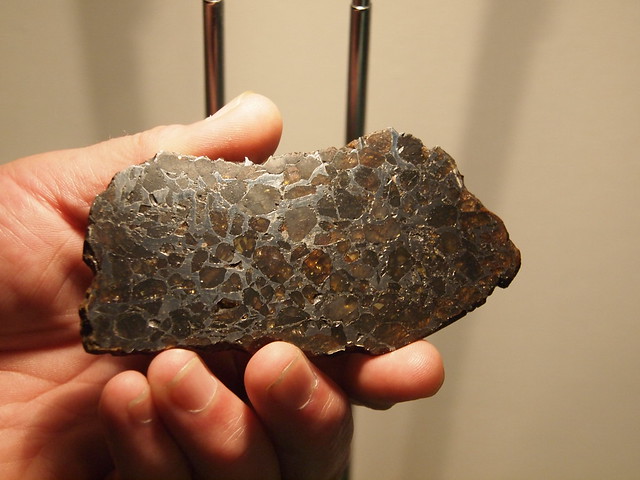 My pictures unfortunately do not do justice to how amazing it looks when held up to a light: 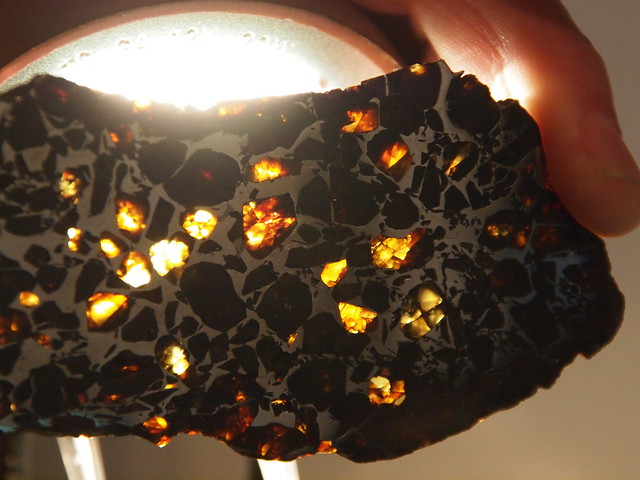 We looked at various meteor strikes that have occurred around the world, and learned about how a meteor impact can be identified/verified. We learned about how the deformations of quartz can be a big indicator of a meteor strike. The force of a meteor impact on quartz causes shock metamorphism, in which the crystals can become cloudy or even powder due to deformations along the various planes naturally occurring within the crystal. This could also potentially be caused by volcanic activity, however. During the meteor strike the quartz can turn in to a material known as Stishovite. This is a much better indicator, the required shock pressure is greater than that possible in volcanoes. We also learned about other indicators, such as “cones” of rock which form at the point in the ground where the meteor shattered, and “splashes” of rock from where the impact was able to instantly liquefy the impacting surface. I was unfortunately not able to get a great picture of a piece of splash:

One of the main attractions of the Center is the observatory itself. This is in a small dome, on a suspended floor. Unfortunately I did not have my fish-eye lens with me, and so it was quite hard to get a good photograph of the set-up. 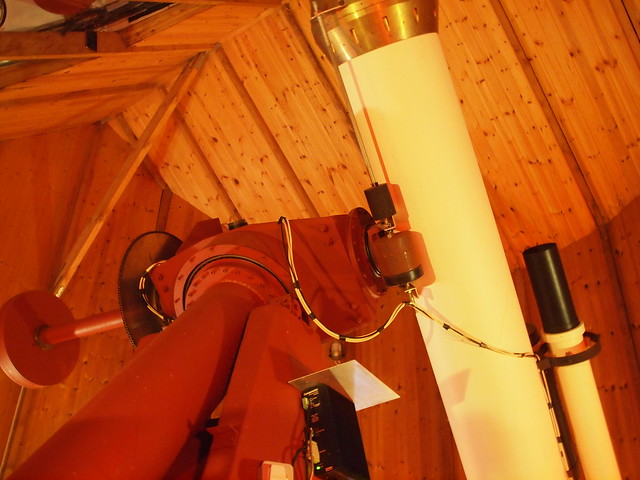 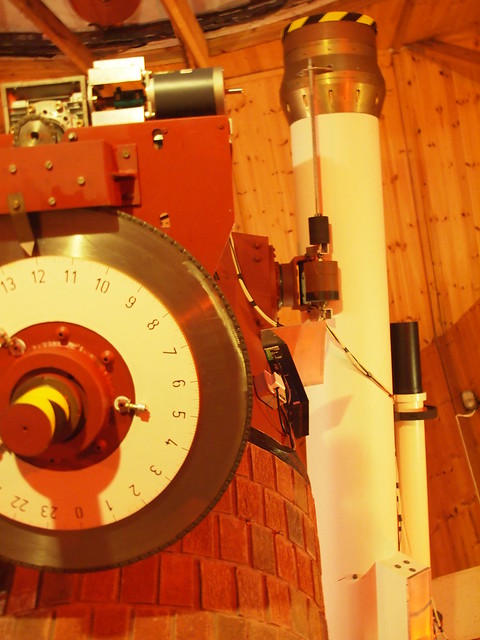 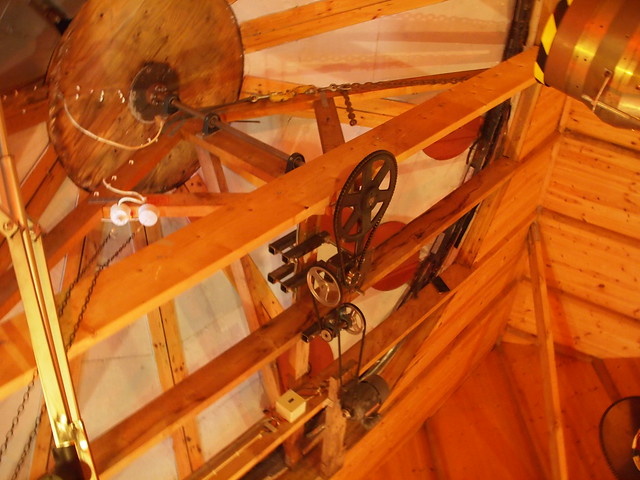 The telescope is on a large stand and is all automatically controlled. The movements of the telescope are demonstrated in this (poor quality) video:

I learned that the reason the floor is suspended is so that it can go up and down to match the height of the telescope. The floor can also rotate, bringing the telescope with it. The “window” on the front of the observatory is also opened by robotics. The reason for this degree of robotics is that everything is controlled by a computer- software allows the telescope to locate and track objects as told with a much higher level of accuracy than that seen by a human operator, allowing for much higher quality images.

We learned during the visit that the center is actually going to be getting a much higher quality telescope soon, from Cambridge University. This telescope is not technically a telescope as it does not have a viewing hole for live viewing by humans- it is connected to a camera and can only be used for taking images. This telescope will greatly increase the capabilities of the Center however, and will make the Center a much bigger player in the tracking of near-Earth objects. This telescope is expected to be up and running with the next year, as funding permits. The housing for the telescope is currently being built through volunteers and donations.

The base of the telescope has already been inserted, as it needs to be in place before the upper floor can be built. The roof dome is to be built out of 25 matching fiberglass arcs, 24 of which have already been made.

Sam and I very much enjoyed our trip to The Spaceguard Centre & Observatory, and would certainly recommend it to people. We were also amused by some of the Center’s “updates”:

After we left the enter, we embarked on our trip to Burger King, where we successfully obtained Halloween burgers: 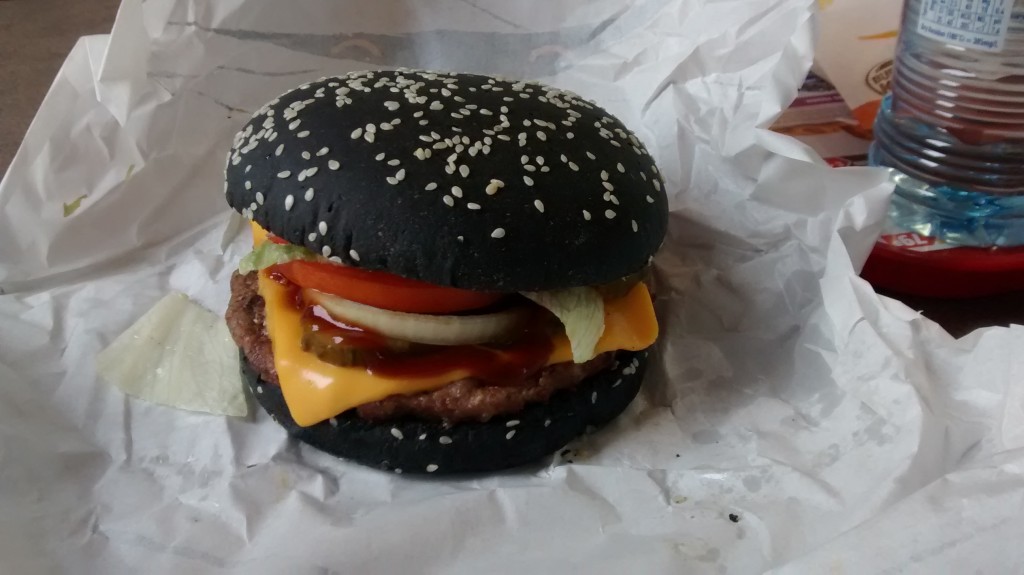 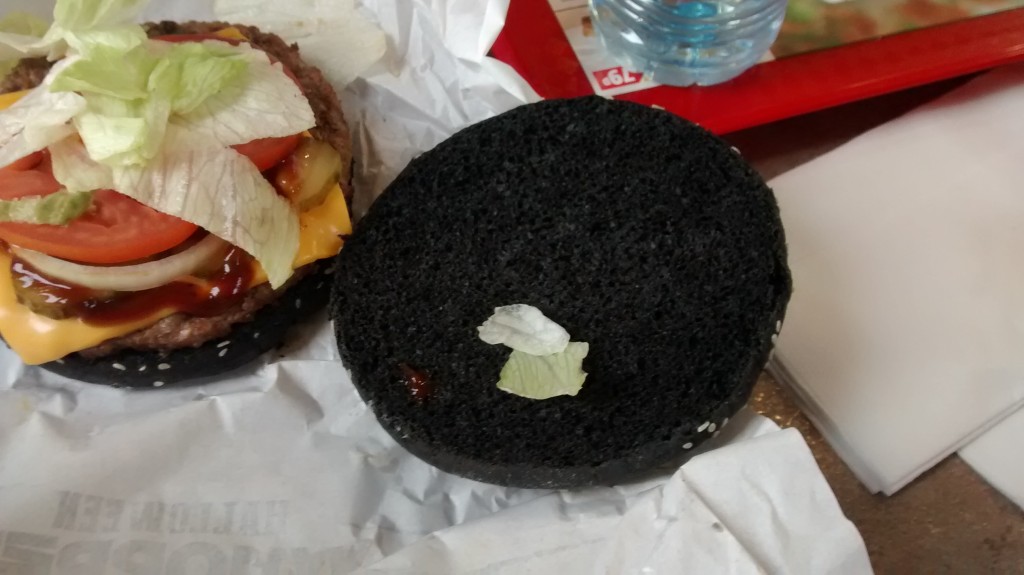 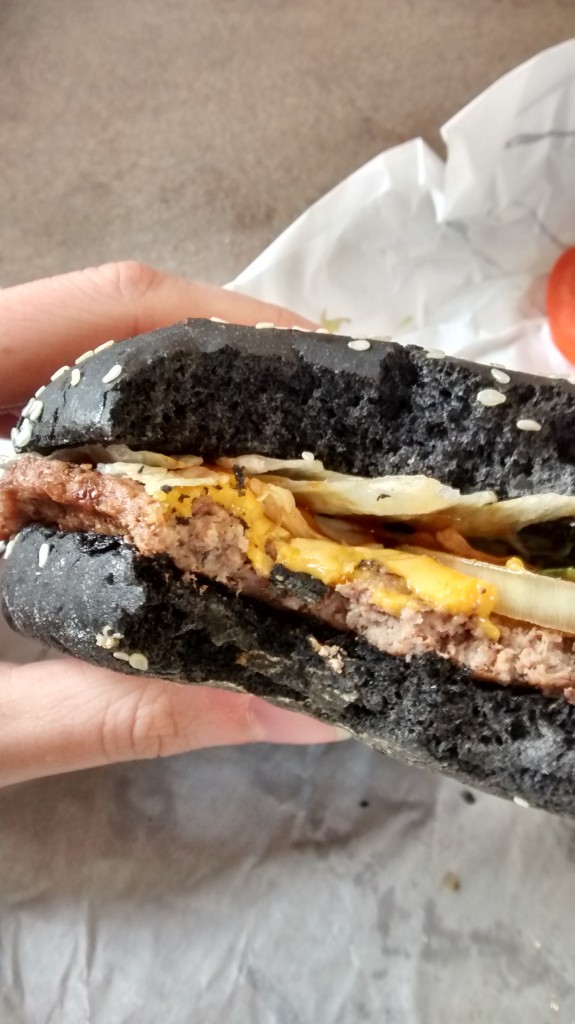 I really dislike mayo, so I had the burger without mayo. I also picked out the tomato/gherkin because I’m not really a big fan of their textures. The burger tasted surprisingly normal. I tried a bit of the bun on it’s own and it has a slightly odd, slightly BBQ taste (according to Burger King, the colour comes partly from the infused BBQ sauce and the burger is less than 1% food coloring). The bun had a slightly stale texture despite appearing to be quite fresh. I think that I’ll be sticking with regular burgers in future, but it was worth having one for the novelty value! I also liked the updated crown: 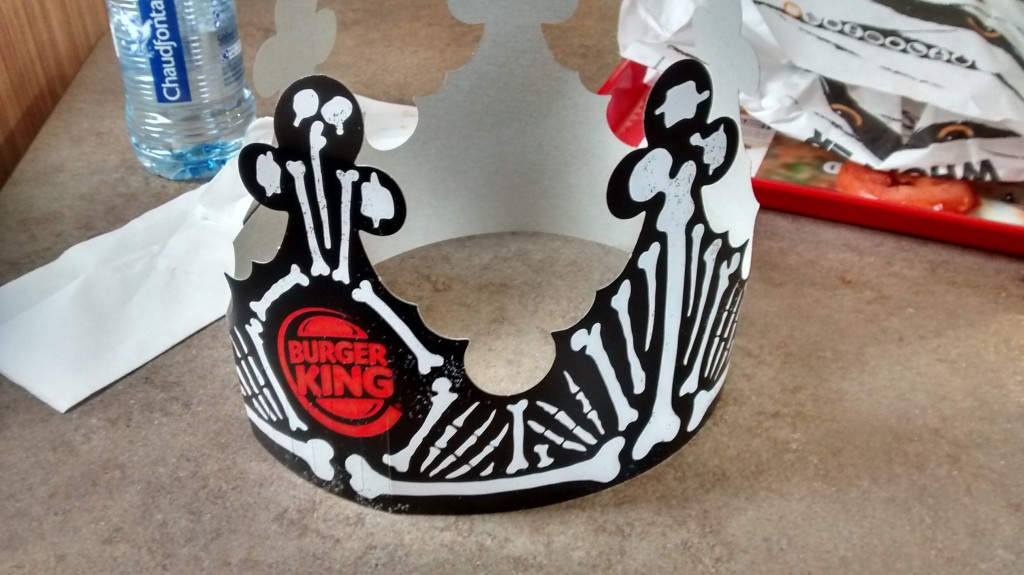