A trip through Zeeland in The Netherlands

Published by Vic Harkness on September 27, 2015

After visiting Baarle-Hertog/Baarle-Nassau, we continued on to the coast of Zeeland. We largely made up the route as we went along, due to not having a physical map and no mobile data. Google Maps had sort of buffered the map (a yellow line represented the main road, and larger secondary roads were represented with a blur). This combined with our GPS location was used as an approximate method of navigation. We took quite a few wrong turns, but as we didn’t have any real destination in mind this wasn’t a problem. On our drive, we went through Zoutelande. However, we missed a turning and spotted a street market. I’m very much a fan of markets, and so we decided to pull over to take a look at it. 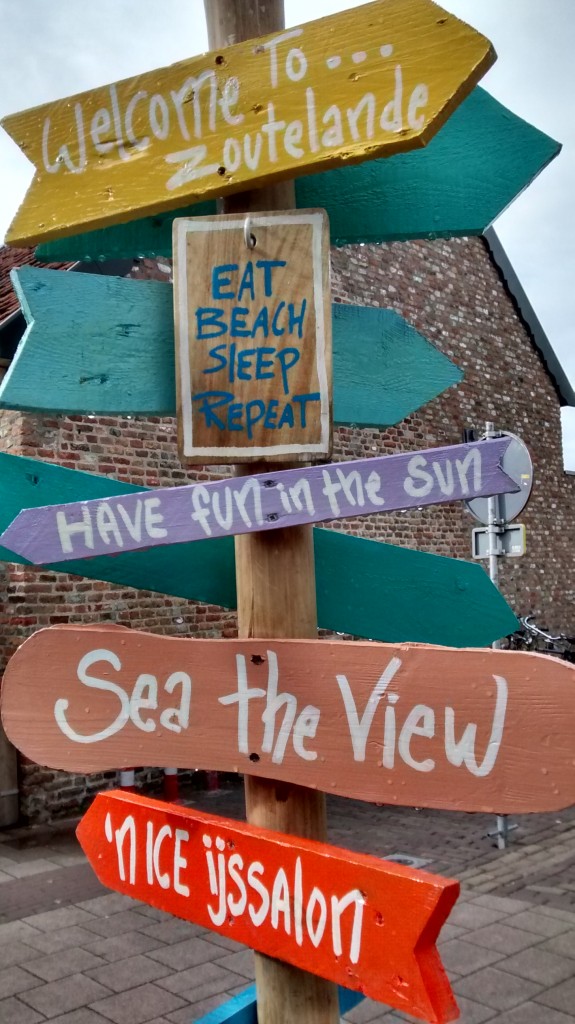 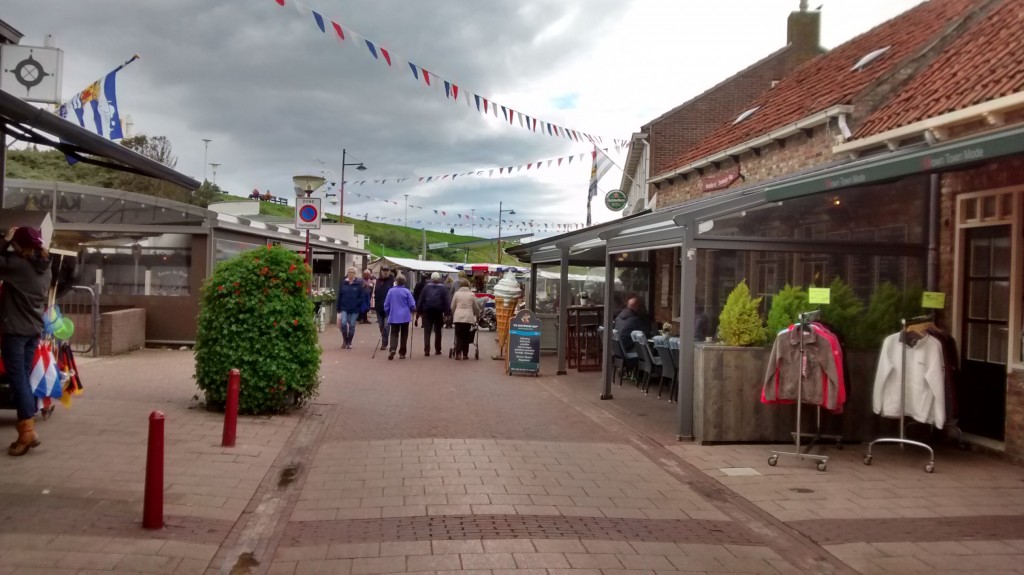 The market was very nice, and we obtained the biggest soft-serve ice-cream I’ve seen in a while: 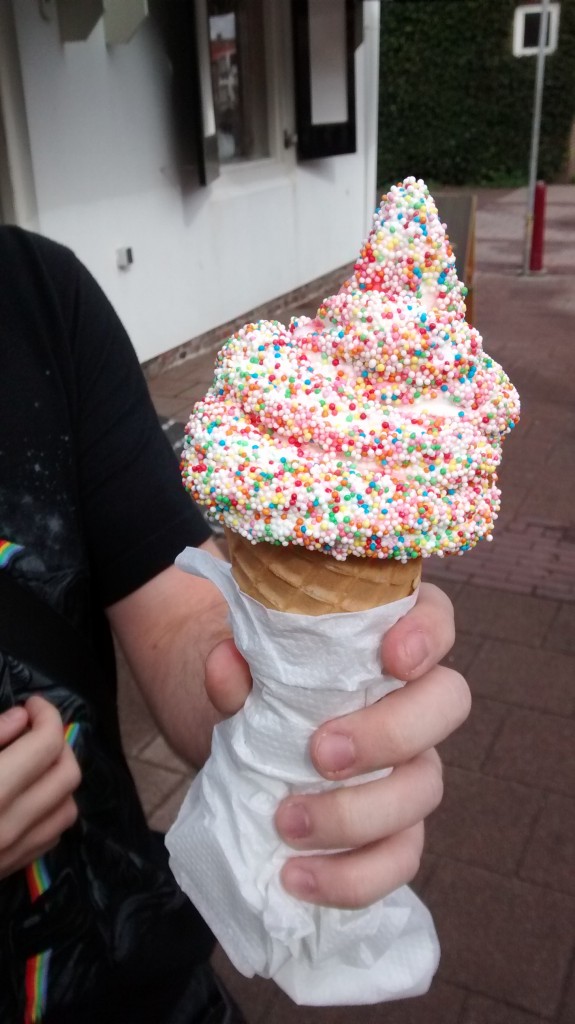 I also learned that in The Netherlands, what we would call Hundreds & Thousands (apparently the proper name is Nonpareils) are called Disco Bits.

The market sold all sorts of things (including food), and I bought various bits and pieces. I’d say the most interesting thing that I bought was green cheese: 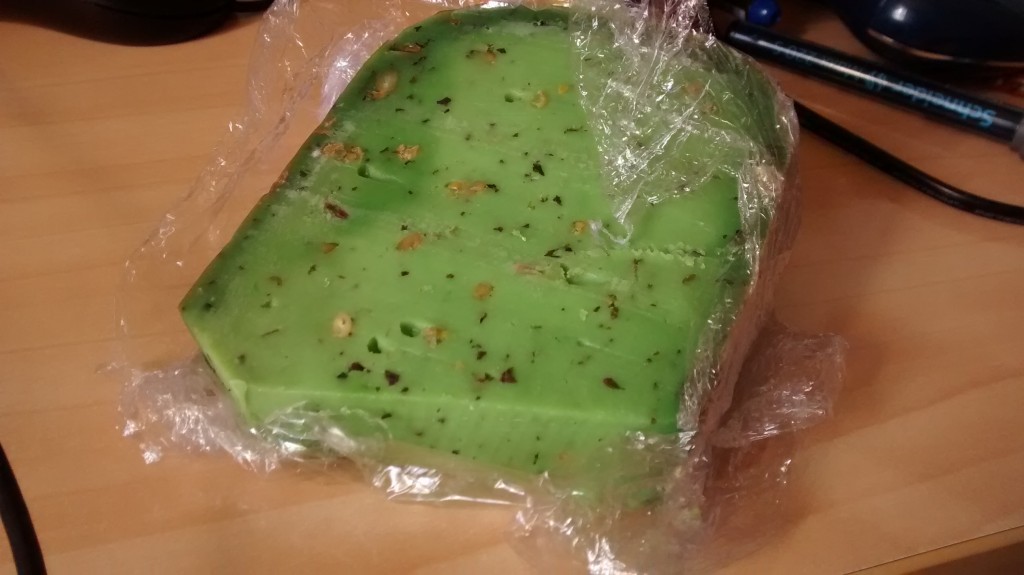 This cheese is known as Villa Verde, and is made with pesto and various herbs that I was unable to translate. I assume it’s artificially dyed green though. It really does taste quite strongly of pesto, so I’ll probably eat it with pasta.

Zoutelande is a town that’s right on the edge of the coast, and just over the wall from the market is the sea. 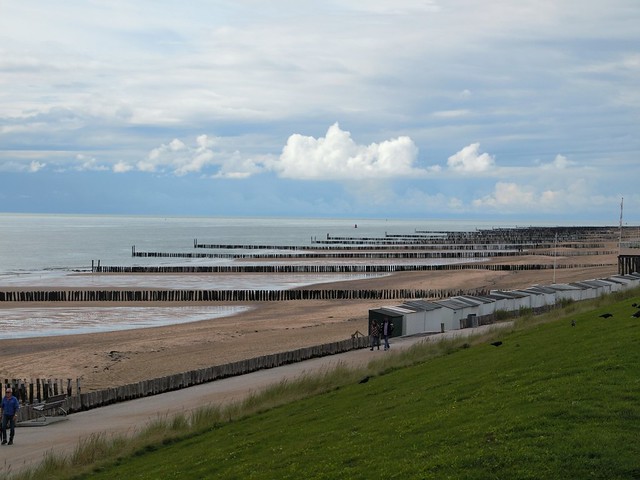 We checked the weather online before leaving Belgium, and it was expected to rain all day. Thankfully the weather held up while we were in Zoutelande, although we could see rain in the distance. 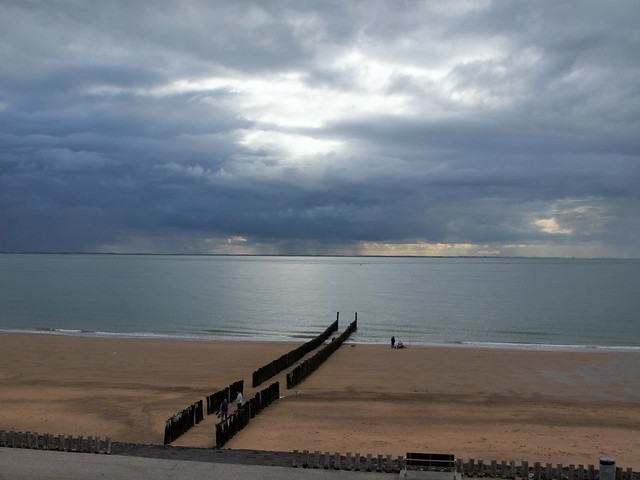 The sea wall in Zoutelande was quite interesting. It seems that they’d made a large pile of rocks as is normal, but then poured tarmac over it all.

It made it quite easy to walk up/down the wall, as it was fairly smooth. I can’t help but wonder if this makes the sea wall any more durable, and if it may be a viable technique for use back in Aberystwyth. Towards the bottom of the wall, seaweed had taken up residence in the tarmac which made for some interesting pictures. 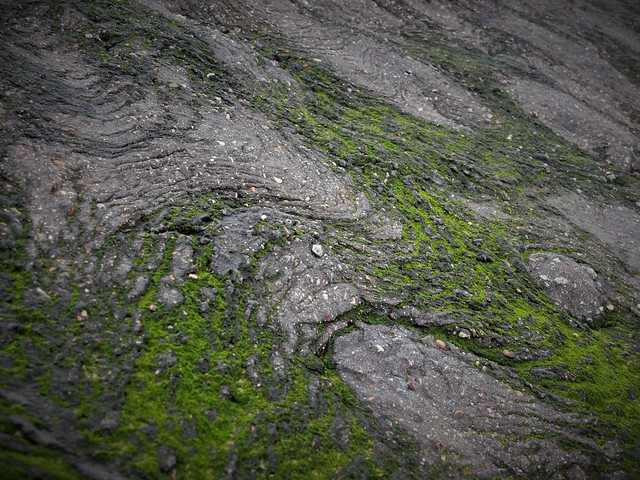 I found myself heavily favoring the vignetting effect when editing images for the day. 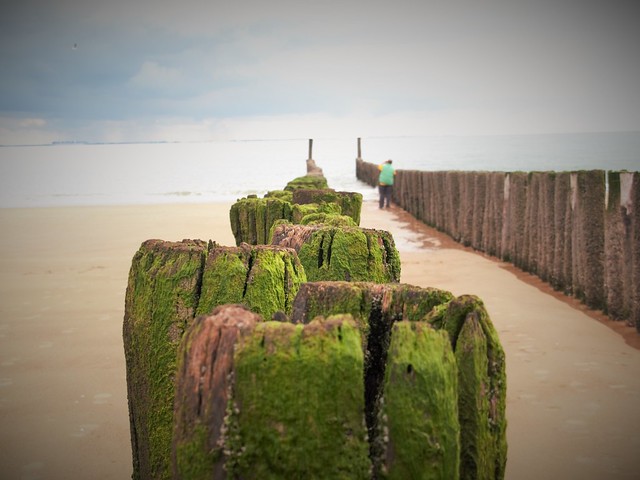 I think that it works well with the “central focus” style I’d been going for during the day. Most of my pictures were quite dimly lit already, due to the overcast weather. 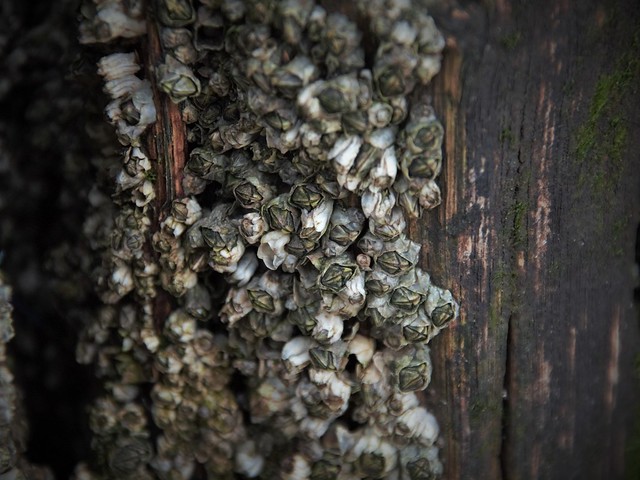 The vignette filter that can be applied using Windows 8.1 photo editor brightens the center in close-up pictures as well as dimming the corners, which I found to help the lighting in my pictures (such as in the above barnacles picture).

After visiting Zoutelande (and finding the correct turning to leave), we drove up to Neeltje Jans Delta Werkeiland, the small island making up part of the bridge between Noord-Beveland and Schouwen-Duiveland in the Oosterschelde. It is an artificial island, constructed as part of the Oosterschelde. The Oosterscheldekering is the sea wall aspect of a large dam (the Oosterschelde), that is part of a 13-part Delta Works series of dams and storm surge barriers that are designed to help prevent The Netherlands from being flooded by the North Sea. 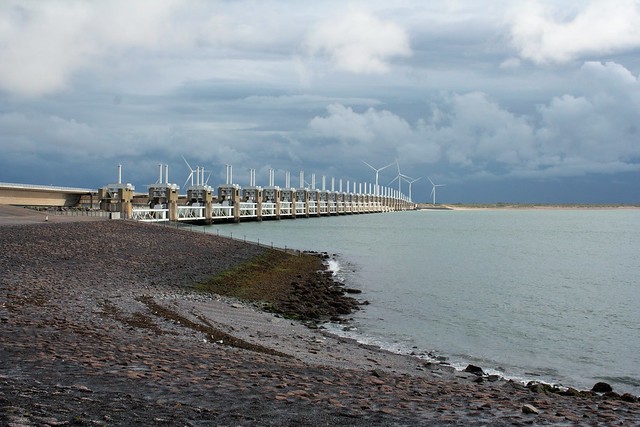 This sea wall contains huge sluice-gate-type doors which are left open most of the time, but are closed in the event of adverse weather. These doors are left open normally so that the dam remains a salt-water body, and so can be fished. 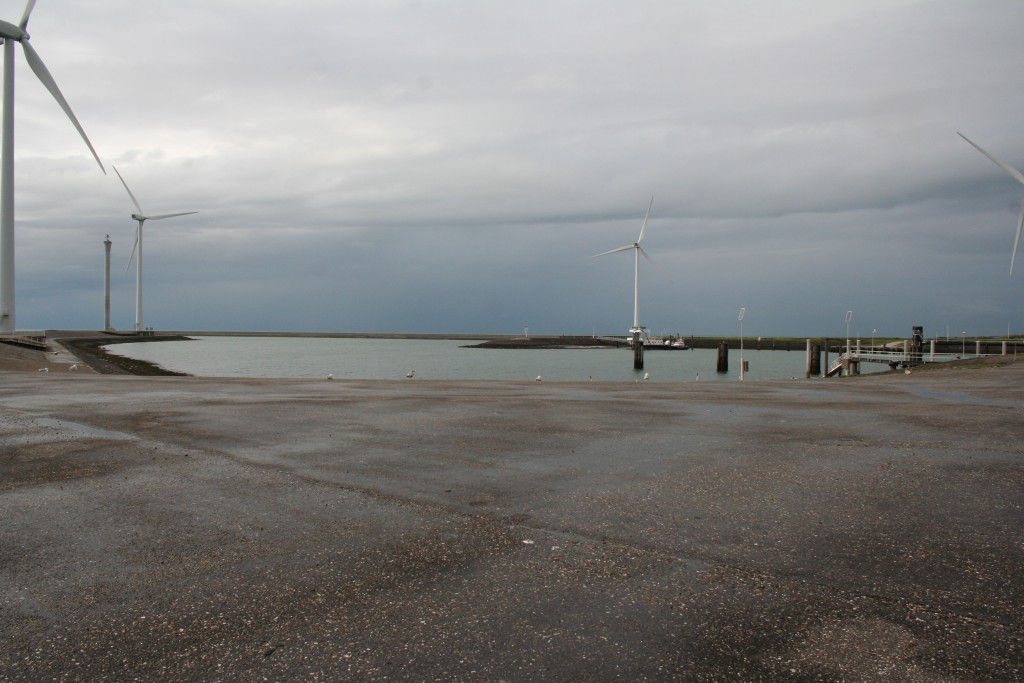 There also appears to be a wind farm on Neeltje Jans Delta Werkeiland. It was only by chance that we found this car park. Due to out aforementioned poor navigation system, we ended up taking a wrong turn and driving along a small road that ran parallel to the main road. This was quite odd to drive along, as it went over the bridge, but still seperate from the main road. However, when we reached the island, the road we were on dipped down to stop on the island whereas the main road did not.

After continuing up to Schouwen-Duiveland, we decided to call it a day as we were losing the light. We drove East along Schouwen-Duiveland, before returning to the mainland and heading back to Leuven. The drive was very scenic, and it seems that there’s a lot of nature reserves on these islands. I’d like to be able to return to the area in the future and spend a couple of days driving further North while having time to stop and look at anything that catches my interest.