Swimming in and around Torrevieja

One of the main reasons that I wanted to go to Spain was to see the fish again. I recall seeing fish in the water when swimming on previous visits, and that the water was beautifully clear. I’d previously bought a GoPro, and so I decided that a big part of this trip to Spain would be attempting to take pictures of the fish.

Torrevieja
Torrevieja was one of the first places in which we swam. It’s a lovely town to visit in the evening, as there’s a market to the south near the quays and lots of places to eat. The food is fairly tourist-y, but still nice. I didn’t take my DSLR with me when we went to swim, as I didn’t want it to get stolen. I did take a panoramic image with my phone, however:

I found out that when my phone does panoramic images, it compresses them to be the same size as a normal image, hence the poor quality. I think that I should look in to getting an app that stitches together lots of images and maintains their resolutions.

A little bit further along the seafront from where the above picture is taken are some concrete “bays”. These seem to be designed for swimming in as they have gentle slopes in to the water and sand for sunbathing on. We decided to go swimming here. 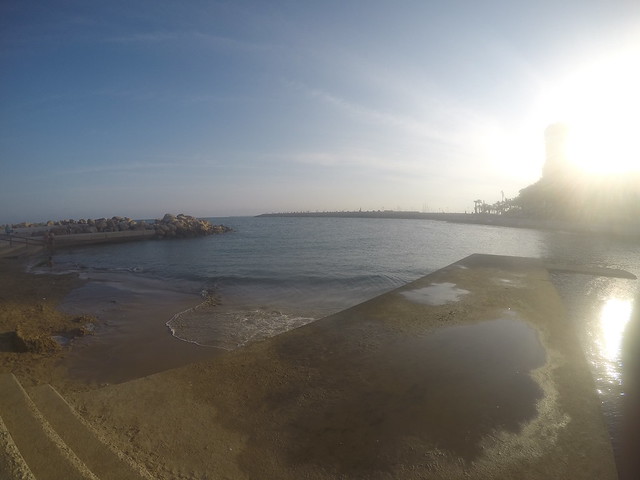 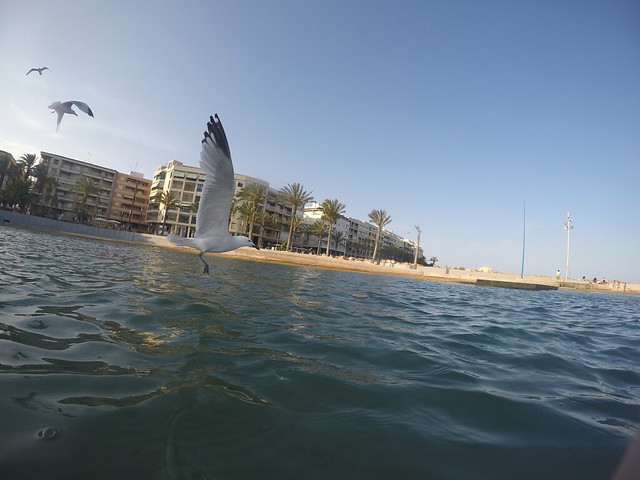 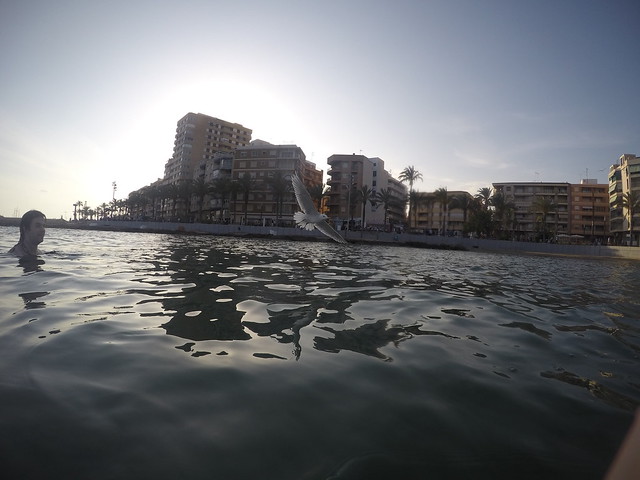 We saw some fish when swimming, but unfortunately we forgot to bring our goggles. This made the fish pretty hard to take pictures of: 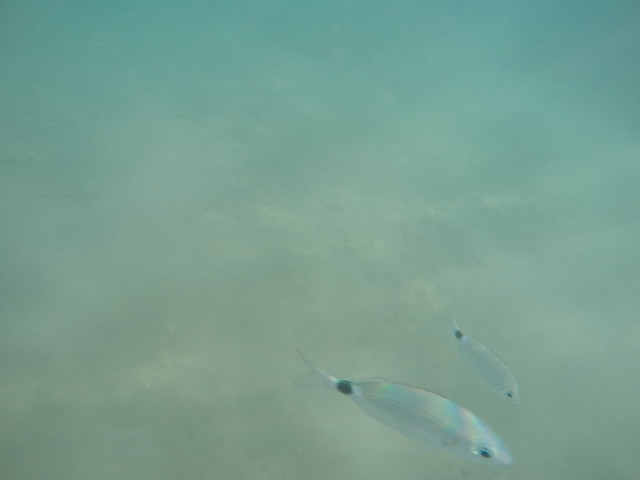 Sam managed to get some better pictures however, as he as more tolerance for the salty water getting in his eyes!

Later on in the trip we did try swimming in the northern areas of Torrevieja, but we found that the beaches there really weren’t great for swimming. The beaches were very nice, but unfortunately the sea was full of rocks. This combined with the waves made going in the sea here a quite unpleasant experience. We tried a couple of locations and did find one without rocks, but it was still quite rough and there were unfortunately no fish. We took some GoPro pictures in the waves, and I was quite pleased to see how good of a job the GoPro does at taking pictures of moving objects! 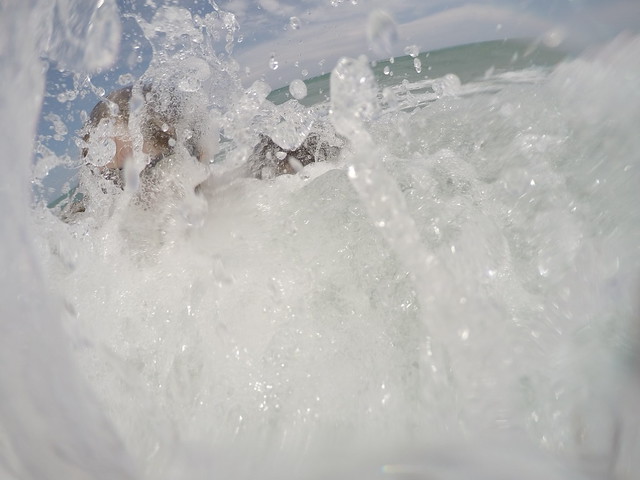 If you just want to sunbathe though, the northern beaches of Torrevieja may be the beaches for you. 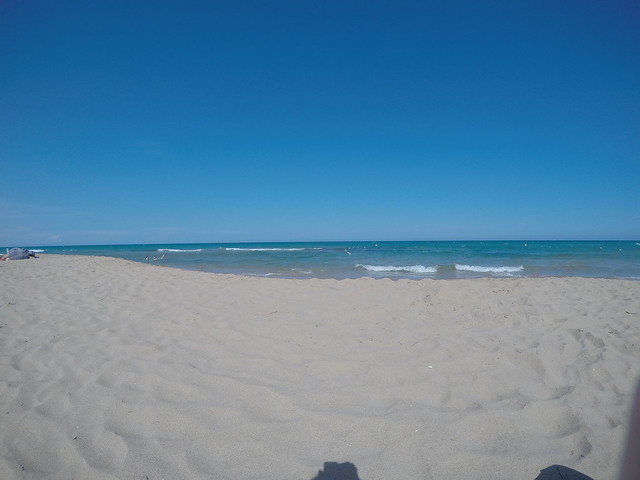 Laguna Salada de Torrevieja
A bit further inland from Torrevieja, we visited Laguna Salada de Torrevieja (one of the two lakes making up Las Salinas de Torrevieja). This lake touches on the sea, and contains a lot of salt. So far as we could tell, the salty water from the sea is able to get in to the lake, from which the water evaporates. This leads to the water in the lake being saturated with salt, and so the bottom/edge of the lake also being covered in salt. It also means that people are able to float on the water, much like in the Dead Sea. Another unusual thing about the lake is that it is pink. This is due to the type of algae that live there. These are eaten by shrimps, which are in turn eaten by flamingos, giving them their characteristic colour. 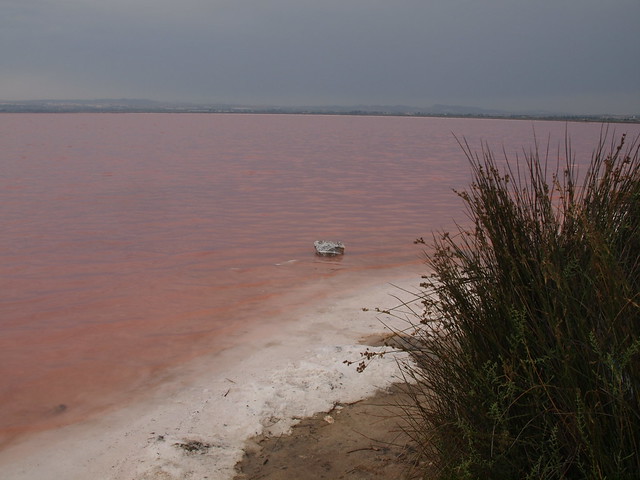 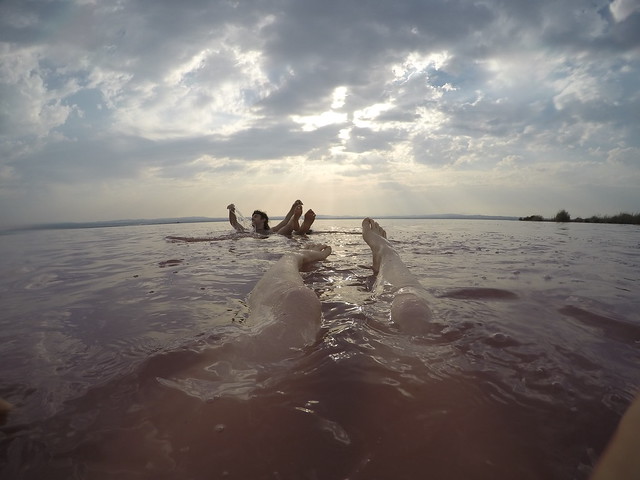 It was a strange feeling to float like that. It made it sort of difficult to roll over, as you couldn’t easily get your legs under you. It’s just as well that you can float so well here, as the bottom of the lake is covered in salt which was quite sharp:

When we initially went to the lake, we looked at the map and chose where to head based on where it looked like we could park. This proved to not be a great method, as we ended up somewhere that was very muddy and didn’t really allow for swimming. I later checked Tripadvisor, and found that quite far down the list of comments displayed, someone had posted these co-ordinates: (37.996916, -0.700556). We decided to head there. We found plenty of space to park here, and that it was a short walk from the lake. When we arrived there were already several people swimming, so I suppose that this is a well-known spot to swim! We did not see any flamingos on either of our trips to the lake, although we did later see some on some salt lakes during a drive to Alicante.

Near the main lake, there was a pool full of natural mud. We read online that it’s good for your skin and saw other people coating themselves, and so we decided that we would try it too. 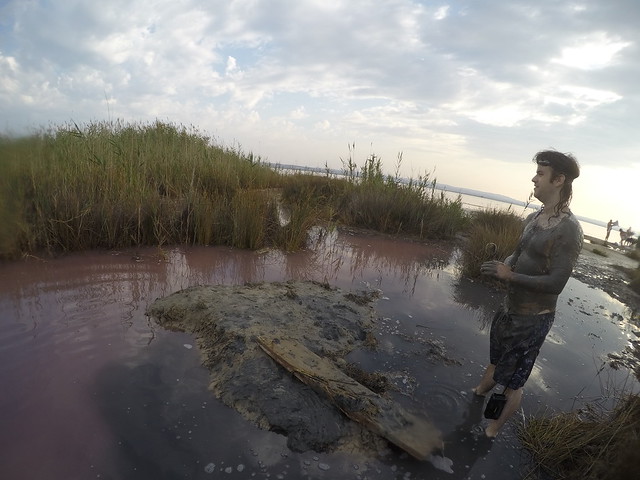 It certainly made our skin feel quite smooth! We noticed that some people had brought large bottles of water with which to rinse themselves off. We simply rinsed the mud off in the main body of water, and drove back to our flat to shower away all of the salt. It was interesting to see how many salt crystals formed on our skin, and having both gotten drips of water in our eyes we could appreciate how salty the water really was. My top tip would be to leave a towel by the edge of the lake as it’s the only real way to remove the salty water from your eyes.

Tabarca
We decided to get a boat ride to Tabarca, an island just off the coast from Alicante. We had initially intended to take a boat from Torrevieja, but found out upon arrival (due to their website being broken) that the boat did not run on Fridays. A quick search online revealed that boats also leave from Santa Pola, so we decided to drive there and get a boat. This turned out to be the right choice as the boat was far cheaper and much more regular from there! 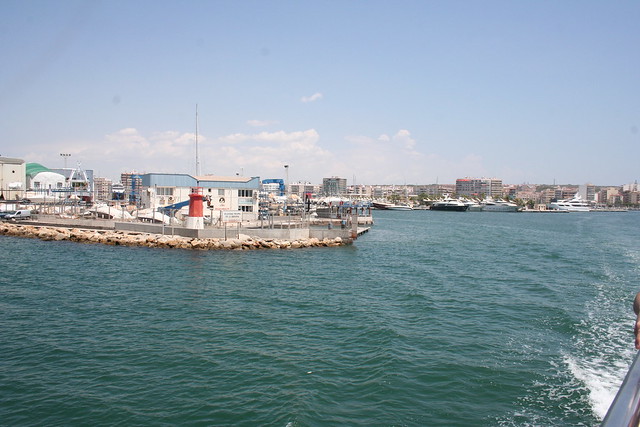 The boat ride to Tabarca took about 50 minutes and was quite pleasant. It took us along the coast, and we got a nice view of Alicante.

Interestingly, the Panorama image generating software had a bit of a faux pass and repeated some of the buildings. I’m guessing that this was one of the points at which the images overlapped, rather than something that the software generated spontaneously.

Tabarca looked quite small as we approached. According to Wikipedia, the island is a little over a mile long. One side of it has some old buildings, and the other has various restaurants, houses and tourist-y shops. There didn’t appear to be a school, so we suppose that local children have to take a boat to the mainland for this. There is however a church, although this was closed for renovations at the time of our visit. The main “town” of the island is surrounded by a wall, with arches at either end. 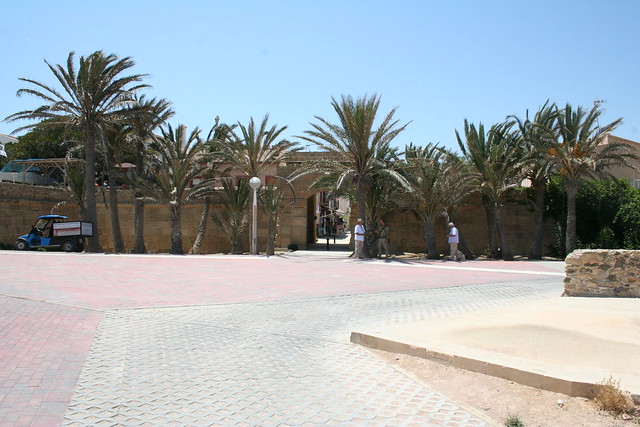 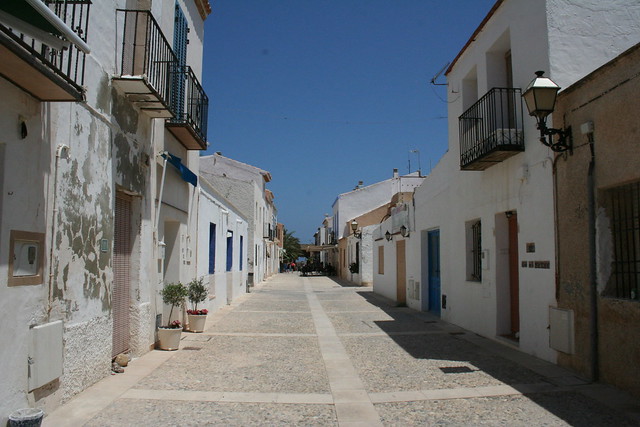 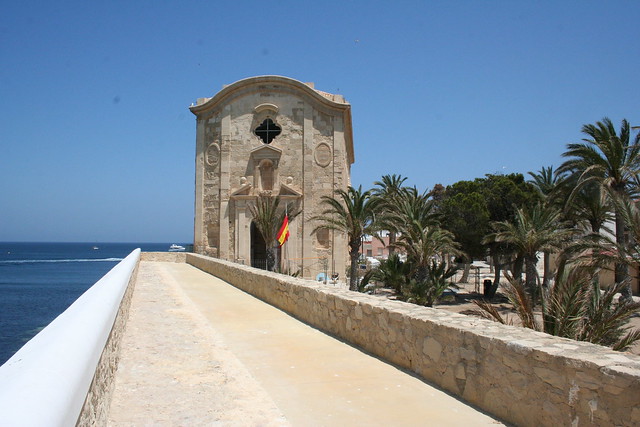 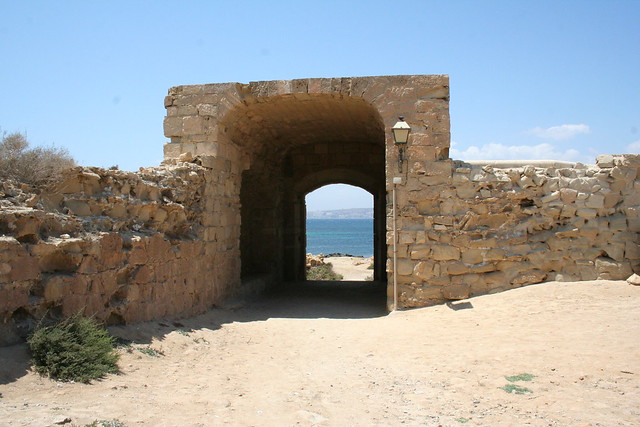 The island is very tourist-y, but it is still a beautiful island. As soon as you step off of the boat you are swarmed by people handing out leaflets to the local restaurants. Due to this being an island, it is mainly seafood on offer. We had a fried seafood platter, which was very nice.

As the plates say, this was at the Mar Azul restaurant. The food was quite expensive, but this seemed to be true of everything on the island (probably due to how tourist-y it was). It would have been nice if the food had some sort of labeling, as although the fish was very nice we weren’t entirely sure what we were eating!

When walking around the walls, we spotted a small bay. We found our way down to the sea, and paddled around to the bay (as we couldn’t be bothered to find the land access). The bay was fairly quiet (there seemed to be a main swimming area on the opposite side of the island, which was quite busy), and was protected by rocks around the edge. This meant that the water was quite still, which was perfect for us.

Boats coming in to the quays go past the bay, but cannot enter due to the rocks. Still, we had to take care not to swim too far out as it was misleadingly shallow! We seemed quite buoyant in the water, although nowhere near as much as in the Laguna Salada de Torrevieja. This ended up quite useful as it made it easy to stay quite “level” when underwater. Once we were in the water we found that there was some coral, which was full of fish! 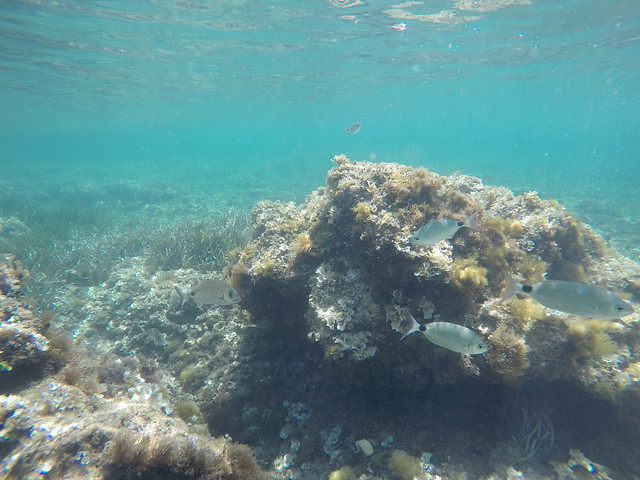 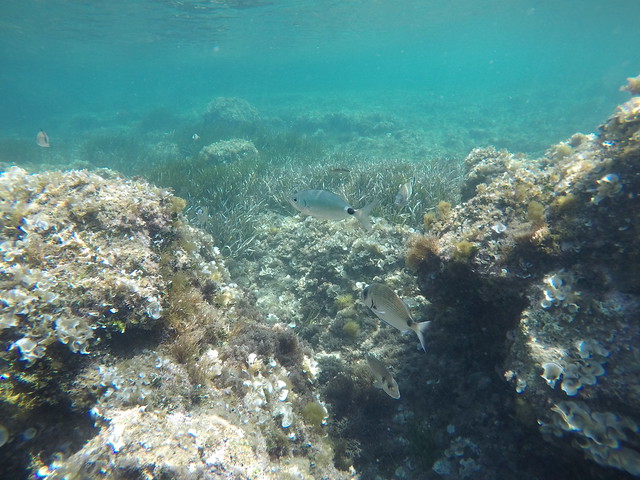 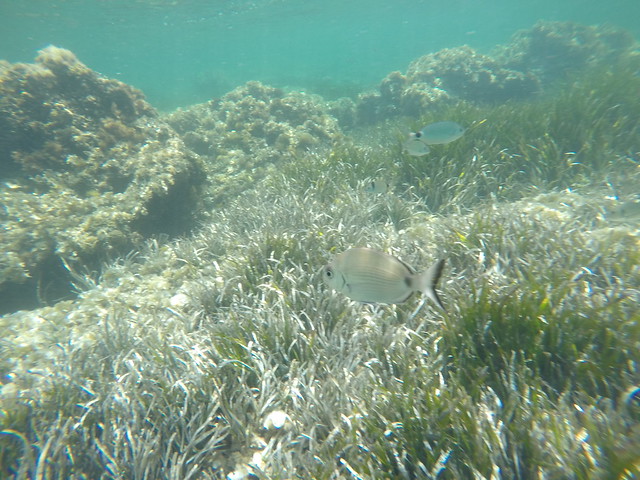 There seemed to mainly be similar fish to those we had seen before, but there were a few that looked different! I was quite pleased to find a fish that didn’t seem too concerned by my presence, and even continued to eat while I watched it.

We also saw some sea urchins, one of which Sam find using his foot. Thankfully the sting did not seem too bad.

The boats back were every couple of hours, and so we stopped at Restaurante La Almadraba and had tea and waffles as we waited. The food/drink was great, and the staff were lovely! If I return I’ll definitely be sure to eat there again. We left the island in the evening, and had a slightly rough boat ride back to the mainland.

The boat that we took has a small “viewing” area in it’s underside, with plastic windows to allow for you to watch the fish. On the way there/back the boat stops for a small amount of time near the island for people to be able to see the fish.

I think that Tabarca was the best place to see fish that we found in our entire trip, and if I return to that area of Spain then I will be sure to visit again!

Sierra Espuña
As I mentioned in my previous post, we swam in the Barrancos de Gebas lake. We were told that there were fish in this lake, but due to how cloudy the water was we could not see any. It was odd swimming in a freshwater lake, as we had become quite used to the added bouyancy provided by the salinity in other lakes. We did not swim for very long as we did not want it to eat in to our buggy tour time too much, but it was a beautiful lake!

I wore the GoPro on it’s head mount when I went in the lake. I came to regret this choice afterwards, as I found that it hindered it’s ability to stay on the helmet until the strap dried out.

The roads that we took in the buggy did not really seem suitable for taking a car along, and it was quite a walk from the nearest carpark. It’s possible that there may be alternative access elsewhere, but it does seem like the buggy tour is a very good method of getting to the lake!