A trip around Sierra Espuña

Initially we were planning on spending a week in Spain, but then I noticed that you could do paragliding nearby at The Espuna Adventure. We decided that we would like to do paragliding, a buggy tour and kayaking. This would add two days to our trip, and we decided that we would spend 2 nights in the on-site hotel. I’m glad that I had mobile data during the trip, as I was able to email with the hotel during the trip. As it turns out they had not managed to get the licenses for kayaking in time, and so it would not be possible for us to do this part of the trip. So, we decided to cut back our trip to a single day plus overnight stay and do the remaining to activities in a single day (buggy tour in the morning, paragliding in the evening). These were the main two activities which we wanted to do, so this was fine with us. However, the weather for the proposed day was thunderstorms. When I pointed this out I was assured that the weather would be fine, and that changing the day of the activities would be impossible (you can see where this is going). So, we arrive the evening before our day of activities and check-in. The room seemed nice, and we decided to go for a look at the area. From the balcony of the hotel you could see the beautiful Barrancos de Gebas lake. We went to a local town for a snack, and then decided to explore a side-road that seemed to go in to the hills on the route back. It quickly turned in to a dirt track, and we pulled over a short distance along to see what there was to see. The storm predicted for the next day had began to set in by this point, and so we did not stray too far from the rental car. 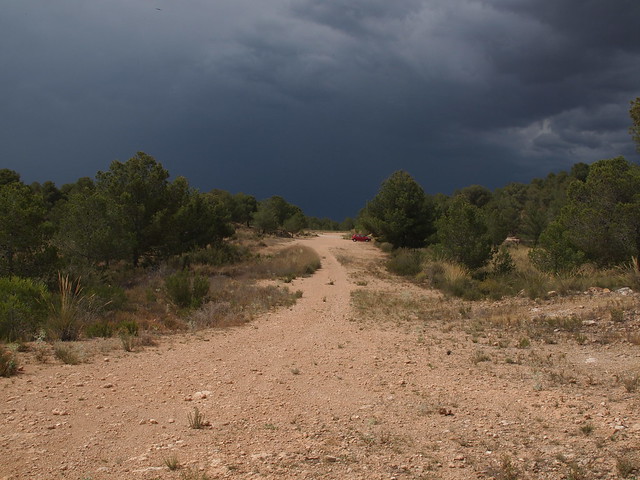 We didn’t find any views of interest around here, although we did get to see many many large crickets! 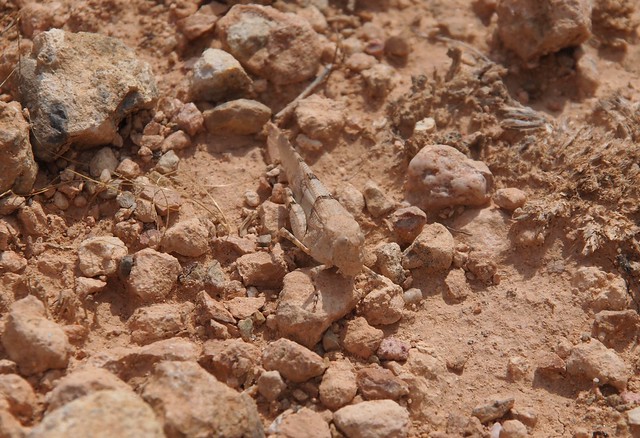 We decided to drive on a bit further, until we reached a closed up building. We’re unsure of exactly what it is, but there was a sign nearby pointing to a viewing spot. We walked along a short path, and found an amazing view of the valley below the hills:

This panoramic picture was created using this Demandar tool. I’ve used it on a few sets of pictures from the trip and it really seems to have done a great job with them! Down in the valley there seemed to be some sort of castle/fort/wall structure in one of the towns, but we did not have time to go and investigate. One of the local attractions is the Big Guns at Mazarron (which we also unfortunately did not visit), which may be related.

Back by where we had parked there was a large rock which I climbed, which gave another bit of view over the valley: 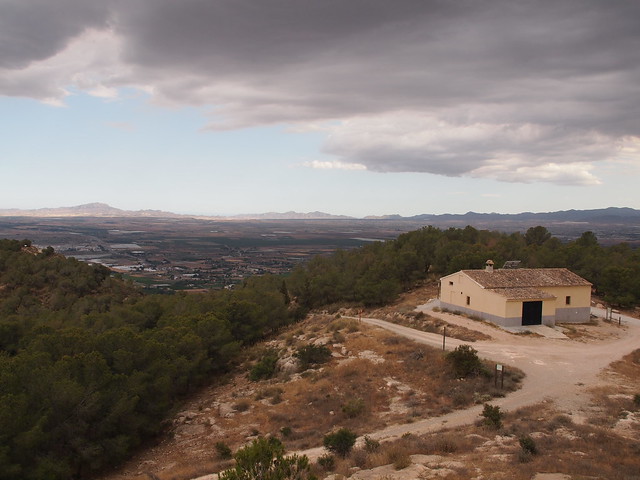 There were also several butterflys about which I have never seen before. They did not like staying still for pictures, but I did manage to get a photo of one: 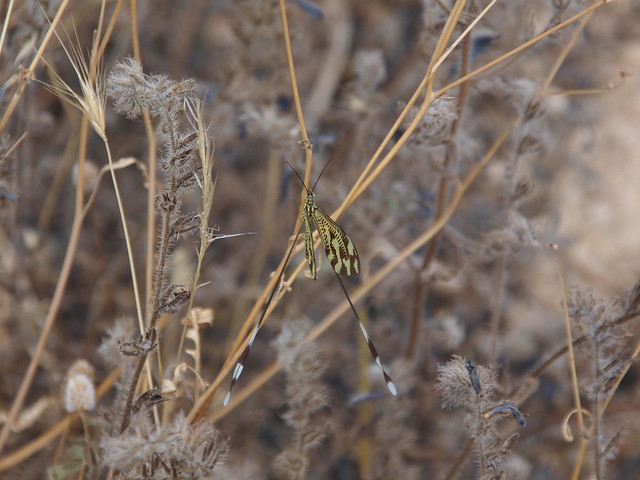 After this excursion, we returned to the hotel in time for dinner. Dinner was €18 each, but we decided that we would get it out of convenience. We regretted this choice. Free water was not provided, which should have been a warning sign. The meal itself showed signs of severe freezer burn:

I think that I would have felt ripped off if I had even paid €3 for my meal there considering what I got, and I would say that if you do stay at the hotel just eat in one of the local towns. Breakfast was also dire (but included in the price of the room, which was €42 a night for two). Lunch was OK, but I’m not sure I’d want to risk it on a repeat visit. I would be tempted to try and find a hotel in one of the nearby towns, or to even just drive the 50 minutes there and back from the flat we previously rented. The beds were OK, although it seemed odd that we were given two single beds when booking as a couple.

Next day there was some sunshine in the morning, and so we embarked on the buggy tour at about 10am. We had booked a three hour tour with the two of us sharing a single buggy. As it turns out we were the only ones booked on the buggy tour that day, and so we had a bit more leeway in the tour (i.e. we could stop and look at things as desired). My partner decided to drive first, while I took pictures from the passenger’s seat. We initially drove on some roads before moving to a dirt track. The guide drove a quad bike, and we followed behind in our buggy 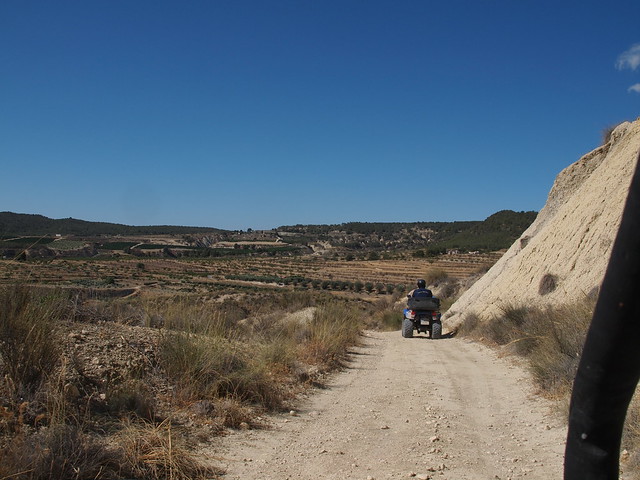 I took many pictures on the ride, which can be seen in my Flickr album for the trip. We drove alongside some interesting rock formations. 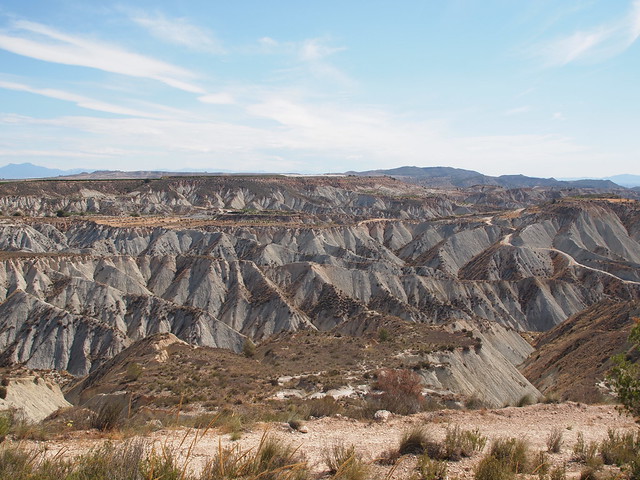 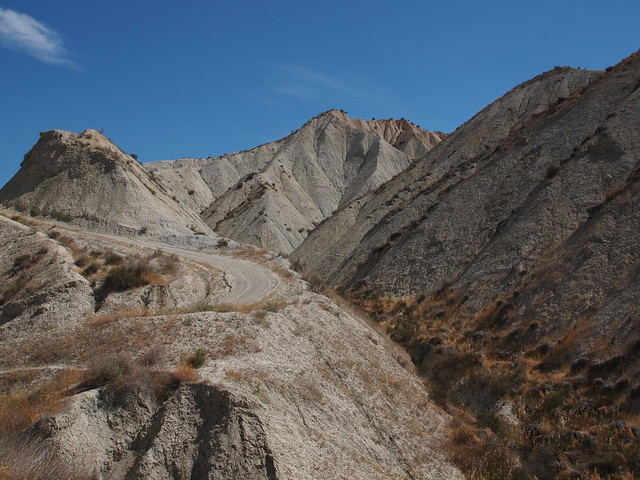 When I asked our guide what caused these, we were informed that this area used to be under the sea! Despite how high the hills look, our hotel (in the hills) is only about 350m above sea level currently. During the tour we pulled over a few times to take pictures/admire the views. We were able to see the lovely blue Barrancos de Gebas lake in the distance on one such stop. 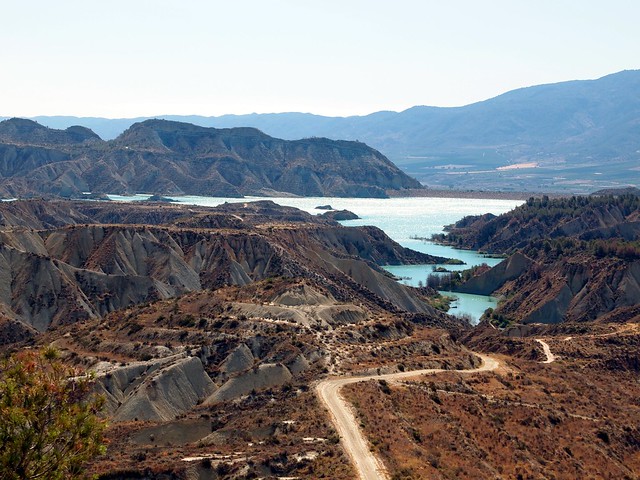 On a later stop we were able to look down in to part of it (panorama created with the aforementioned tool):

While we were stopped, the guide drew our attention to a hole in the ground. Apparently this hole was made by a male wolf spider, which is the largest type of spider seen in Europe. The one living in this hole is a male (females are bigger), but the guide was able to coax him out slightly using a bit of grass for a picture: 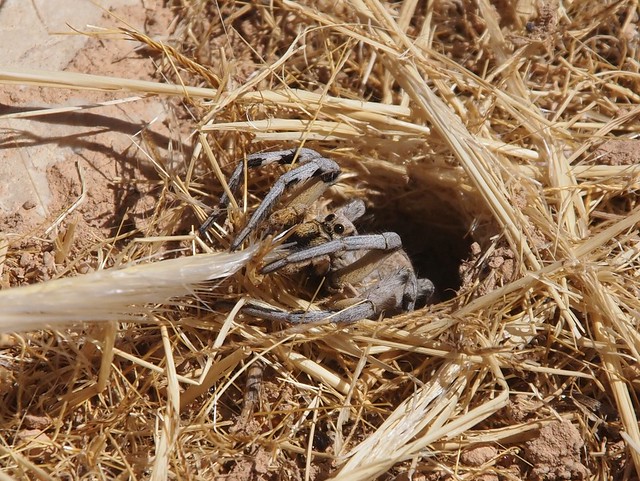 During this top I mounted my GoPro on my helmet, and began recording the drive. The full set of videos can be seen on my Youtube playlist for the trip, but the drive down to the lake for our next big stop can be seen here:

When we got to the lake, we went for a little swim. The water is amazingly blue, which is apparently caused by the silt. 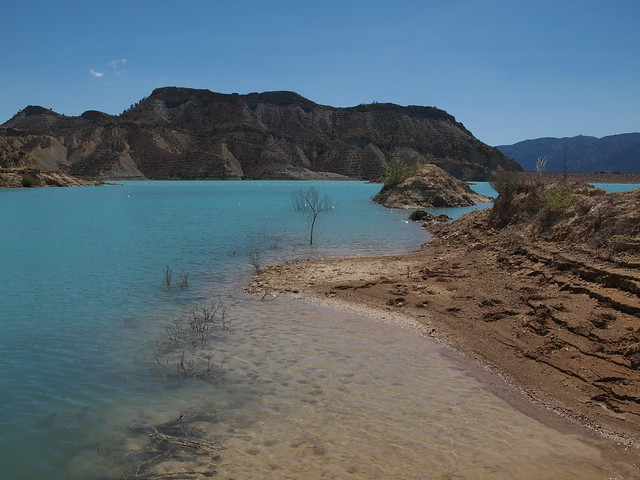 Unfortunately the silt makes the water quite cloudy, and so we were not able to see any fish. We were told that some herons live on the lake, the footprints of which could be seen in the mud through shallow water: 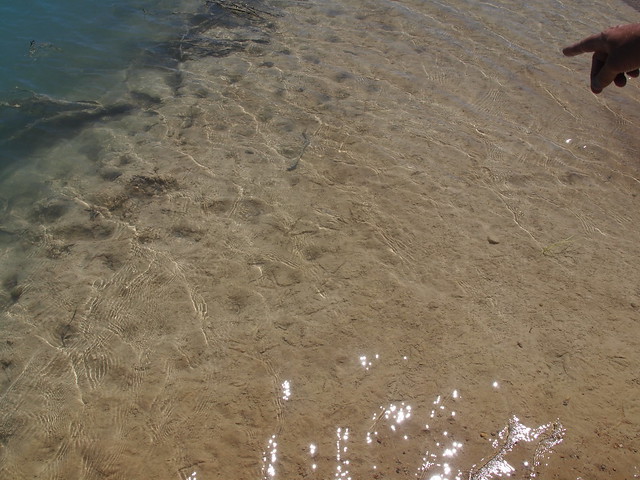 The guide mentioned that kayaking used to be done on this lake, and that it was a good way to spot herons (the buggys scare them away). The water level of the lake is currently being artificially raised, and no kayaking is allowed in it (an issue aside from the licensing one).

After swimming for a bit, we dried off and started the drive back. We drove back through what is apparently the second largest orange grove in the area 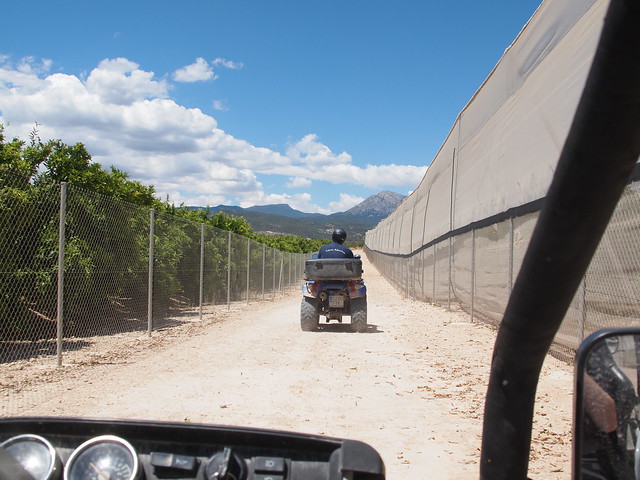 As we got nearer the hotel (also base camp for the buggy tour), I decided to try driving. Steering the buggy was both hard due to the lack of power steering, and quite terrifying. I am glad that I had let my partner do the majority of the driving! The weather was certainly getting colder and clouds were beginning to appear on the drive back and, as expected, the storm returned (and thus cancelled our paragliding). Hopefully we can return in the future and paraglide, as the views in the area really were amazing. Next time I’m not sure that I would stay in the hotel however, and if I did I certainly wouldn’t eat the food!

Us in the buggy: