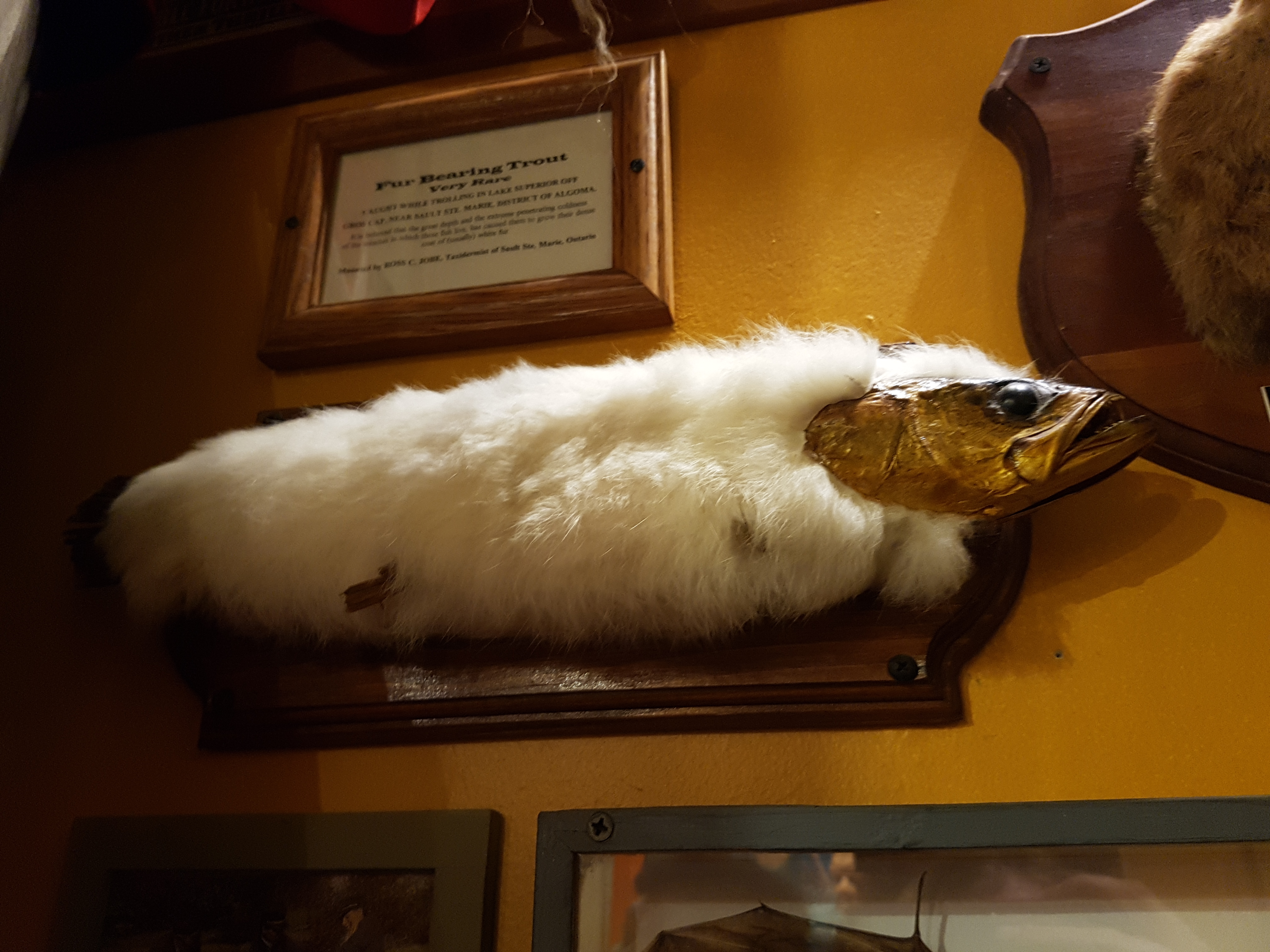 The Museum of the Weird

Apologies in advance for the mobile phone quality photos. This place had very dim lights, and was impractical for me to use my DSLR in!

Looking for things to do in downtown Austin, we spotted the Museum of the Weird. I didn’t need any more info than that, I was sold just by the name.

The museum enters in to a gift store. This store sells museum merch, and lots of other random stuff. Ever seen those little sprays that claim to give you an Irish accent? Yup. Novelty socks? Yup. Penis pasta? Yup. All that good stuff. And of course, what novelty store is complete without a bigfoot? 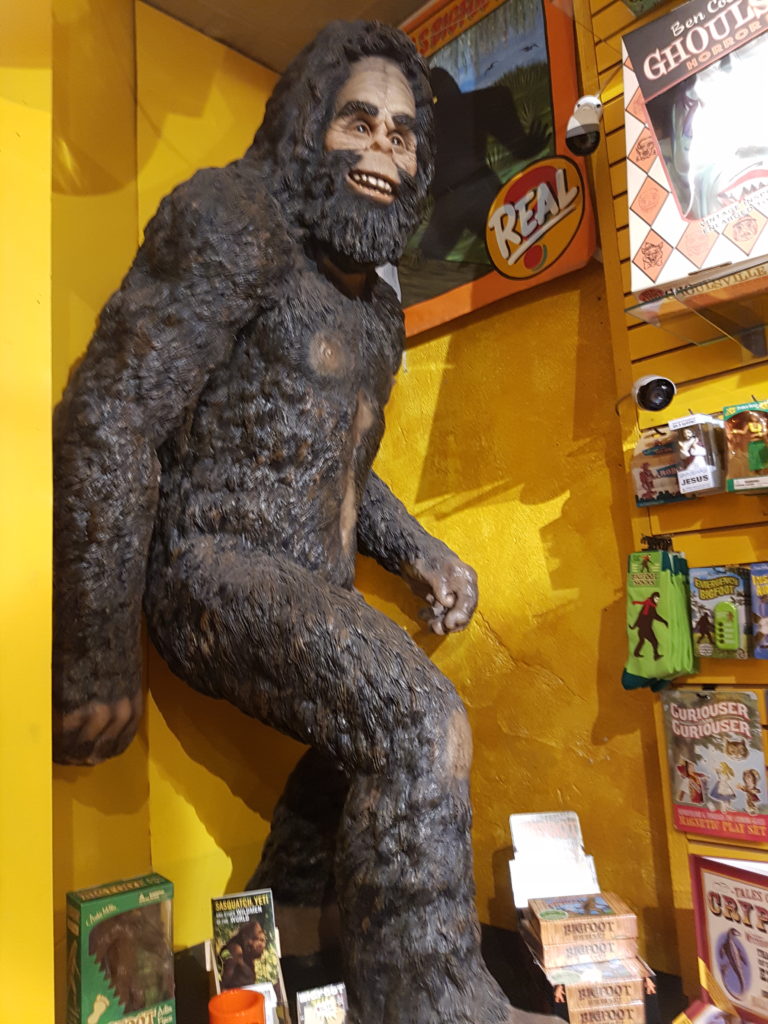 We grabbed our tickets, and the tour of the museum (through the back of the store) began.

To enjoy the museum, a certain suspension of disbelief is needed. One of the first attractions you see is this: 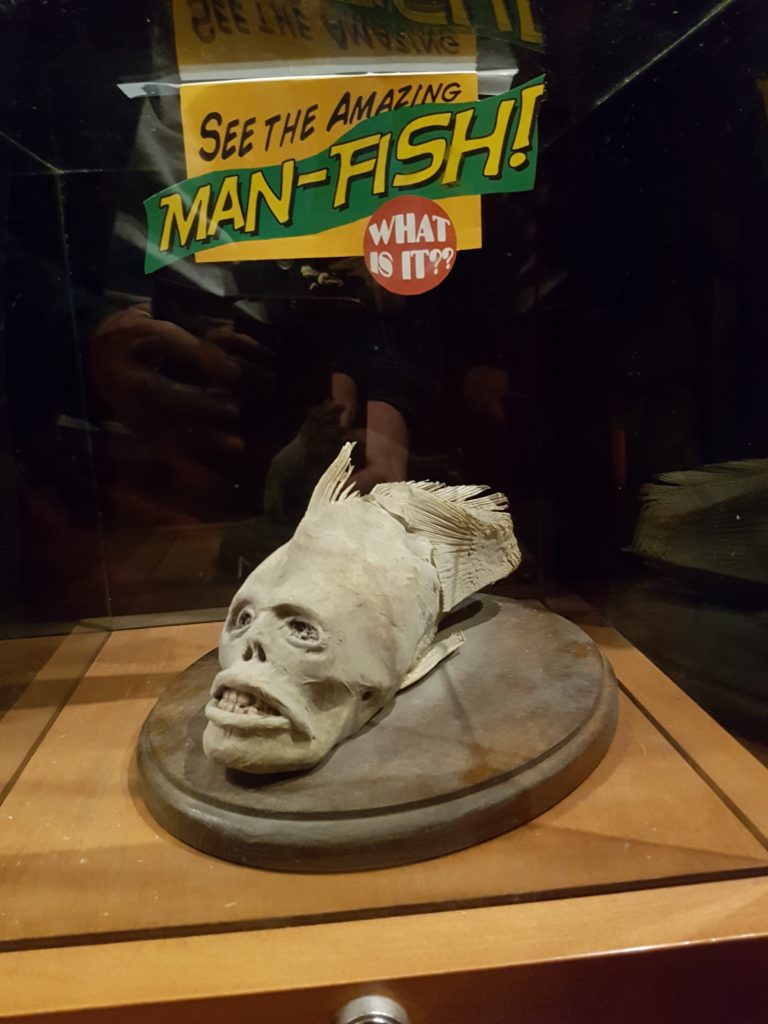 It’s a bit crap. But, it’s kind of funny! The overly dramatic retro signage adorning the exhibits really adds to the experience.

If you’re in to weird side-show attractions and the paranormal/cryptids, then I’d definitely recommend visiting here. The museum covers many of the classics, such as the Fiji Mermaid. 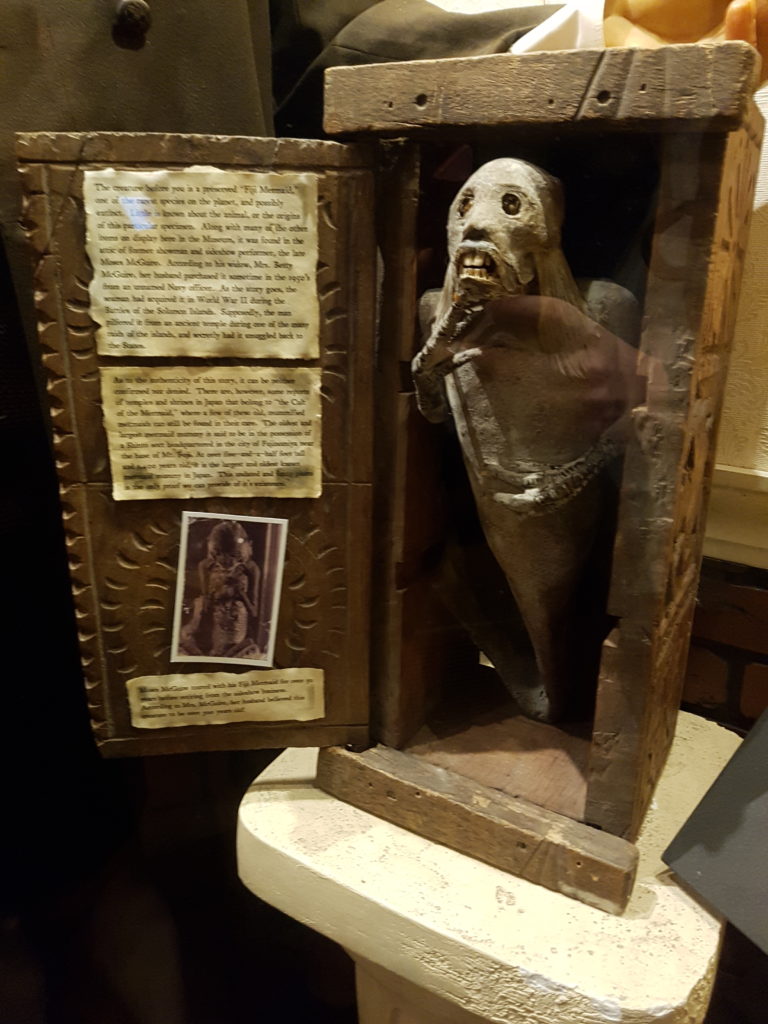 Fiji mermaids are a traditional staple of the American sideshow. They commonly consist of a monkey’s head and torso sewn on to a fish. The “original” Fiji mermaid is said to have been destroyed in a fire, but copies are common. Such beings are said to have long been constructed by fishermen in Japan and the East Indies for religious purposes. An American sea captain purchased one for a hefty sum, before it ended up eventually being sold to a sideshow in the US. I suppose that once one sideshow had a Fiji mermaid everyone wanted one, fueling the prolificacy of the clones. In a way, it does make sense. If it’s a real species then there’s bound to be more than one of them kicking about!

Next up, my favorite item in the entire museum: the fur-bearing trout. 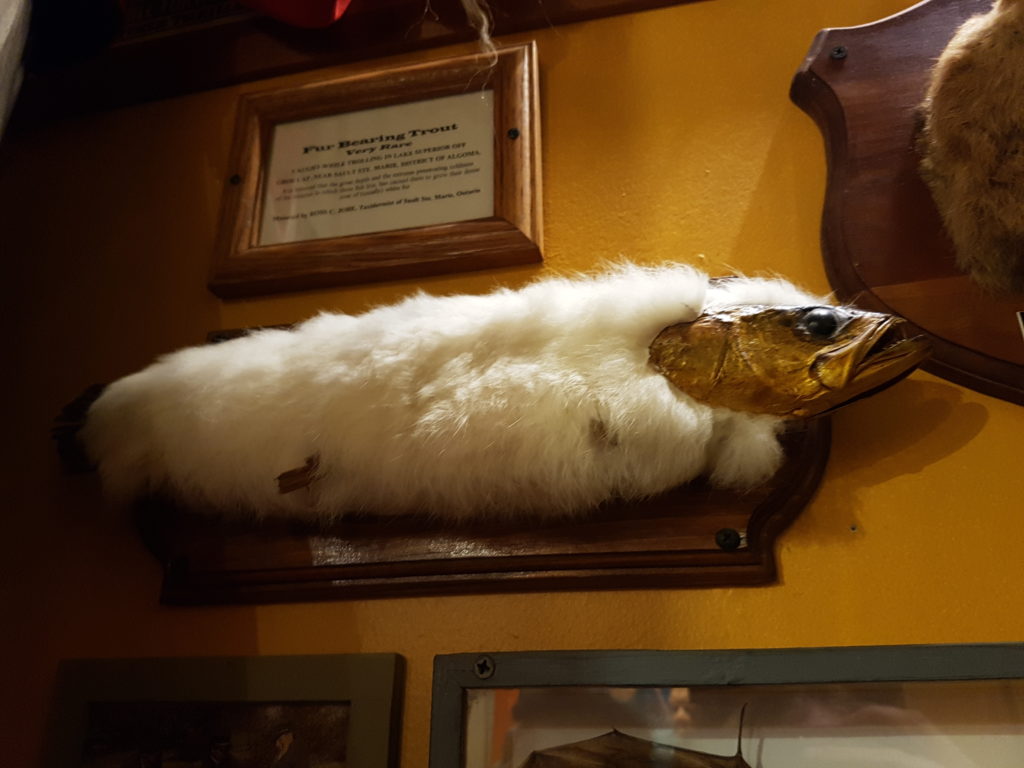 Now I had never heard of these before, but they do make sense when you think about it. Native to the cold seas of Iceland and North America, these fish have grown fur coats to keep warm. It makes perfect sense! Some even claim that the wild fur-bearing trout can be found in rivers of Arkansas after large amounts of hair tonic were spilled in to a river (really). Again, there are many examples of these furry fish in sideshows around the world.

Of course, no sideshow exhibit would be complete without a jackalope. 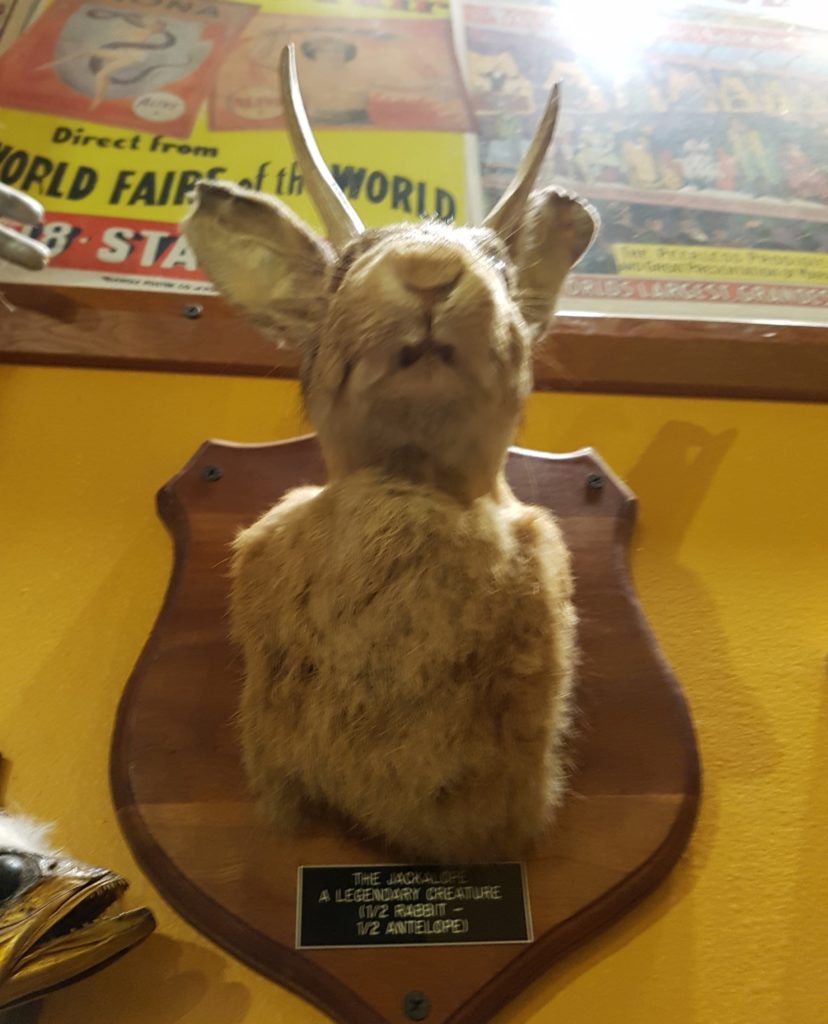 An American folklore staple, a jackrabbit with antelope horns. I’d disagree with the sign calling it half rabbit, half antelope. There’s a slight size discrepancy between a jackrabbit and an antelope. There’s a lot of mythos surrounding the jackalope. Wear stovepipes on your legs when hunting to protect yourself from being gored by these creatures. Jackalope milk fetches a pretty penny due to the danger associated with its harvesting. Jackalopes are able to mimic human voices, which seems like an excellent trait in a pet (see: parrots). If only they could be domesticated somehow!

This section of the museum is incredibly cluttered with preserved creatures such as those seen above. It’s hard to take it all in with the speed at which the group moves, as well as the narrowness of the corridor through which you’re walked. The sheer scale of the exhibits is also overwhelming. The walls are absolutely covered! Everywhere you look, there’s more. I looked up to see a mer-boy hanging over the edge of the exhibition cabinet I was stood by.

After this section of the museum, you are brought to a small courtyard. Here some history is given on the areas rich paranormal history, and the history of the building itself. Apparently Johnny Depp lived above in the apartment above the store for a time in his youth.

From this courtyard, we were shown the true piece de resistance of the museum: the Minnesota Iceman. Cameras were not allowed to be used in his lair. Presumably because, as noted by my friend, we were in fact in the building’s garage. Spotting the garage door opening mechanics detracted from the immersion a bit, but somehow made the experience a lot funnier. It was hokey.

In to the garage we were herded, and sat on rows of church pews. A short video was played to inform us of the history of the iceman. Originally known as the Siberskoye Creature, the figure encased in a block of ice is said to have been discovered off of the coast of Siberia by a Russian seal-hunting vessel in the ‘60s. The figure within is about 1.8m tall, and covered in fur.

The iceman has been frequently examined. In early days people assumed it real, but in later days it was described as being a latex model. The owner, one Frank D. Hansen, responded that this was because the examined exhibit indeed was a latex model. He claimed to have taken the real article off of exhibition for fear of being charged with murder of what may be a form of human. Comparing photos of the iceman over time, the form of the humanoid within can be seen to change. Sometimes the mouth is open, sometimes it is closed. The arms have changed position slightly. It is suggested that this stems from Hansen having defrosted and refrozen the latex model between outings.

Alongside the video, our guide talked to us about how the iceman ended up at Austin’s Museum of the Weird. The owner of the museum, Steve Busti, saw the iceman exhibit as a child. He credits this with sparking his interest in the weird. At some point, Hansen had stopped displaying the iceman. It was said to have been lost. Then, one day, the family claims to have found it. Busti manages to track it down (through channels unknown), and purchases the iceman for the pricely sum of $19,000.

After we have been given this backstory, we are invited to shuffle alongside the icecream freezer at the side of the garage. Within it is the iceman. It’s pretty hard to see much. The lighting in the garage is dim, and the ice is clouded. A figure can be seen inside, but not in much detail. There are glimpses of hair, and the fingernails of the hand curled towards the top of the ice block.

Is this the real Siberskoye Creature? Who knows! I’d recommend visiting for yourself, and making your own call.

Exiting the garage, we head up a staircase in the courtyard to the room above the garage. We pass a man wearing a fez, sat drinking a coffee. As it turns out, we were to learn more about him later.

The room above the garage is dedicated to monsters from media. You can take your picture with King Kong, and meet the creature from the Black Lagoon! 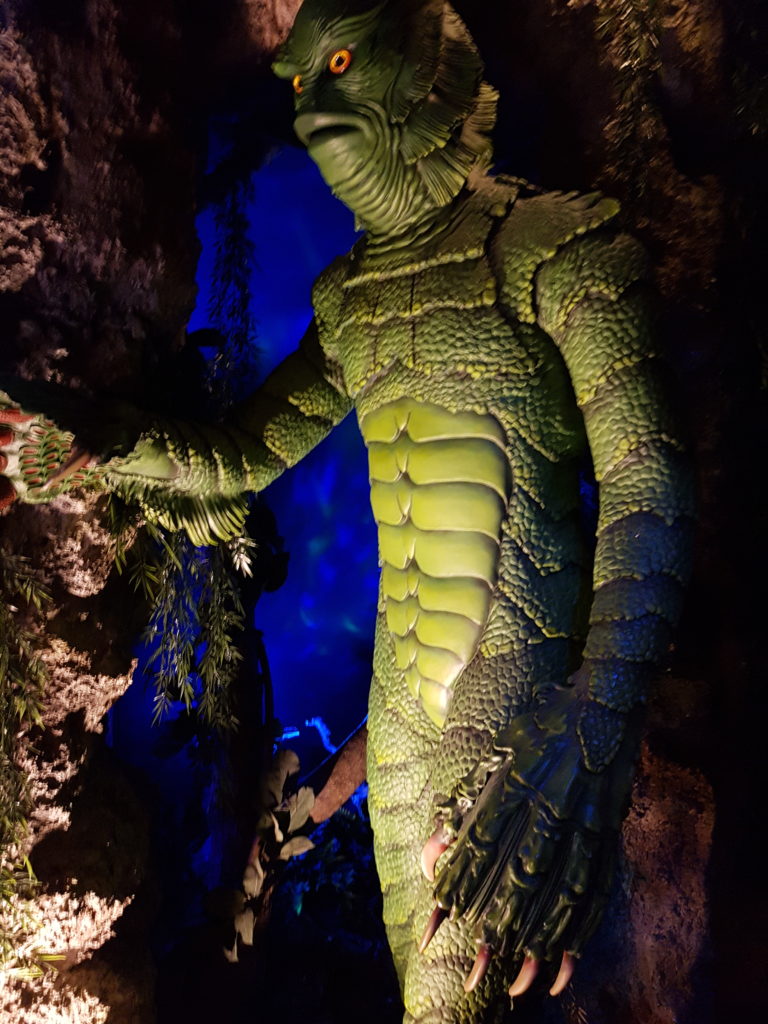 The exhibit features a wide cross section of movie monster waxworks. Dr Jekyll/Mr Hyde, Nosferatu, Dracula, aliens; it has it all. 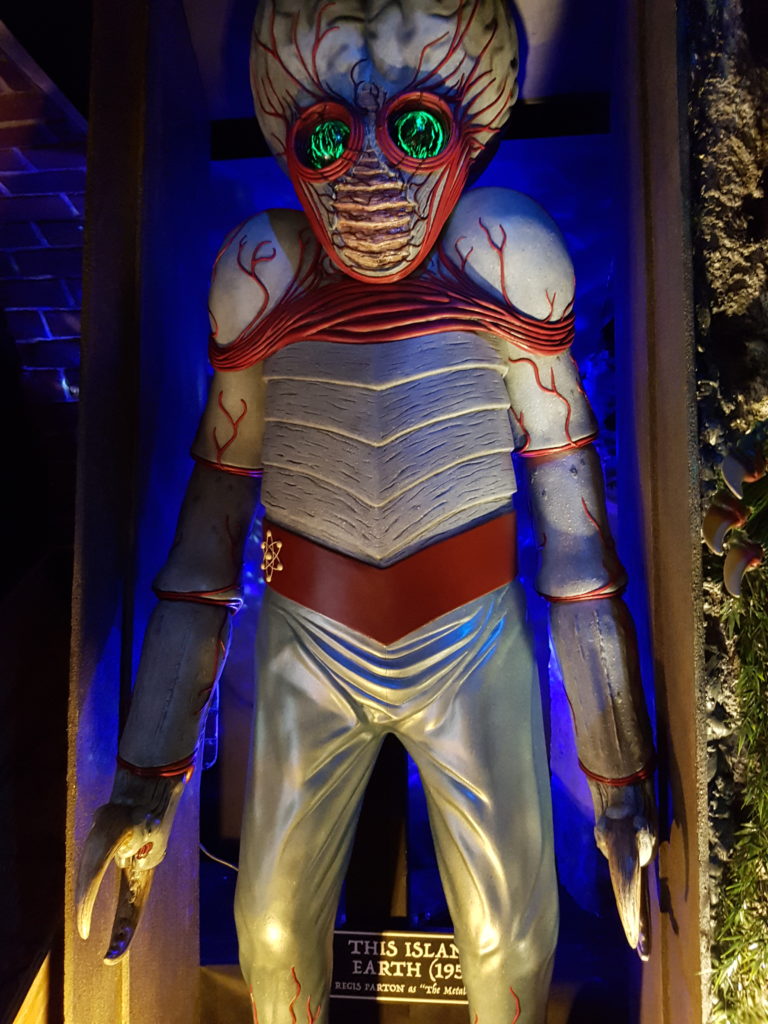 From here, we move on to the final main exhibit. A good old fashion freak show. The man in the fez greets us at the door, and leads us to his stage.

First up for the man who feels no pain, he stuck his hand in a raccoon trap. 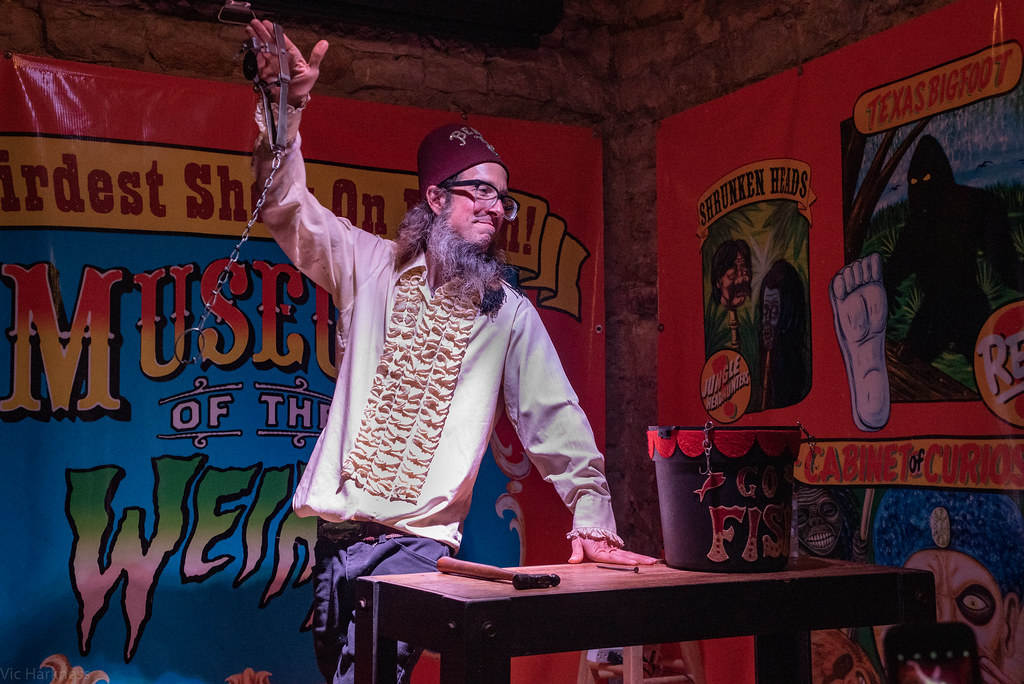 Members of the audience were invited to tug on the chain to demonstrate that it was firmly attached. He told us that the trick is to put all your fingers in at once to spread the force, or it’ll break your finger. As he said this he demonstrated the odd angles of a previously broken finger.

Next up, the classic “nail up nose” trick! 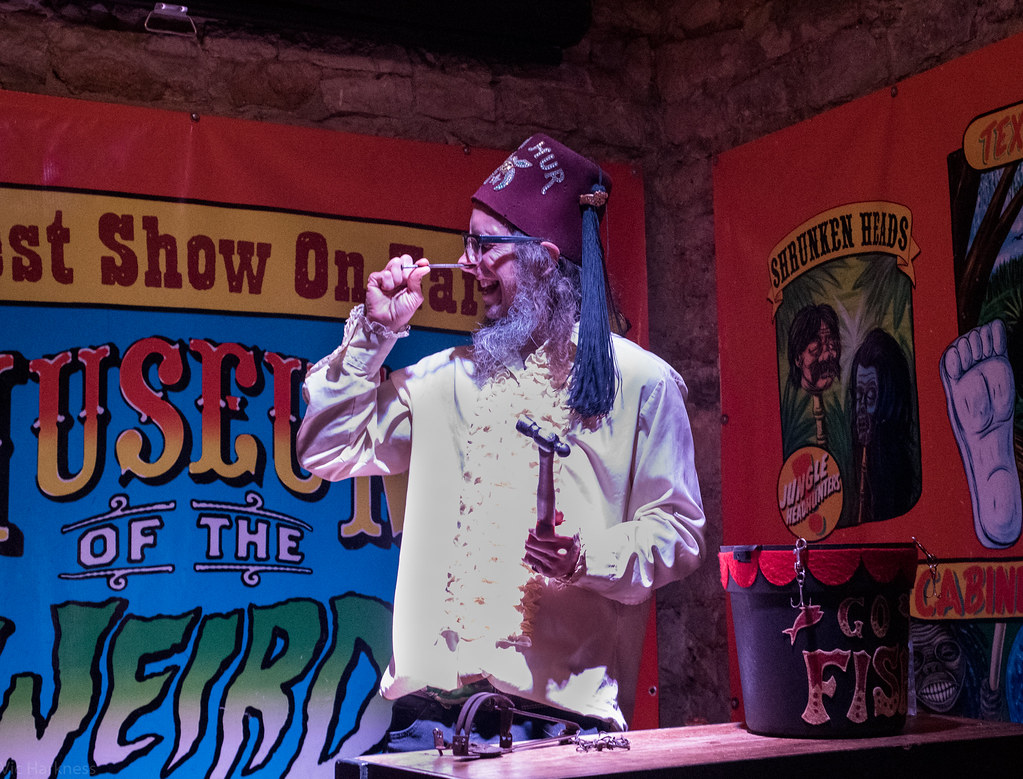 To add to the gross factor, he made a show of licking the nail (“to lubricate it”) prior to insertion.

He used a hammer to make sure it really got in there. 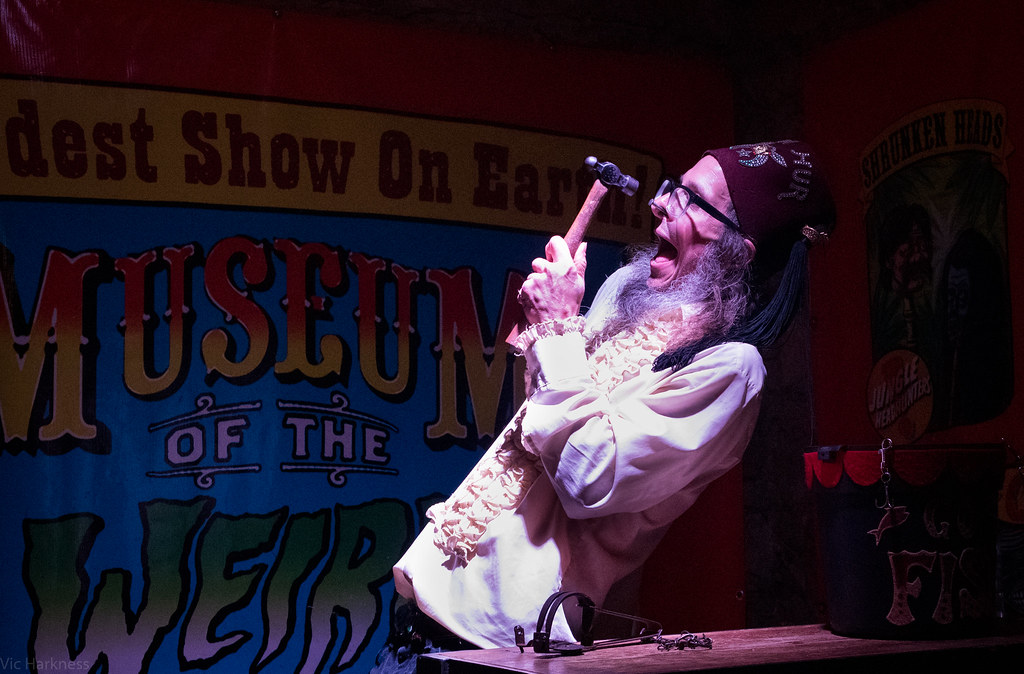 An audience member was invited to the stage to pull the nail out again with her teeth.

For the final show, our host hung fishing lures from his eyelids. 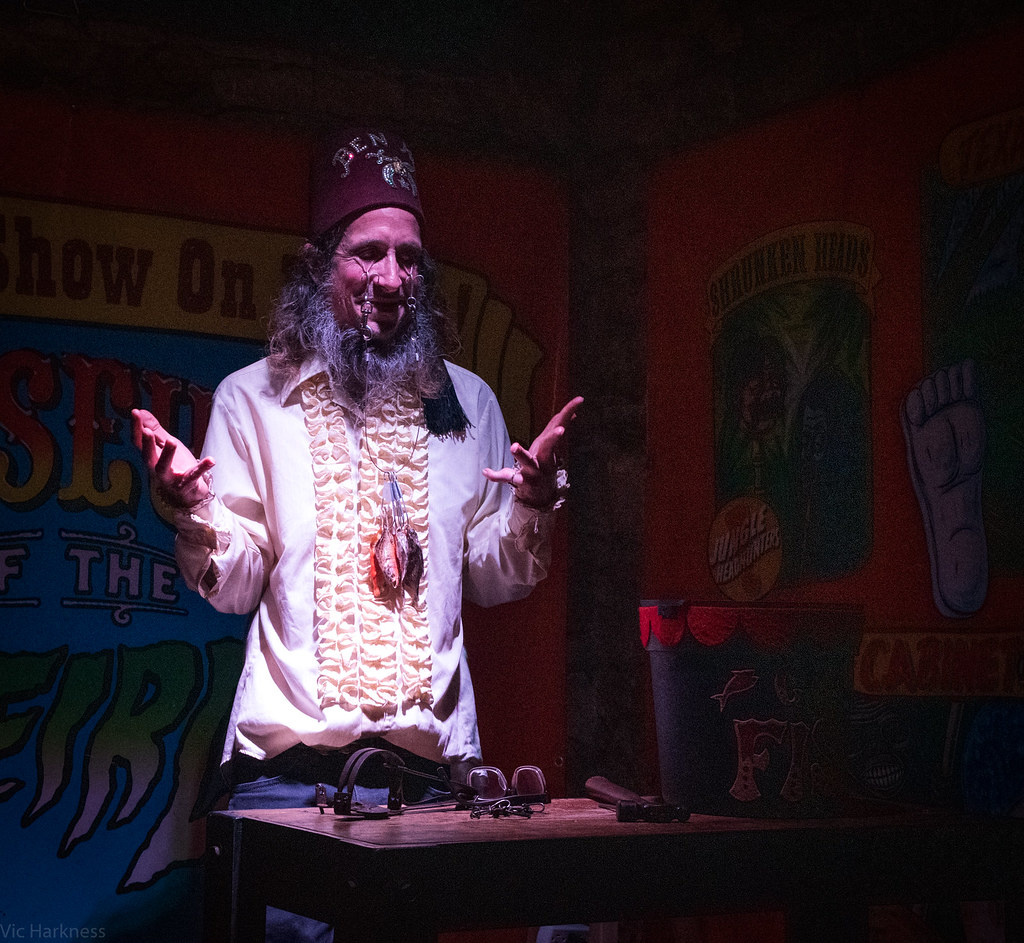 A bit less dramatic than the previous two acts, but still pretty interesting!

Show over, we were shuffled back downstairs to the corridor we had entered through. As the tour was now over, we could look around at our own pace. In the back of the exhibits, we found a section of taxidermy animals with birth defects (most commonly, two heads). 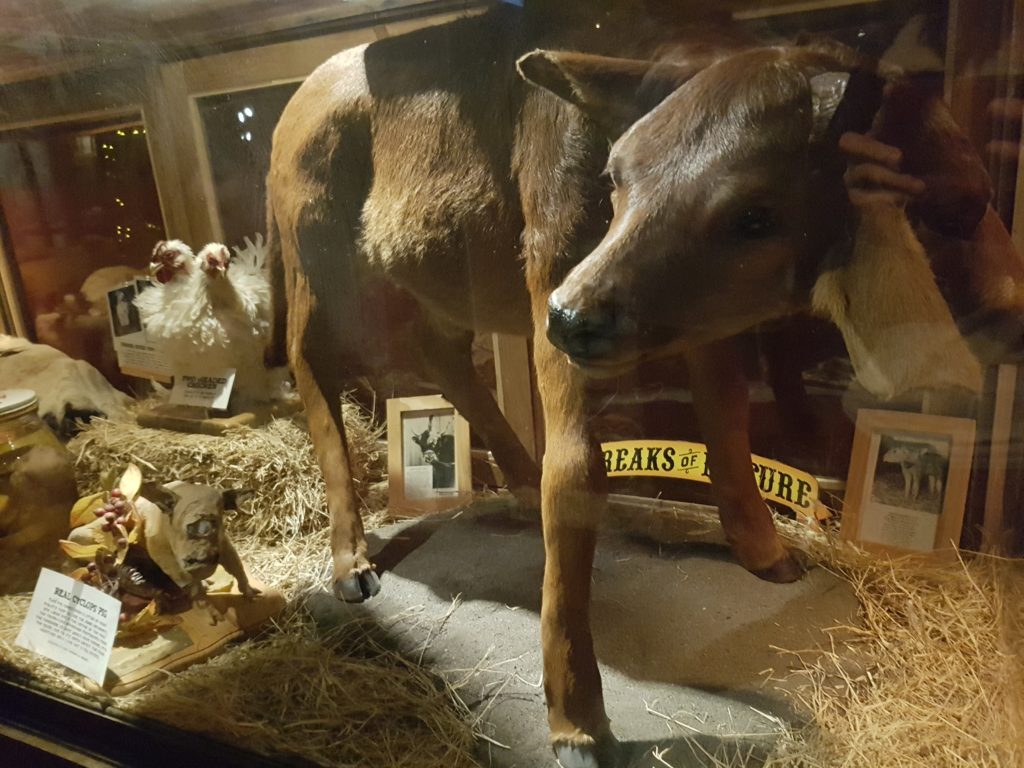 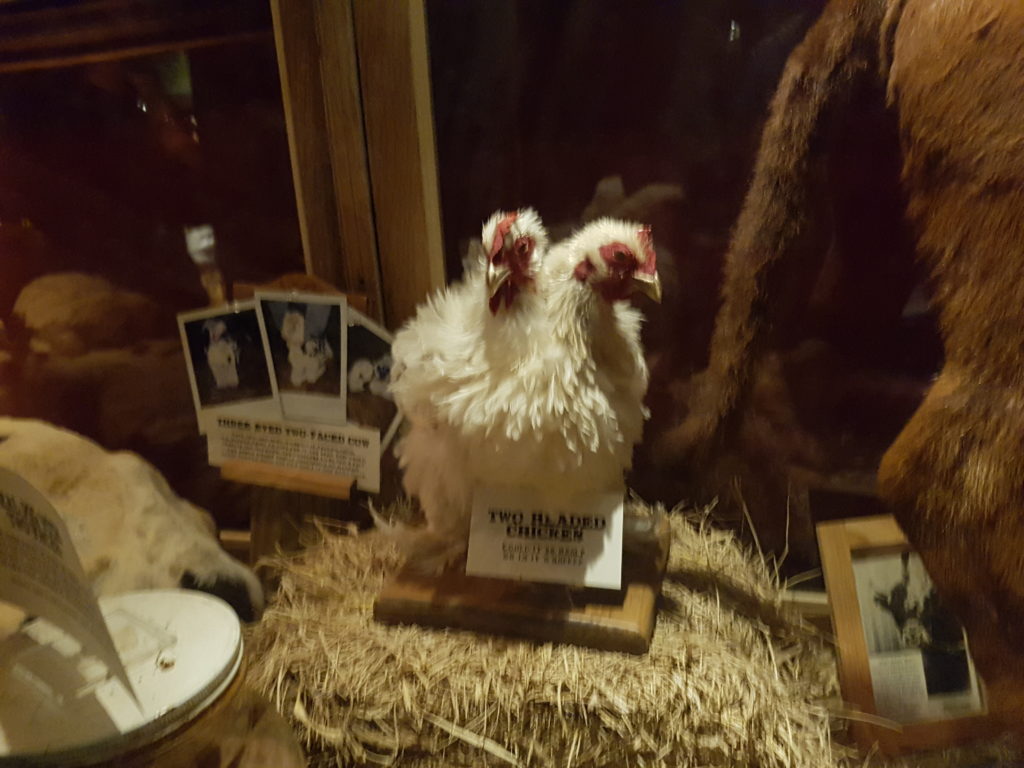 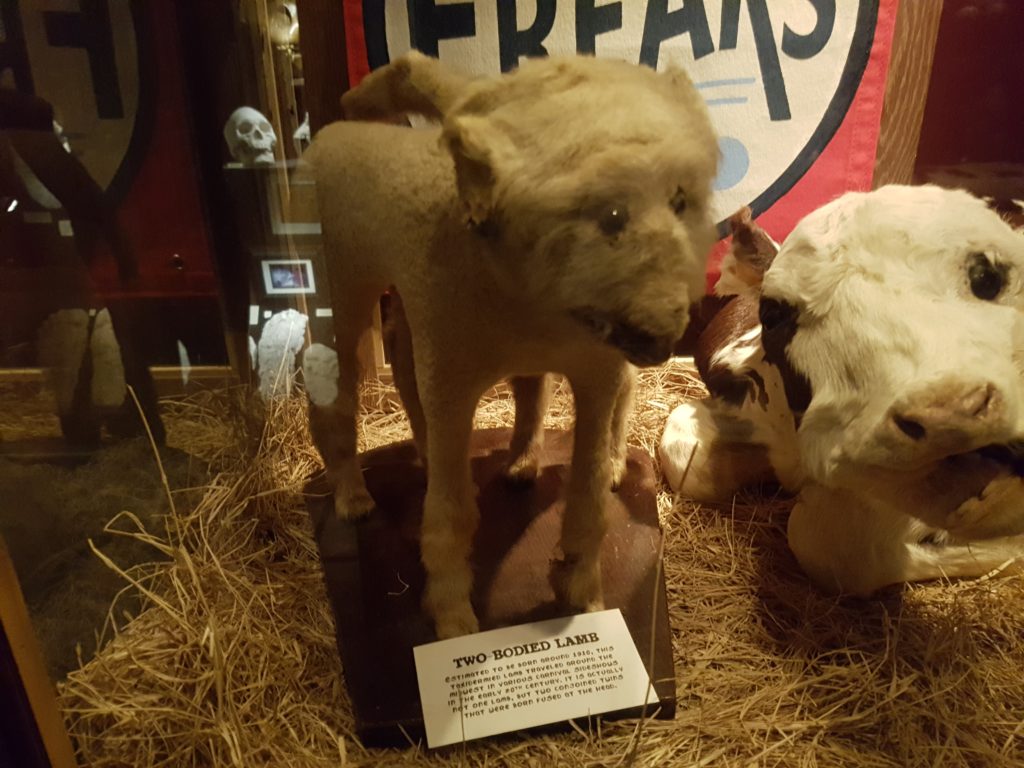 A nearby exhibit demonstrated defects in humans. Most interesting was the skull of someone with a form of bone cancer.

There were also a skull showing the scars of trepanning. 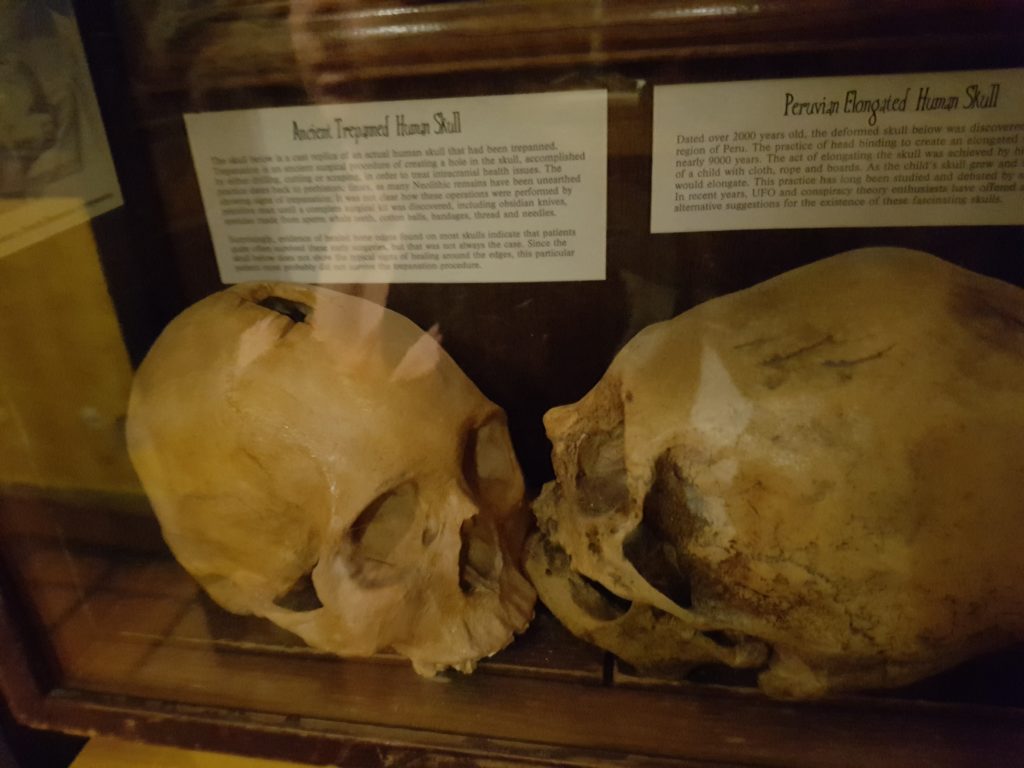 Opposite the taxidermy animals was a skeleton, claimed to be both real and haunted. 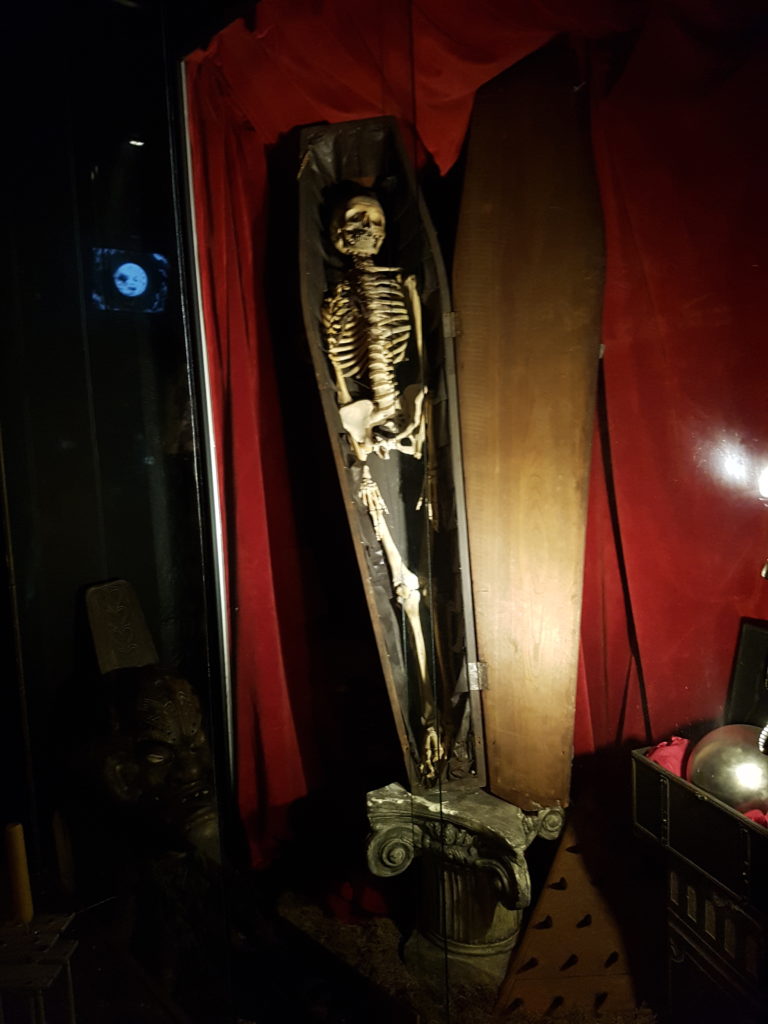 I suppose for a place like this, you need to be haunted really. 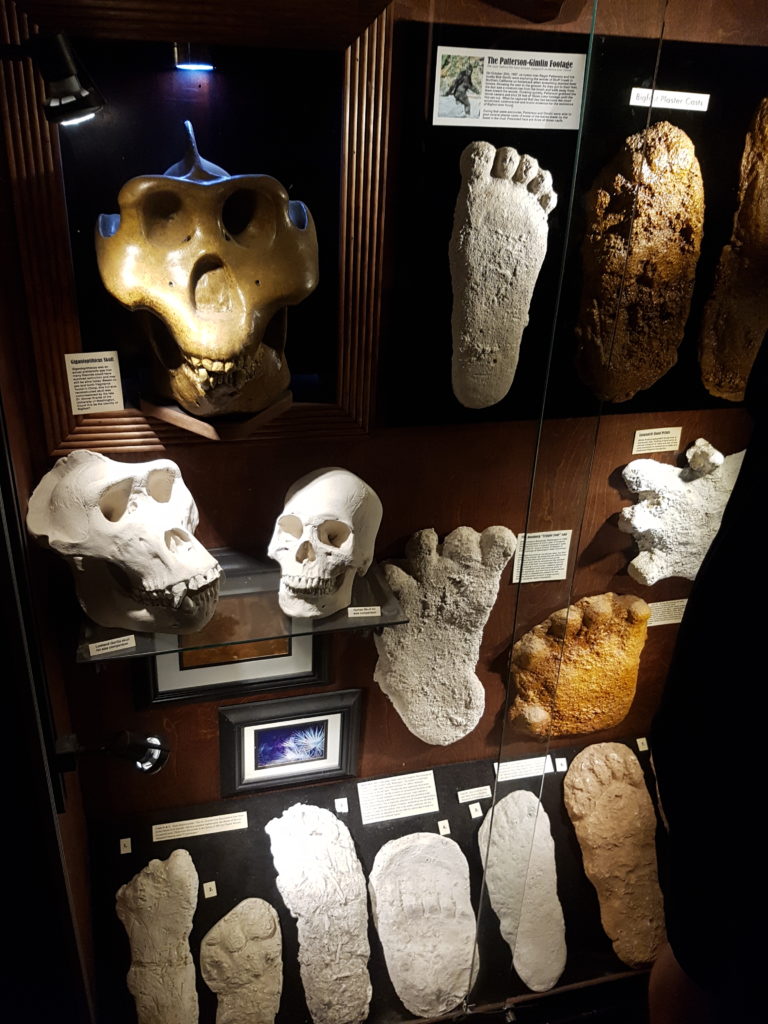 Near to the exit it also features a model of the xenomorph from Alien, because why wouldn’t you. 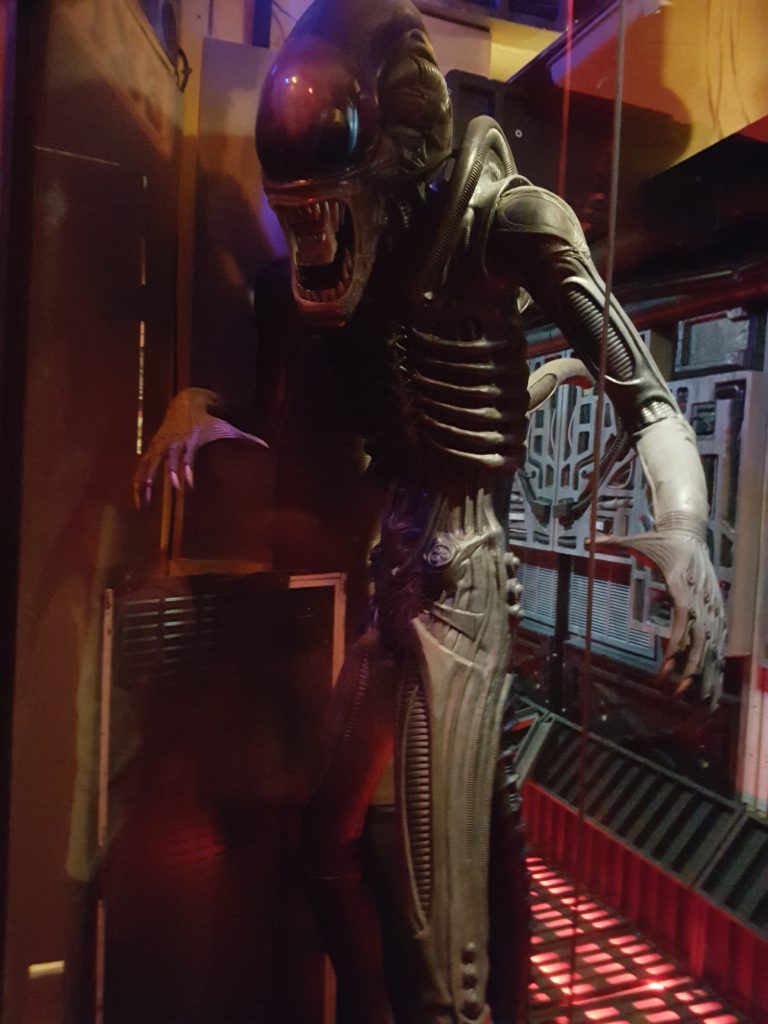 If you ever find yourself with time to kill in downtown Austin, I’d highly recommend a visit to the Museum of the Weird. The mixture of static exhibits and live shows was really great, and it was nice to learn more about the history of such a famous exhibit as the Minnesota Iceman!

This post only contains but a fraction of all the exhibits the museum has to offer. You’ll have to go see it all for yourself!