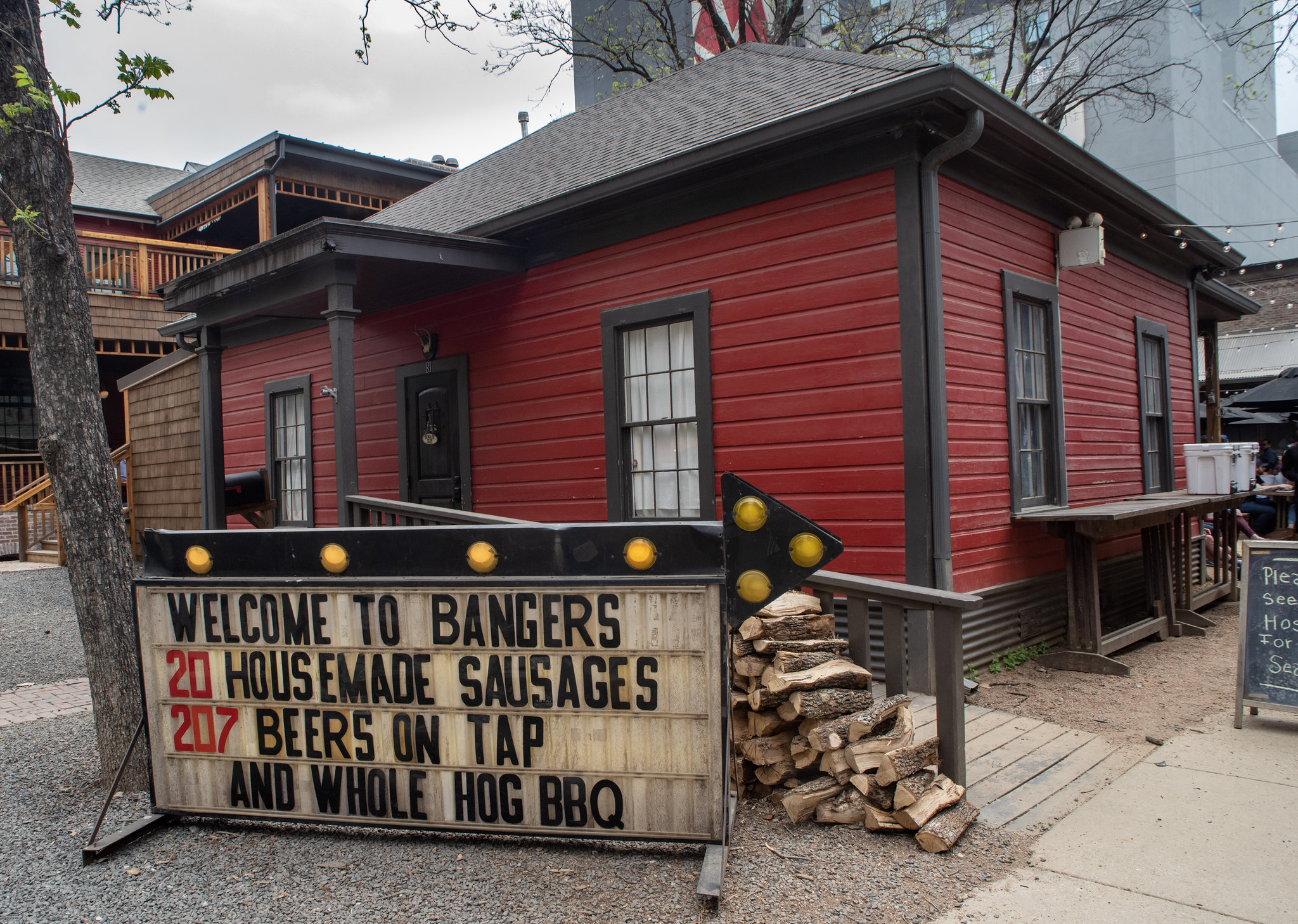 Last month, I was in Austin to speak at a conference. Due to being ill at the same time (just my luck!) I didn’t get much time to sight see- just one day. I spent that one day wandering around largely, although the weather wasn’t great.

First off, I went to the waterfront of the Colorado River. 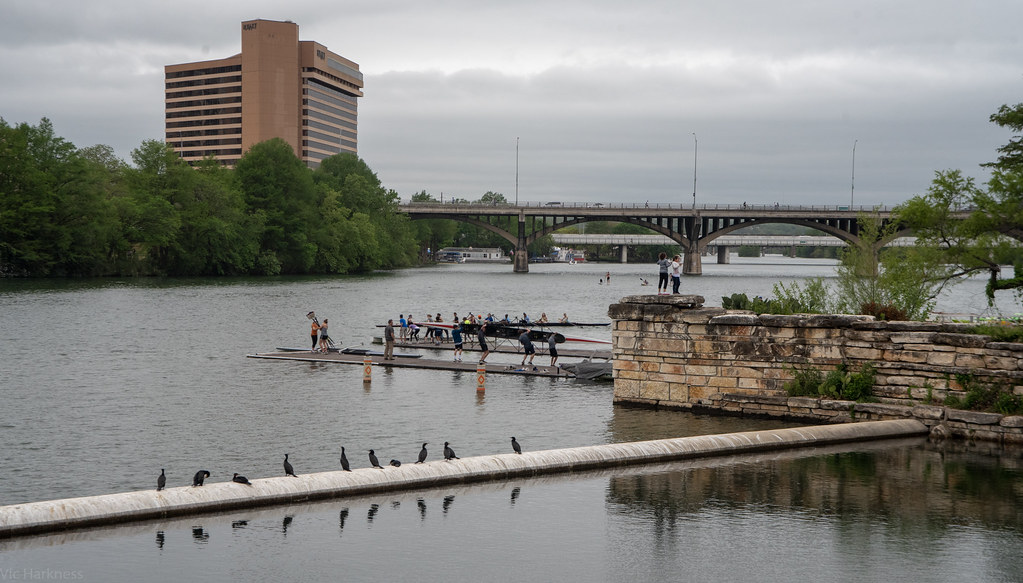 From alongside the river you can rent canoes and boats to take on to the river (as can be seen in the above photo). It can also be seen that the waterfront was dotted with birds, including cormorants. Good to see!

Alongside the waterfront is various pieces of art. This includes the Chinese artist Ai Weiwei’s Forever Bicycles. 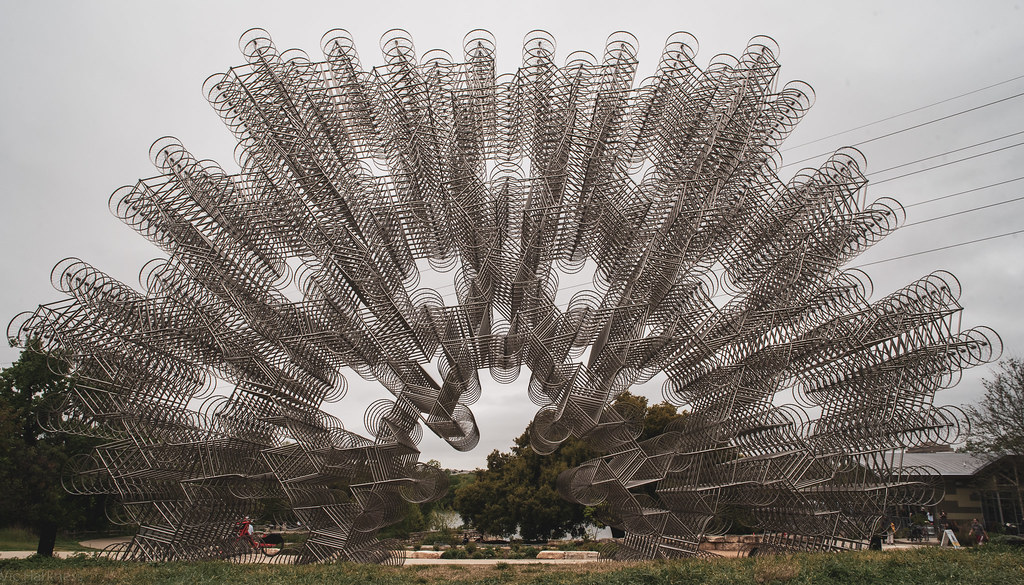 Ai Weiwei has created various versions of this artwork, all using bicycles. This is done to celebrate the extensive use of bicycles for transportation within his native China.

As I walked along the waterfront, I noticed balls of moss in many of the trees. As it turns out the name for this is “ball moss”. Makes sense. 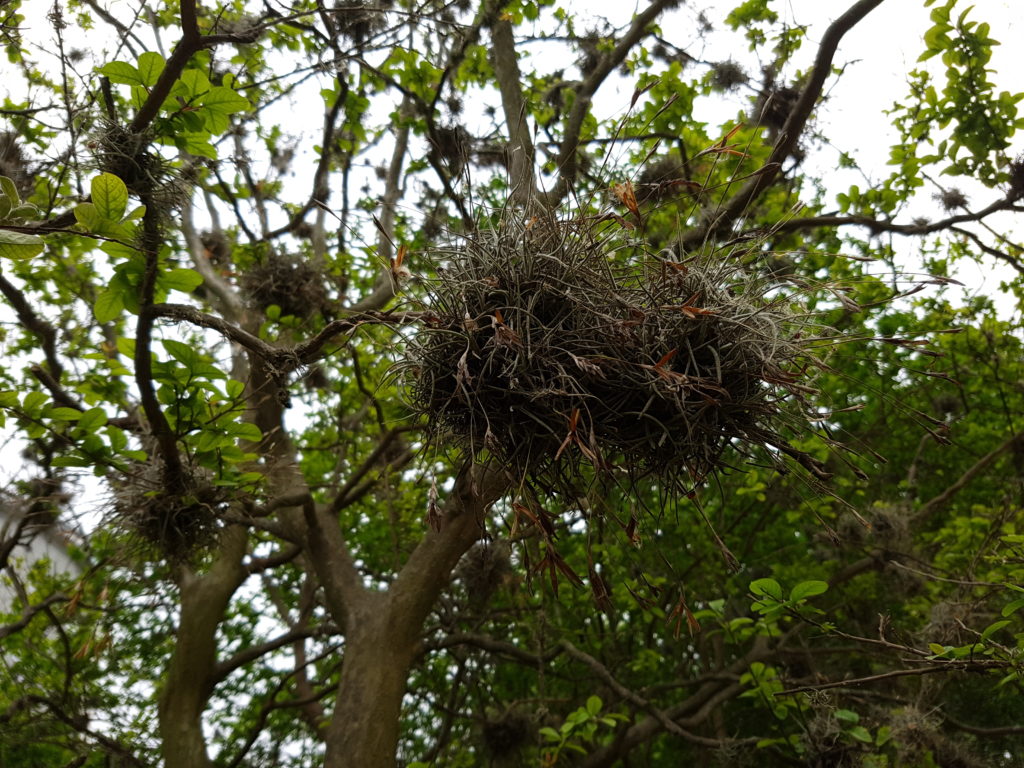 This ball moss is an epiphyte. It pulls all of its nutrients from the air, and is not parasitic. I was told later on during my trip that it can be beneficial to its host tree, as it helps to store moisture and protects some of the trees surface.

Walking along the waterfront, it appeared that everything was art. Even the public toilets looked like this: 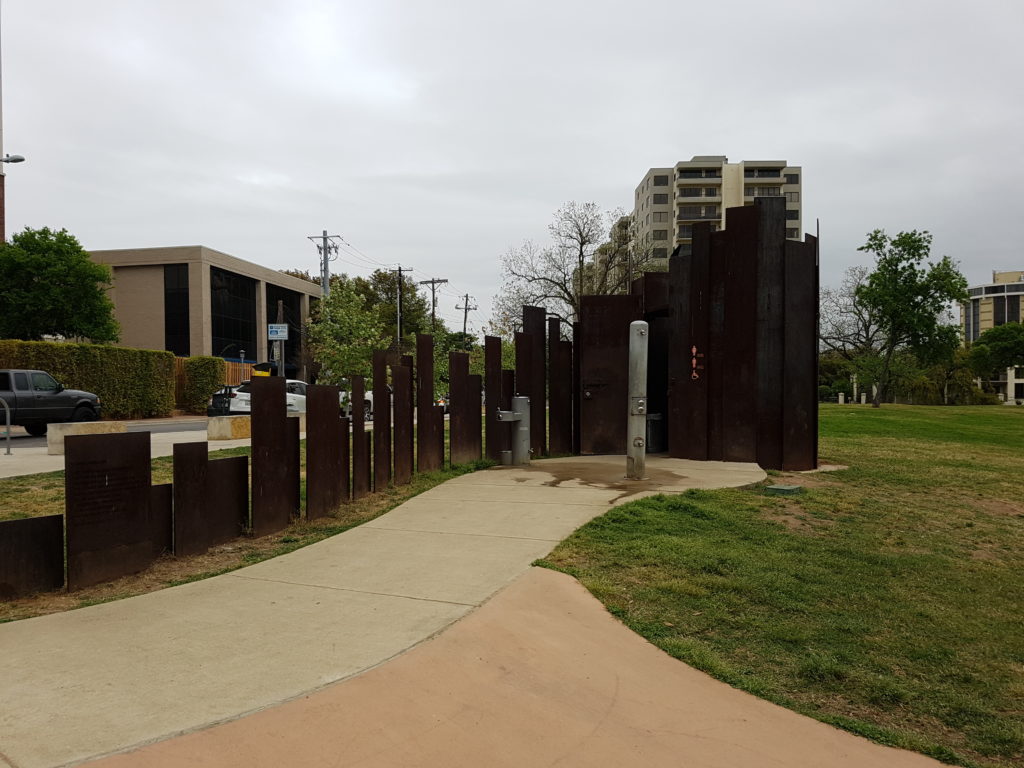 After walking along the waterfront, I decided to head up to the famous Rainey Street. Rainey Street is a nightlife hub for Austin, and certainly a lot of people at the conference spoke fondly of it. As I was there in the early afternoon of a week day, there wasn’t a whole lot going on. 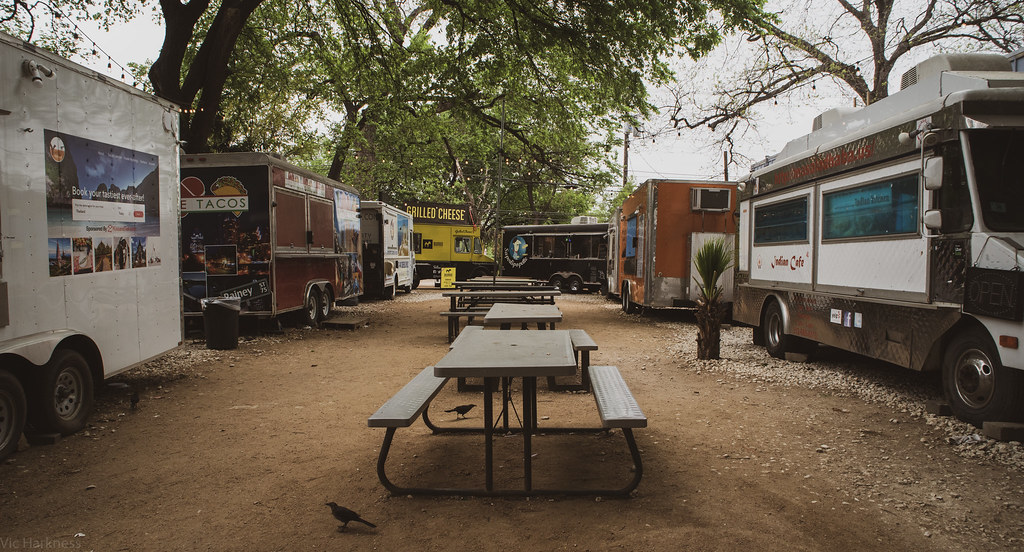 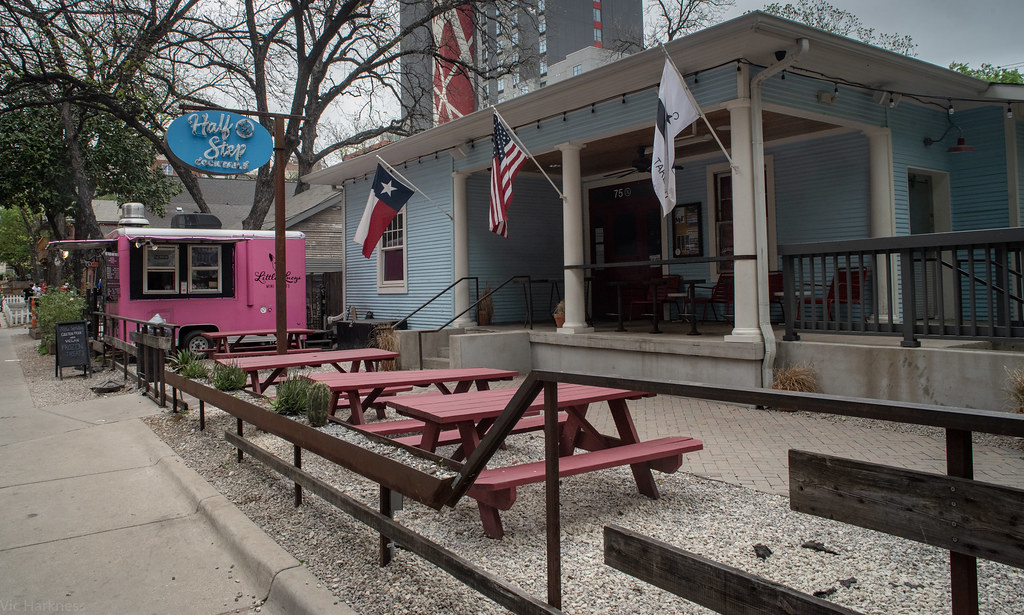 I popped in to a small bar for a caffeinated drink, and discovered one of the sketchiest bathrooms I’ve ever seen. 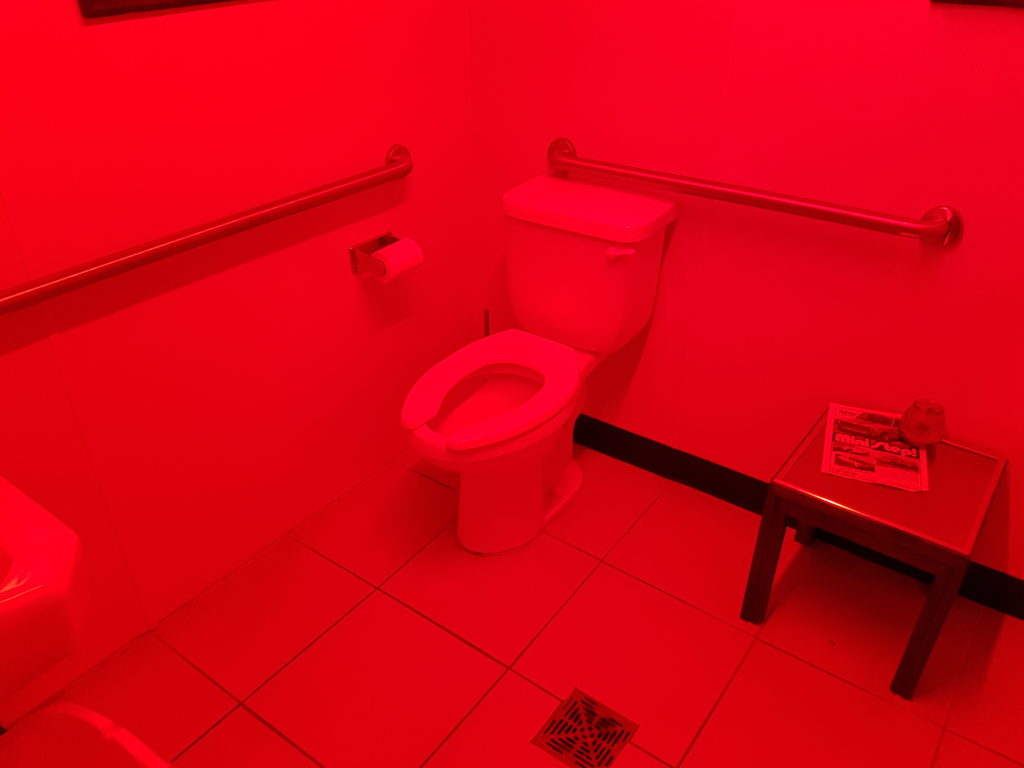 If the red light in this picture hurts your eyes, trust me: it was way worse in person. I liked the drain in the centre, and the mirror table. Really tied the room together.

Wandering on a bit more, I saw packs of roving cyclists. 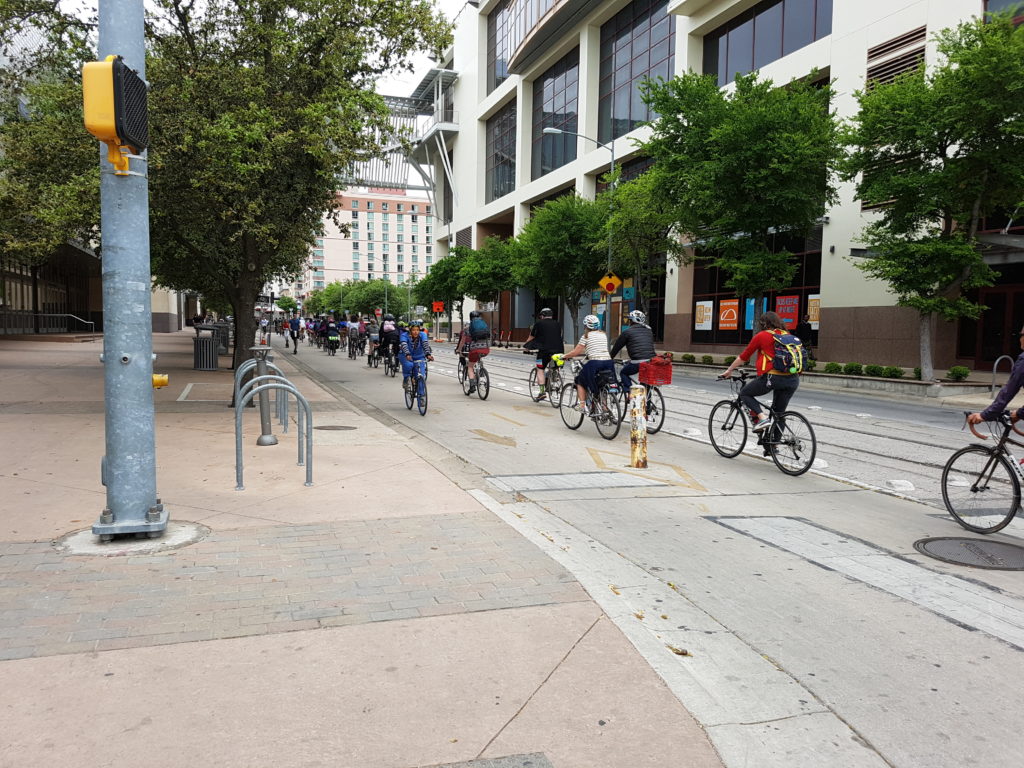 Bicycles seem to be a very popular mode of transportation in downtown Austin. Bikes similar to London’s Boris Bikes are dotted around on every street corner. These ones (operated by companies such as Lyft) do not require you to dock in, you just drop them and go. Interestingly there were also rentable adult-sized scooters here. I expect that one day they’ll end up in England too.

After wandering around aimlessly a bit more, I headed on to the two main destinations I had in mind: the Museum of the Weird, and the Texas Capitol building. These are both worthy of their own posts, which should be appearing soon!