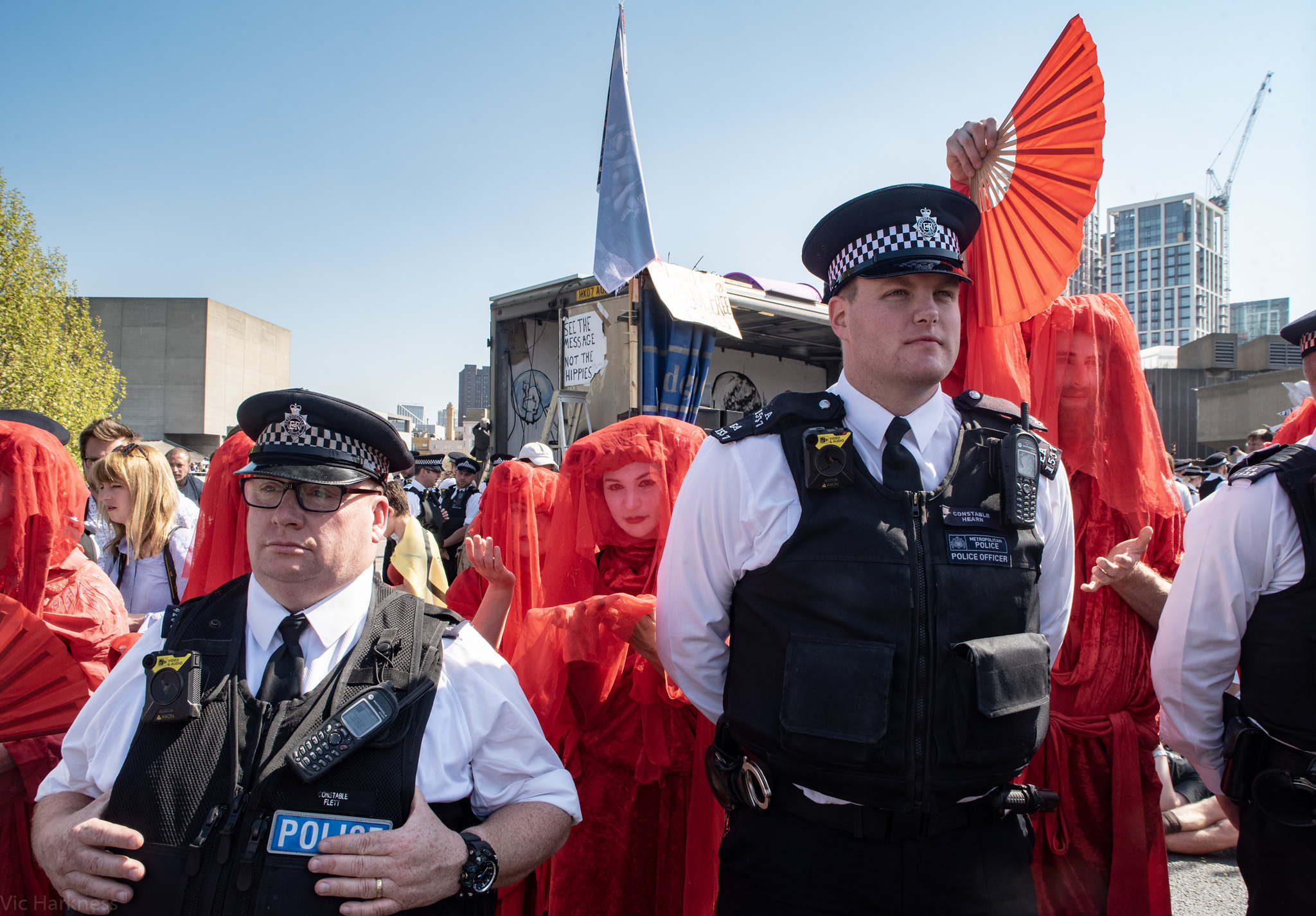 On my massive tour of the London Protests last week, I returned to Waterloo Bridge. On my previous visit, not much had been happening. On this visit (a sunny weekend over a bank holiday weekend), there was a lot more going on.

Approaching the bridge from the south side, I was greeted by some new grafitti. 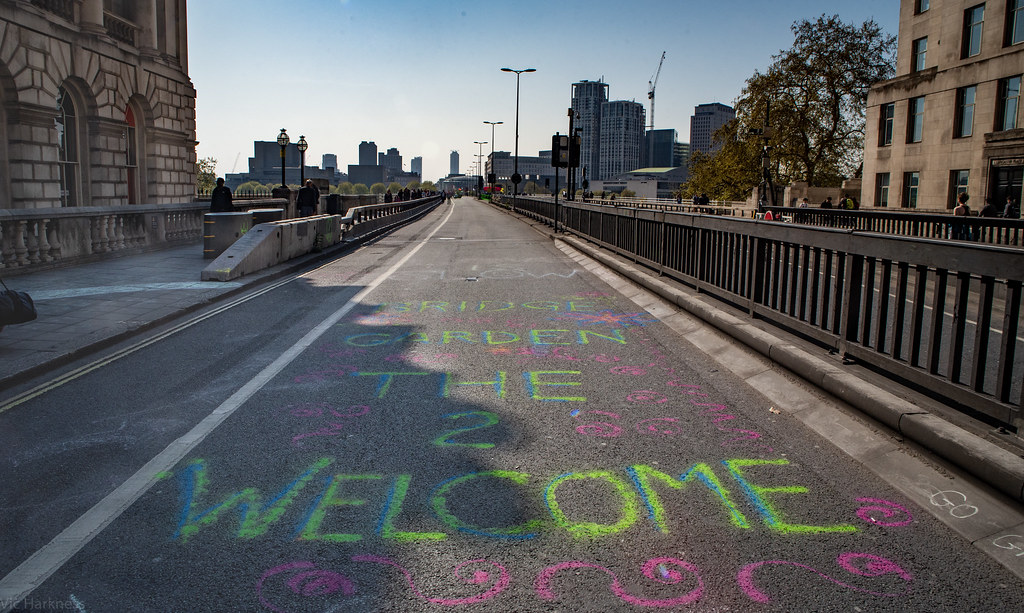 Beyond this, new banners. 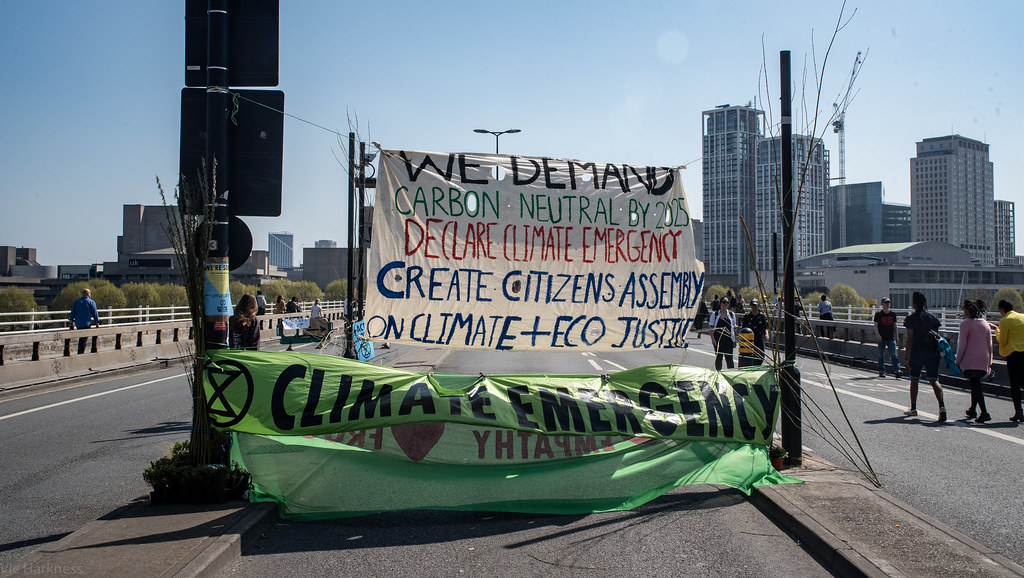 As I approached, a lot of the same sights could be seen. 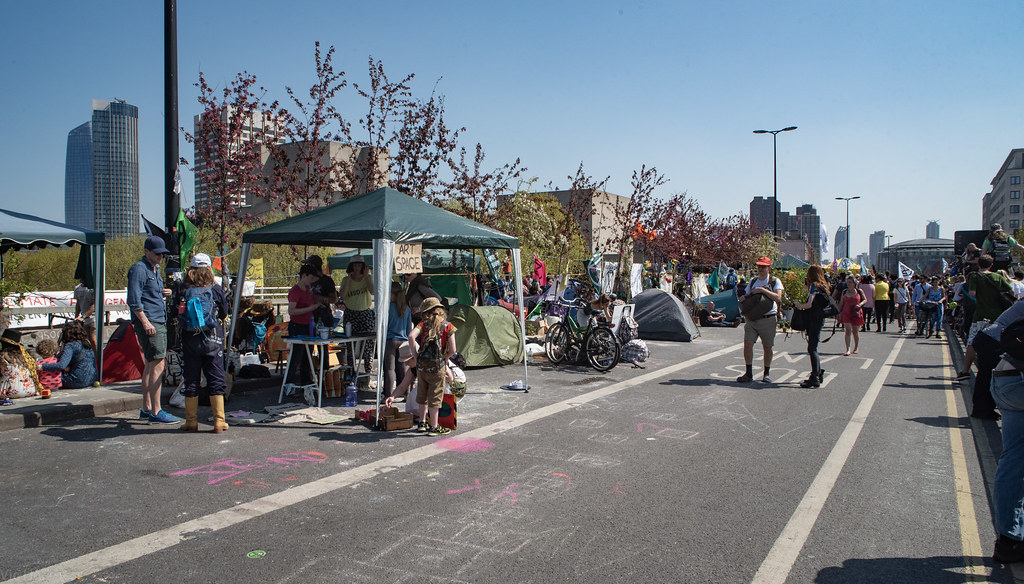 People were enjoying the sunshine, making use of the skateboard ramp. 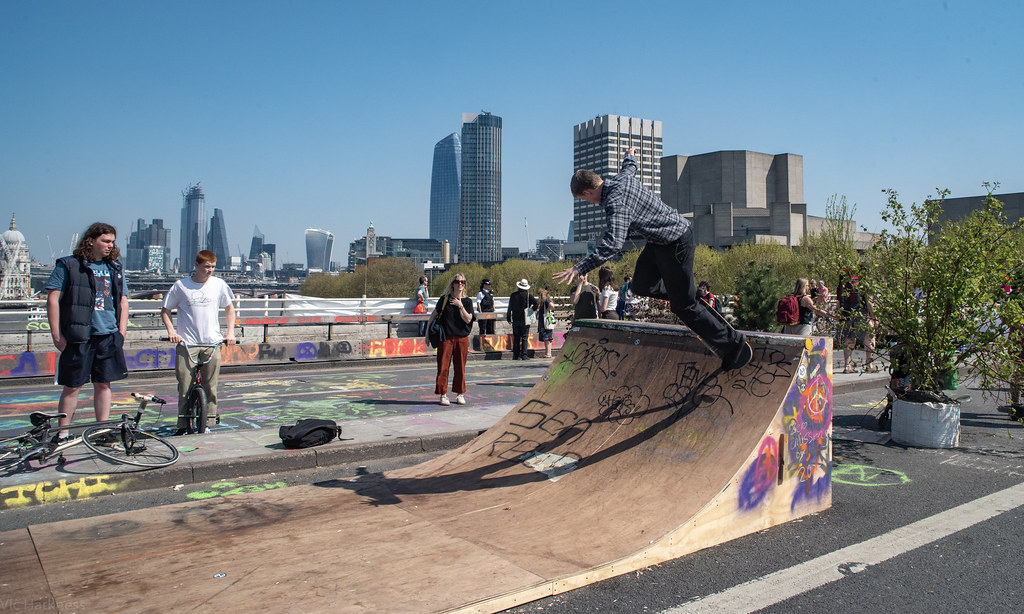 As before, graffiti adorned much of the road. 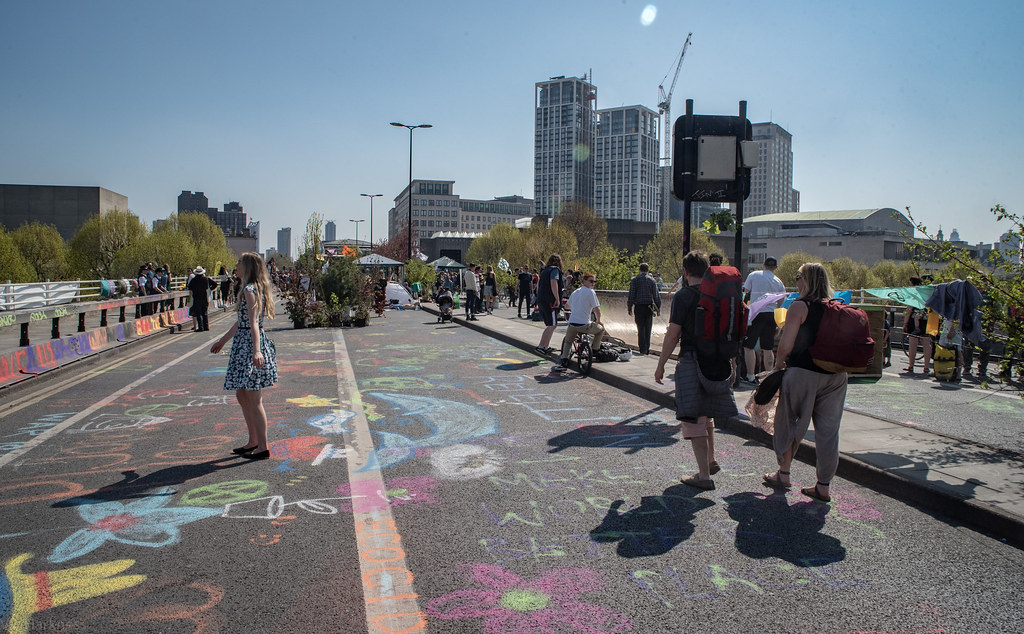 Although some was a little off topic! 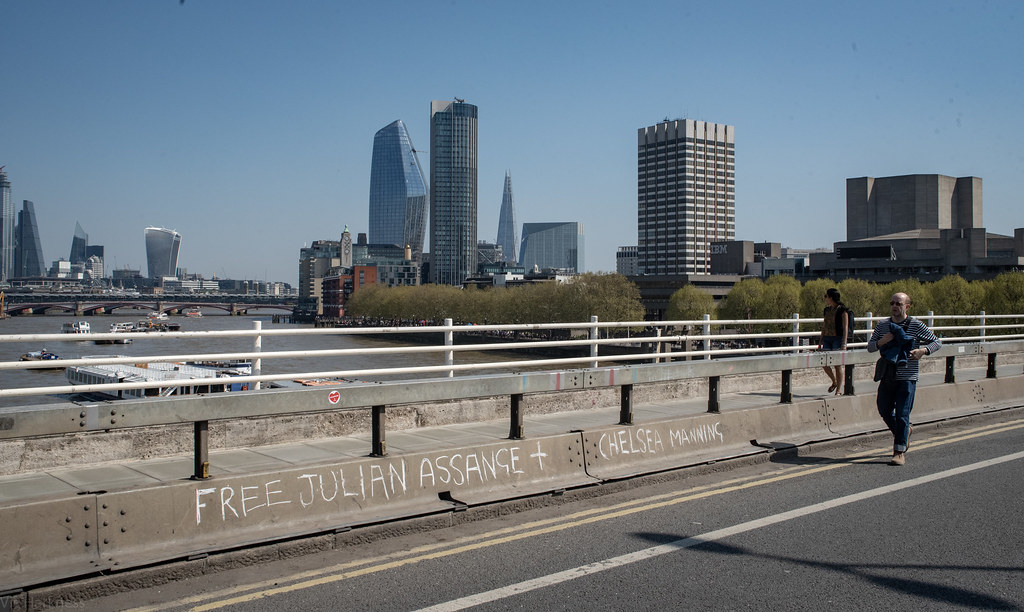 It was interesting looking at some sights with the knowledge gained from the Oxford Circus protests. I began to spot things like phone numbers written on left arms, as protesters had been instructed to do if they intended on being arrested. 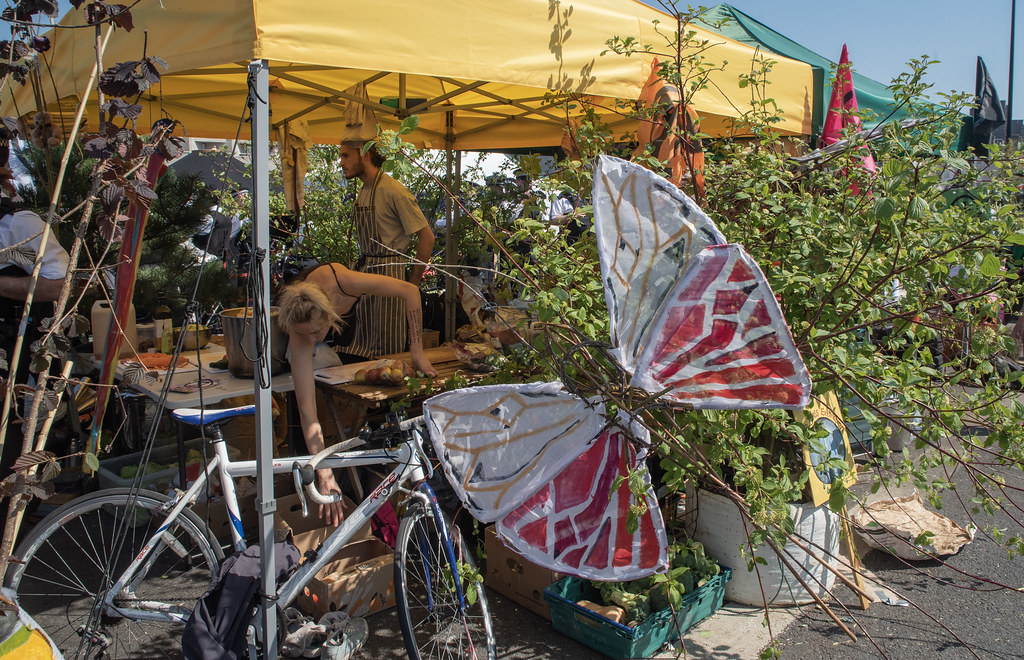 On this visit (in mid afternoon), there was a lot more police presence than I’d previously seen. 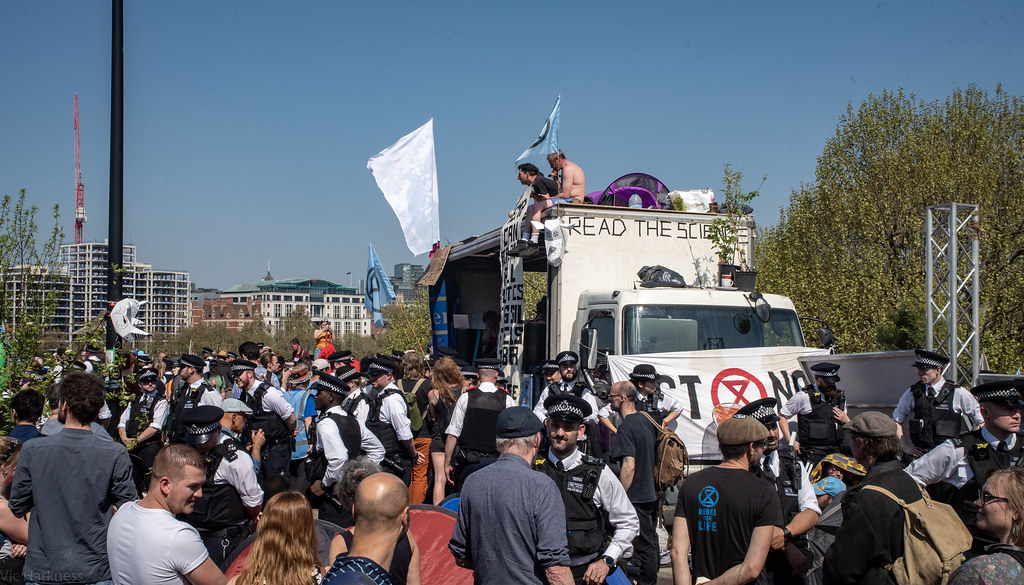 As it turns out the police were setting up a cordon. It was no longer possible to cross the bridge. When I was leaving back out to the south again, I learned that people were no longer even being allowed on to the bridge; I must have been one of the last few to get on it. The cordon was centralised around the truck, suggesting plans to remove it (and the people chained up underneath). 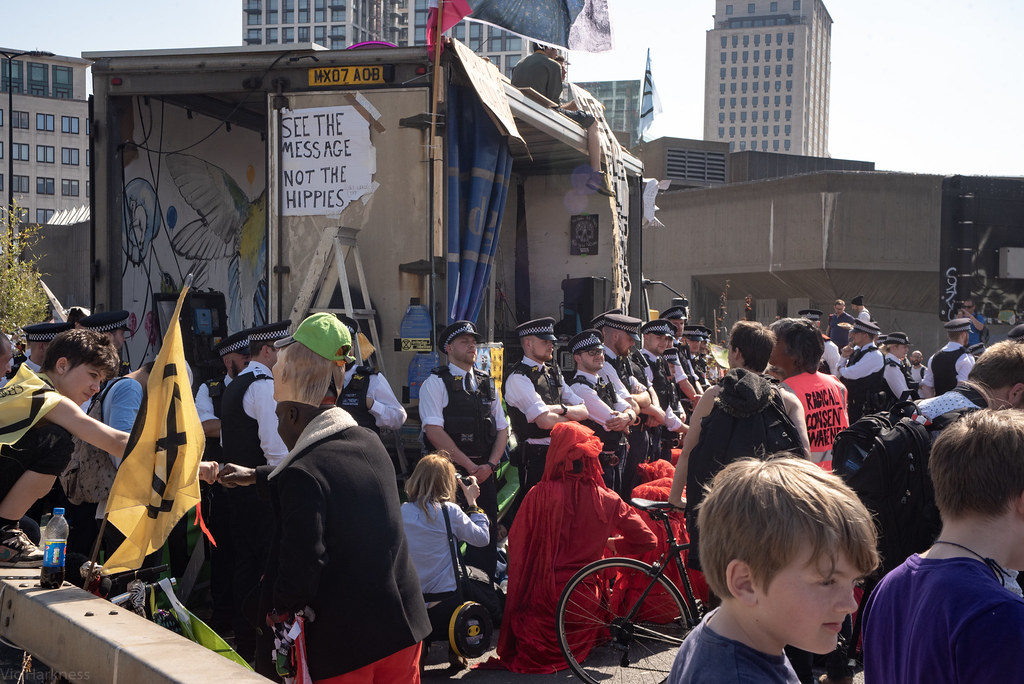 I had some time to kill until my train home, and so I decided to hang around for a bit. People were in good spirits despite the police presence; I was offered falafel multiple times, and given Extinction Rebellion stickers. While I was there, I watched a speech delivered by a young boy. 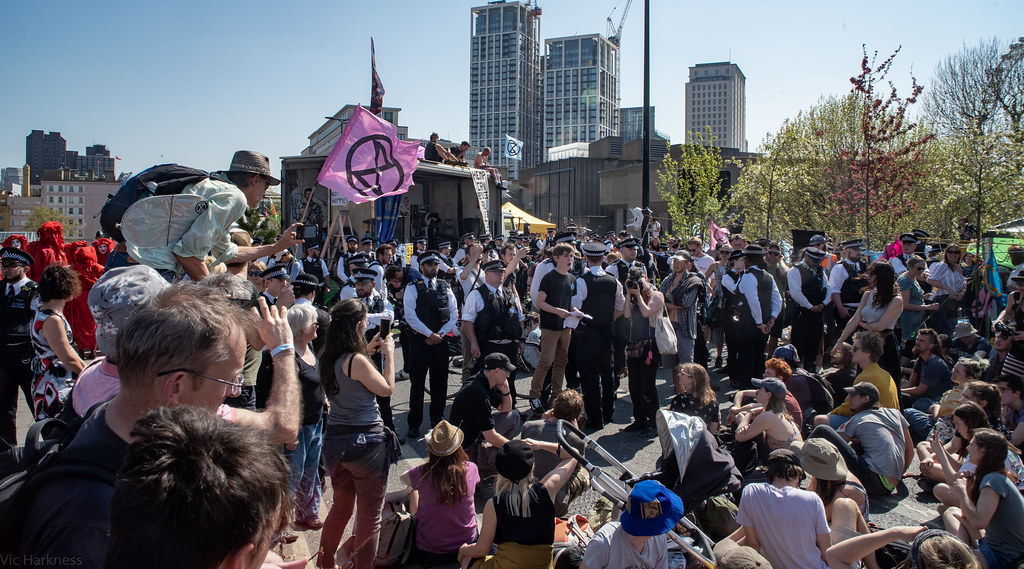 I didn’t catch his name, but I imagine I’ll see him speak again. He spoke incredibly well, and was loud enough to be heard over the crowds. He talked about the need for change, and the governments unwillingness to address the rising problems of global warming. With so much charisma at such a young age, I imagine he’ll go far. The crowds were equally impressed with his speech! 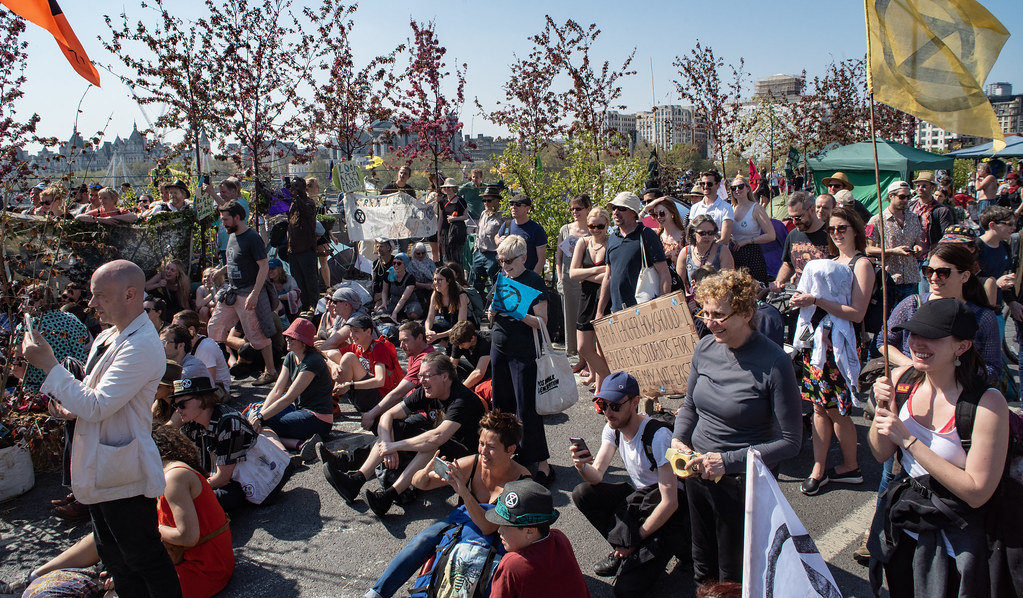 Post-speech, the stalemate resumed for a while. It was windy enough up on the bridge for people to fly kites, and so some did that. 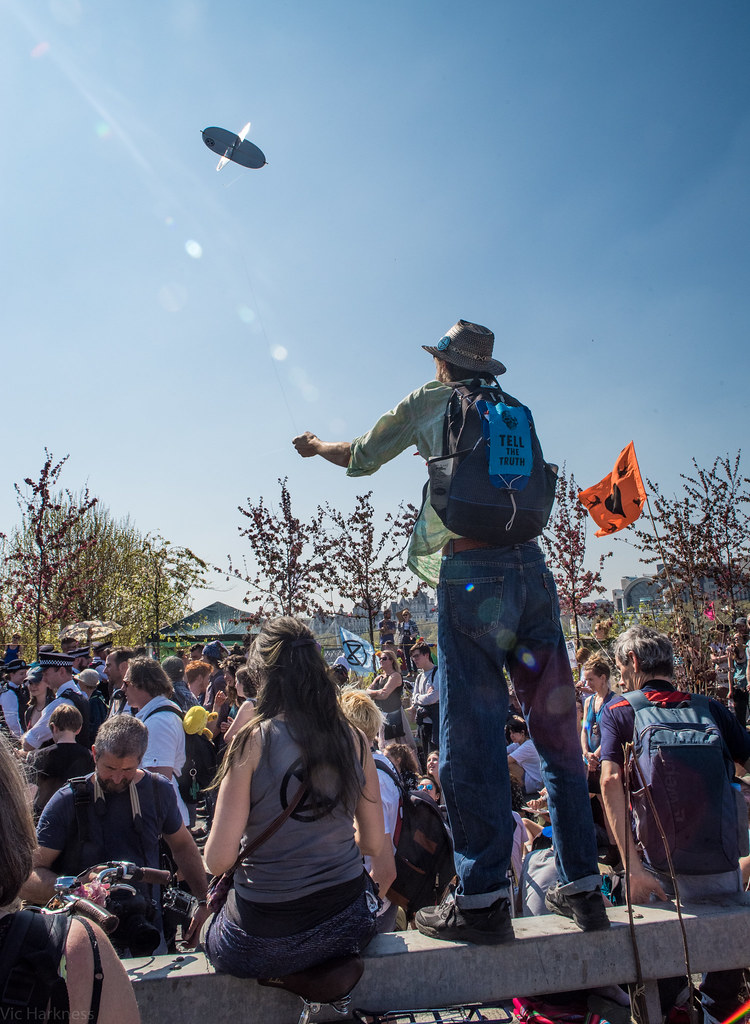 From the vantage point of a barrier, I spotted a group of people dressed all in red.

This group, adored in red cloth, have appeared at other Extinction Rebellion protests sites in London. 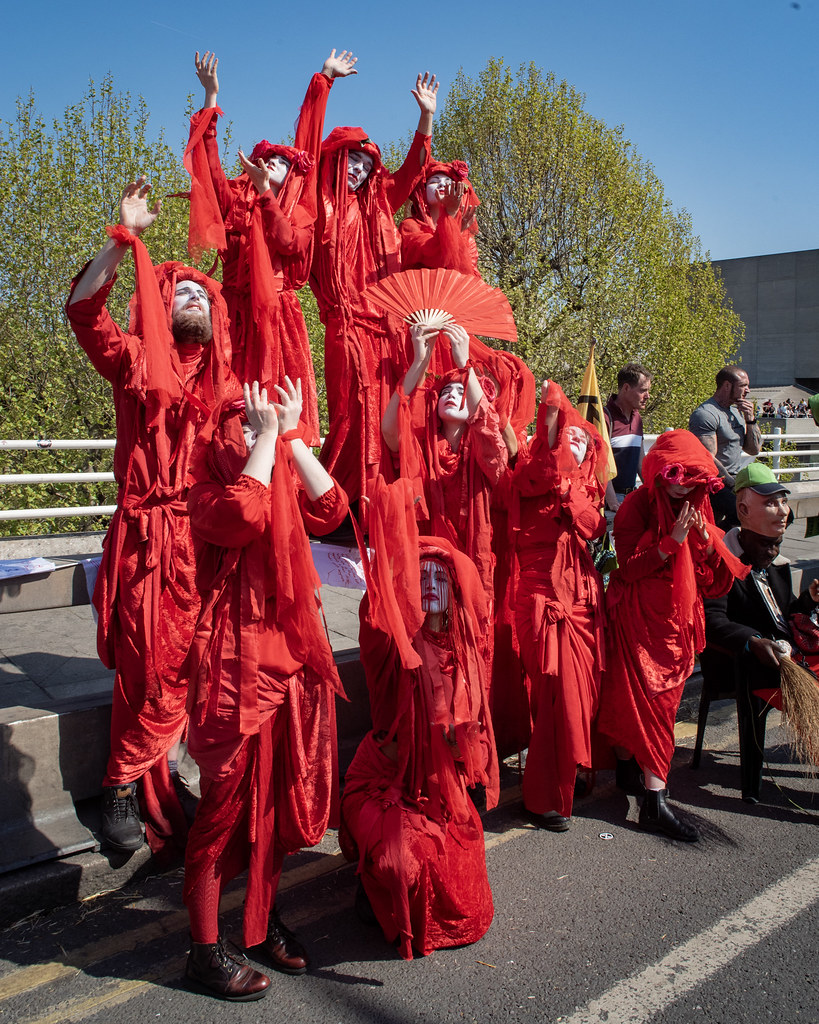 The group moved gently in silence, some wandering among the crowd. 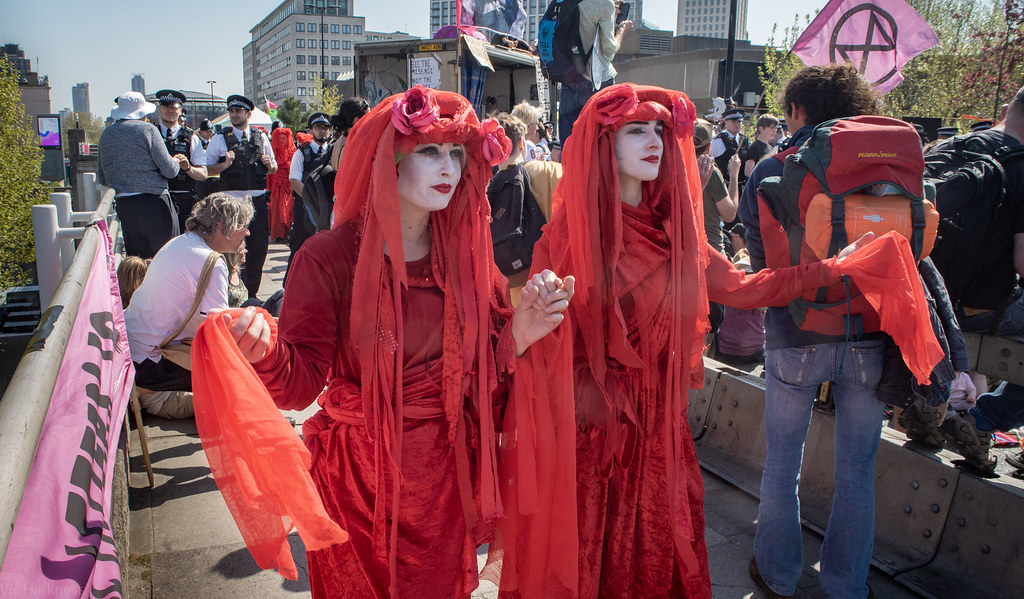 Honestly, I found the porcelain white faces a little creepy. 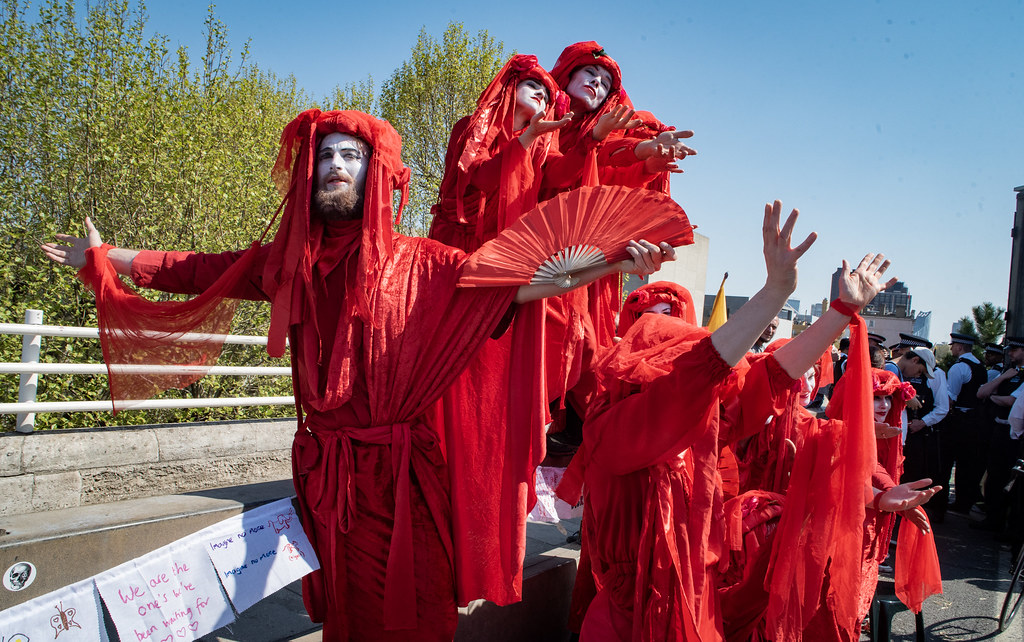 After a while, the bulk of the group went to congregate behind the police line. No-one may enter the cordon created by the wall of bodies. Some of the group were trapped outside, but a sizable number remained within. 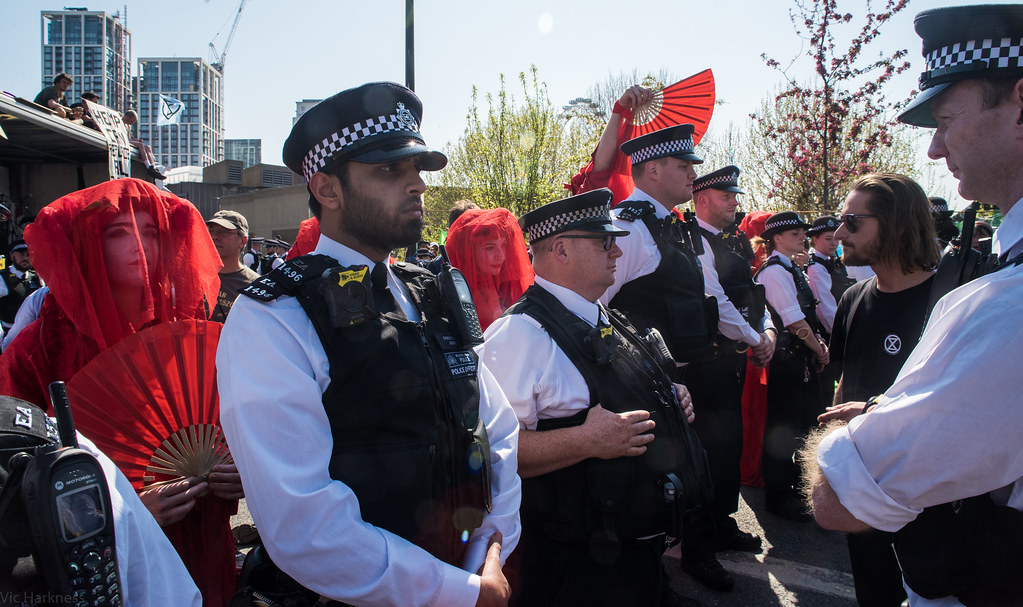 It was a bit of fun to watch the police here. I’m assuming they had been told not to react to this group.  They stood stoically as fans were slowly brandished around their heads. 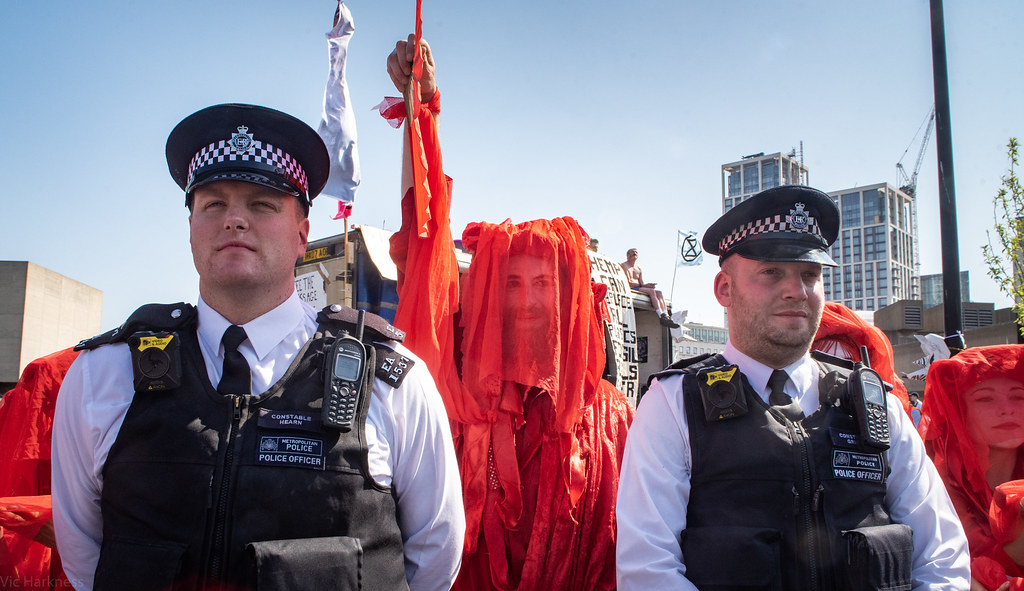 The police stood in their silent line for seemingly ages. Can’t have been pleasant, with the weight of their stab vests and the heat of the sun beating down. 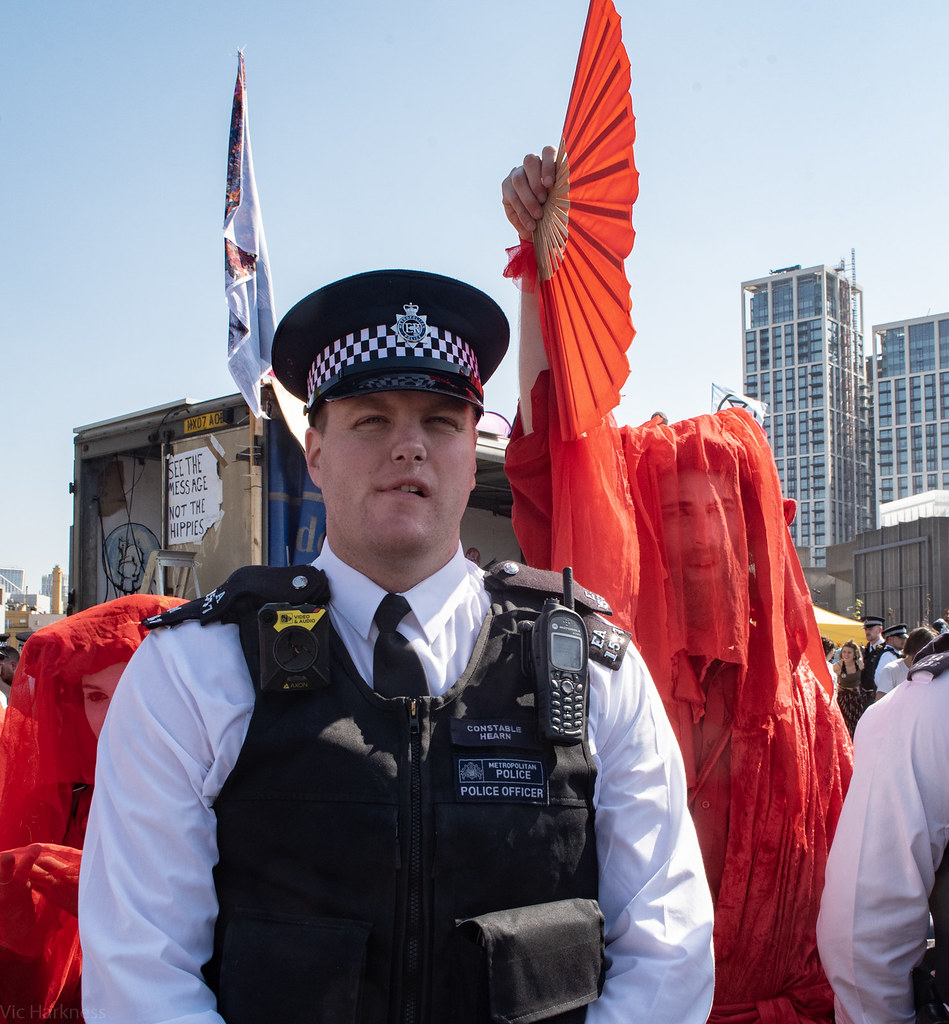 Perhaps the quietness of the group in red was to mirror the silence of the police wall. 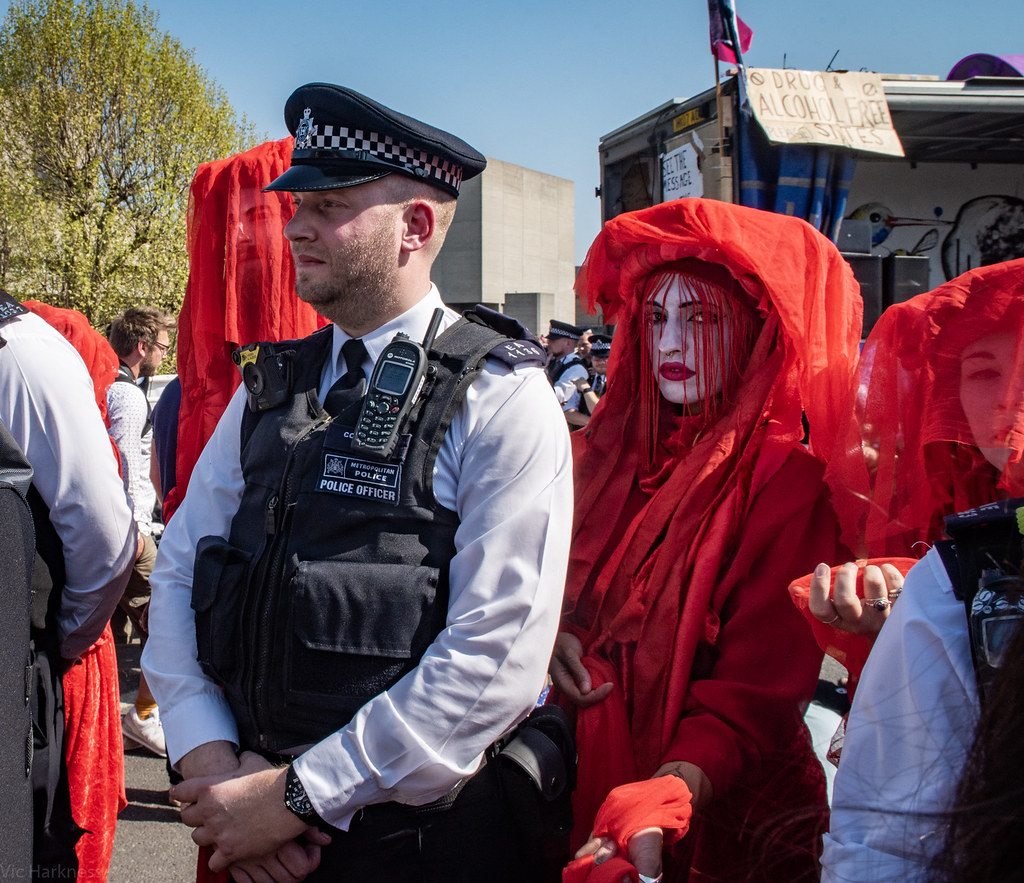 I tried asking some of the police to the side if they knew what the plan was, and they were as tight lipped as expected. They would say that the lorry was to be move, but wouldn’t tell me when. Unfortunately I had to catch a train, and so wasn’t able to stay longer. It seems that in the end it was not moved until the day after.

I suppose that to facilitate this they had set up the strict cordon the day before. I notice that contact was absolutely not allowed across the line. No supplies were being delivered, perhaps in an effort to starve out the protesters. There would also have been the requirement for specialists to remove the people chained under the lorry, which would have taken some time to arrange.

As the government did not seem to make any changes in response to the demands of the Extinction Rebellion group, I would guess that more protests may be on the cards in the future. We shall have to wait and see!