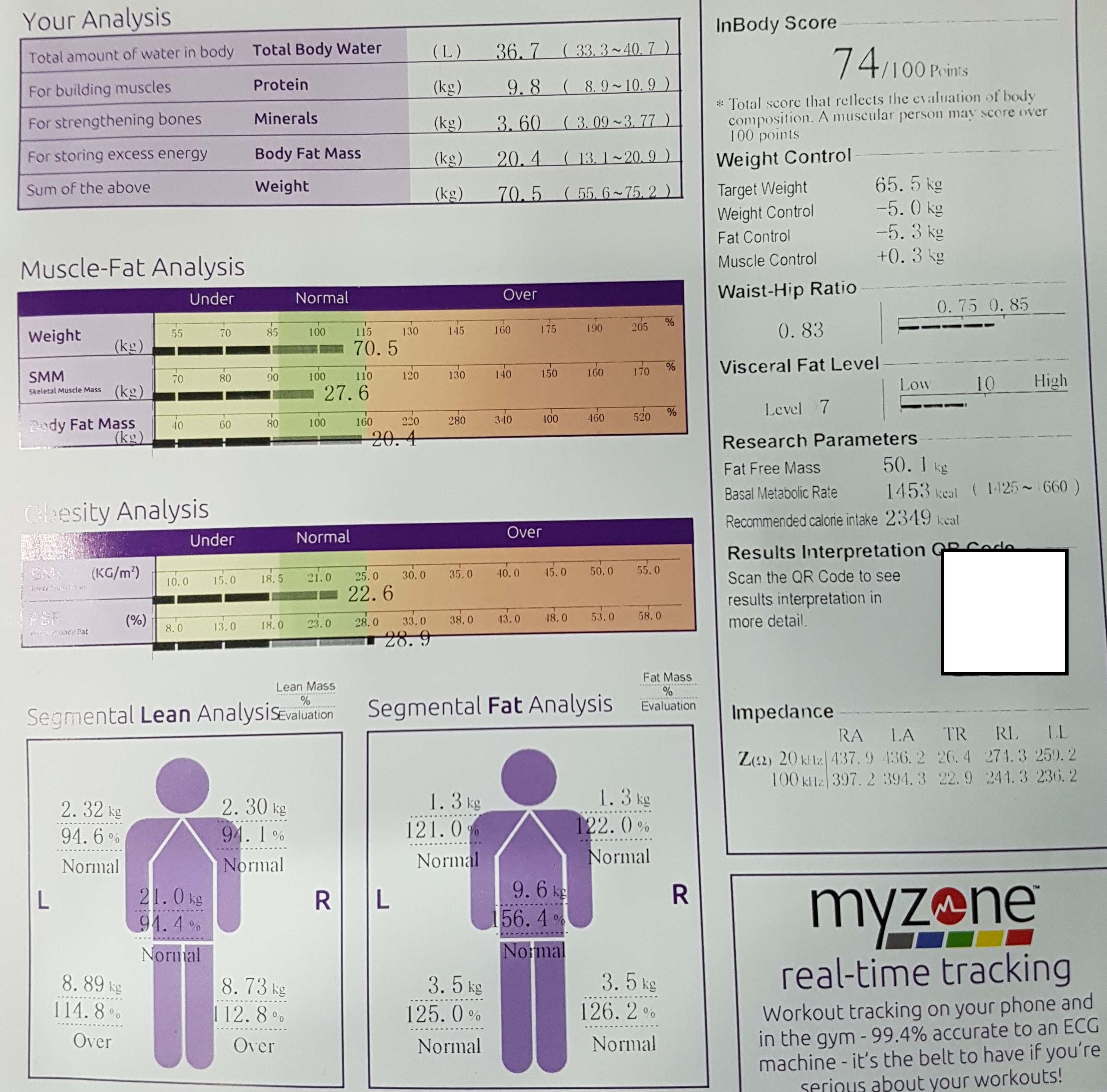 I moved to Basingstoke back in December to start a new job, and that move has brought quite a bit of disruption to my routine. I took the cheapest room I could find, in a flat which as it turns out did not have a usable shower. This was my first motivation to become a frequent gym user; being able to shower.

Come January, my desktop PC died. Various aspects seem to have failed, and the system is already ~6 years old, making it not entirely unexpected. Due to the new job and having just moved, I found myself a bit skint to be able to afford a new PC. This left me with a whole bunch of free time.

Since moving to my new (nicer) room, I kept up with going to the gym to fill the time. I go 3 or 4 times a week, and my sessions are forever getting longer and longer as I add more stuff to them. It’s a sign I need to re-evaluate my workout plans, which I plan to do in the next couple of weeks. My new house-share also features a working oven/hob, which is another thing that was broken in my previous place.

Still, having been going to the gym regularly for 2.5 months. I’ve also been eating a lot healthier. I still eat way too much, and will binge on eating out quite a bit. The quality of food is much better however. Instead of my prior bowl of pasta with cheese or instant noodles, I’m largely eating meat and veg. I find myself eating bread once every couple of weeks, and rice or noodles maybe once a week.

I’ve been feeling a lot healthier in myself for making this change. I’d always assumed that I had Seasonal Affective Disorder (SAD), because there’s always been a very noticeable difference in my moods in Summer vs. Winter. As it turns out, I think it was more diet/exercise than sunlight. In the summer I tend to always be out and about travelling, meaning I’m walking everywhere and eating quite a varied diet. In the winter I vegetate in front of World of Warcraft with pasta.

So, 2.5 months in to my new healthier lifestyle. When I began I had a body composition scan done at my gym, in the hopes that it would give me a kick up the ass. It was quite depressing.

I was what’s known as skinnyfat. I didn’t look overweight, but I had little muscle. I also tended to carry the fat well because I’m so obnoxiously tall, and fat tends not to accumulate on my stomach (thanks genetics!)

In the above image you can see that although by BMI puts me in the healthy range, I was quite far over in PBF (percentage body fat), my body being 34.2% fat. My general metrics were:
-69.4kg total weight
-24.9kg skeletal muscle mass
-23.8kg body fat mass

I had my new scan done yesterday, and I’m very happy with my progress! 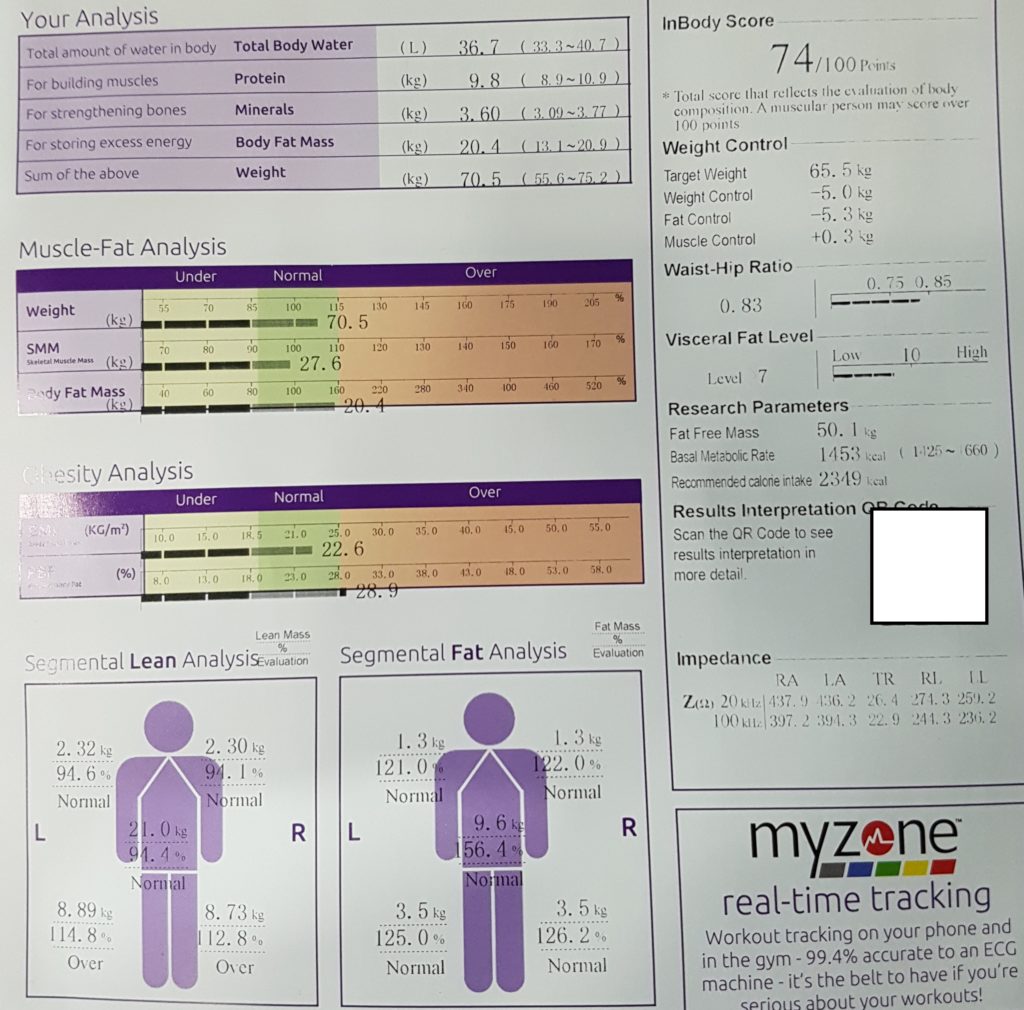 From my prior metrics, I’ve made excellent progress for the time span! I’m now at 28.9% body fat, a change of 5.3%. I still have an unhealthy amount of body fat for my height, but only slightly! Although I can’t expect to continue to progress at such a high rate as I have done, I’m confident that I can get within the healthy range within the next two months.

According to the scan I’m also retaining a lot more water than I was before (unsure if this is good), as well as a lot more protein and mineral mass (I assume this is good).

To give a general overview of the scan, an InBody score is provided in the top right. This value starts at 80, and you lose points for excess fat, not enough muscle, etc. An averagely healthy person should score in the region of 70-80. Below 70 and you’re probably obese, above 80 and you’re probably actively involved in fitness activities. For my first scan I scored 69, and now I’ve climbed to 74. Although the value is arbitrary, I’m hope that I can make it over 80 some time in the future!

In case you couldn’t tell, I’m pretty smug about my progress. Still, I would like to get my overall body weight down (via loss of fat). Although my ankle is OK with it, my bad knee seems quite sensitive to weight. If I could shift ~5kg of overall body weight then that would probably be a big help for it, regardless of my overall health.

Here’s to another good scan in two months!