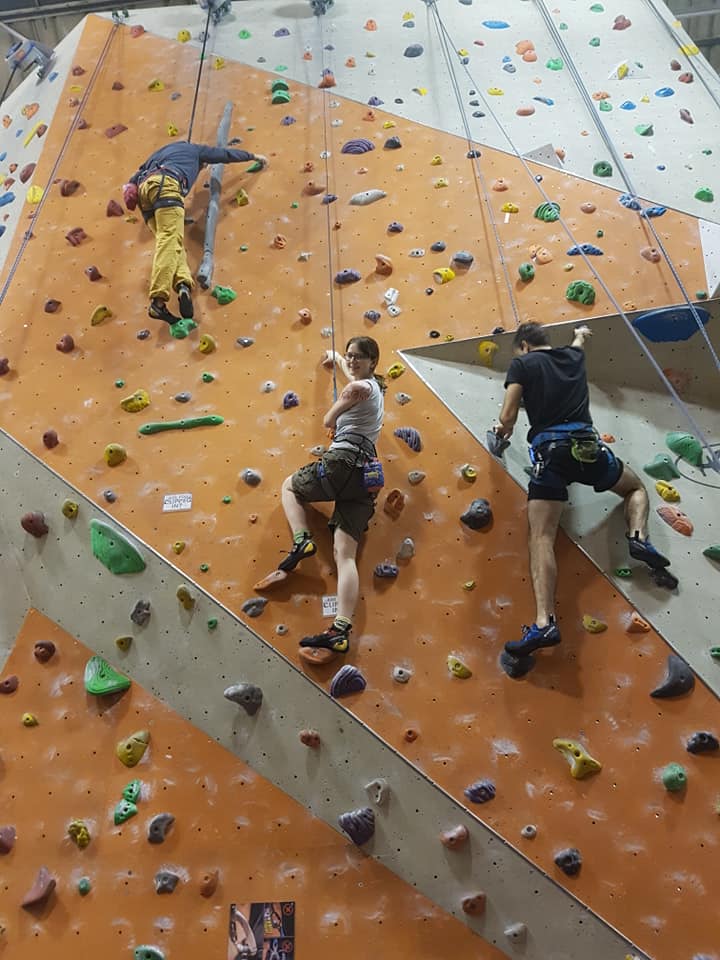 Going climbing again after my accident

As soon as I was out of hospital, I went along with friends climbing. I didn’t climb, but I took photos for them. I posed by the wall for photos to wind people up with. After the complications I experienced and the extra surgeries were done, I had some issues with climbing.

Once I was back walking without the moon boot, I went climbing again. I still had the small ankle brace on at this point, and found that I had to go up a size in climbing shoes. The tightness of the toes which is necessary for good grip caused too much pain for my nerve damage appendage. I had also lost a large amount of muscle tone, making climbing depressingly difficult.

At this point I did try and do a little climbing, if nothing so that I remained involved with my climbing friends. It was quite difficult for me, as I appeared to have developed a fear of heights. Even climbing with the auto-belay system, being off the ground was quite terrifying. Seeing people drop from the walls made me incredibly anxious. I stopped trying for a bit.

I tried to go again, I really did. Over time the physical limitations became less of an issue, and the psychological ones took over. I had a small attempt at bouldering (climbing without ropes, as I was doing when I had my accident). I would climb to a height of roughly one foot off of the ground, then look down. The best way to describe it would be to say that my brain went wobbly. It did not enjoy this thank you very much, and if we could be back on the ground then that would be just splendid.

I would look at the ground, one foot away, and let go. A drop of one foot did not cause so much as a twinge of pain in my joints. I would climb up one foot again, look down, and my brain would go wobbly. Repeating this, ad nauseum, did not seem to abate my brains fears. Those who know me know that I do not like to live with fears, and so this caused me a deal of distress.

I’ve spent some time trying to process the fear of heights. Glass platform in a tower? I’m on it. Let me lean off this balcony, or clamber across this rickety bridge. Over time, the general fear of heights had eased off again.

I was chatting to someone from work who was interested in getting back in to climbing, and I found myself offering to go with him. This would be at a wall with auto-belays, so I wouldn’t even have to do bouldering again. It would, however, require me to get quite high up.

Arriving at the climbing complex, I headed for the changing rooms on the second floor. This took me along a walkway overlooking the bouldering area. Looking at those walls made my brain feel a bit wobbly. They were of roughly the same height as the wall I’d fallen from. I stared at them for a little bit, trying to reconcile their existence. I don’t intend to ever return to bouldering upwards, but it would be nice to do some traversal routes in the future.

All geared up, I was ready to climb. I apparently still need climbing shoes one size up due to the nerve damage; it would probably be helpful for me to buy myself a pair to wear around the house, helping my toes get used to the sensations.

Climbing with the auto belay was OK. My technique was rubbish, but thankfully my recent gym habit meant that I could brute force the routes, making up the hurdles through sheer upper body strength. One I reached the top, I looked down. My brain went wobbly. At this point, I felt like I had a choice to make- sink or swim. I let go of the wall.

Abseiling down was not as stressful as I thought it might be, because I felt elated. I had climbed the wall, I had overcome the fear of the height and let go, leaving myself at the mercy of the auto-belay system.

I did a few more climbs. I moved to a more difficult one, in which I found myself at another decision point near the top. I didn’t have the technique to gracefully climb to the hold I was targeting, I would have to jump and grab for it. I won’t be overly dramatic and say that I was transported back to the split second before my injury, because I wasn’t. My brain was wobbly with the thought of having to willingly jump for the hold, but it was only afterwards that the parallel was drawn.

I feel like I made some good personal progress by climbing yesterday. I proved to myself that I can still use mind over matter to push through my fears, even if I couldn’t quite describe the fear that I was experiencing.

I’m hoping in the future to go climbing more, perhaps once every two weeks or so. I don’t think it’s the sport for me any more, and frankly I’m quite happy with my gym routine. I’m happy to have done it, to have addressed this fear of heights before it could become a problem for me in the future.
My advise to anyone with fears? Don’t let them get the better of you. They can be conquered.