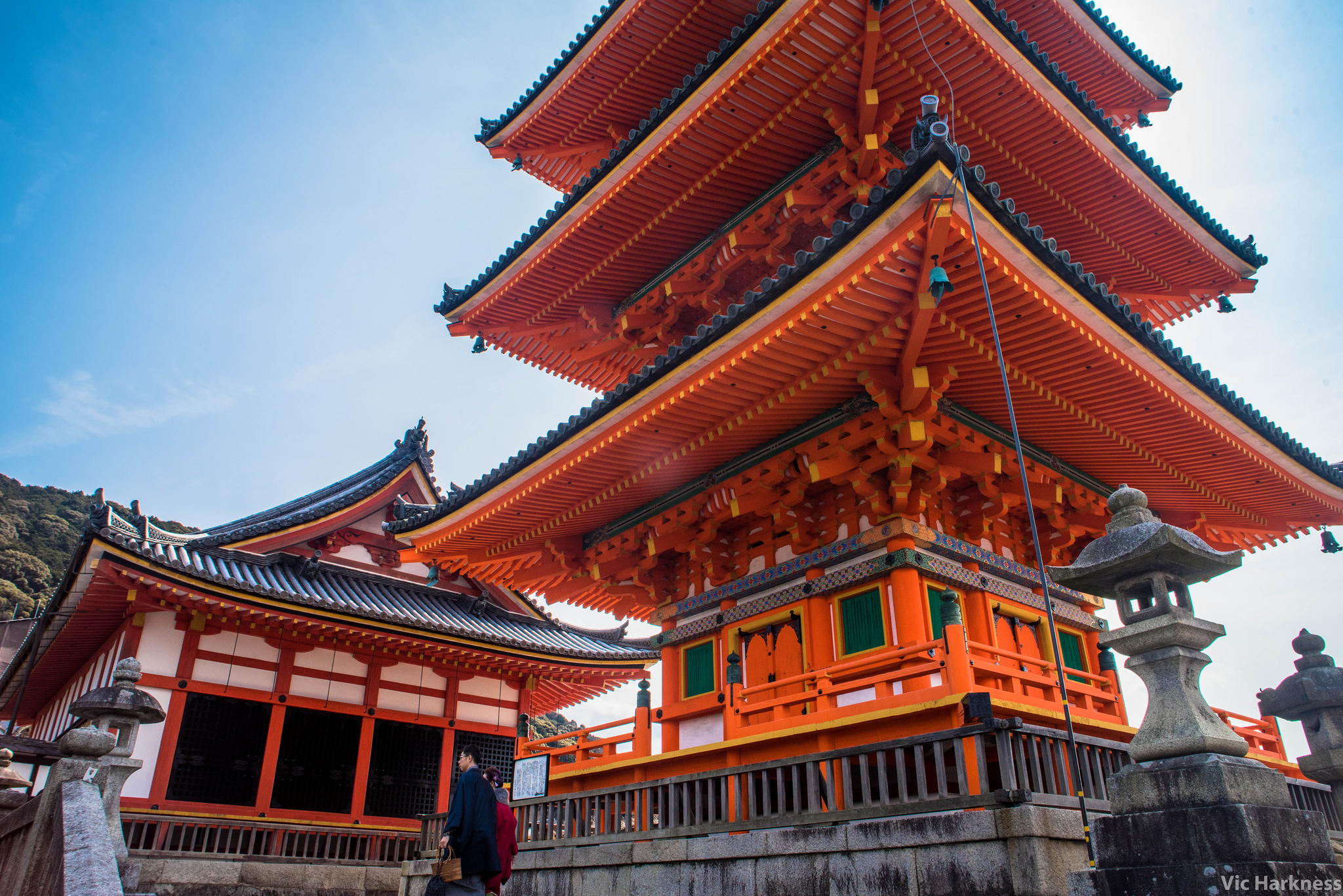 Day 7, we awaken at the lovely little Uji Cha-gan-ju Tei House, a hostel in Uji. Today we may not have covered many miles, but we certainly saw a hell of a lot! Here’s the route: 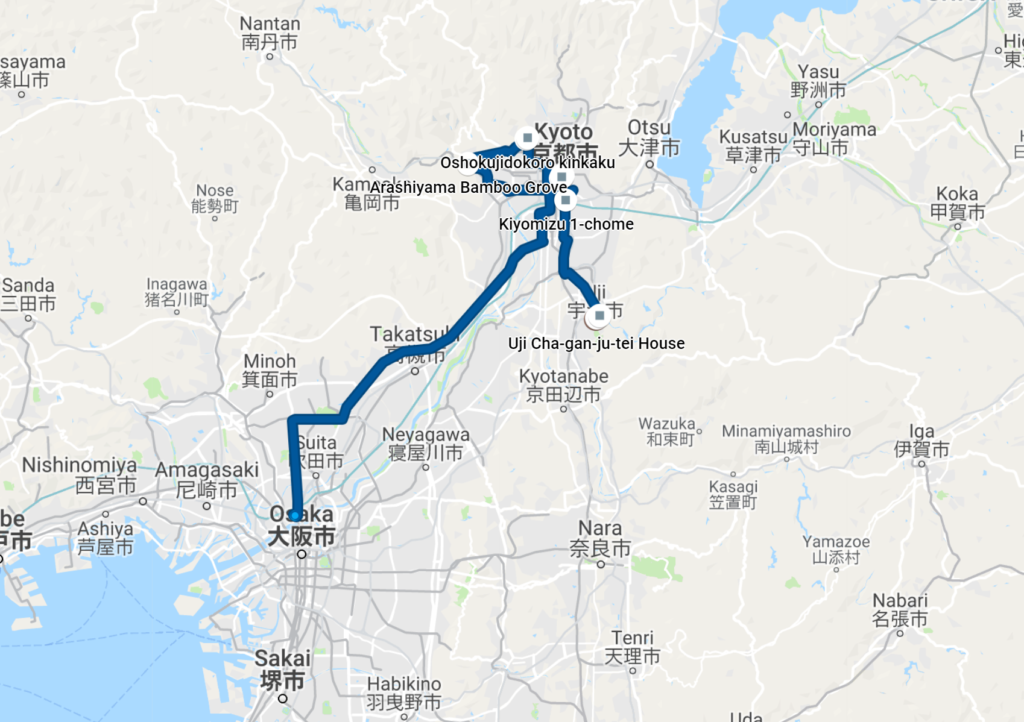 We stopped by the Uji Chaganju Café (one of the many matcha green tea themed cafes of the area) for breakfast, and further souvenir purchasing (read: matcha for EVERYONE).

Here we tried to get tea, which unless you’re ordering from an English-oriented shop you never really know what you’re going to get. We had standard green tea, and another tea which was much darker and tasted vaguely of seaweed. Their English wasn’t good enough to explain what it was, and so at a later point I ended up buying a few different teas from a convenience store to take back with me and try out. From this I have learned that it was roasted green tea. The flavour is completely different to your standard matcha, and I actually much prefer it. Unfortunately I only have one box of it, so I have to somewhat ration! 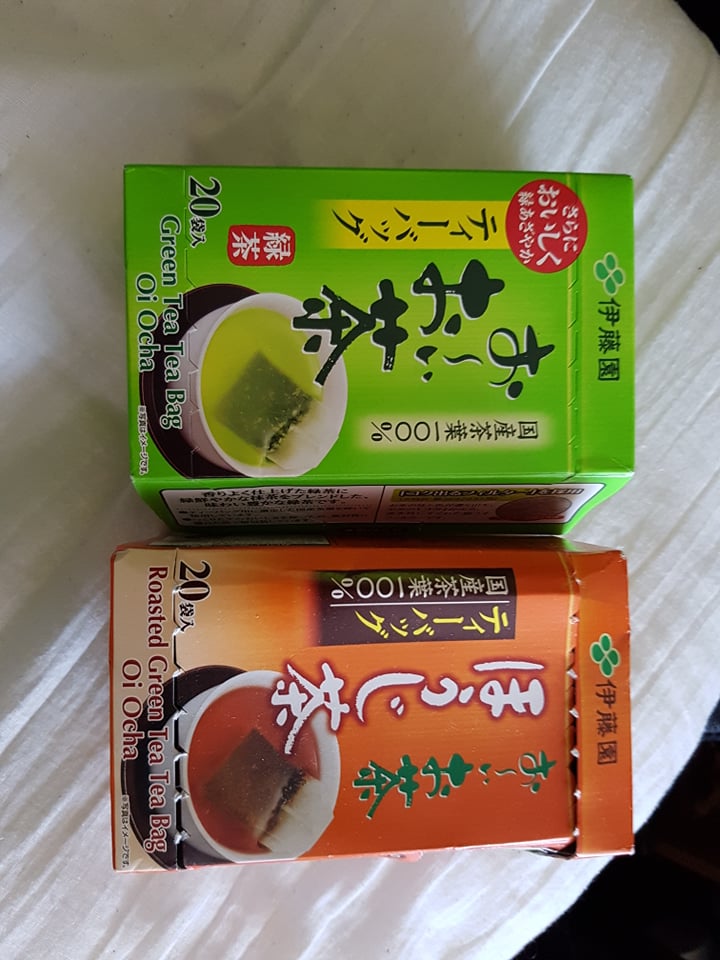 Sufficiently fortified, we departed Uji for Kyoto. Kyoto, for the uninitiated, is chock-full of temples. As this was a fleeting visit, we decided which locations we most wanted to visit, and just went to those. There’s so much more to see in Kyoto and so, again, this would be a destination that I would spend more time in if I returned to Japan.

One of the first things we discovered about Kyoto was that parking is a bit of a nightmare. Quite a lot of streets are pedestrianised, so finding routes was a faff. Eventually we parked up, and made our way towards the first temple we planned to see. 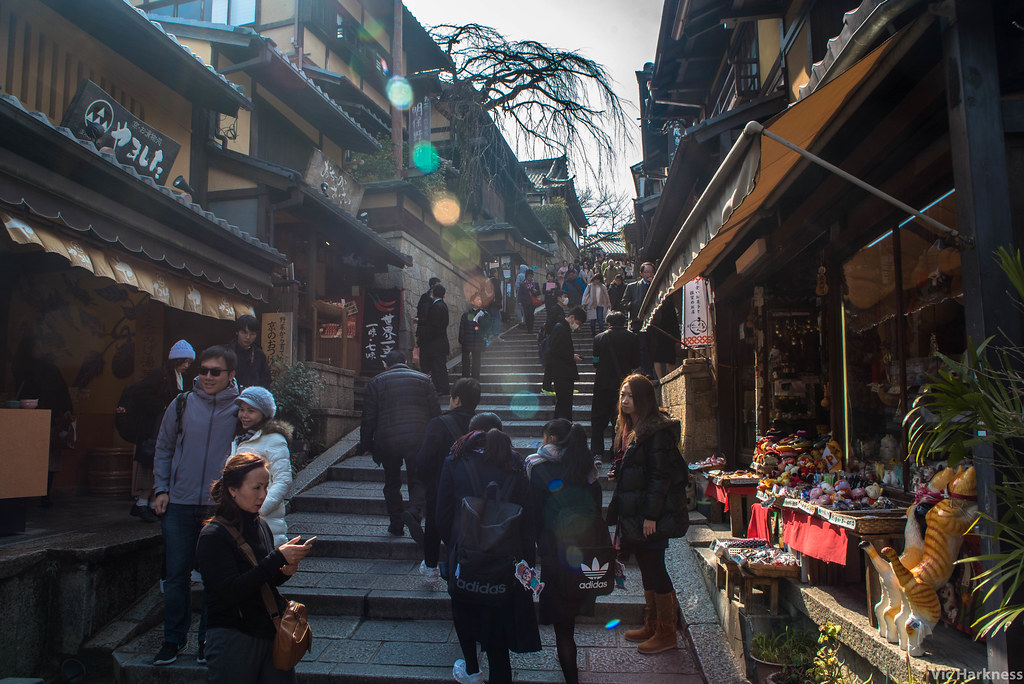 The streets were very busy, with a lot of stores selling souvenirs and street food (we were in a very touristy area). 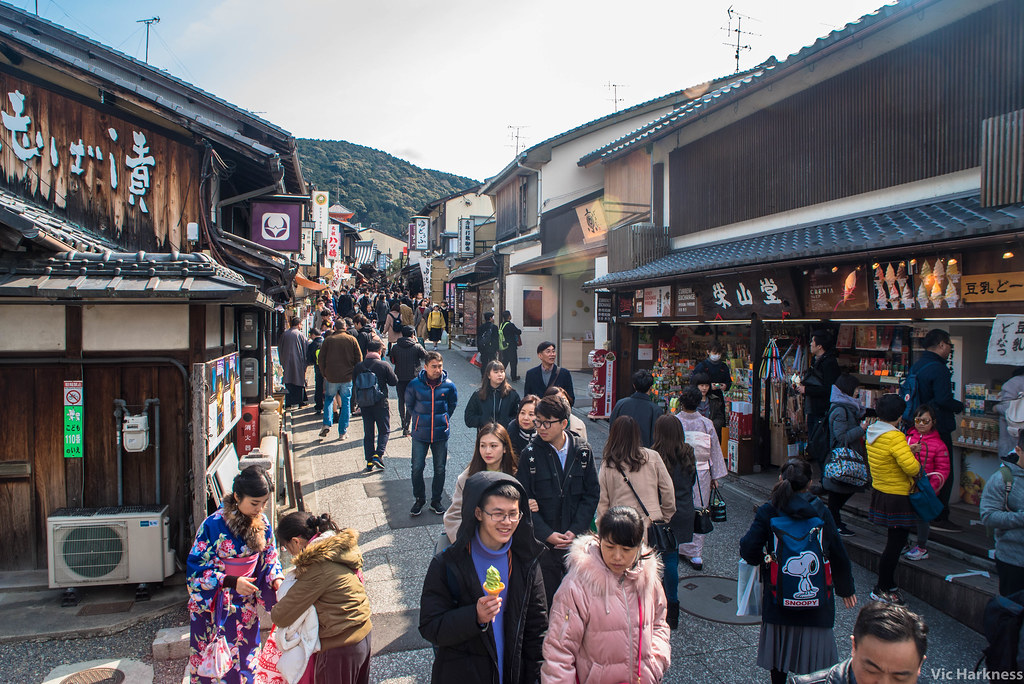 I quite enjoyed walking around streets in Japan, even if very touristy. The architecture and styling is so different to what I’m used to from the rest of my travels. I find the lack of language comprehension makes me take in the overall look and feel of the locations more- my brain isn’t trying to process all of the textual information being presented to me, just processing the aesthetics of the location.

As you may notice in some of the above pictures, a lot of people are wearing traditional outfits. This is phenomena local to Kyoto. Kyoto famously features the area called Gion, informally known as the geisha district. We did not visit this area, which interesting is becoming more hostile towards tourists due to bad behaviours. Actual working geishas inhabit this area, but some tourists see them as attractions, and so will harass them, leading to tourists being disliked in this area.

Because of the association of geishas with Kyoto, there are numerous shops that will help you select and rent traditional garb for the day. We considered doing this, but decided against it. I’m up and down off the floor a lot with my camera, plus frankly we were both probably too big to be able to get clothing. At 5ft10 I was taller than the vast majority of people in Japan, making my travelling friend who stands at over 6 foot tall a veritable giant. For reference, I asked some girls who were dressed up to take a photo with them (the handful of phrases I learned in Japan included “can I take photographs”). 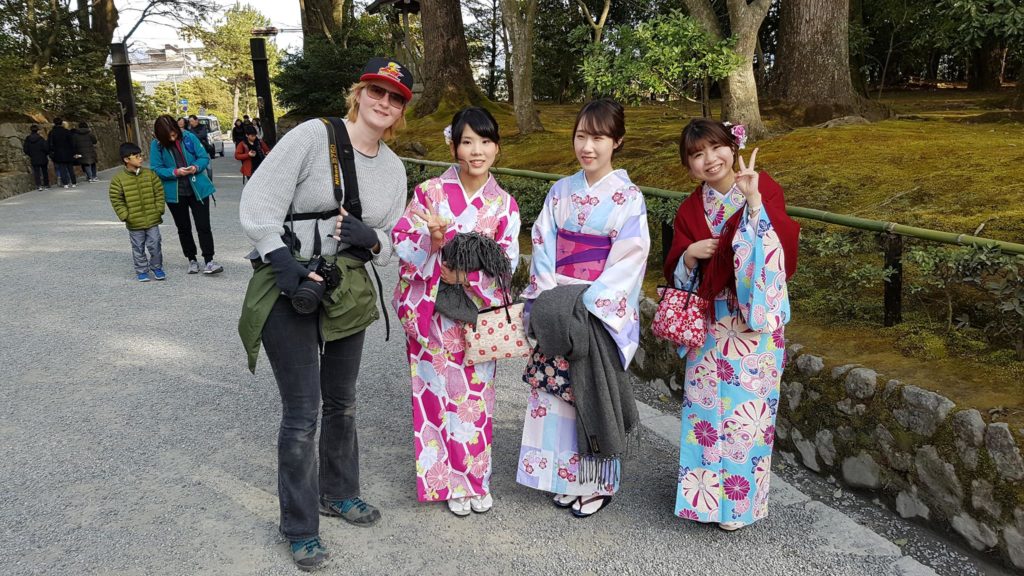 I’m a fair bit larger than them!

But, back to the temples. En route we got various bits of street food. My personal favourite was the pickled cucumber on a stick (which I’ve recently learned is called kyuri). 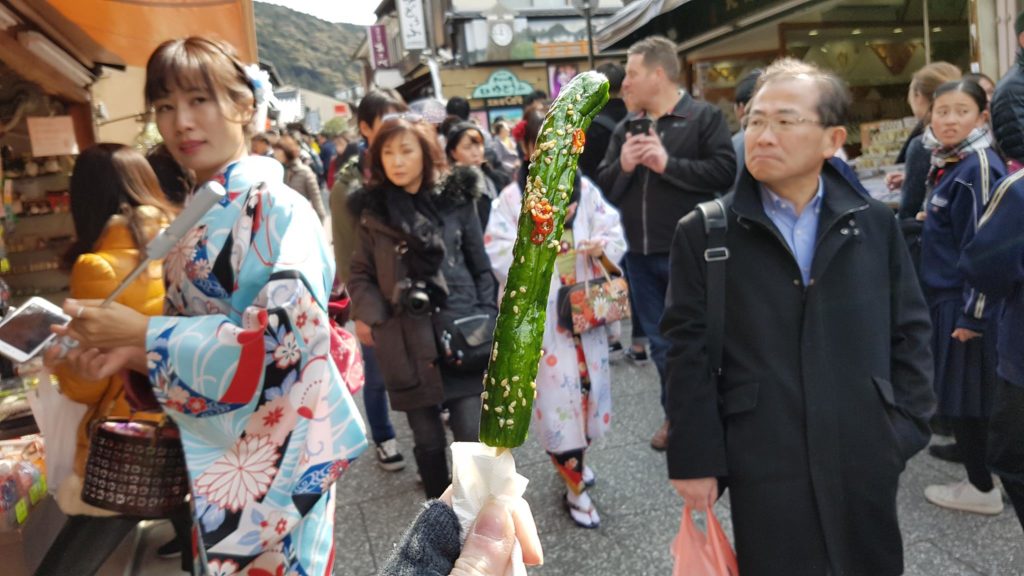 Pickled in rice-wine vinegar with sesame and chilli, it was actually super tasty. It’s something I’ve been meaning to try making at home!

After a bit more walking, we made it to the Kiyomizu-dera Buddhist temple! 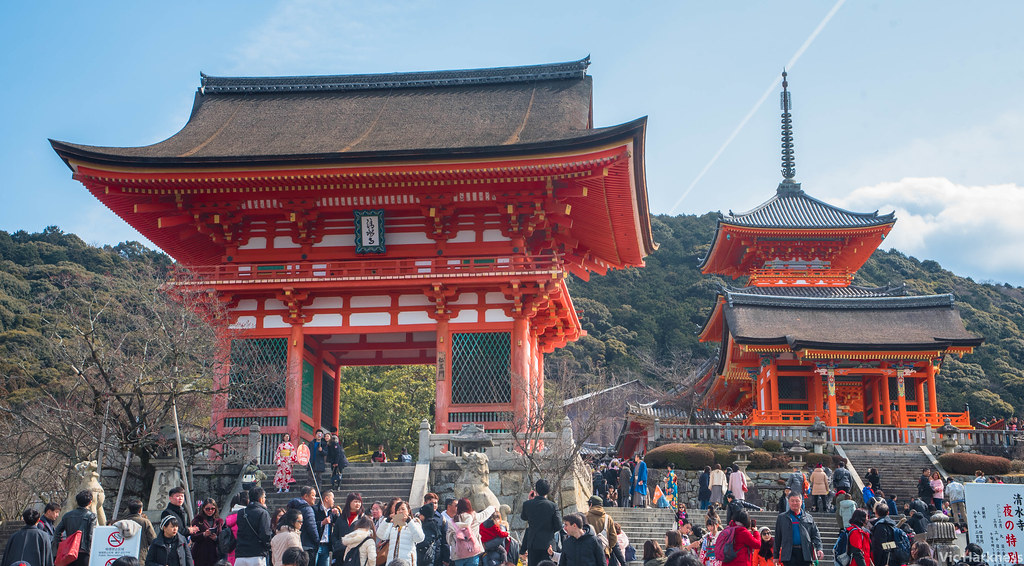 This temple, a UNESCO World Heritage site, was founded in 778 with the above structures built in 1633.

As with many temple sites in Japan, it consists of numerous structures over a large area. The most striking is perhaps the niōmon (gate with guardian statues) and pagoda out front. 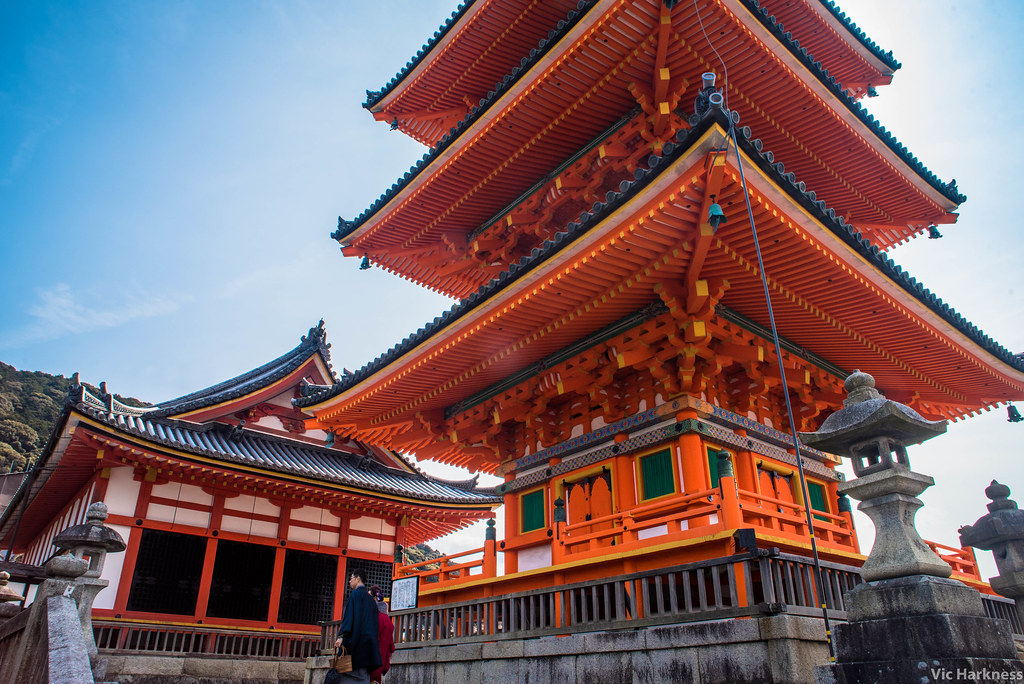 The temple site sits on the hillside overlooking Kyoto. 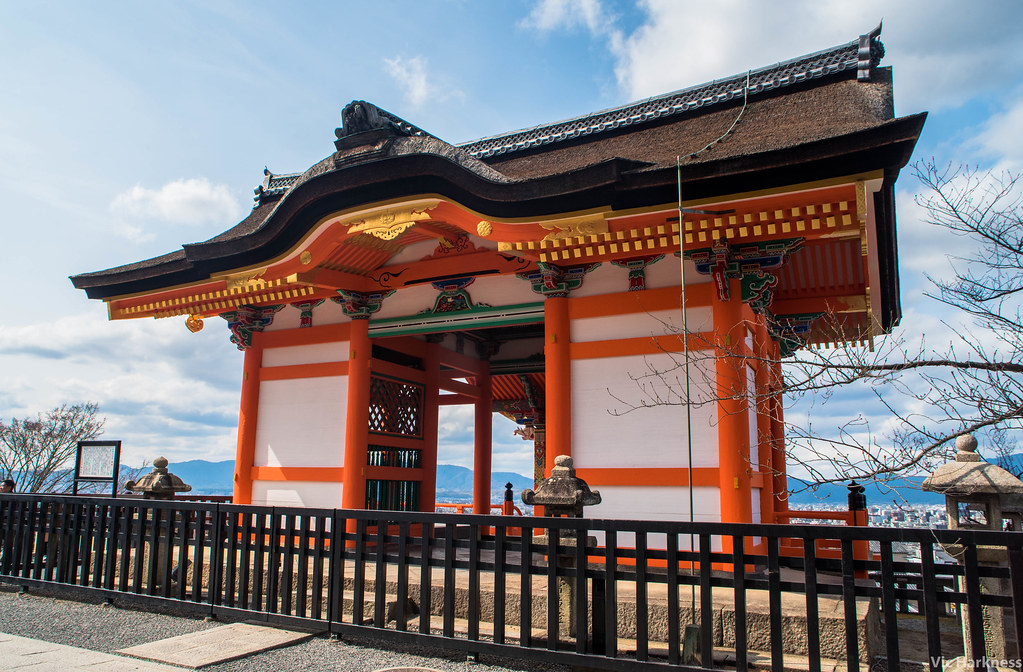 Although nowhere near as striking as the views from the Skytree in Tokyo, they were still excellent!

Annoyingly, I don’t seem to have photos of the main building to hand- They didn’t end up on my Flickr account because it was largely covered in scaffolding at the time. As I’ve said previously, I don’t have access to my photo archives currently. It was a large wooden building, with limited photography allowed inside (as well as no shoes). I don’t mean to be disrespectful by calling the internals a generic Buddhist temple in Japan, but I would say that the outside of the temples was a lot more dramatic than the insides.

The large wooden main building is built on to the side of the mountains using wooden struts. The outside balcony was shut off due to the extensive repair works taking place (again, joys of the off season). Interestingly, this location is associated with a Japanese phrase which translates as “to jump off the stage at Kiyomizu”, an equivalent to the English phrase “to take the plunge”. It is said that anyone that can survive the 13 meter plunge from here will be granted a wish. During the Edo period where this was popularised, 234 jumps were recorded with a reported survival rate of 85.4% (which is a lot higher than I would have guessed). For obvious reasons, doing this is now prohibited.

As I said, the site is huge. It features various points of interest, such as the Otowa waterfall. 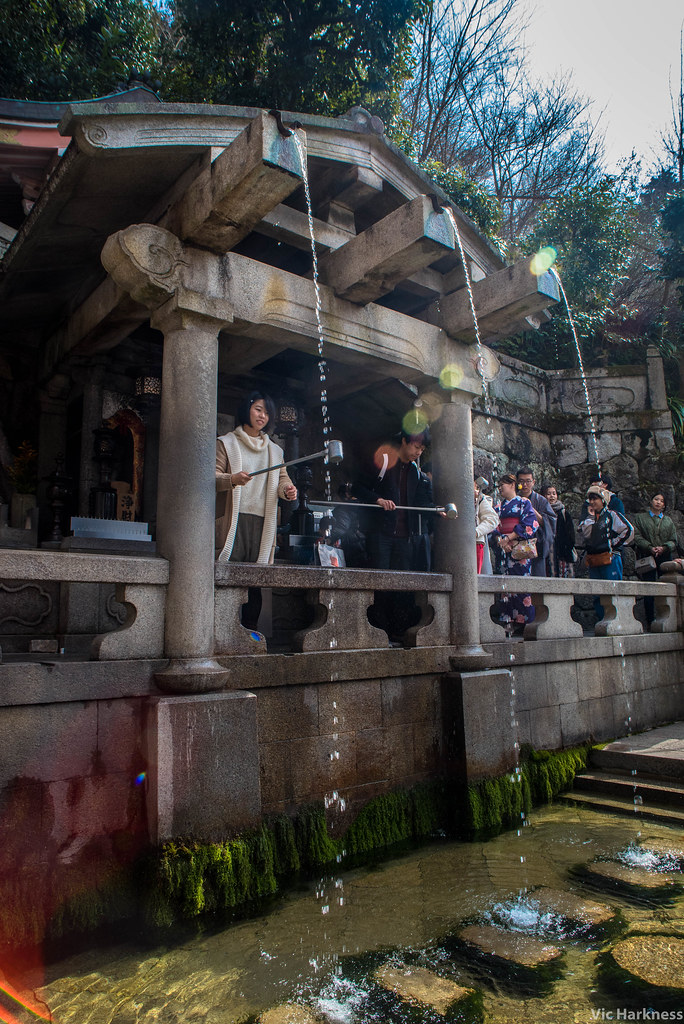 Catching and drinking the water here is said to have wish-granting powers; you can see in the edge of the photo the queue, which extends off-frame for quite some distance.

There were of course small tea rooms dotted around the site for tired walkers: 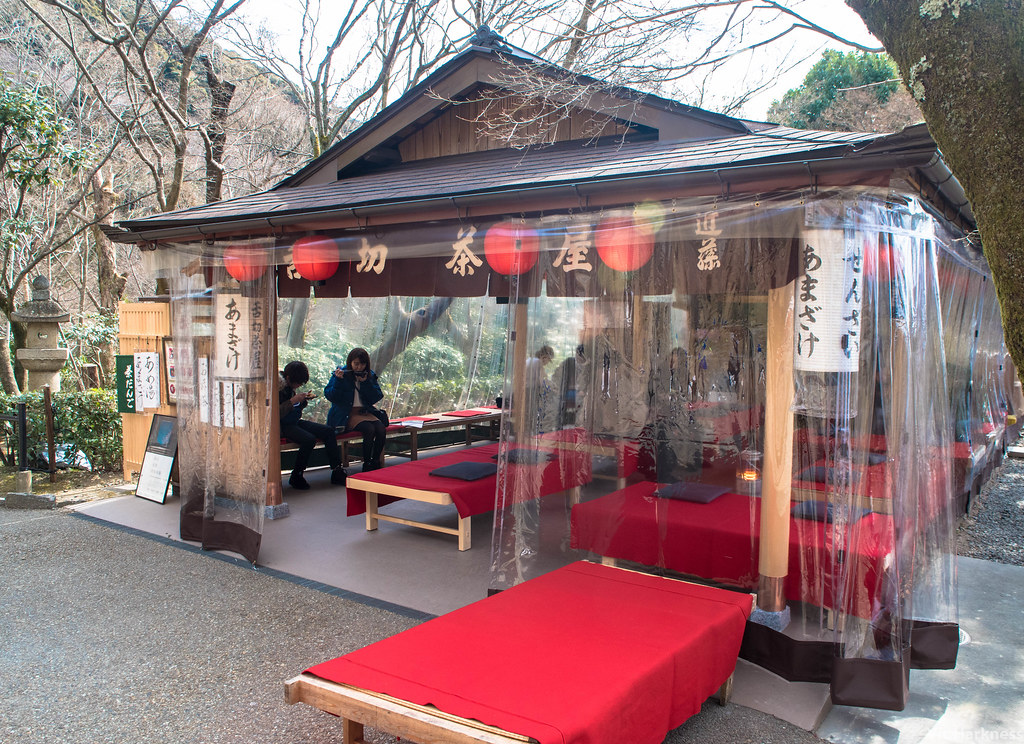 Interestingly, the complex also features the Shinto Jishu-Jinja Shrine, accessible through a torii. 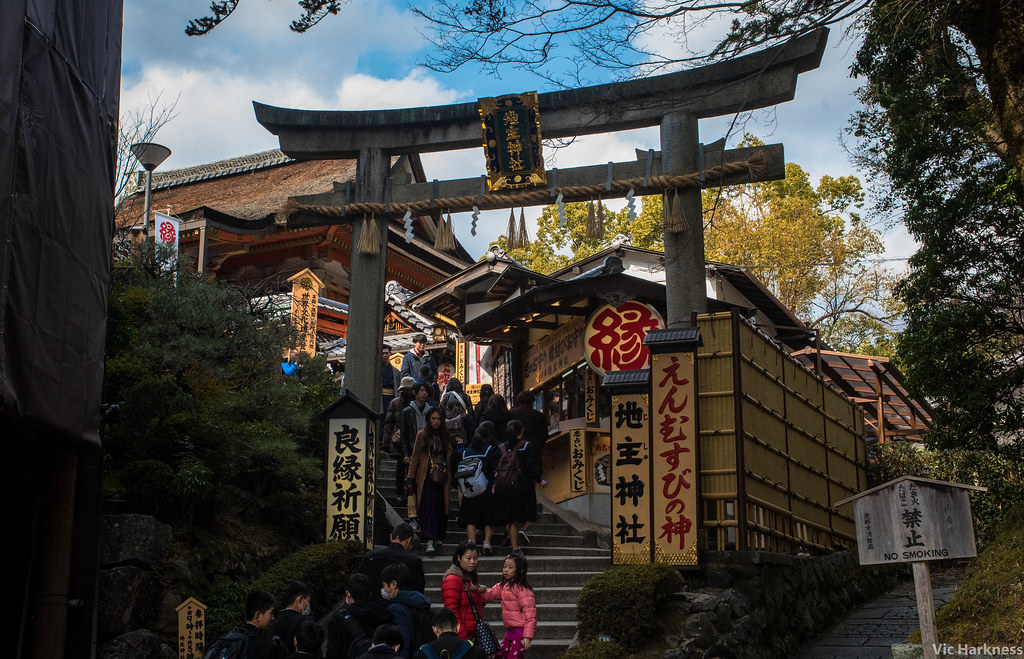 This shrine is also informally known as the Cupid shrine, as a lot of its offerings deal with luck in love.

The shrine features the usual locations to hang prayers: 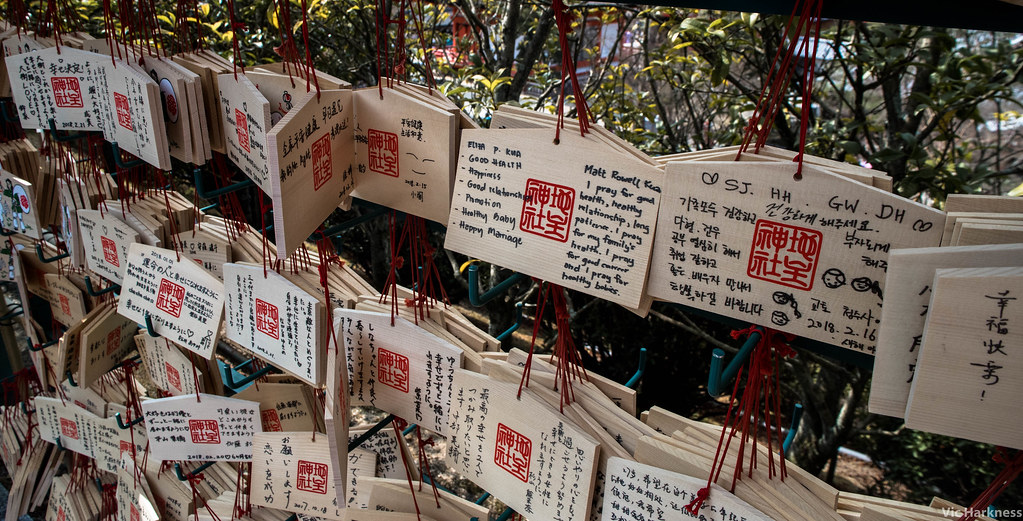 Omikuji (the paper wish strips that you tie on to frames) were also popular, but at this temple we saw something we hadn’t seen elsewhere. 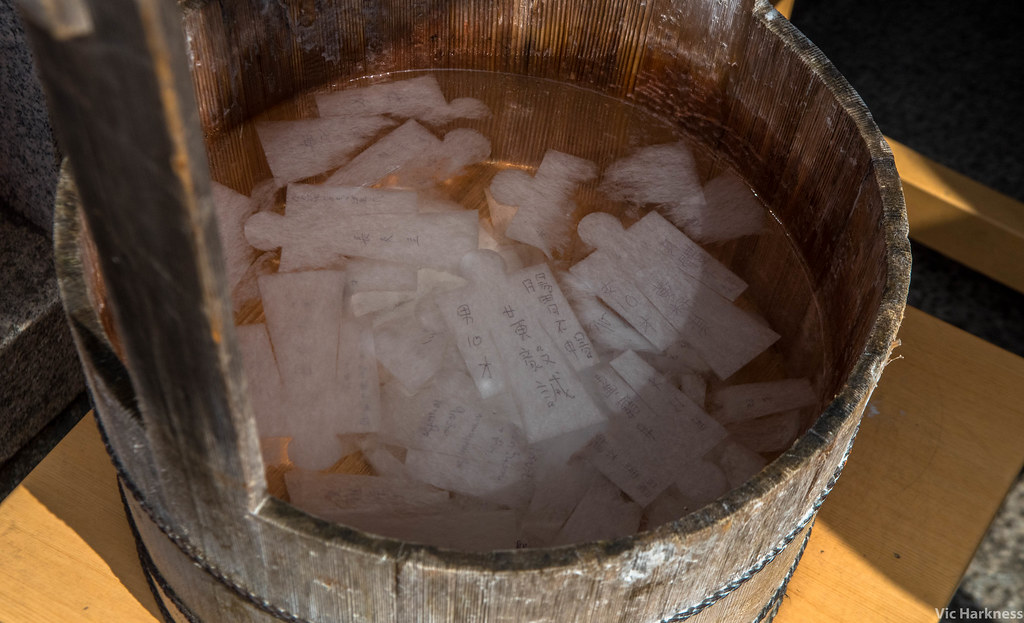 These are not part of a Buddhist practice, but a Shinto one. These little paper people are called Katashiro, and are used in exorcism styled rituals. To cleanse yourself of an evil presence, write your name on the paper and blow on it three times in the direction of the shrine. Wipe it on your body if you’ve got some real serious demons that you need rid of.

Another interesting practice that we learned about at this shrine is called Ushi no toki mairi, and again it’s something I don’t have access to pictures of currently. This practice, translating roughly as “ox-hour shrine visit” (with ox-hour referring to the time between 1 and 3am), is used to lay a curse upon a target.

The practitioner is typically a scorned woman, who must first dress herself in white and crown herself with iron rings holding three sacred candles. Nails are driven in to a sacred tree at the Shinto shrine (sometimes nails alone, at other times pinning an effigy of the target to the tree). The ritual must be conducted for 7 days in a row to work, and will be nullified if witness (probably why it’s done at 3am). If the ritual succeeds, the target will die. A tree at this shrine features the remnants of nails, and signs of many prior ones having been removed.

The shrine features the usual stall to purchase various good luck charms (mainly aimed towards luck in love), as well as various love-luck increasing activities to be undertaken. Yet another feature of this shrine which I don’t have photos of (sorry!) is a pair of “love stones” spaced 18 meters apart. If you can walk between them with your eyes closed, you will become lucky in love. If you need assistance to do so, then you will still be lucky, so long as you have help in love also.

Although we spent a relatively short amount of time at Kiyomizu-dera, I think that one could spend several hours here and not be bored. The temple complex is huge, with so much to do. 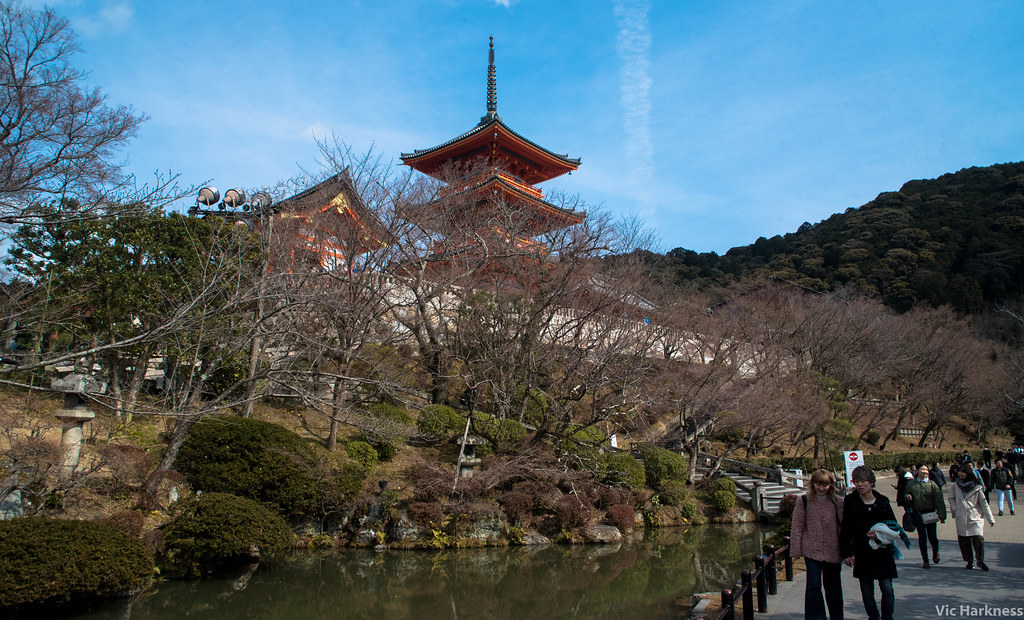 There are so many beautiful small shrines/temples, which one could easily spend a day visiting and learning about if they had a knowledgeable guide. 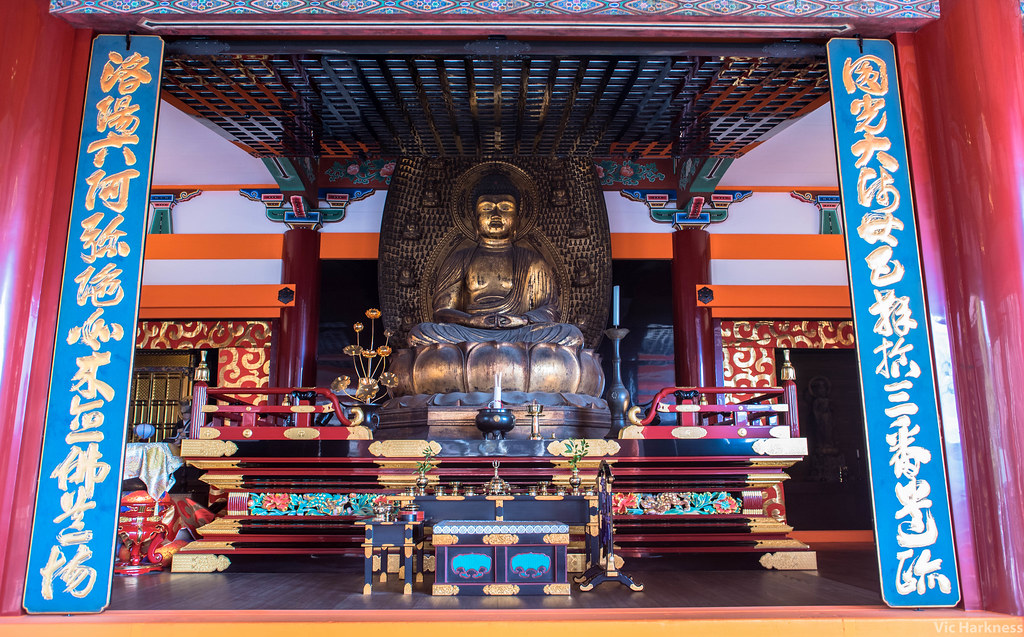 The colours of the temple are also incredibly striking in comparison to the dreary mountainside just coming out of winter, making it a beautiful site to visit all year round. 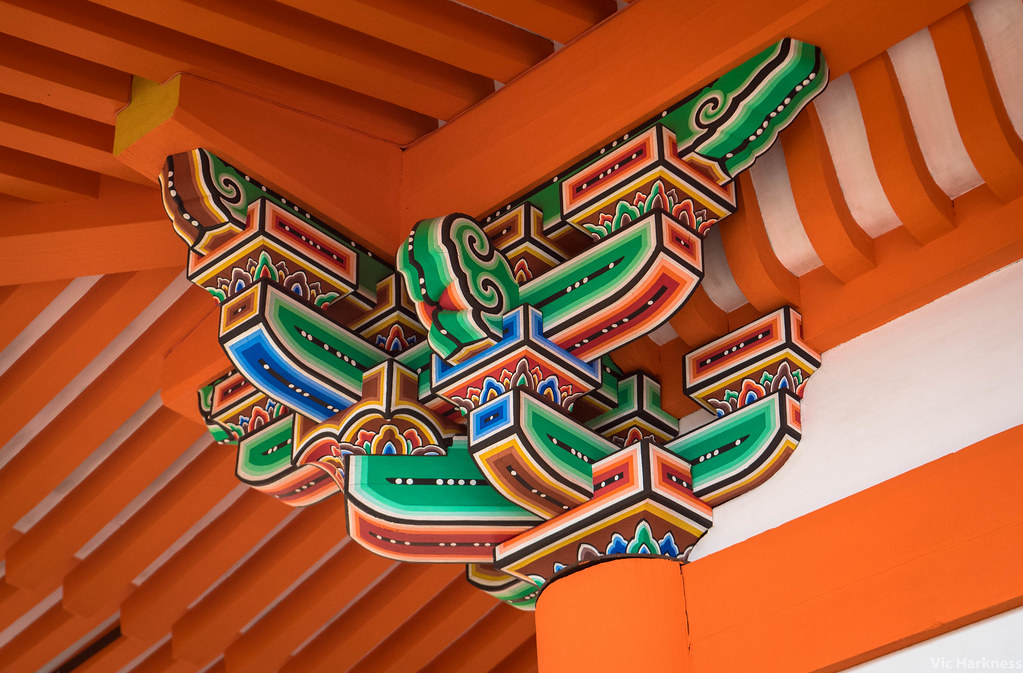 If you do visit this temple, I would recommend looking for more details information on all of the shrines here to discover which ones might be most relevant to you!