Published by Vic Harkness on February 2, 2019 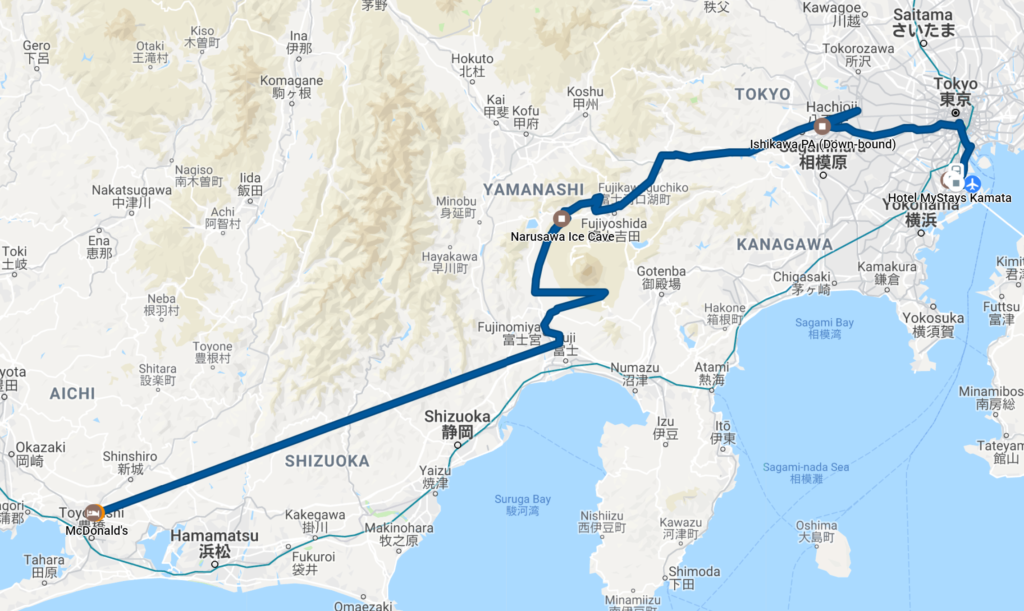 We left the hotel a bit later than planned, because we wanted a bit of a lie-in after the previous night’s disruption. From here we head to Haneda airport to try and find our rental car. This took quite a bit longer than anticipated as the company we used, as it turns out, is not based in the main airport building- they are instead in a smaller lot off the main site, which one has to take a shuttle to.

Car obtained, we headed out! We went over the famous Rainbow Bridge, so called because at night it’s lit up in rainbow colours. As a side note, the MariCar tour we took earlier offers a route which includes this bridge at night. 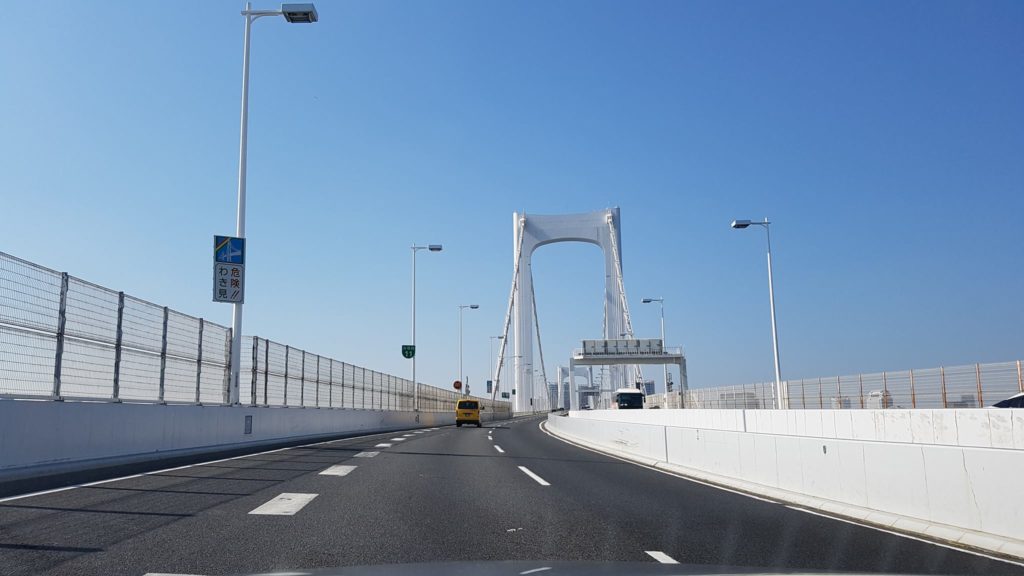 After a bit of trial and error, we made it on to the correct road. Japan has massive toll roads which let you avoid the main city. This made the drive quite expensive, but very easy to do- the roads sit on stilts above everything, making for a very direct route between your destinations. Our first one, Mt Fuji!

The drive took about 3 and a half hours, including a stop for food. I believe I had a noodle baguette, because Japan is weird. Unfortunately I don’t have access to the hard disc which contains pictures of this monstrosity currently.

In mid afternoon we are finally in the area, and getting our first glimpses of Mt Fuji. 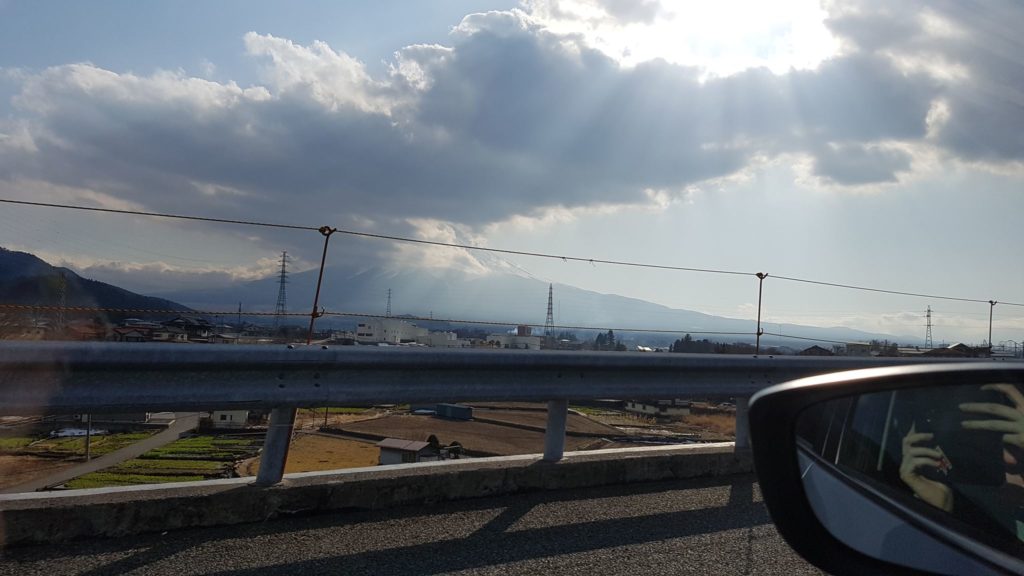 We stopped off at Lake Kawaguchi and took a few photos, lamenting the incoming clouds. 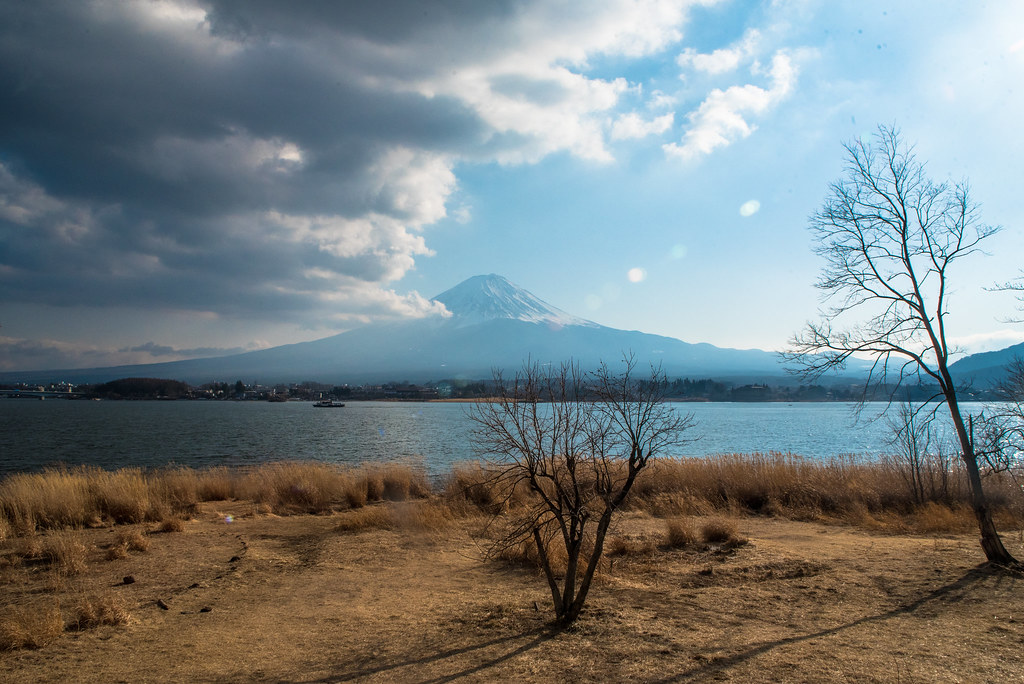 The weather being what it was, I couldn’t really get the images I had hope for. 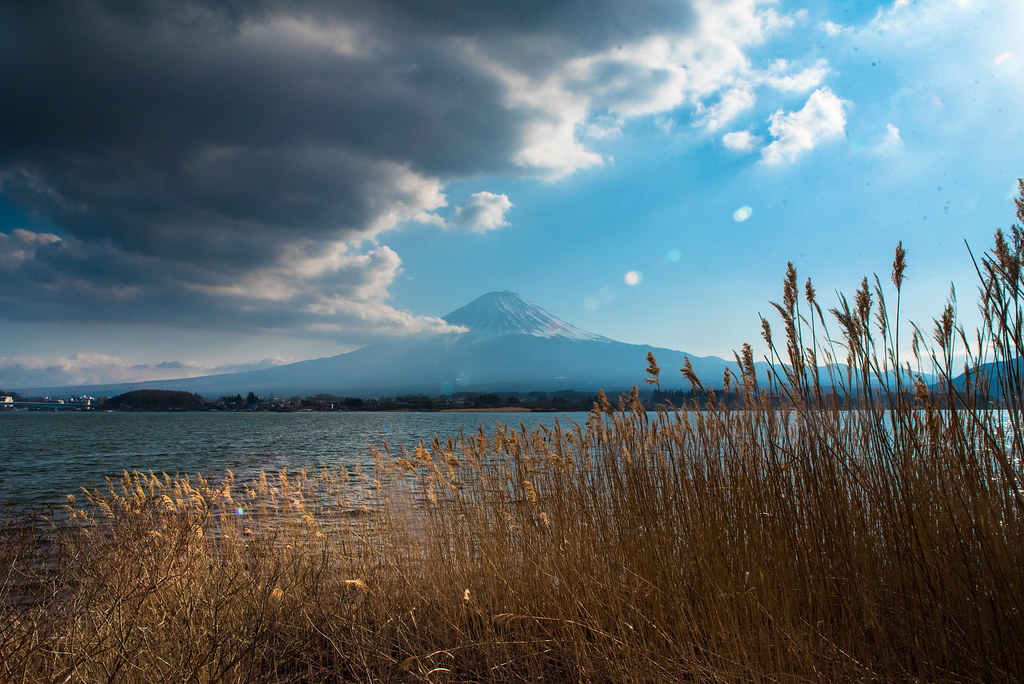 We decided to drive in a bit closer to Fuji. Whilst driving through Aokigahara forest, we spotted a sign for Narusawa Ice Cave. This sounded quite cool (pun not intended), and so we pulled over to take a look. Entry was fairly cheap, and so we decided to take a look. As it turns out, this attraction was exactly what it says on the tin- a cave full of ice. 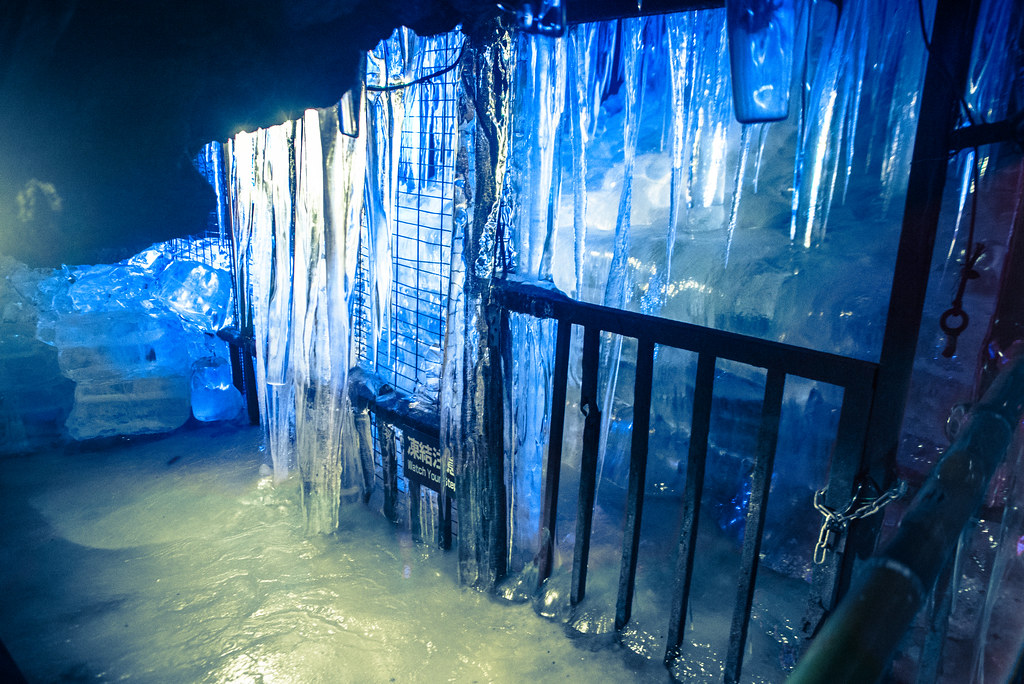 These caves were apparently formed from previous lava flows stemming from Mt Fuji- turns out that Fujisan is actually a dormant stratovolcano, meaning a dormant volcano that is built up of many layers of hardened lava, ash, etc. There are two other similar caves in the area, one being the Fugaku Wind Cave and the other the Lake Sai Bat Cave. The Wind Cave was a short walk from the Ice Cave, but we elected not to visit due to being a bit pressed for time. 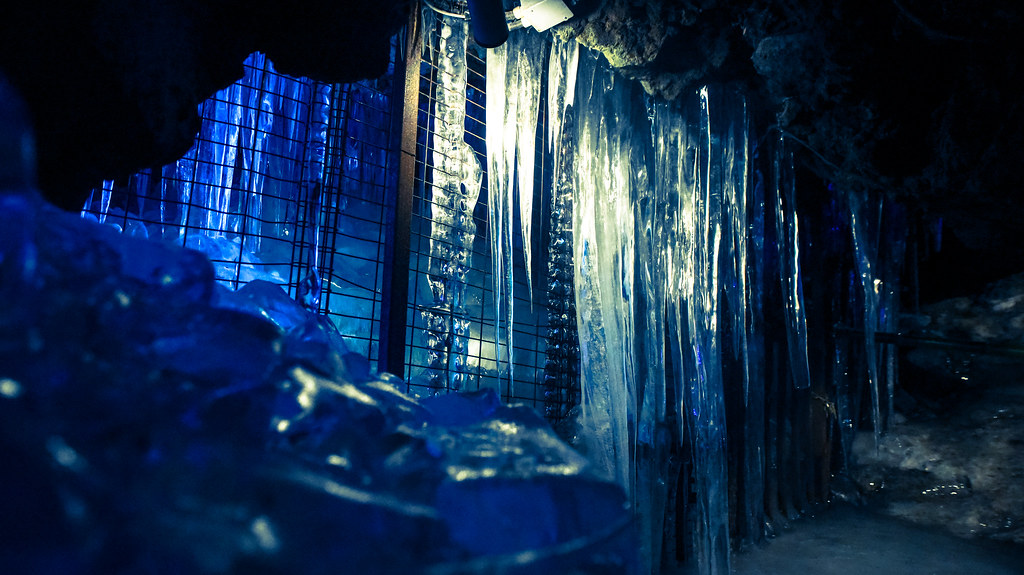 Photography was quite difficult in the cave due to lighting being very sparse. Still, it was pretty interesting to see the huge blocks of ice within! 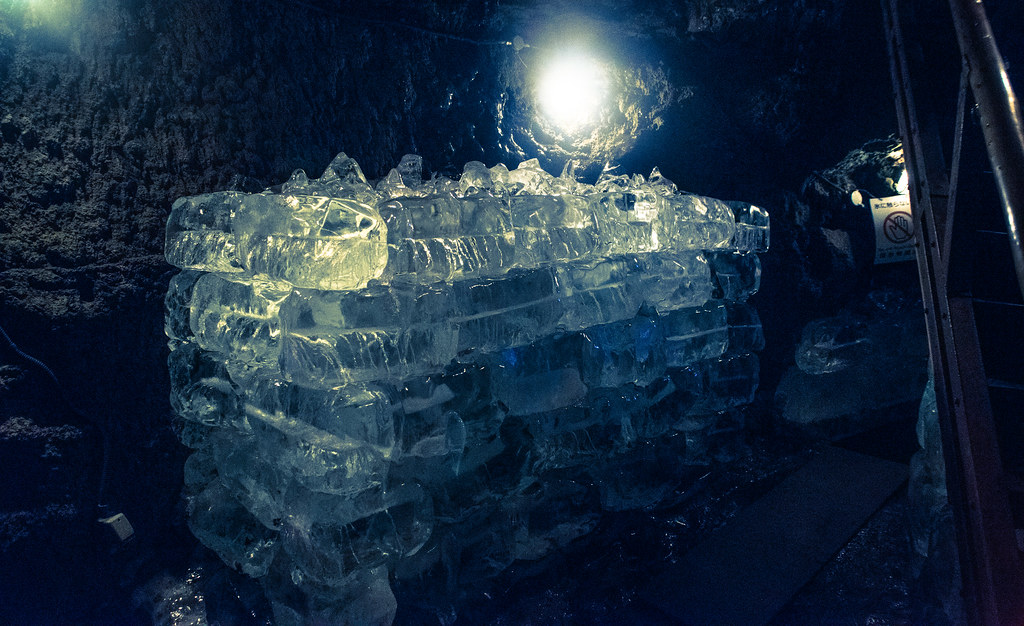 Apparently prior to the invention of the modern-day electric refrigerator/freezer, ice was taken from here to be used in food storage. 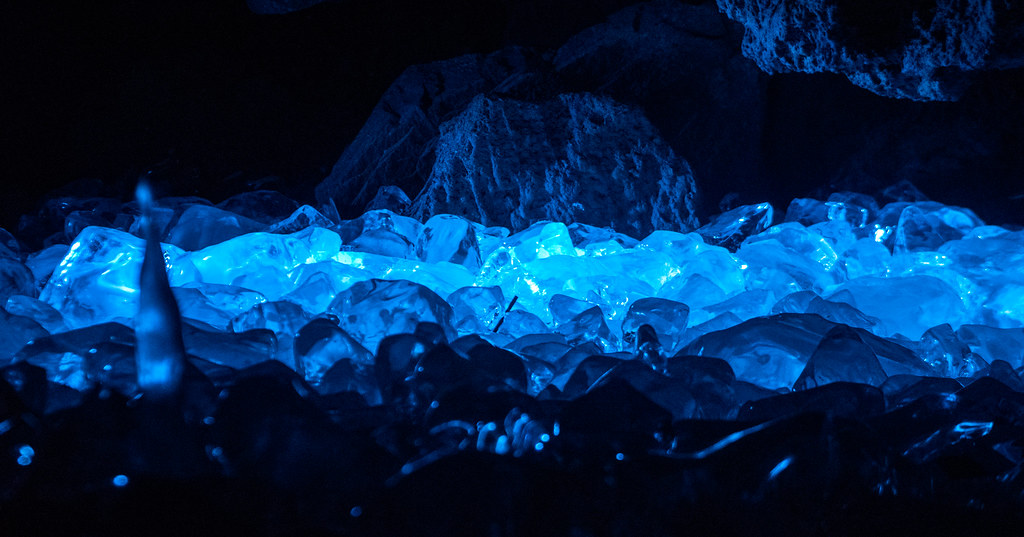 The gift shop for the Ice Cave was quite interesting- I really didn’t appreciate how many possibilities there were for Mt Fuji branding! Options included wine jelly (no, we did not try it). 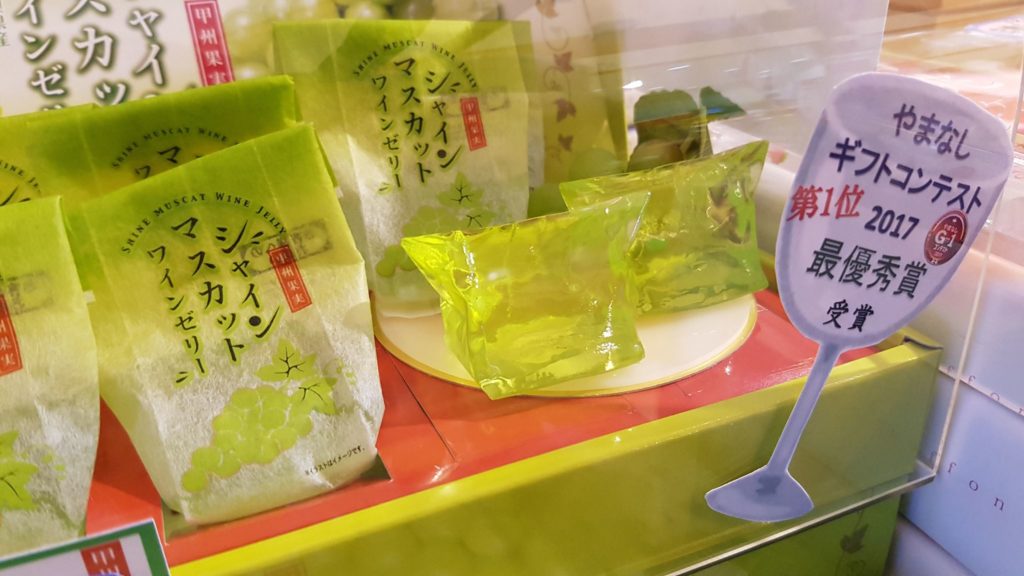 From here, our journey towards Fuji continued. As we drove on through the Aokigahara forest, we would occasionally see red ribbons/ropes tied to the trees. 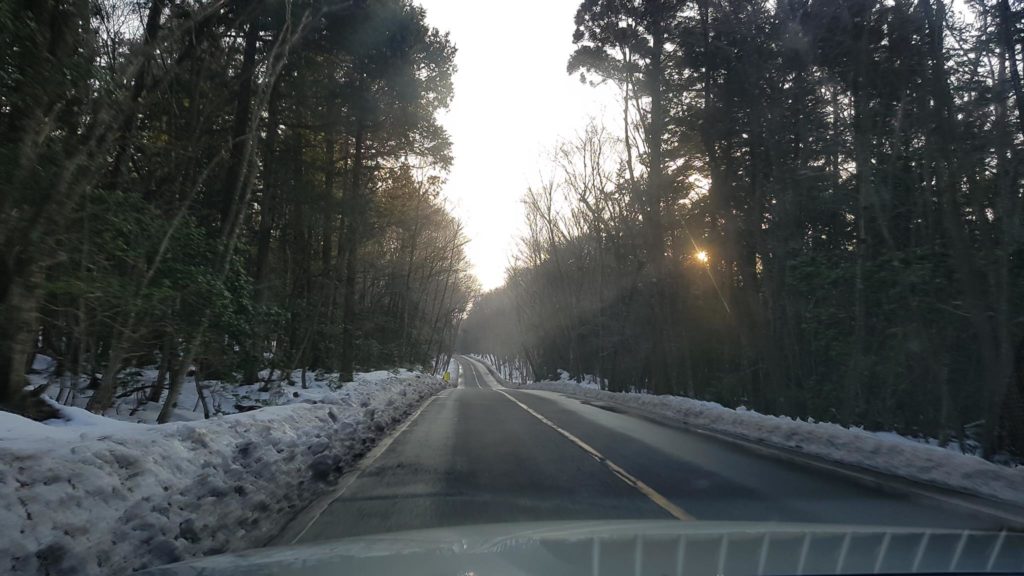 As some of you may be aware, the Aokigahara forest has another name- the Suicide Forest. Subject of many horror movies, this location is a popular choice for suicide in Japan. As such, the forest is said to be home to many yūrei (ghosts of the dead). The ropes we had spotted were potentially tied there by people heading in to the forest who were undecided on their fates- they wanted to be able to find their way out again if they changed their mind. Numerous volunteers roam the forest looking for people wandering it, as well as to locate any bodies. We noticed that most carparks/side roads had been blocked off with logs, perhaps to discourage visitors.

We drove along the Mt.Fuji Skyline, taking in the views of the mountain. Eventually we parked up, and took a few more photos. The clouds had cleared by this point, but we were now unfortunately losing the light.

From here we drove on for another ~3 hours to where we planned to stay for the night- a town called Toyokawa. We arrived late and the edge of the town was quite sparse, and so we settled on a McDonalds for dinner. I was very disappointed to learn that Japanese McDonalds is very very similar to English McDonalds, in terms of both menu and taste. I’d assumed that there would be at least some deviations, but there you go.

The hotel that we stayed in was called Hotel Crown Hills Toyokawa. This hotel falls in to my previous on accommodation that I have made in my prior posts- cheap hotels in Japan tend to be a bit crap. Stick to hostels if you’re trying to keep things cheap, they’re a lot nicer.

I’d say I regret my choice for us to rush Fuji. It’d be nice to spend a few days in the area, especially in the summer with all of the beautiful flowers that grow in the area. A good plan for a future trip, perhaps!