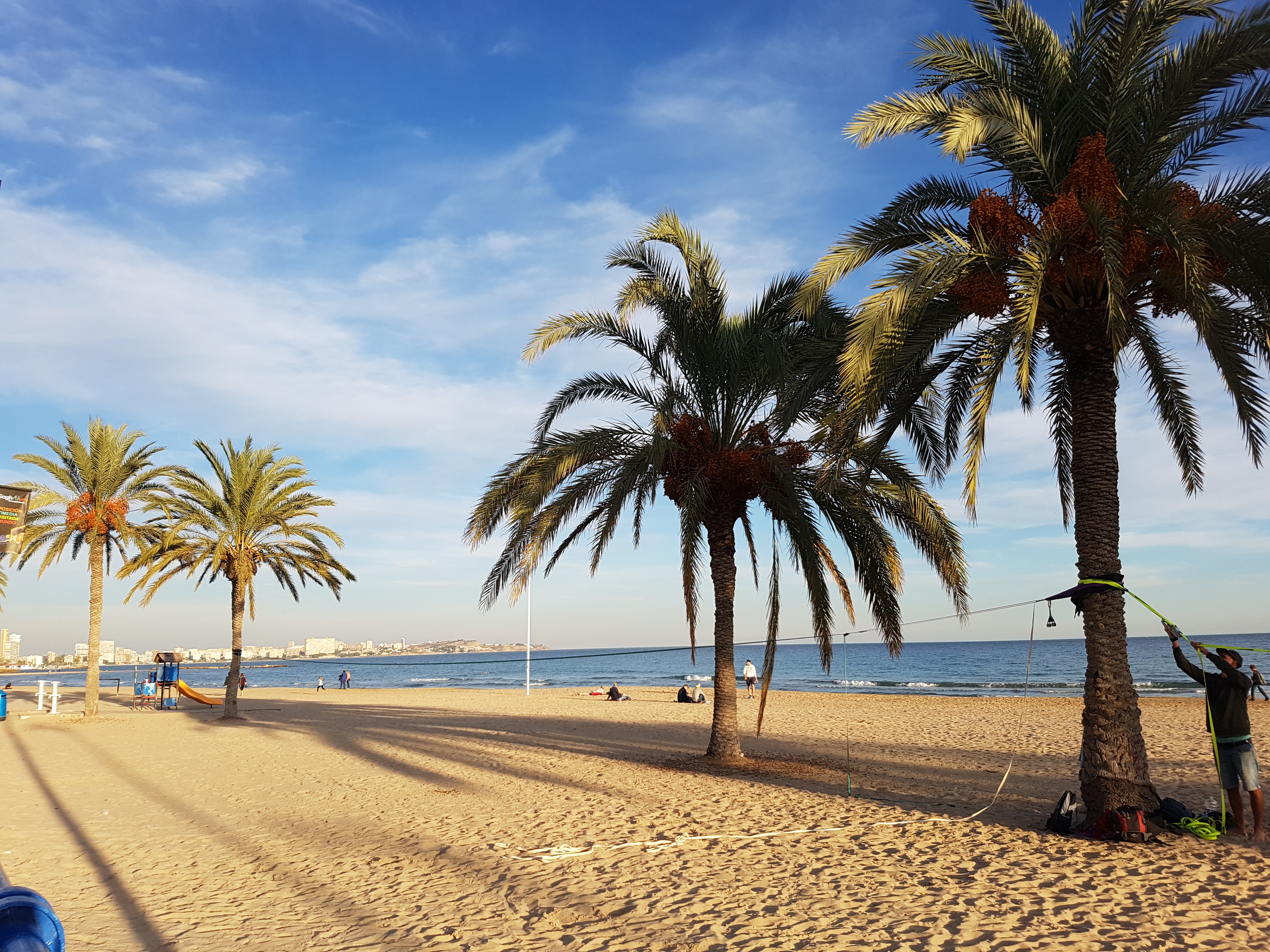 A quick trip to Spain

Published by Vic Harkness on December 3, 2018

I had a few days to kill, and so decided to pop over to Alicante. Turns out if you go Wednesday-Friday in a random week in winter, it’s incredibly cheap; £50 covered both flights and the hotel for two nights. These flights were with Ryanair, and meant that I got to experience their new bag policy. Traditionally, you can take two bags on a flight for free- one for the overhead, and one to fit in the chair in front. Generally everyone would bring these, and overhead space would fill up before everyone had boarded, meaning a large proportion of carry-on bags were being checked in to the hold.

Now, you have to pay for £10 priority boarding if you want your overhead bag. As I was only away for 2 nights, I figured that I would be fine with just a backpack with some changes of clothes. This caused me one slight issue- where would I fit my camera? In the end I decided not to bring it. My phone’s camera is decent enough, and I wasn’t really planning too much sightseeing in Alicante as I wouldn’t have a car.

Experiencing the new bag policy first hand was pretty funny. Previously, only a small (read: impatient) percentage of the flight’s passengers would bother with the priority boarding. Now, the vast majority had. This resulted in ~50 people coralled in to a small waiting area that was probably designed to hold 20, having to stand whilst us ~10 non-priority peasants lounged in our free range standard boarding pen.

The flight itself was uneventful, but I do so love the views (when cloud coverage permits). 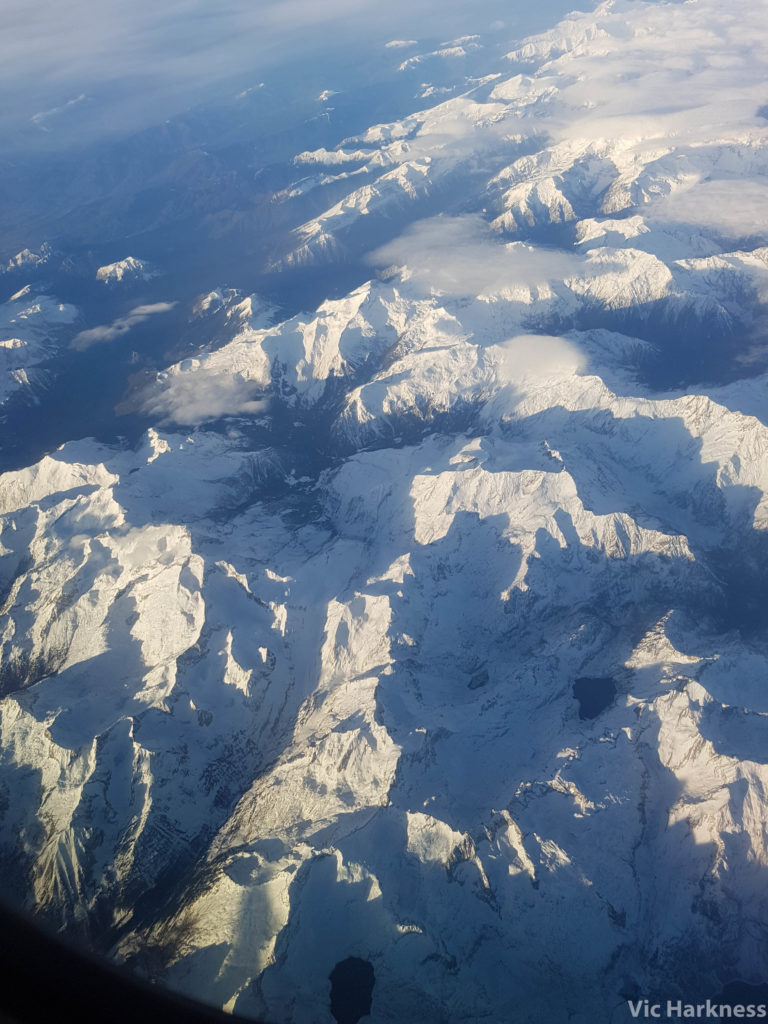 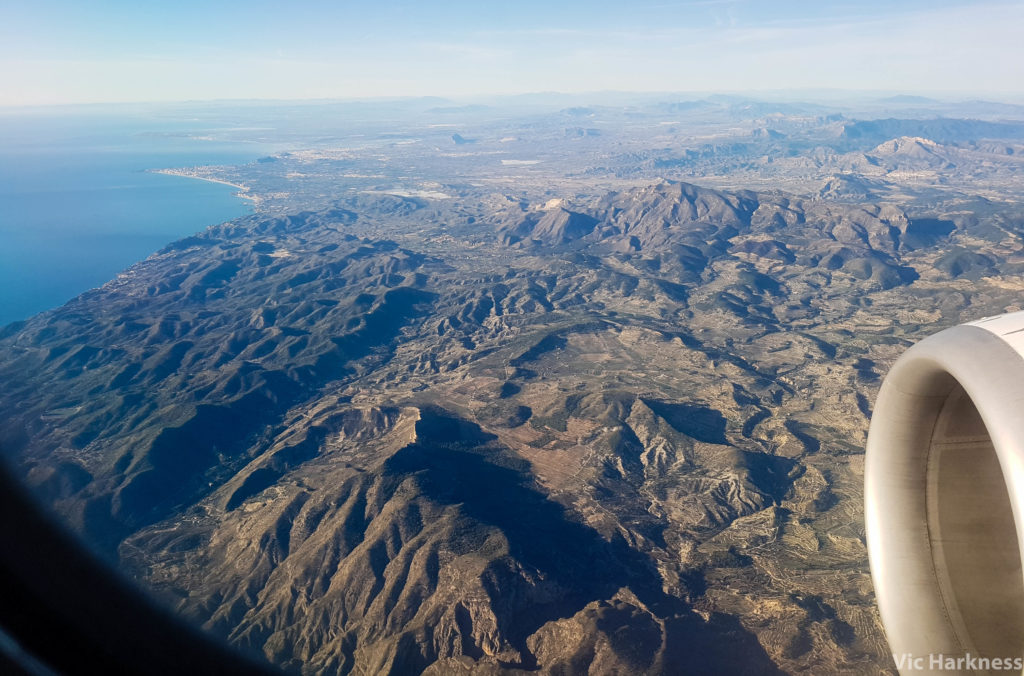 After landing in Alicante airport, a short bus ride took me in to Alicante center. The sun was shining, and the temperatures were upwards of 20c (England had been less than half of that when I had left). 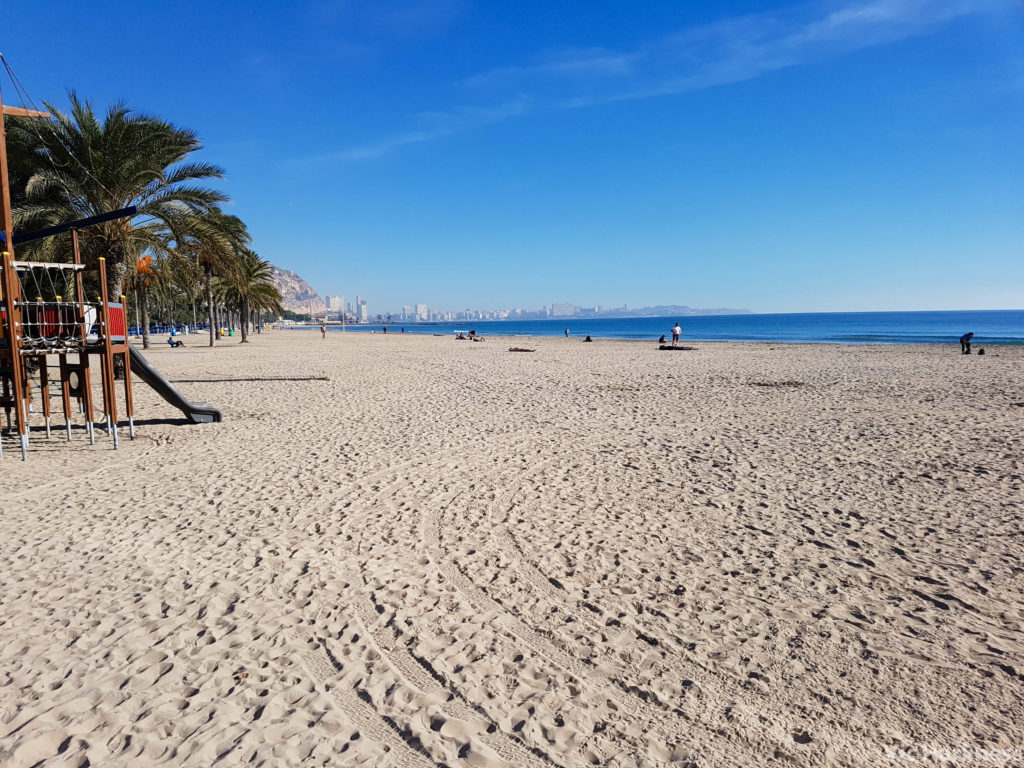 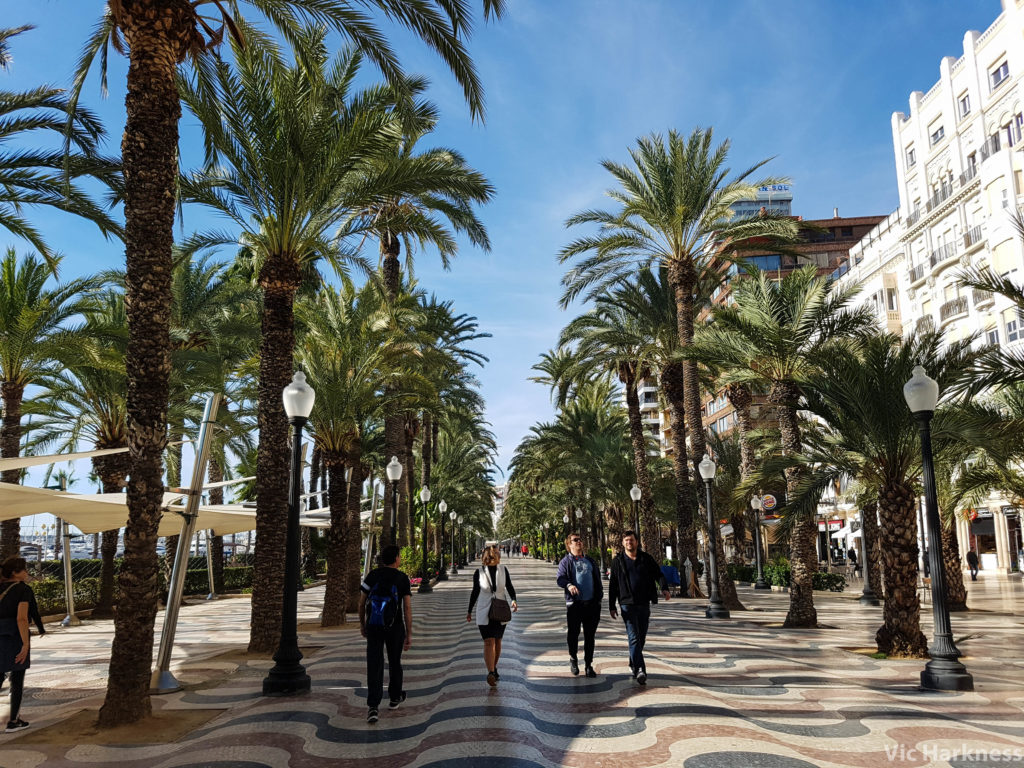 Although I’ve flown from Alicante airport before, I’d never previously been in to the city proper. It was nice to finally explore it a bit. It generally felt like other south-eastern Spanish towns that I had visited (Torrevieja is a favourite destination of mine). I spent my first day wandering a bit aimlessly. I went to the giant food market in the city center, wandered the beach (playing some Pokemon Go), and had some light tapas. 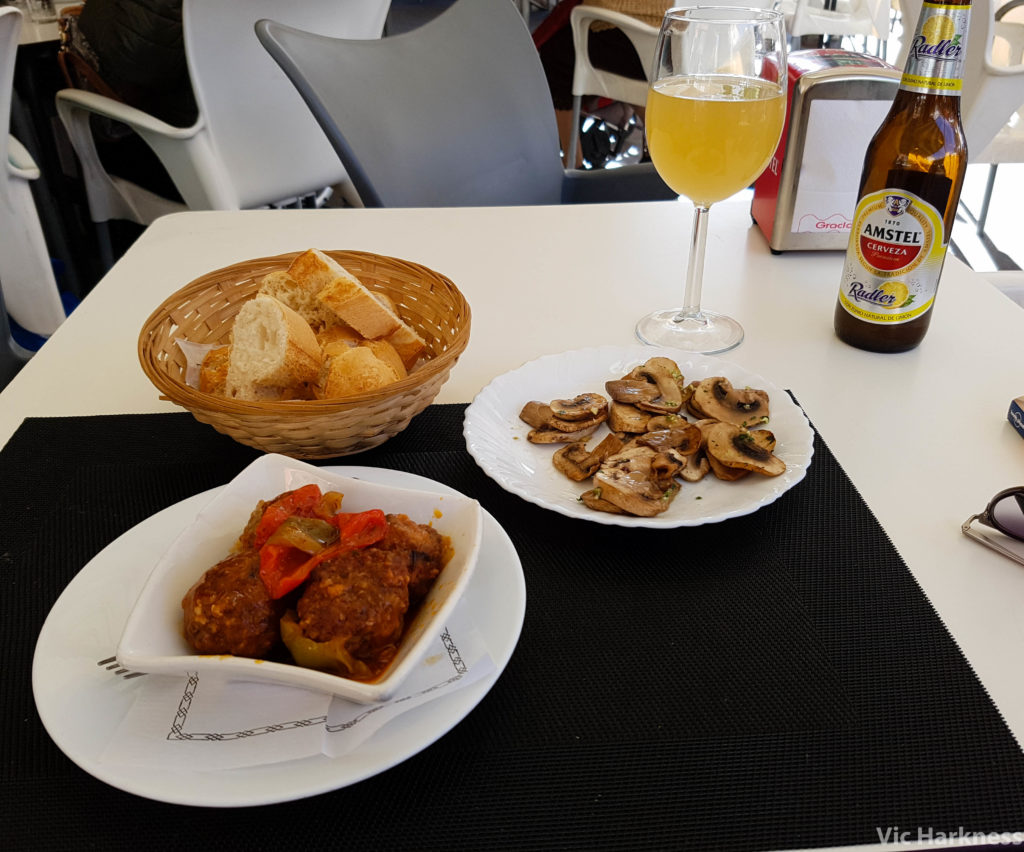 One of the things that I love most about Spain is how prolific the fish are. On previous trips I’ve taken great joy in harassing them with my GoPro, even if they aren’t particularly exotic looking. I wandered over to take a look at a statue of a surfer down by the docks: 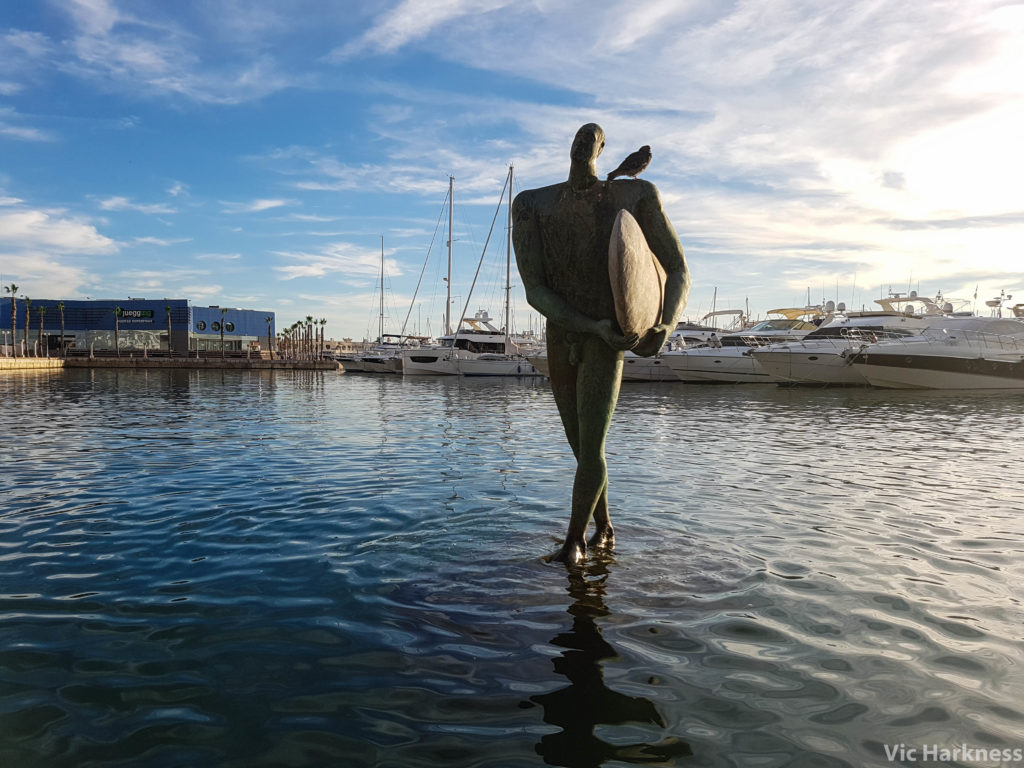 Only to notice a large school of fish: 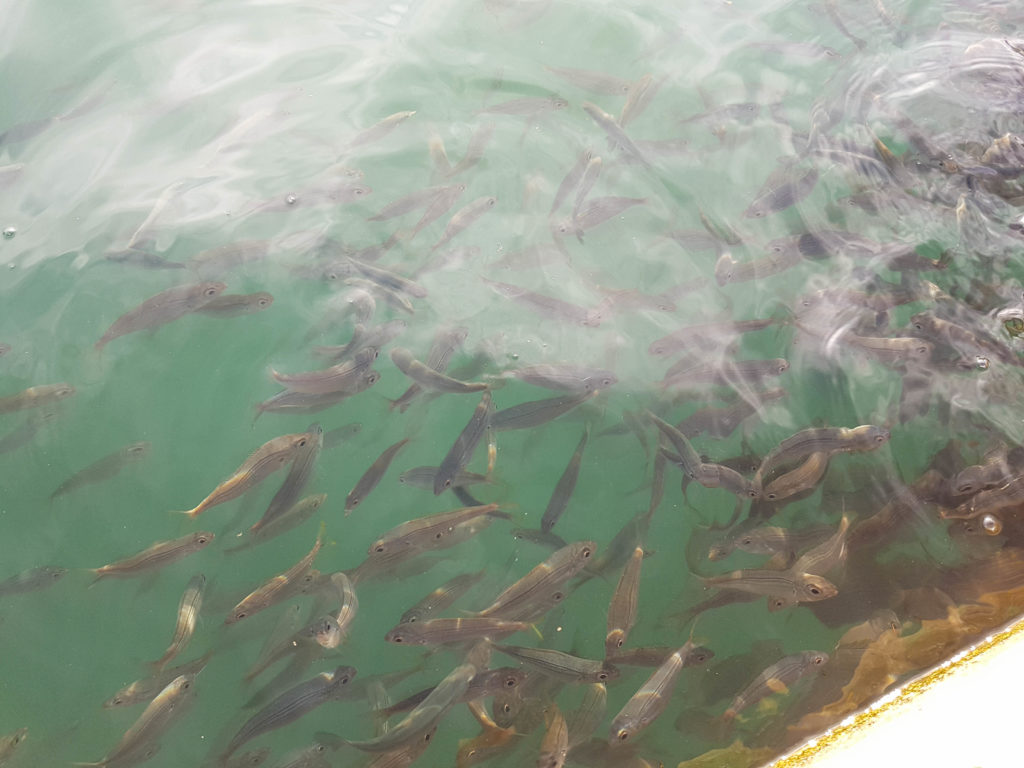 I spent some time sat here watching people feed the fish, soaking up the sunshine.

On day two of my trip, I had a better idea of what I wanted to get done. I found a cafe which let me practice my Spanish a little (i.e. they didn’t immediately reply to me in English), and after breakfast I headed down to the seafront. On the previous day I had spotted the Santa Bárbara Castle, and decided I would go up it. For €2.70 you could take a lift up to the hill to it, which I did because I’m a lazy person. There was no fee to enter the location itself.

Although the castle itself wasn’t of too much interest to me (history buffs I apologise), the views from the top are stunning (and appear to be a favourite for postcards). 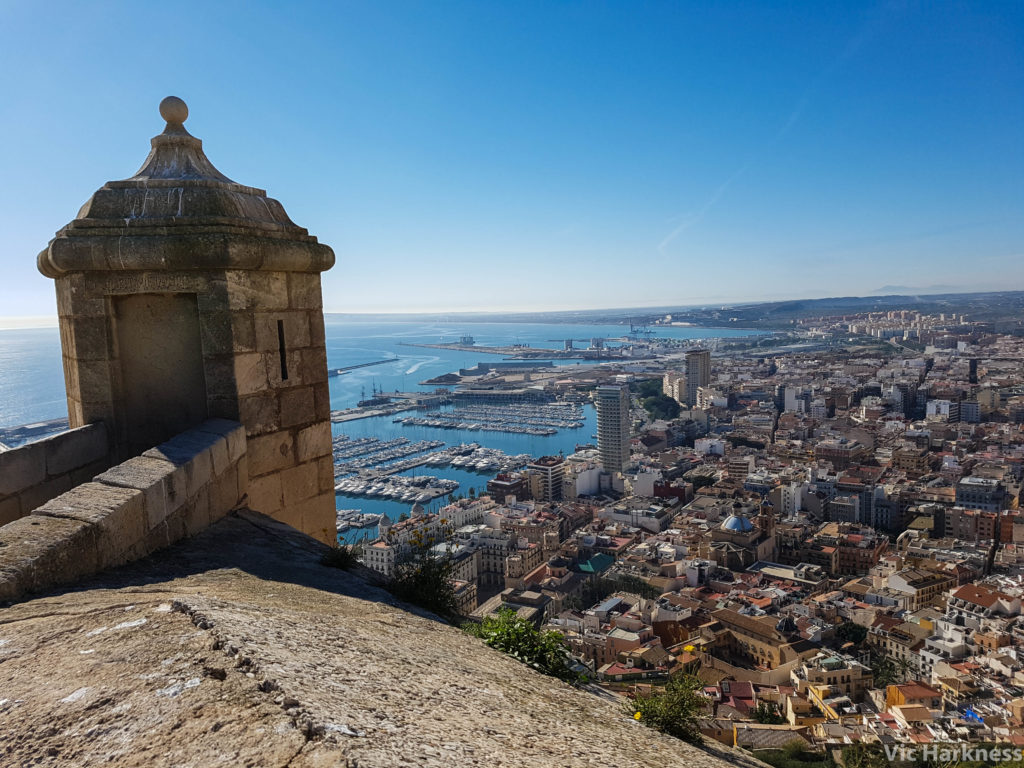 It was a bit frustrating to not be able to get exactly the pictures that I wanted due to lack of camera, but somehow I survived. I’m sure I will end up visiting the area again, hopefully for longer and with my full kit. 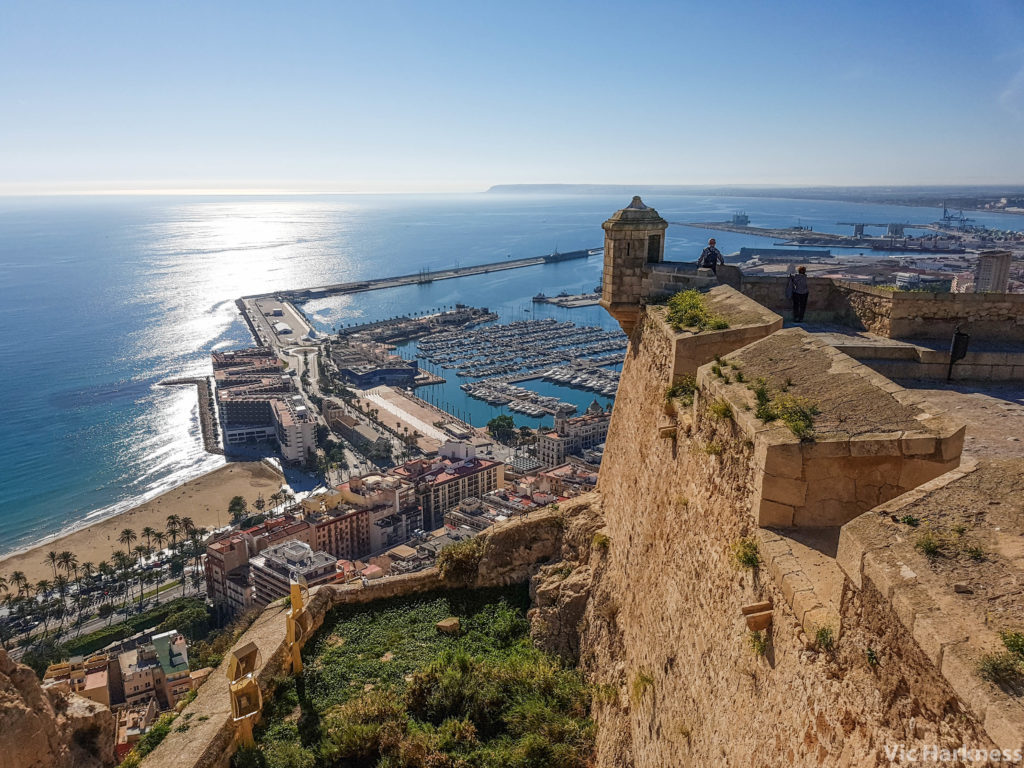 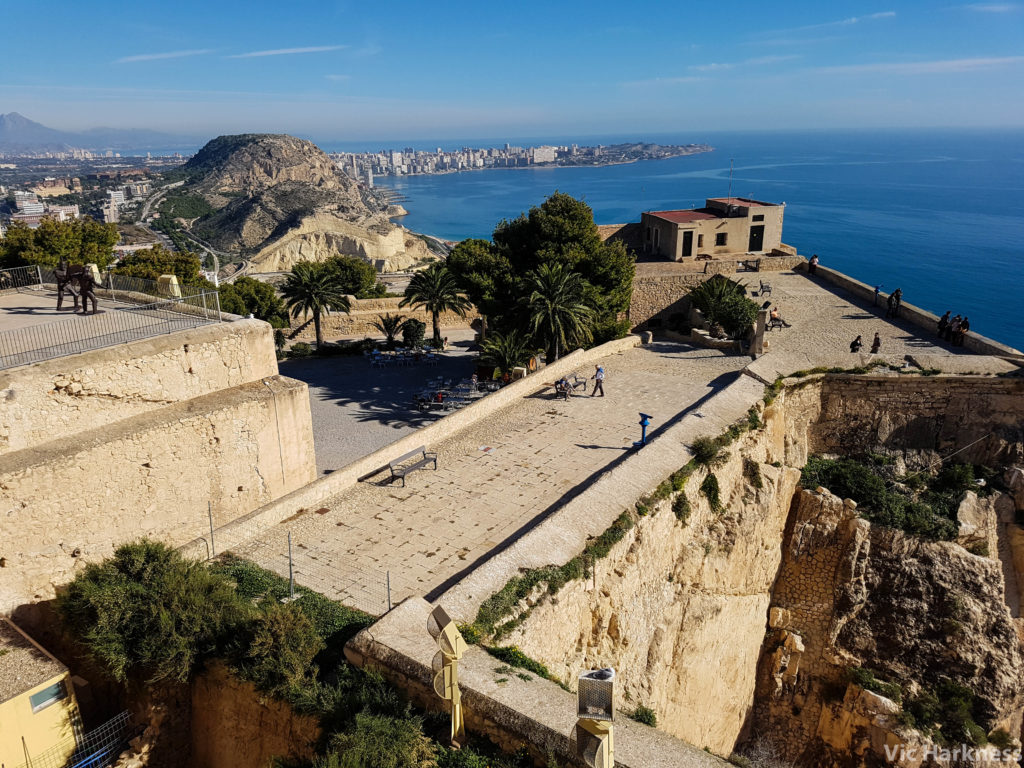 There was also a large population of seagulls up here, which seemed fairly nonplussed by tourists such as myself. 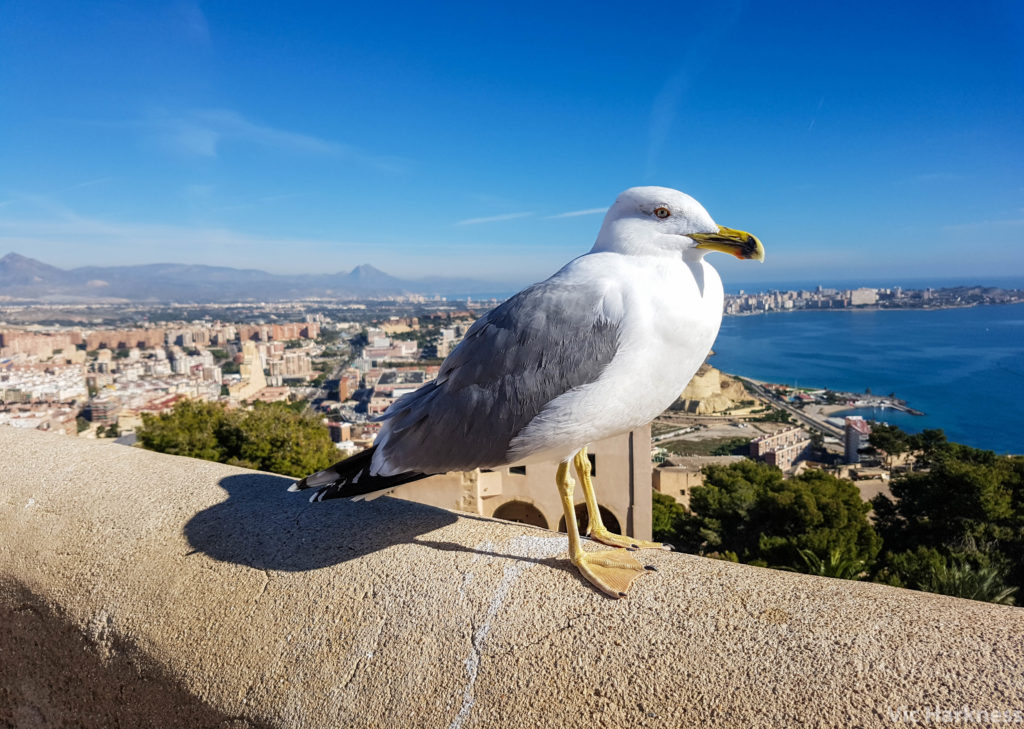 There is large amount of aerials up here: 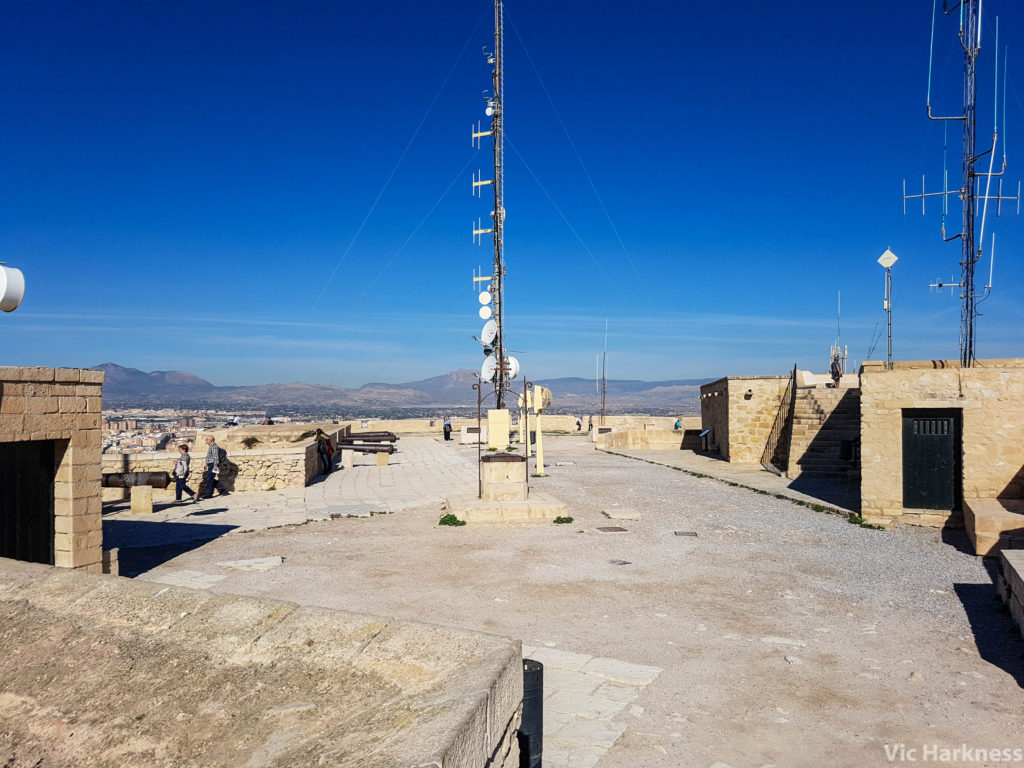 Which are apparently of some risk: 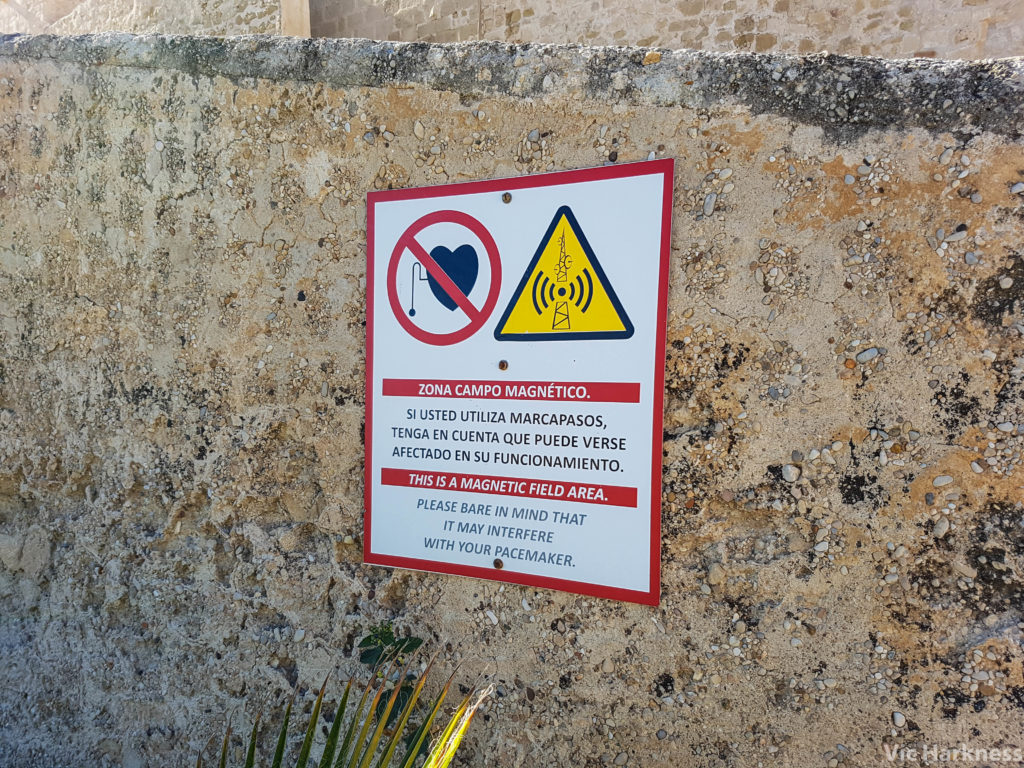 I personally couldn’t feel them, but I imagine a pacemaker is a little more sensitive than a lump of neodymium.

When trying to work out what places I want to visit, I’m very visual. I’m easily swayed by seeing a cool looking building from afar, and getting a high vantage point really lets me indulge this tendency. The view from the back of the castle is this: 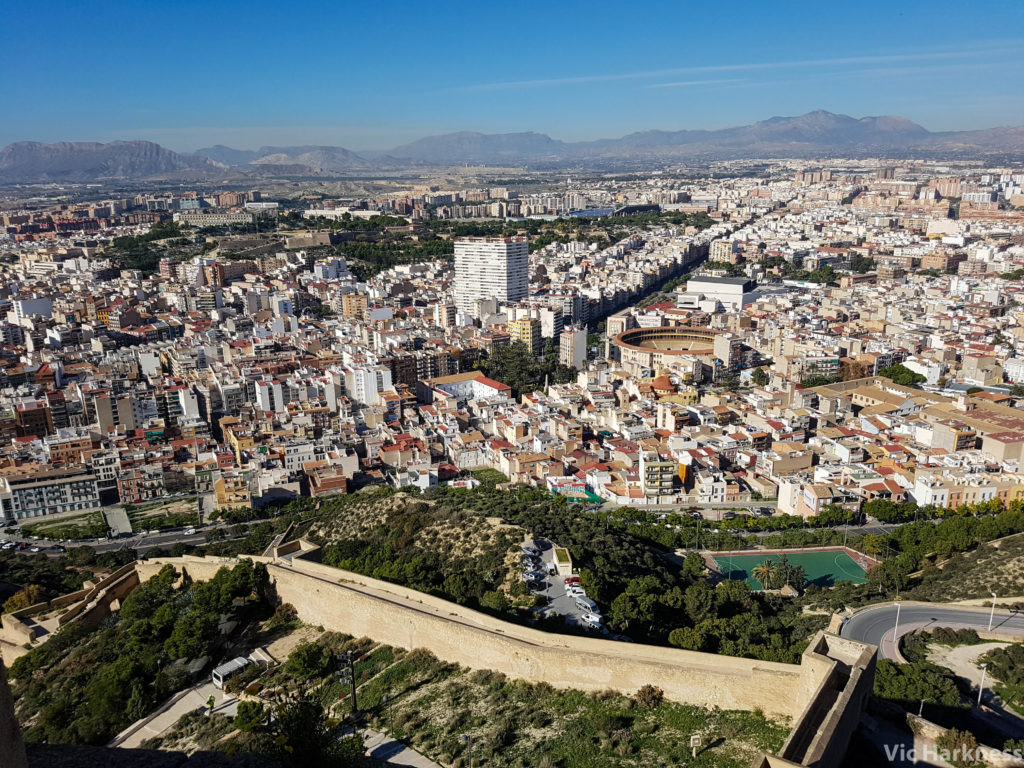 From here there were two things that interested me. Firstly, the colosseum looking ring. Secondly, another building on a hill (less obvious in the photo). I loaded up Google Maps, oriented myself, and plotted a route towards the interesting ring as for whatever reason, Google Maps was not picking it out as a point of interest.

I walked down to the location, and discovered that it was in fact a bull fighting ring (the Plaza de Toros). The museum for the ring was shut, but a side door to the ring itself was open. I’m not sure if it was supposed to be open to the public as there was work being done on it, but no-one questioned me going in so I assume it was OK! 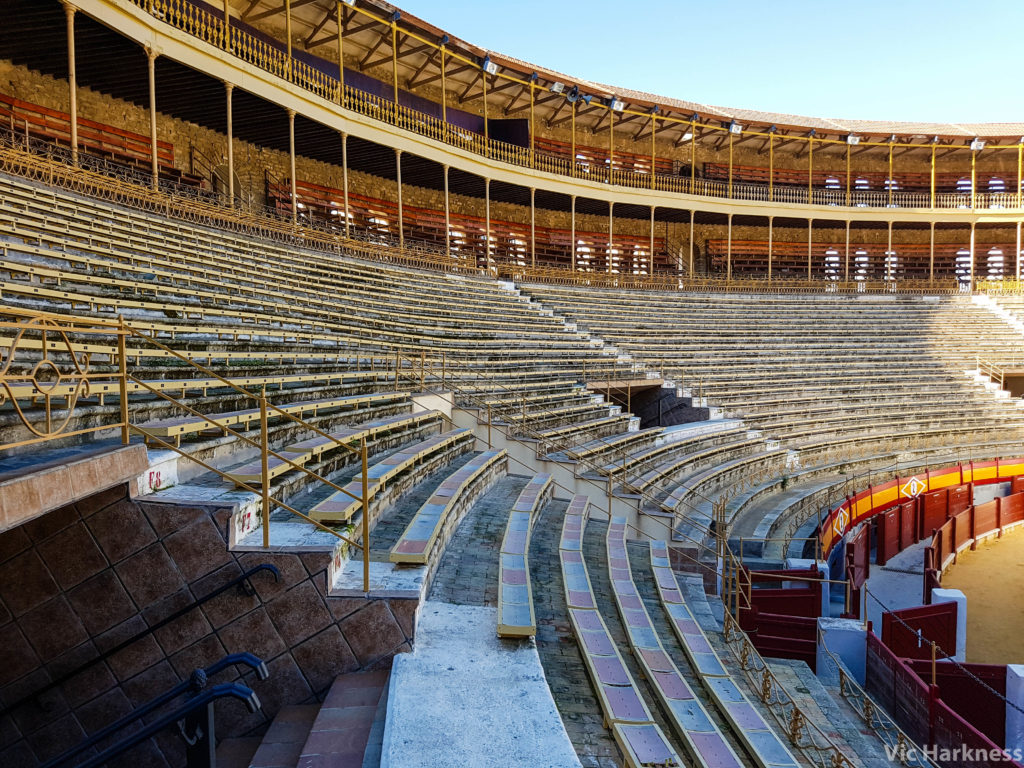 I was able to climb up the stairs to the top ring, and attempted a panoramic photo with my phone, with a limited amount of success.

Inside the building making up the ring are the mounted heads of various bulls, alongside posters advertising previous fights.

After wandering around here for a little bit I re-oriented myself again, and set out for the second hill that I had spotted. This turned out to be the Saint Ferdinand Castle, which was much less high up than the Santa Bárbara Castle. Still, it provided some nice scenic views of the area (although much less dramatic). There were even kindly provided frames for ones pictures. 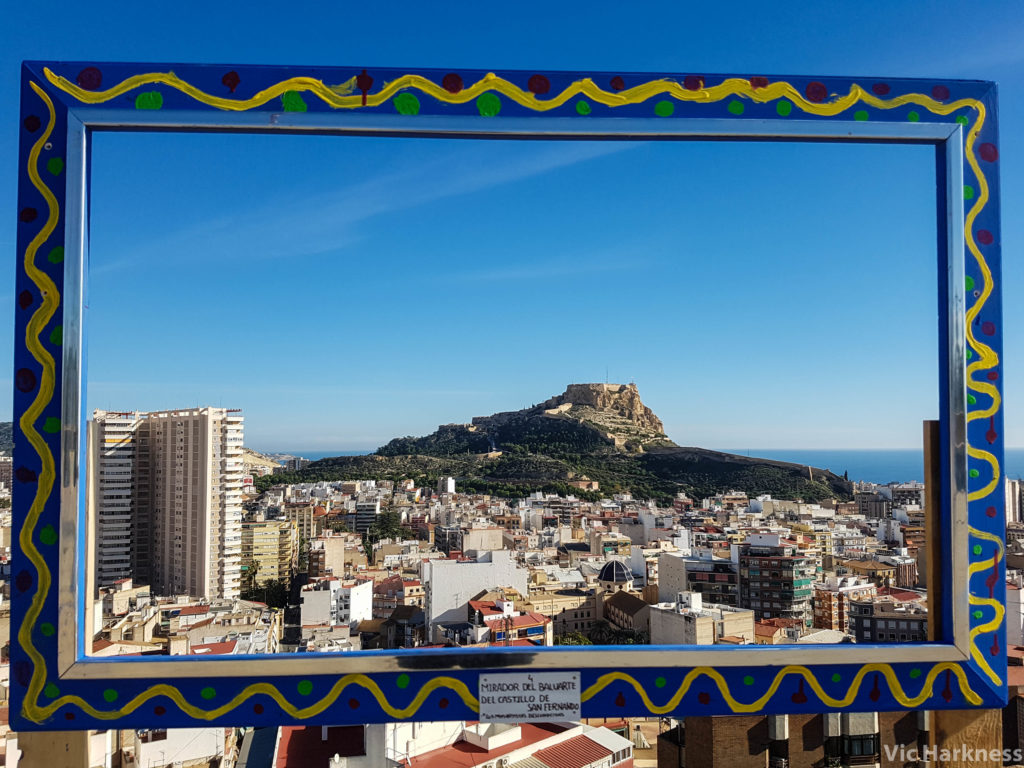 There was a nice little cafe at the top of this hill, where I stopped for a drink and to write some postcards. 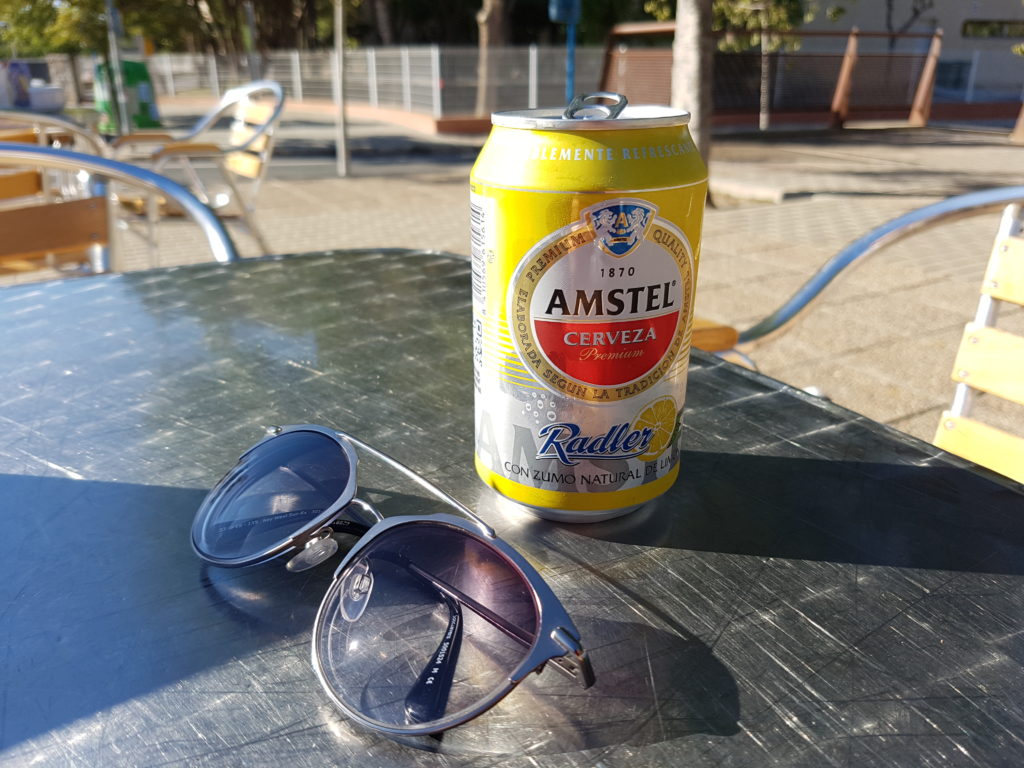 Incidentally, I’m now a fan of Amstel with lemon. It’s only 2% alcohol and tastes quite a lot like lemonade, making it very drinkable.

From here, I decided to play a bit of Pokemon Go. I wandered down the side of the hill, and around near the bottom of the other castle. 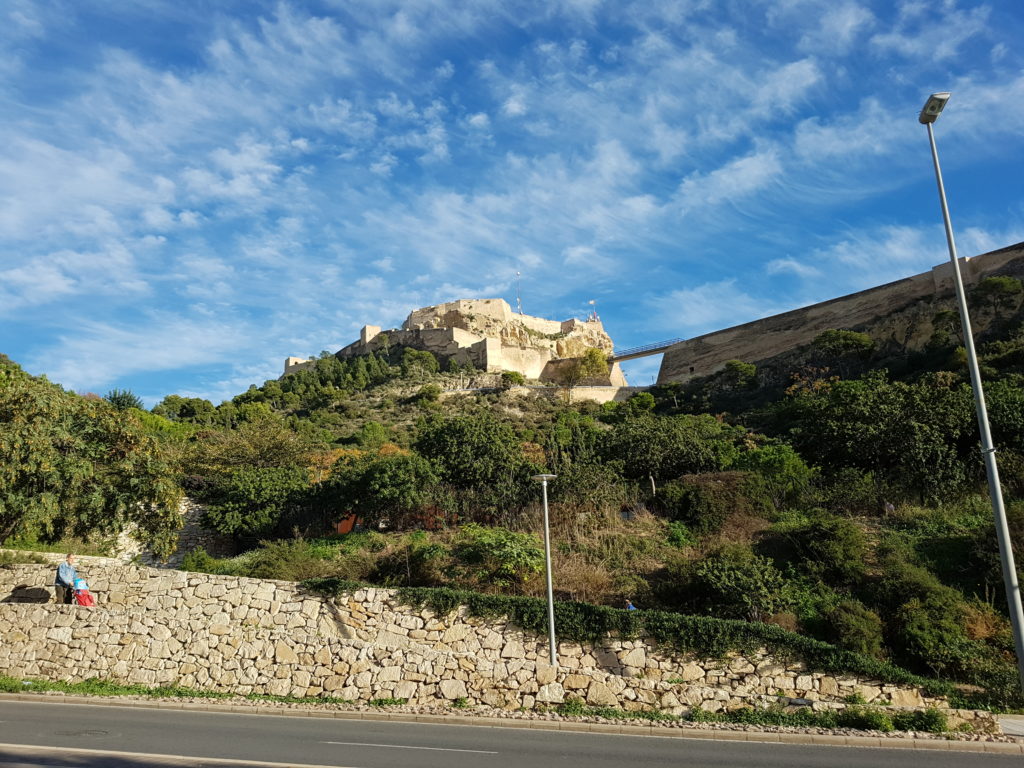 I also spotted a huge grasshopper (I’m always shocked by how much bigger they are overseas compared to in the UK). 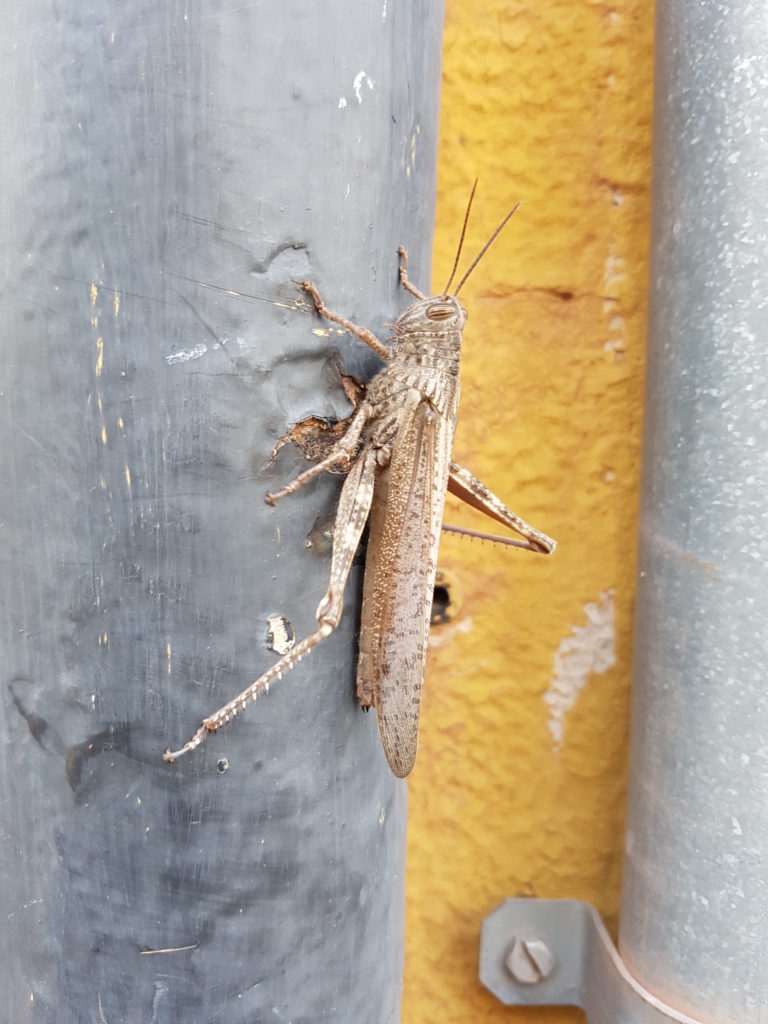 While wandering around the areas designated as being of interest by my Pokemon Go game, I noticed that a guy was wandering a very similar route, also clutching his phone. I decided to go make conversation to practice my basic Spanish a little more, but it turns out that he had lived in England for a few months in the past and so spoke fairly good English. We ended up playing Pokemon Go together for a while, comparing the language differences in the game. After a while we went to grab a drink, which became several. 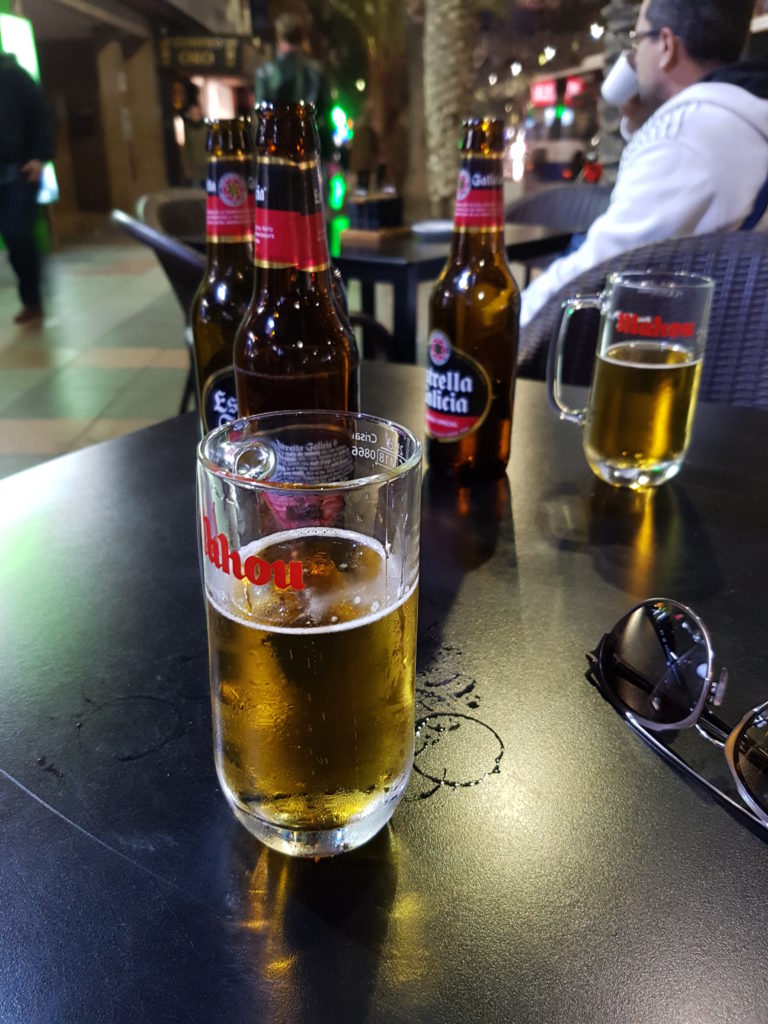 We ended up chatting for a few hours over drinks and food, and it was really interesting. He helped me with my pronunciation a bit, and we discussed Duolingo (the app that I am using to help learn Spanish, and that he is using to learn German). I had guessed already that Duolingo sometimes uses odd words for things (assumedly because it is based on Mexican Spanish rather than Spanish Spanish, a difference which I am to understand is akin to American English and English English). One notable example was cars- Duolingo had taught me that they are “carro”. My new friend, Alex, told me that this isn’t really the word that you would use in Spain, as it means “cart” more than “car”. Instead, the word to use was “coche”.

Pronunciation was a hot topic for the night. It turns out I was pronouncing “pollo” (chicken) as a native would pronounce “polo” (ice-lolly). After a bit of practice I managed to get that one sorted, although I still seem to be incapable of trilling my “r”s correctly. Conversation turned to swear words, mainly the cliché “puta madre”. I was under the impression that this was used to call someone a “son of a bitch”, but Alex told me that this is incorrect. Although there isn’t quite a useful literal translation, it isn’t a curse per se- it is actually used when something really good happens! To call someone a son of a bitch, the words I would be looking for are “hijo de puta”.

Interestingly, “bitch” is a word that Alex struggled with. The difference between “beach” and “bitch” were as subtle to him as “pollo” and “polo” was to me. After a bit of back and fourth, he managed to learn the difference. Swearing is educational!

Having made friends with a local was quite useful when it came to food time. We went to a tiny Spanish taverna, where the staff spoke zero English. With the help of my new-found translator I tried some more traditional tapas, which I thoroughly enjoyed. 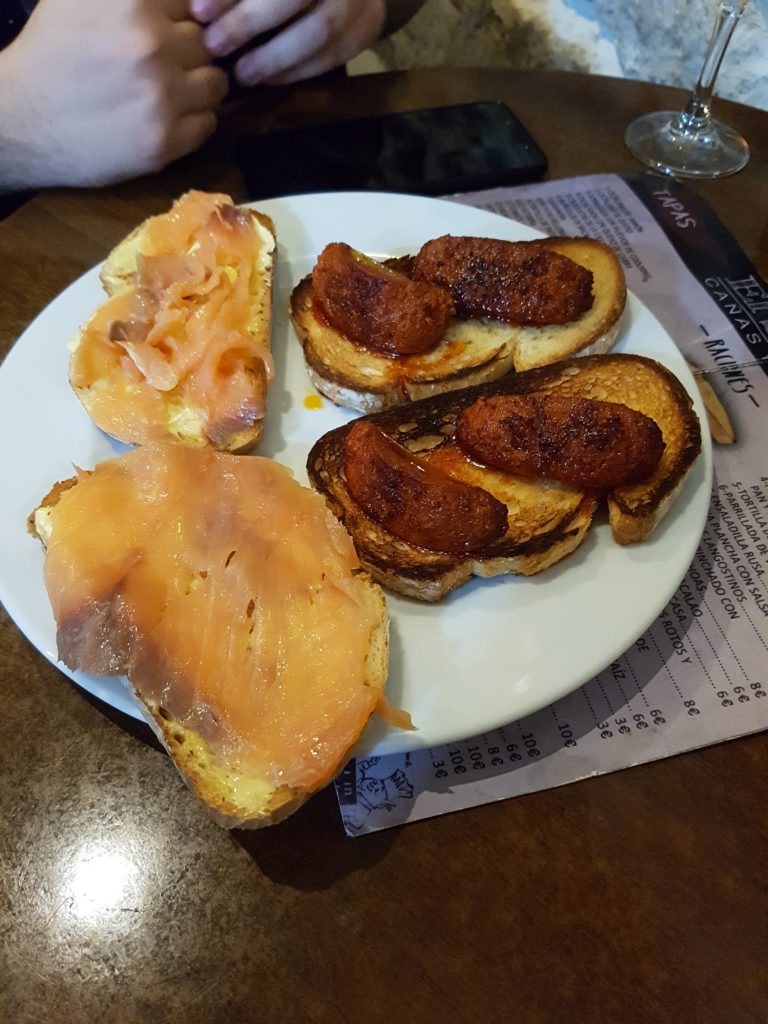 I did take issue with one item however. This food did not have a name- the menu item translated roughly as “snack food of fried potato and onion with egg”, which I thought sounded quite interesting. Ordered alongside some fried anchovies, this is what we received: 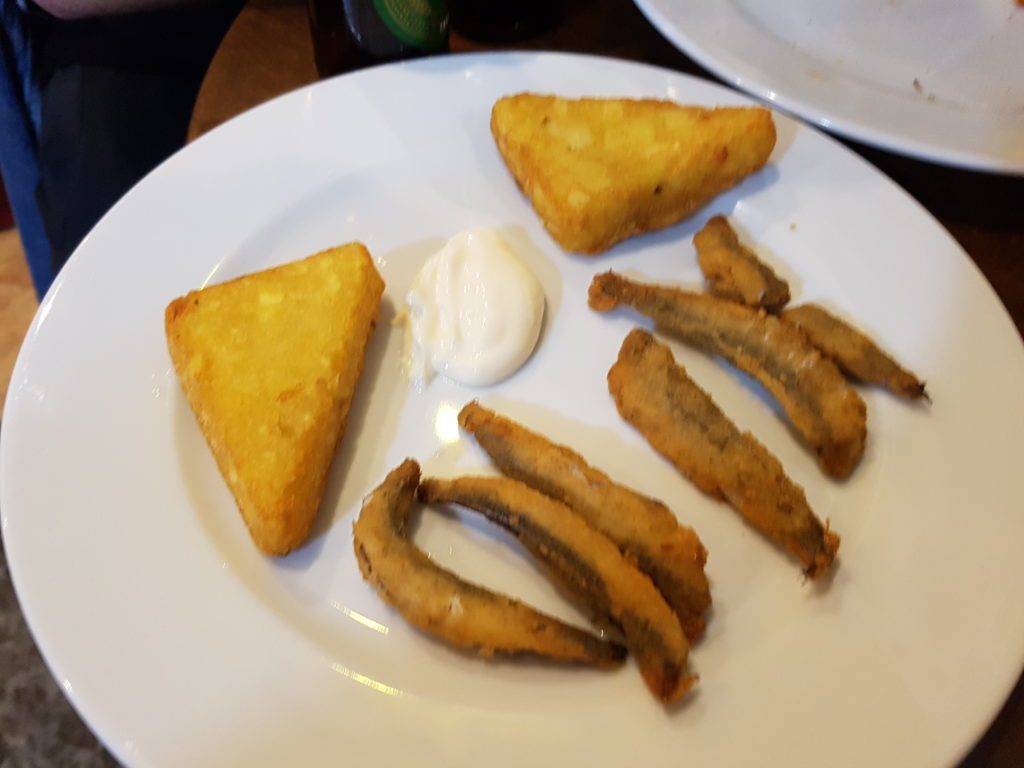 Hashbrowns. Bloody hashbrowns. After I stopped laughing and explained why it was so funny to a very confused Alex, I learned that hashbrowns aren’t a thing in Spain. As these are the exact cliché breakfast triangles that one may obtain in the UK in the frozen aisle, I expect that some local expat-targeting shop stocks them and the restaurant had decided to give them a try on the menu.

All in all I had an excellent time with my new Spanish friend, and I learned a lot. I had a great time wandering around Alicante on my own prior to this (walking 35km in two days), and very much enjoyed the sun. Alicante was a wonderful place to spend a couple of days, and I hope that I can return in the future to see more (with a camera, and maybe even a rental car).