I’ve heard from friends that using sleep-tracking apps can be quite good, as they wake you up at optimal times (e.g. not during REM sleep) so that you feel nice and refreshed. I find that I have to regulate my sleep fairly carefully. Given the chance, I seem quite capable of sleeping 10+ hours a night. When left to my own devices I seem to naturally shift to a ~28 hour day, sleeping for 10 hours followed by 18 hours of wakefulness. Every time I don’t set an alarm, I will sleep far in excess of the recommended 8 hours. I’ll then not be able to sleep at a reasonable time because my body immediately enters this shifted sleep pattern, meaning that I then have to start setting alarms at a “normal” time to try and force back the sleeping patterns. If I use alarms to ensure I don’t sleep to access, I get to sleep reasonably well. It generally takes about 20 minutes, but it happens. My problem is staying asleep. I’m a very light sleeper, with very little noise being required to wake me up. I also wake up for no apparent reason, generally up to 10 times a night. I generally get back to sleep fairly easily, unless it’s a noise-induced wake up. I sleep with ear plugs to reduce on sound-induced waking up, but I find that I quite often take these out in my sleep (thankfully placing them in my pocket where they’re easy to find again). Because of all these issues, I decided that I would play with a sleep tracker on my Android phone.

The first app I came across is one called “Sleep”. This app comes with a 14 day free trial, costing £2.99 to continue after this. I found the app fairly easy to use, and set it up for an 8:00 wake up time, going to bed at around midnight. I decided that to ensure it picked up my movements, I would try and exaggerate my movements when rolling over during my random wake-ups. This is the graph of my sleep: 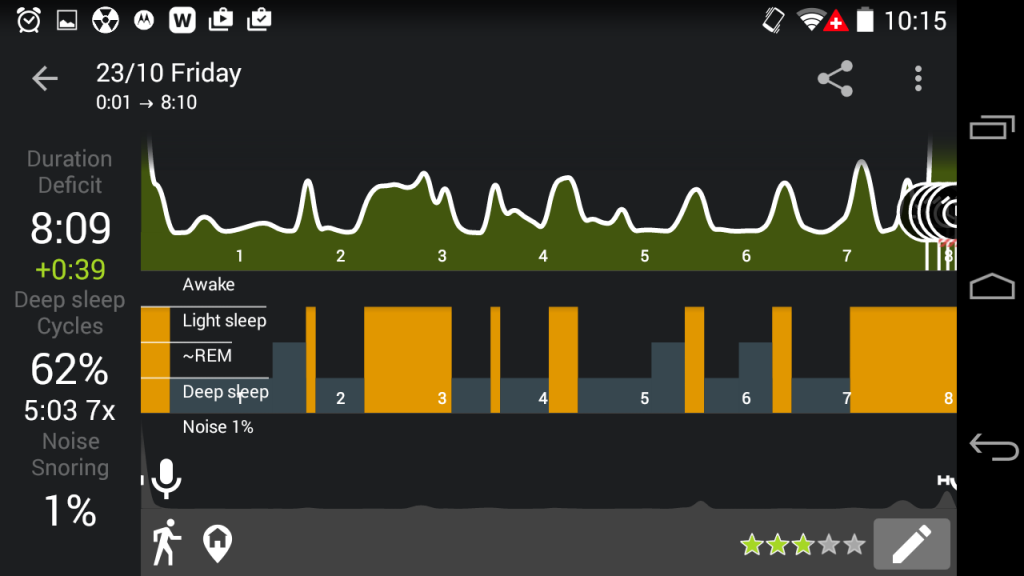 Interestingly, the app seems to have considered these periods of being awake as “light sleep” (including my time spent spamming the snooze alarm). The noise tracker doesn’t seem to have picked up on the various drunk revelers shouting outside my window, either. I find that during my periods of wakefulness I often remember my dreams, but that the memory fades fast. This suggests that I’m either waking up during REM sleep, or immediately after it. The graph in the app seems to suggest that this might actually be the case, which is interesting. The app asks me to rate my sleep. I gave it 3 stars in this case- I was groggy, but not too terribly. What seems off here is that the app records me as having slept for 8:09 hours. I put in an alarm time of 8:00, and the app decided to wake me up a bit earlier based on how I was sleeping (it aims to avoid waking during REM), meaning I slept for maybe 7:45 hours. However, it seems that the app records snooze button use in the complete count. I tend to have my snooze set to 5 minutes which isn’t enough time for me to get back to sleep, so it seems odd that this would be included in the calculation. The app tries to calculate “sleep debt” based on if you over/under sleep, and it seems that recording snooze time would just mess with this. Another complaint about the system is it’s inability to deal with swipes. 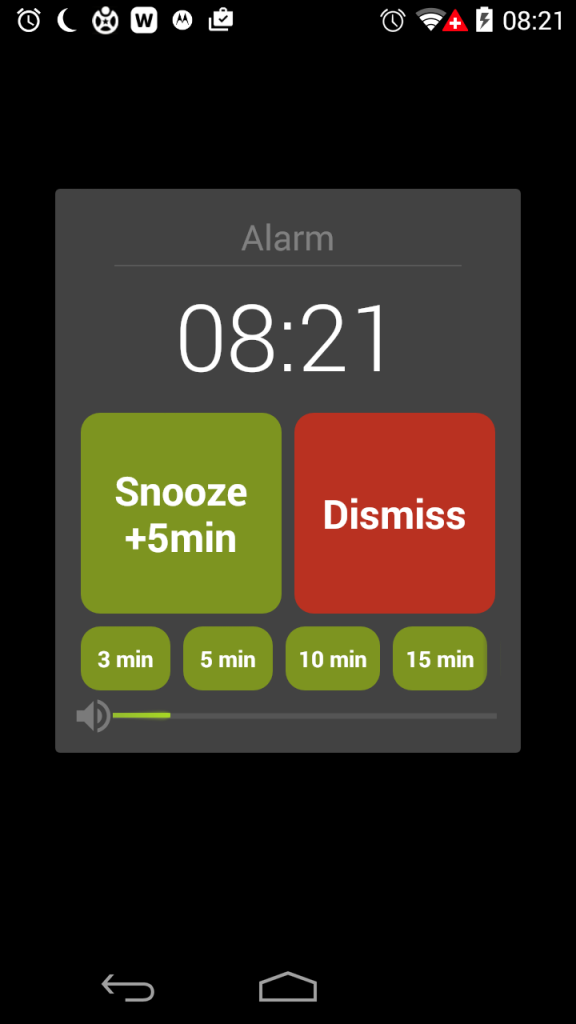 Above is the snooze screen. As default, it appears that the alarm is super quiet (due to my being a light sleeper and having already take my ear-plugs out it was enough to wake me). The volume bar looks like a slider. Apparently it is not. You need to repeatedly tap the bar to progress the volume, which is not pleasant for barely awake Vic. This can also only been done while the alarm is running. I like to get the alarm switched off ASAP as it is annoying, and so this made changing the volume even more frustrating. I tried to use the hardware-based volume buttons on my phone, but it seems that these just dismiss the alarm all together. This is especially annoying, as it’s not uncommon for me to accidentally press them when trying to pick the phone up whilst barely awake.

For the next night I decided to move normally, and see how well the phone tracked me then. 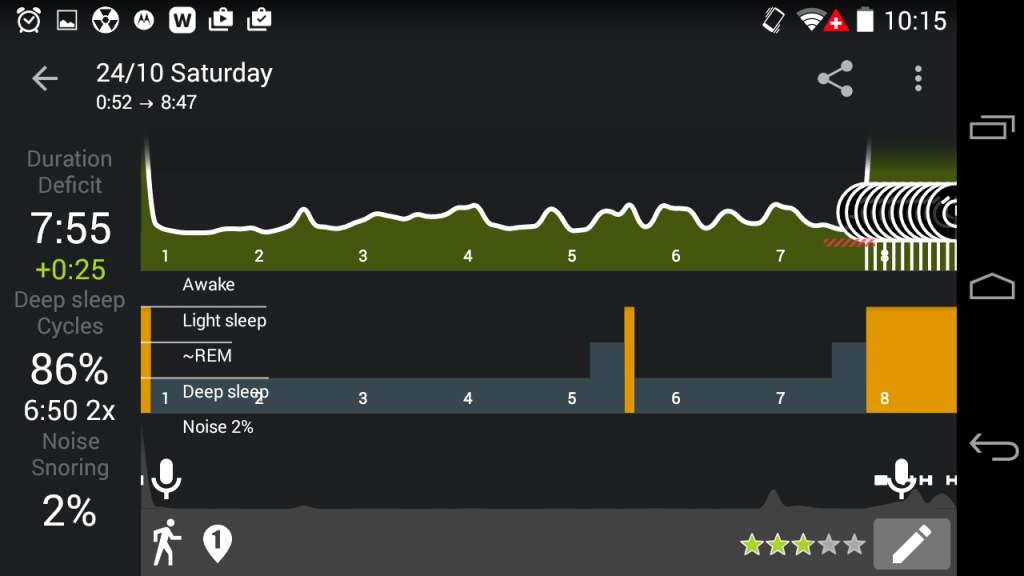 As it turns out, not so well. The bumps of me being awake are still present on the graph, but the app doesn’t seem to have made attempts at interpreting them. During one of these periods of being awake I sat up and drank from my trusty bed-side water bottle, and it didn’t seem to record that in movement or sound. My bed has a very solid frame, and a quite solid mattress. Perhaps these are so solid that movements aren’t transferred to my phone next to my pillow well enough for it to pick them up? I looked through the settings of the app to see if it was possible to change the sensitivities, but it did not appear to be possible. So, I decided to test out another app.

Last night I tried out SleepBot. This app is free, and appears to be a rip-off of Sleep. A lot of the interfaces and options are the same as seen in Sleep, meaning that I picked up how to use it fairly easily. I went to bed just short of midnight, and set an alarm for 8am. Due to the clocks changing last night this led to 9 hours sleep, which was intentional as I was feeling pretty tired. The app gives details of how long until an alarm goes off, and this correctly told me it would be a bit over 9 hours (meaning that the app was aware of the impending change, which was nice). I decided to once again sleep normally; here’s my graph: 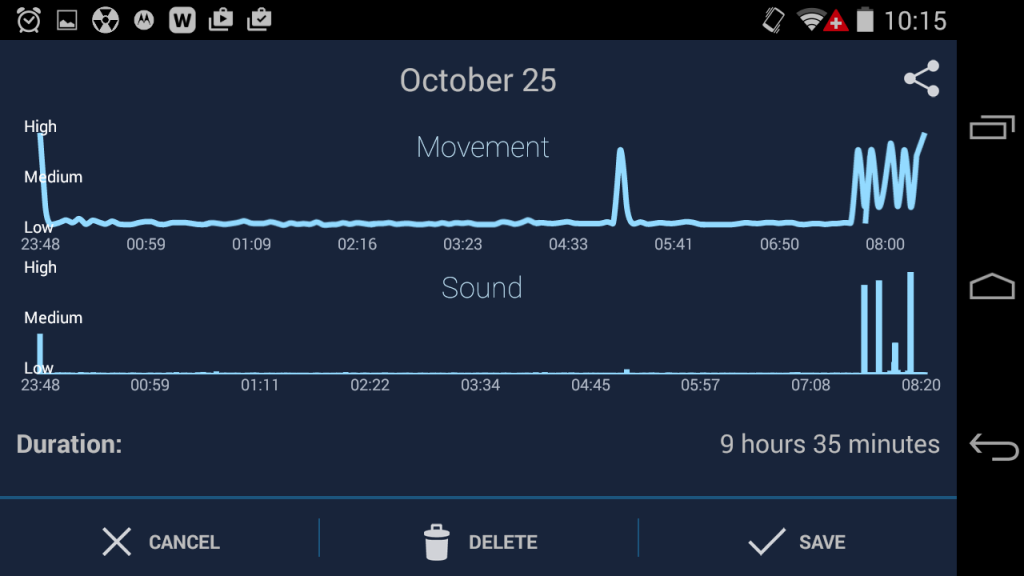 I had told the app to record any noises, but if it did then I cannot find a way to access them. It seems that in general, this app did a worse job of recording movements than Sleep did. The only movement it seemed to catch was me having an extended session of “hunt the earplugs” after a group of drunk students decided that 5am was the perfect time for choir practice outside my window. I did hope that the phone had picked up and recorded this noise, but I can’t find a way to playback what it may or may not have recorded. The line graph doesn’t seem to really have any significant bumps other than this, and I know that I was awake several times during the night. This app also seems to include snooze time in total times, probably due to it copying Sleep. Annoyingly I forgot to change the default snooze time from 10 minutes to 5, and so I ended up snoozing for quite a while. Sleepy Vic seems to go for a certain number of snoozes rather than a duration, so the 5 minutes alarm works much better for me. I also found that by the 10 minute mark I am just dozing off again, and so am annoyed to be woken up. I still gave this sleep a 4 star rating however, as I actually felt pretty good when I woke up (probably due to the 9 hour sleep). I find that I do feel the most refreshed after sleeping around this amount of time, but it does cause issues with getting to sleep the night after. Interestingly, I found that this app does seem to use movement as an indicator in deciding when to wake you up. I naturally woke up, and as it was light out I decided to check what time it was (if my earplugs remain in I will sometimes sleep through alarms so I like to check). I discovered that it was 7:45. This was within the “acceptable” waking up time-frame, and it seems that the movement of me picking up the phone was enough for it to decide I’m sleeping lightly enough to be worth waking. This was quite confusing to sleepy Vic unfortunately.

There are other apps available on the store (both free and paid), but I suspect that all apps will have trouble tracking my movement. In the past I’ve considered buying a Fitbit to track my activity, and I’ve noticed that these apps will link with one. This seems that it would give a much better estimate of sleeping behaviors, and so I might finally take the plunge and buy one!