Published by Vic Harkness on September 24, 2015

I wanted to take a trip to The Netherlands while I was in Belgium, and Sam decided that he’d take a look at places close to the border that would be easy to visit. During this, he came across Baarle-Hertog & Baarle-Nassau. This town stuck out because of how it appeared on the map: 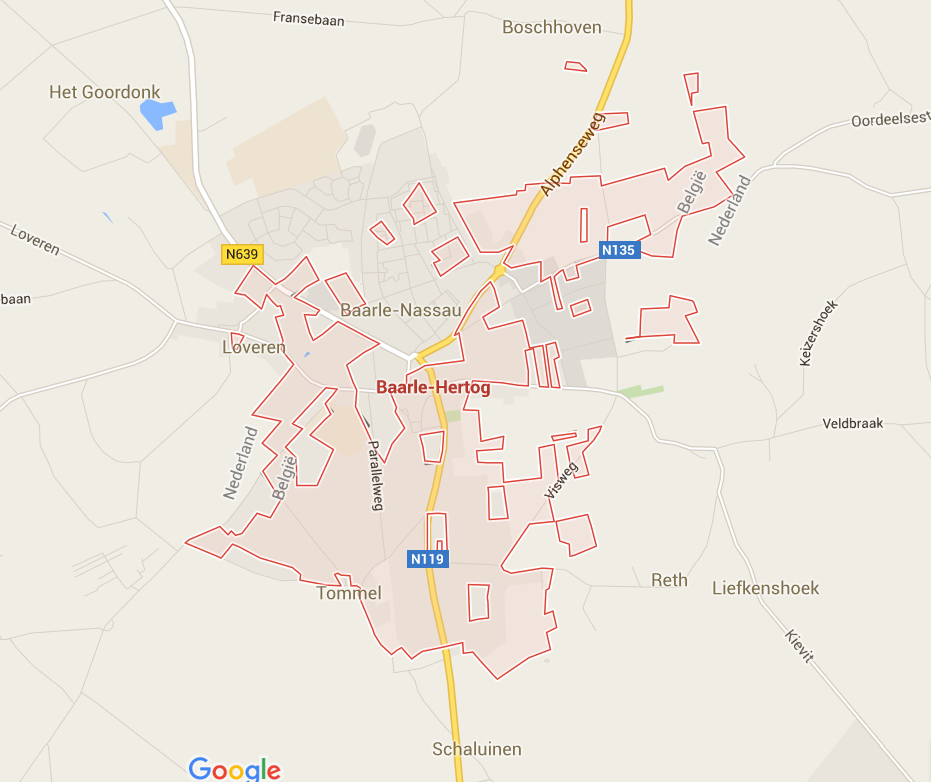 The Belgian parts (Baarle-Hertog) are highlighted in red, and the surrounding area is part of The Netherlands. The borders within the city are marked with white pluses painted on the pavements, and metal studs in the road. 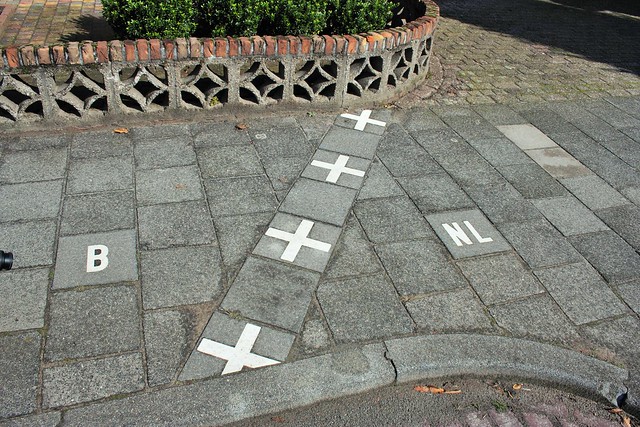 These can be seen allover the town. There are also some houses which are divided by the borders, but I assume that people don’t bother drawing lines all over their carpets. The nationality of a household is determined by which side the front door is on (a rule known as voordeurregel, literally “front door rule”). In the case of one house in one small enclave, the door has a number for each country: 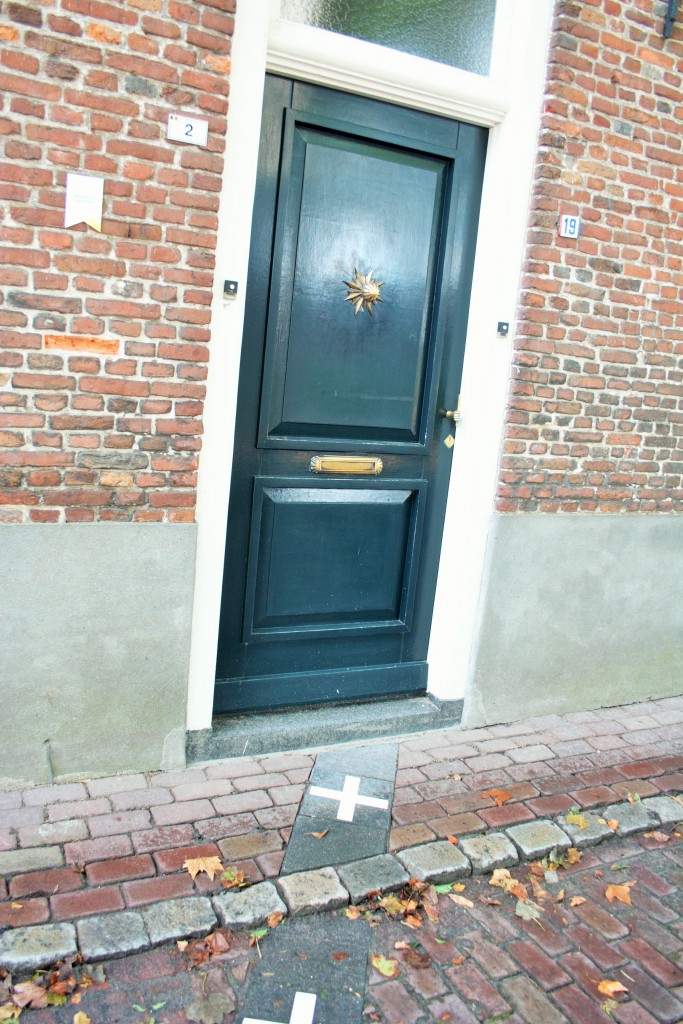 The house in the above picture was one of only two in a little piece of Belgium known as known as Loveren. 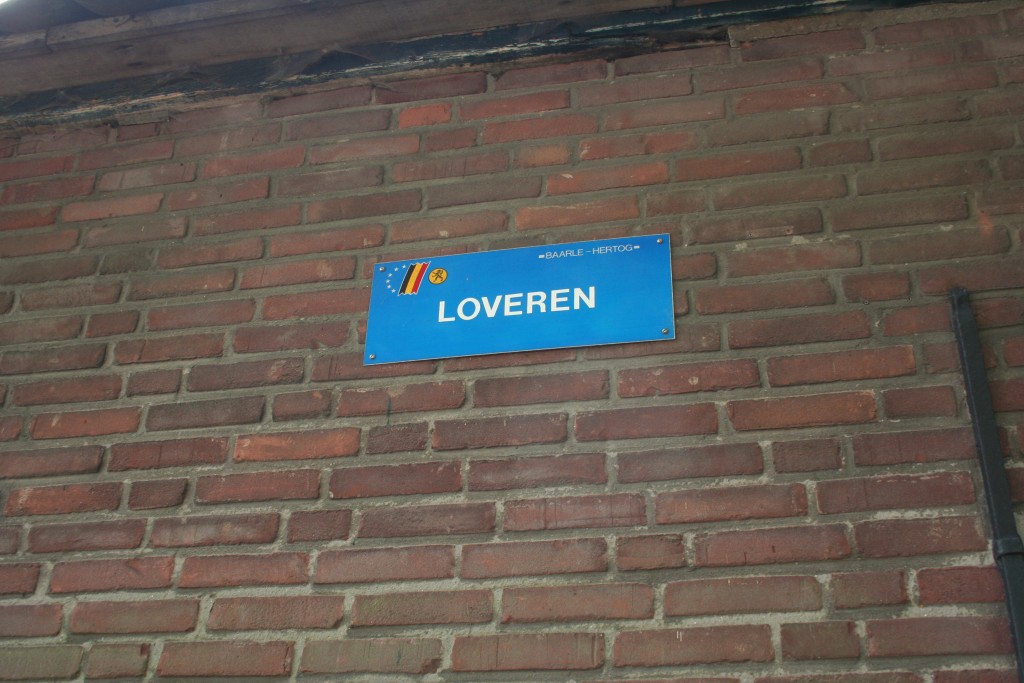 The use of flags to denote which country you were stood in seemed to be quite common. When driving in to the town we had noticed that many houses had small posts with flags painted on them at the start of their driveways.

In the small enclave of Loveren, it was interesting to see what I am assuming is an old-style doorbell. 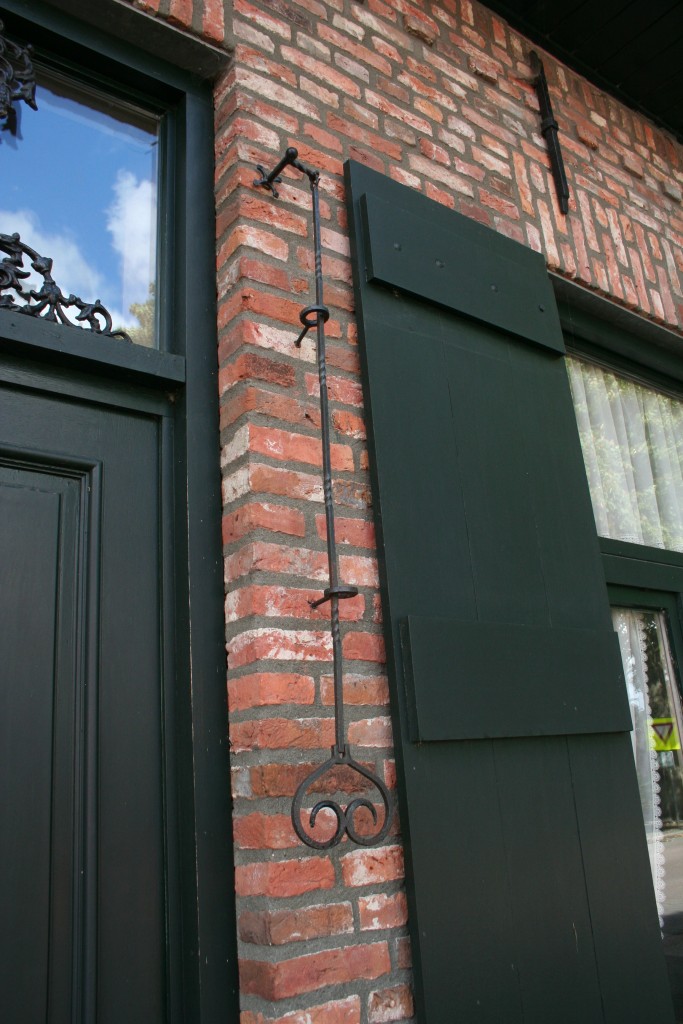 I’d seen these while on the horse tour in Bruges, but hadn’t had a chance to look at them closely. From what I can tell, at the top of the pole the metal enters the house. By pulling the pole up and down the metal entering the house would be rotated, I assume ringing a bell on the inside. I did not test this theory, as I assume the tenants of the house would not be best pleased.

The unusual division of the town apparently began back in the 12th Century, due to sales of land between the Lords of Breda and the Dukes of Brabant. In general, the agricultural parts became constituents of Brabant, and the others part of Breda. The suffixes Hertog and Nassau in the town names come from “the Hertog of Brabant”, and “House of Nassau” (which the Barony of Breda was in possession of). After the Treaty of London of 1839, the odd borders became a division of country rather than simply ownership. This was followed up in 1843 by the Treaty of Maastricht, in which a formal border between Belgium and The Netherlands was decided, in part based on where residents of each country were currently living (as may well have contributed to the borders of Baarle-Hertog/Baarle-Nassau). In 1995 the border was finalized to include a previously neutral section of grassland.

The divide has led to large amounts of tourism in the area, and not simply for the novelty. As the areas of the town are technically separate countries, different laws apply. For example laws on the sales of fireworks are more lenient in Belgium than in The Netherlands, leading to Dutch tourists traveling to Baarle-Hertog to buy them in advance of the new year. The division of some buildings by border-lines has caused minor issues however. It used to be the case that the law in The Netherlands dictated that restaurants shut at an hour that happened to be earlier than the time specified by the law in Belgium. Because of this, diners in cross-border restaurants would simply have to change to a table on the Belgian side at a certain time. The unusual border has also led to smuggling taking place. After the Second World War, people smuggled butter from The Netherlands in to Belgium. In modern times, fireworks are smuggled in the aforementioned way.

Interestingly, there seems to be quite a bit of duplication in the town due to the divide. Both sides have their own mayor (burgermeester), along with its own council. Each has its own police station, and it’s own church (although this may be due to different religious denominations. At the time of the split, the Belgians were generally Catholics whereas the Dutch were mainly Protestants). There is some co-operation between the two sides however, with the creation of a joint council to look after things like electricity, water and gas supplies, highway maintenance and refuse collection. A joint cultural center/library has been set up in a building that intersects the border line, but has two entrances (one in each country).

It was an interesting trip, although I think that there would be more to see/learn if we had gone during the traditional tourist season!