A trip to Bruges

Published by Vic Harkness on September 20, 2015

I went to Bruges yesterday, as I’m currently visiting my partner (he’s working in Belgium for 2 months). I went there a bit over a month ago too, but didn’t do anything with the pictures due to BT’s refusal to fix the internet in my flat. Thankfully I’ll be moving in a week so I may post some of those pictures in the future!

The name of Bruges is a small cause for confusion I’ve found. In English and French, we say Bruges. In Dutch, they say Brugge. I’ve noticed that Facebook tagging seems to automatically equate the two. Google seems to use the usage of Bruges vs. Brugge to discern what language webpages the user may be interested in.

Walking in to the city, we saw what we assume is a new art installation (in that I don’t recall seeing it here a month ago). I tried to implement some of what I had learned in my recent photography lesson, going for the “unusual angle”. 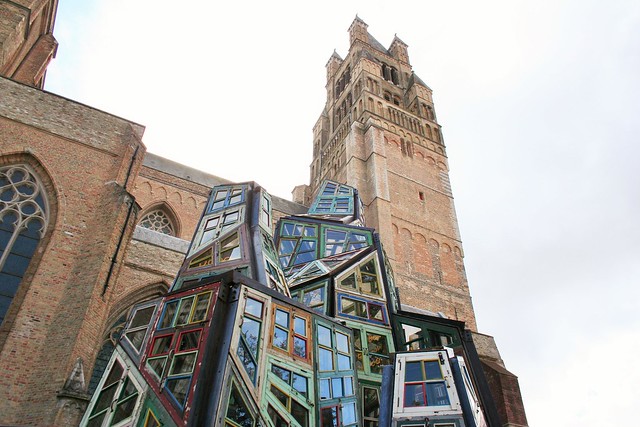 I’m not entirely sure what the building is in the background, unfortunately! The full display can be seen here: 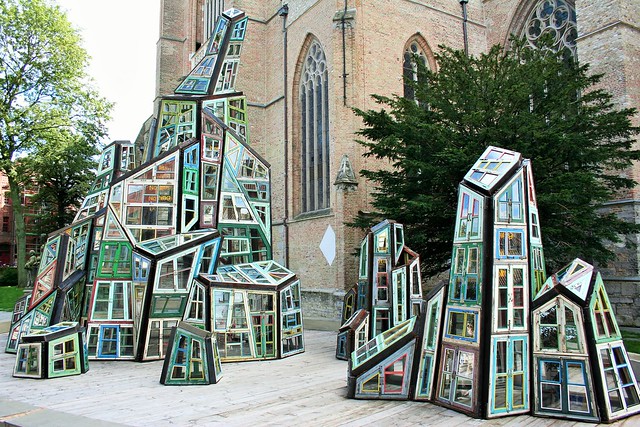 I think the installation is vaguely based off of the shape of the building behind it (in that it has two “towers”. When we were taking photos of the installation I could hear what sounded very much like a young peregrine falcon calling from the top of the towers. It’s not uncommon for peregrines to nest on tall buildings in cities, but unfortunately we couldn’t see exactly where it was from the ground.

While walking in to town we also encountered a Predator. 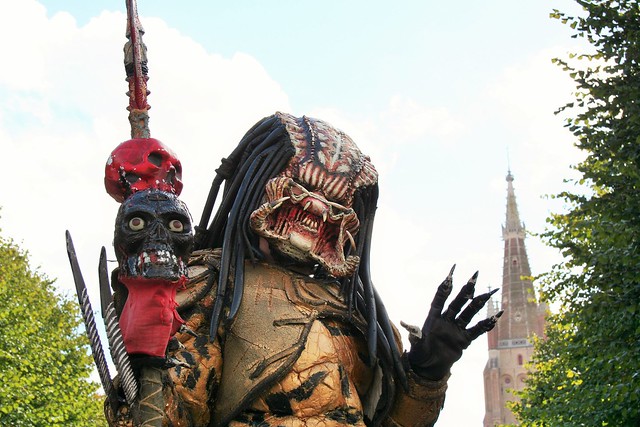 After taking pictures he pointed to the coin bucket in front of him- it seemed to mainly be 1 and 2 Euro pieces in it, so I suppose he makes a decent living doing this! We also saw an Alien later in the day, but his costume was of quite lower quality. He also had his hood off and he appeared to be at least a little bit drunk.

Eventually, we reached the City Center, AKA the Grote Markt. I didn’t take too many pictures here as 1. I took a fair few pictures last time I visited, and 2. It seemed that the area was being set up for some sort of festival with a large stage at one end and lots of small huts in the area. 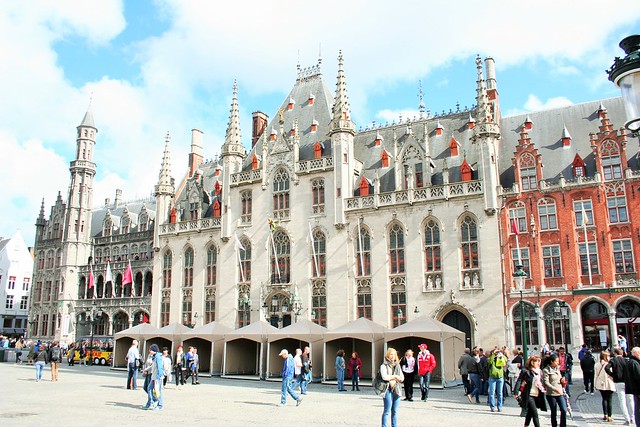 It was decided that we would get a horse and carriage tour of the city. The tour cost 44 Euros (for a maximum of 4 people), and lasted about 30 minutes (including a 5 minute break part way round for the horse to have some water). 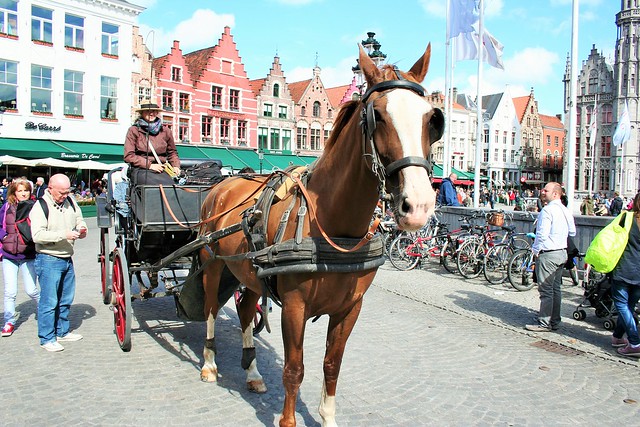 The horse tour moved quite fast, and the tour guide gave us a brief overview of the points of interest around the city during the ride. We decided that we would walk around the route afterwards so that we could stop and look at what we’d seen.

On the walk round we spotted where the boat tours leave from. We’d been interested in doing a boat tour on our last trip, but poor weather had put us off. On this trip we noticed how tightly packed in people are for the boat tour, and so elected not to go on one. 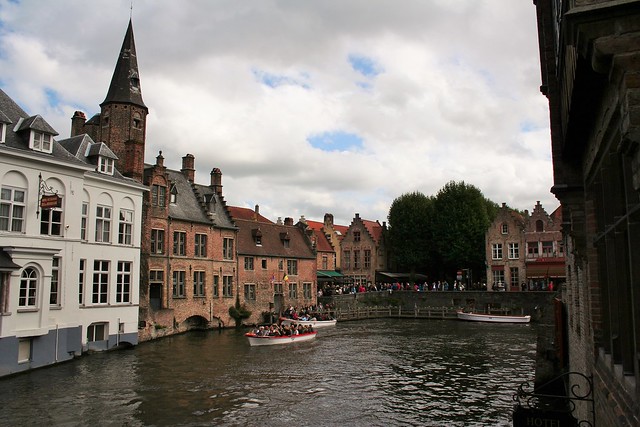 I kept an eye out for more “unusual angle” photo opportunities, and took a picture of an old wooden building that I think turned out well. 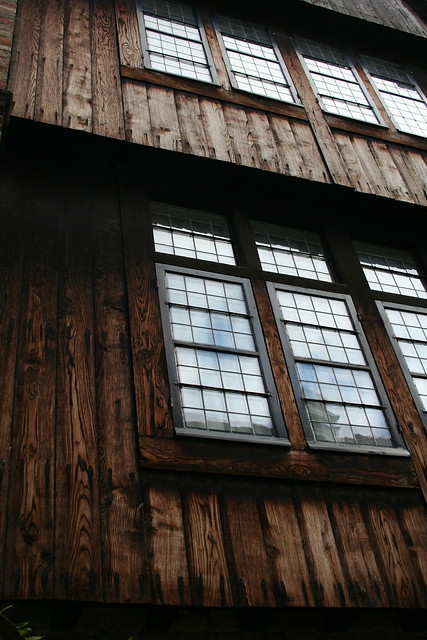 While walking around Bruges, we noticed that quite a few shops sell lace. Apparently Flanders is quite famous for its linens, and Bruges is the term used to describe “scrolling” lace. On our walk we found a street map that was made of lace, braced over a frame. 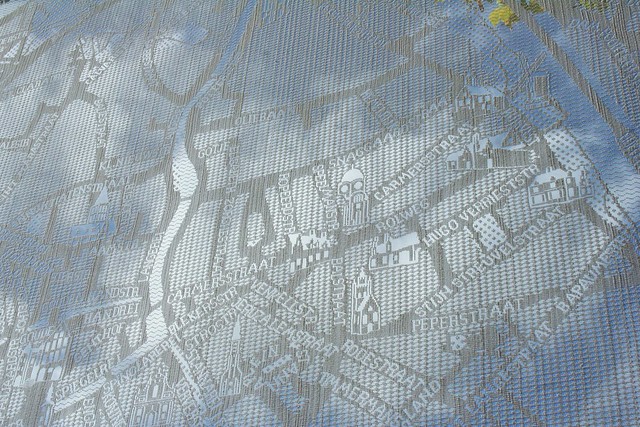 It was quite hard to get a decent picture of the map, what with lace being quite pale with large empty patches. There were also buildings on either side of it, so I had to once again take the “unusual angles” approach. The map was to the side of me as I took the picture of this scene: 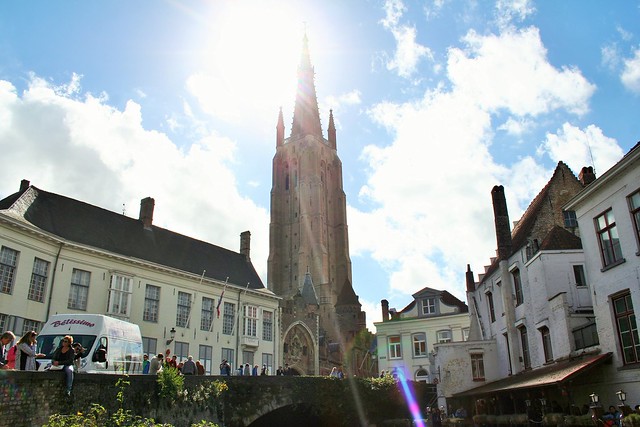 Unfortunately at the point in time we were stood here the sun was quite high/bright, and was right behind Onze Lieve Vrouwekerk (the big pointy tower in the background), which translates as Church of Our Lady.

Near here was the place where the horse cart had stopped for a break during the horse tour. While we were there on foot, I spotted that the fountain featuring horses that had previously been deactivated could be activated via a key-openeing panel in the side. The horse heads in the statue were designed to be able to hold a bucket, so that the bucket could be filled with water for a horse. 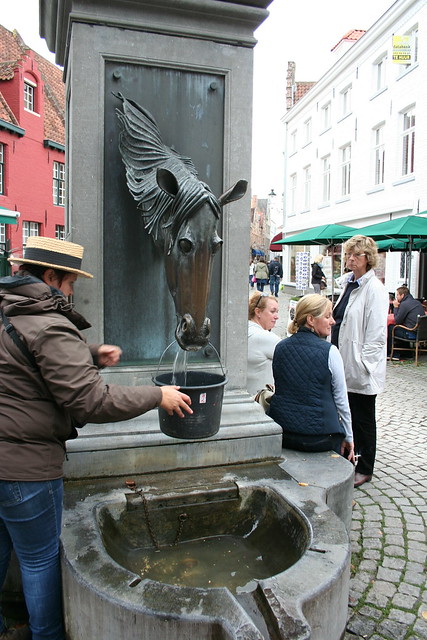 I guess that based on this, Bruges has a long history of horses in this area (although I’m guessing not horse tours of the city). In this area there were a large amount of swans/ducks, and it seemed that they’re fed in the area. 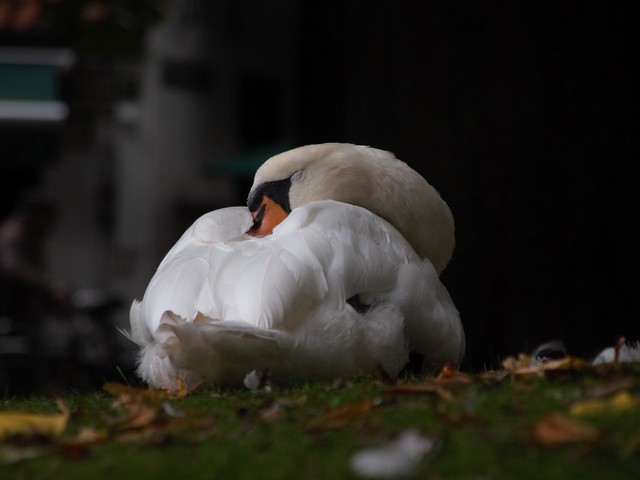 A short walk from here is the Minnewater, the Lake of Love. Where the canals reach the lake is a bridge. There is a local legend that if you walk over the bridge with your partner, you will experience eternal love. Apparently this stems from the story of Minna, and her forbidden warrior love Stromberg.

On the Minnewater is a nice looking building. A quick Google search has not yielded a name for this building, unfortunately. 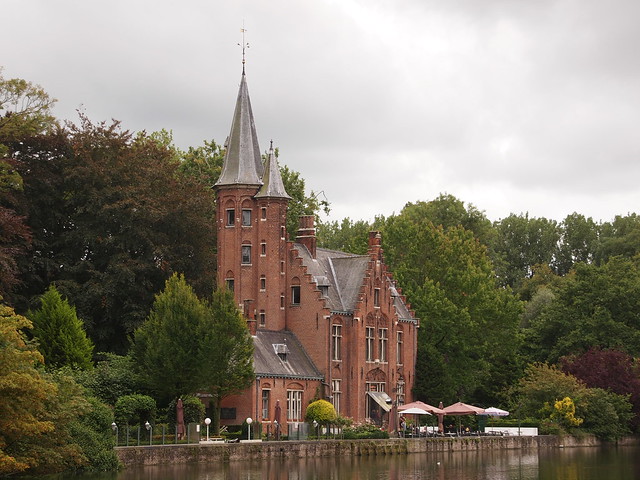 When walking down a small unremarkable street nearby, we came across what appeared to be a miniature Popemobile. It had some pale, angel decals on the side, and a small solar-powered waving Pope on the dashboard. 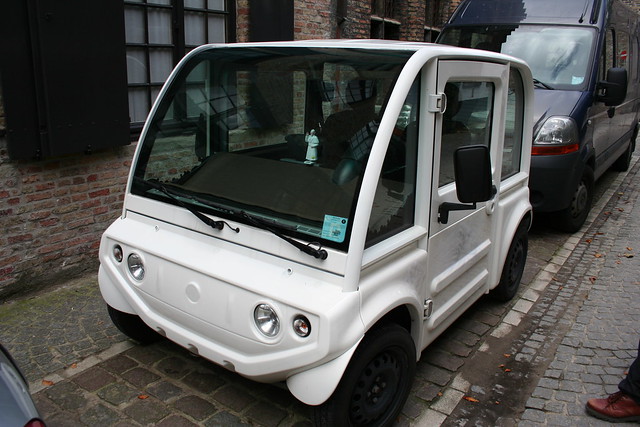 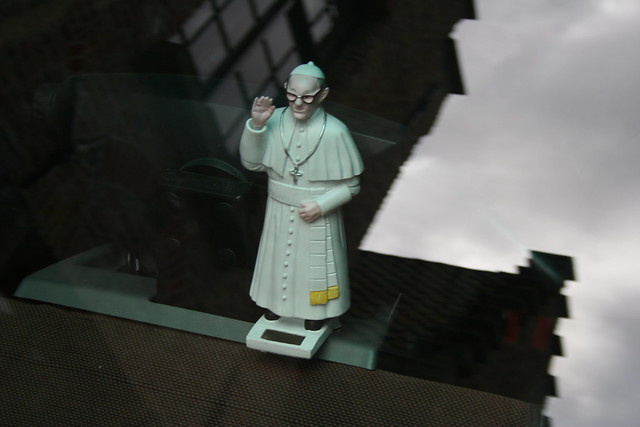 Near here were the God Houses (Godshuis) St Jozef. These ones were built in the 17th Century. 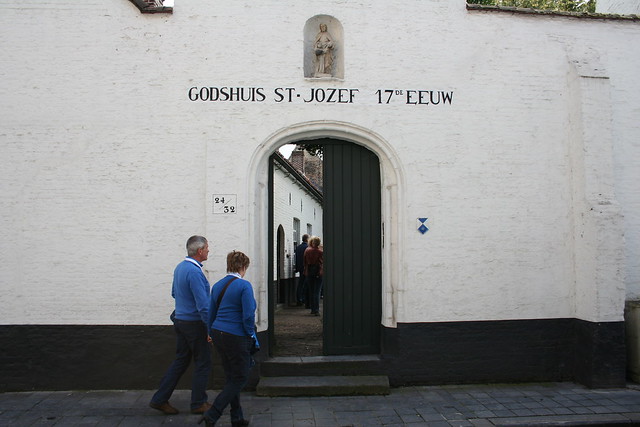 According to the guide on our earlier tour, God Houses were built as a gift from the rich to the poor. To live in them, the poor had to agree to pray three times a day for the rich owners so that they would have a good place in heaven. 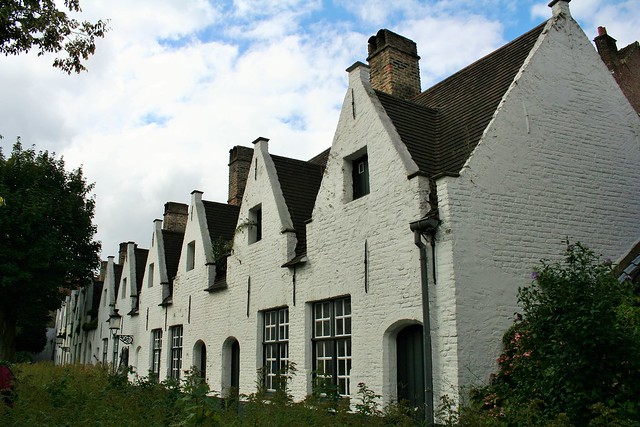 The God Houses were in a small walled complex, with a large garden in the center. It was interesting to see that people still live in these houses, even though walking tours come through there regularly. It seems that some of the residents are not too happy about this. 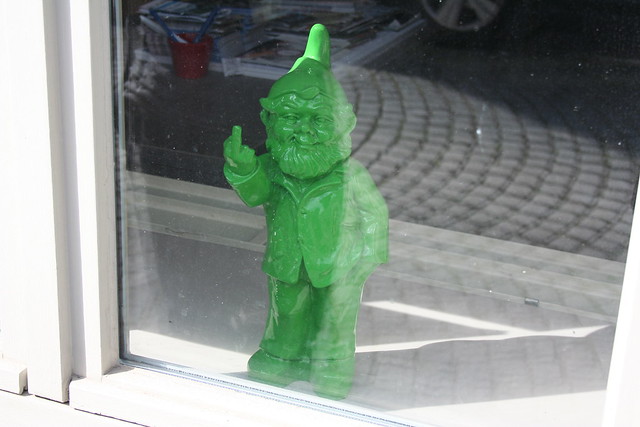 Another place we returned to on foot was what is apparently the narrowest street in Bruges. The horse cart tour did not go down this street for obvious reasons. 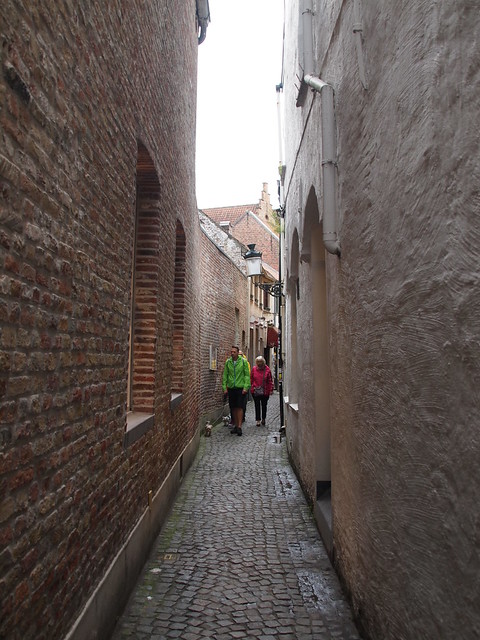 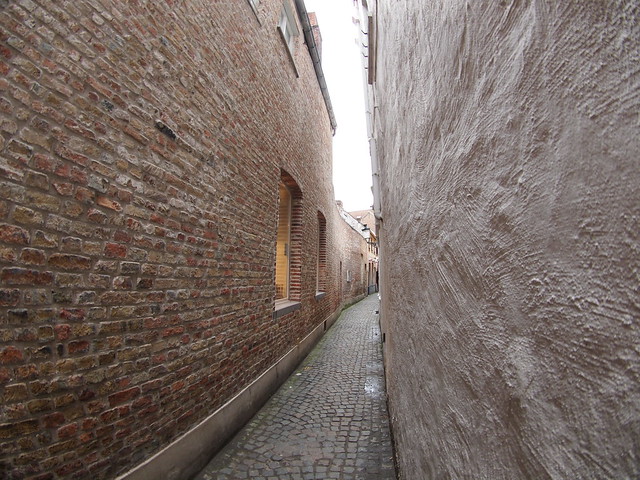 I’d say that it makes the street look even more tall/narrow! However, due to how busy the city was it was quite a pain to change my lens over. Because of this I left the fish-eye lens on our of laziness for the rest of the time in the town center, which did not make for the best photographs. 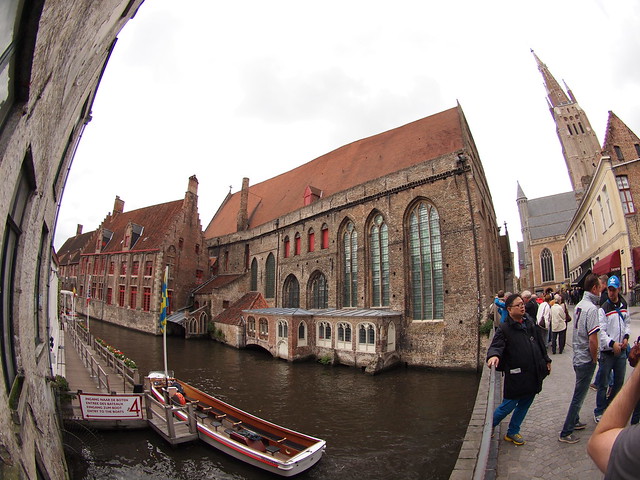 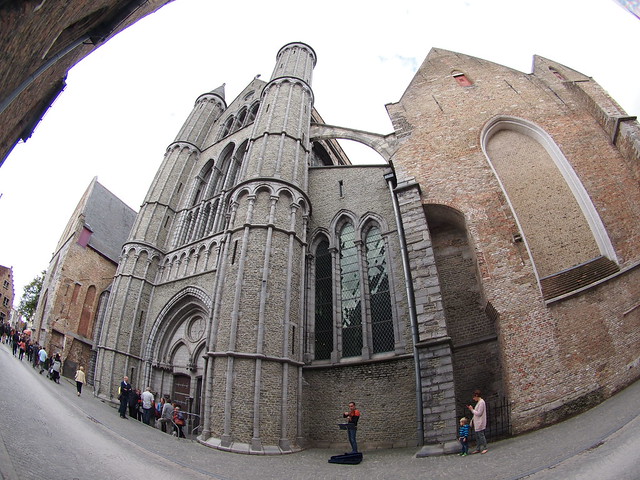 Again, we did not go inside.

All in all it was a nice day out, and I’d like to be able to go to Bruges again to visit inside the museums!