Aerial imaging of a Roman Villa near Aberystwyth using my UAV

A while back I attended a talk by Toby Driver from the Royal Commission on the Ancient and Historical Monuments of Wales on aerial photography for finding undiscovered ruins. In the talk he described how the Royal Commission charters flights over Wales in times of drought, and takes high-resolution photographs. These photos are then inspected, as during times of drought you can sometimes see the outlines of past establishments. This is because of things like a layer of rock (from a past wall) will cause crops to wither from drought at different rates to those growing over regular soil. A few years ago a settlement was noticed near Aberystwyth, which appears to be a Roman Villa. The BBC wrote an article about it’s initial discovery, which includes an aerial image which shows the outline of the villa’s yard in the parched crops. I found the talk to be very interesting, and discussed the possibility of being able to use my UAV to take some images.

Last week I was back in Aberystwyth for Graduation, and it was arranged for me to spend the day after my graduation at the Abermagwr Roman Villa dig-site. On previous digs, the entirety of the Villa has been excavated. For this dig, there are two trenches: one looking at a cross-section of the edge of the yard (including where the external wall was), and another looking at an area of yard. At the time I attended the dig site the dig is not very far along, and so there were no major features to see as of yet. However, I still conducted a few flights over the trenches (as well as assisting in the excavation). I did five flights in total, three of which I took videos during. I also took several pictures with both my DSLR and the GoPro mounted to the bottom of my UAV. The use of the GoPro has lead to my images having a very strong fish-eye lens effect. GIMP has a tool that allows for you to try and counter the effects of using a fish-eye lens, with mixed successes in my case. Overall I had a fun day out, and it was nice to get in some practice with flying the UAV!

The trenches seen in these pictures are the ones marked in red on this map of the site: 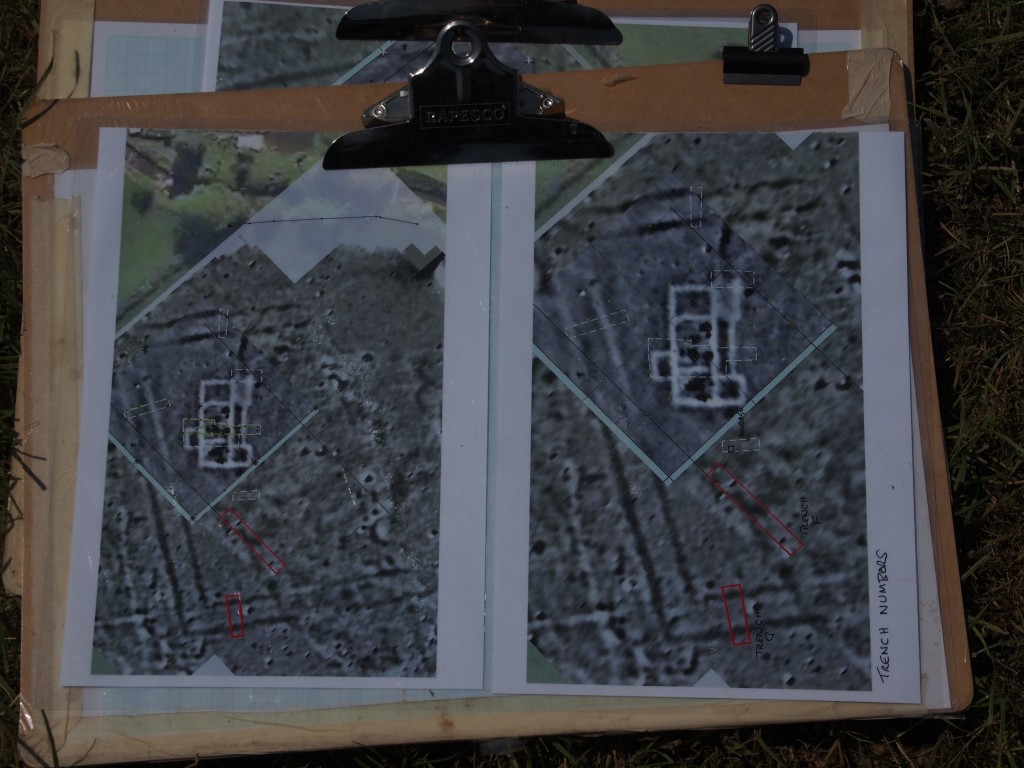 My base station for the day: 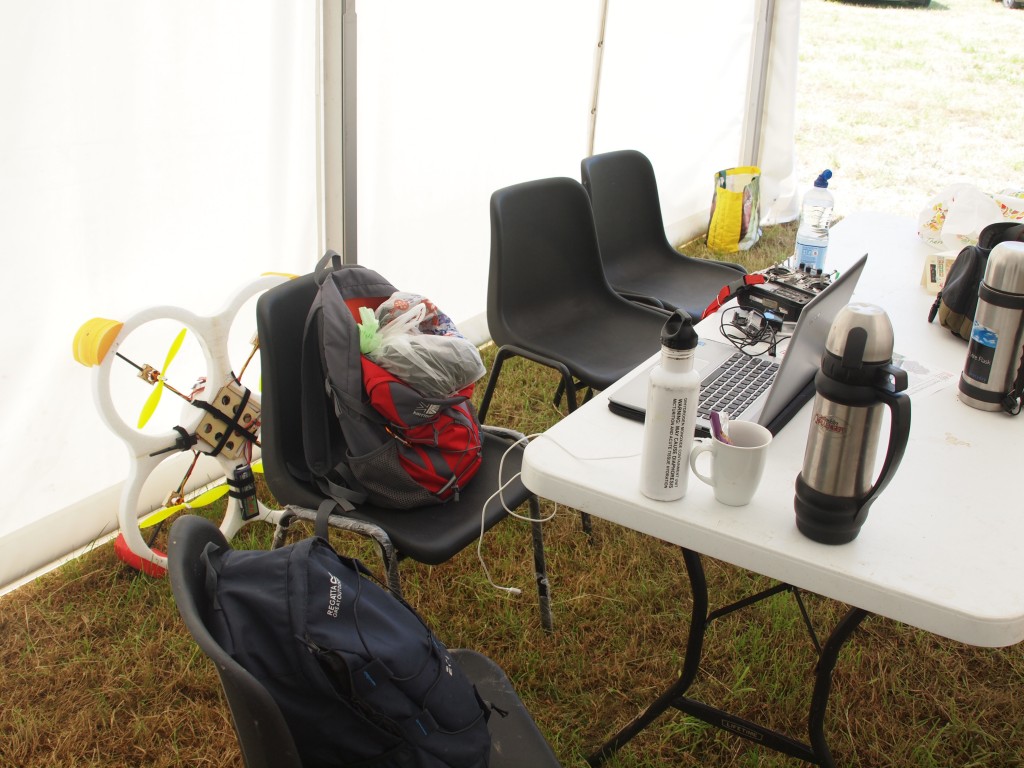 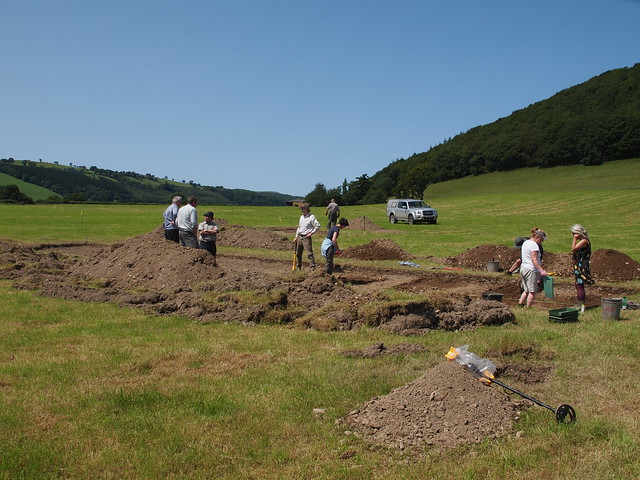 In this first video, the wind was quite high, and I think that the footage shows how much I was fighting it. However, it does show both trenches. The larger trench is the yard trench, and the smaller is the one intersecting the external yard wall. Due to the wind the UAV ended up flying a bit far from me, and so auto landed itself.

For my second video I attempted to fly lower over the trenches, but mis-estimated my position due to being stood quite far from the trenches. I also realised that I had been filming in lower quality on the previous video, so this and the next one were filmed in 4K.

Because of the issue with the previous video, I flew another flight while stood at the foot of the larger trench to ensure that I was flying over it. Part way through his flight, a bumblebee took great interest in the UAV. I guess that this is due to the bright colours on it, but I’m not really sure. The bee can be seen in the video as the large dot crossing the view several times. During this flight the wind speed suddenly picked up quite dramatically, resulting in the UAV being flipped over. As it was quite close to the ground already, this resulted in an upside down crash landing. The UAV took some very minor damage, which can be seen in a later picture.

Some of the aerial photos: 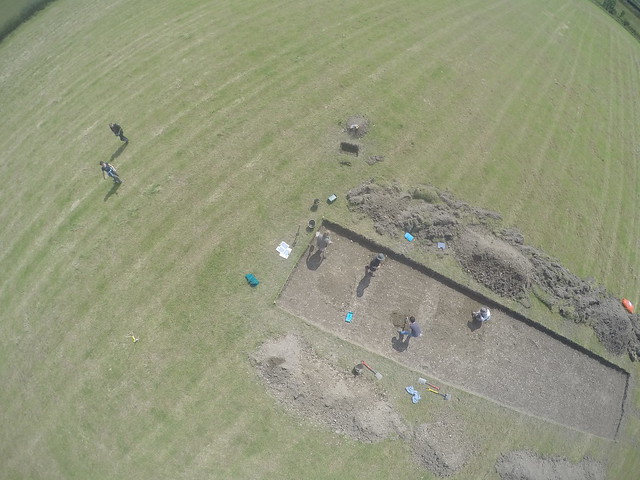 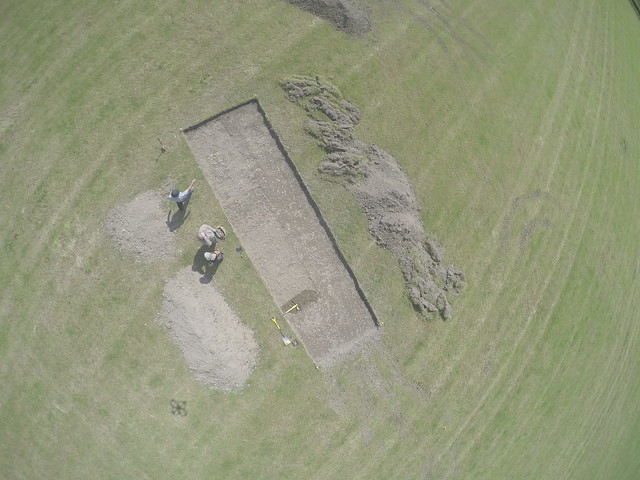 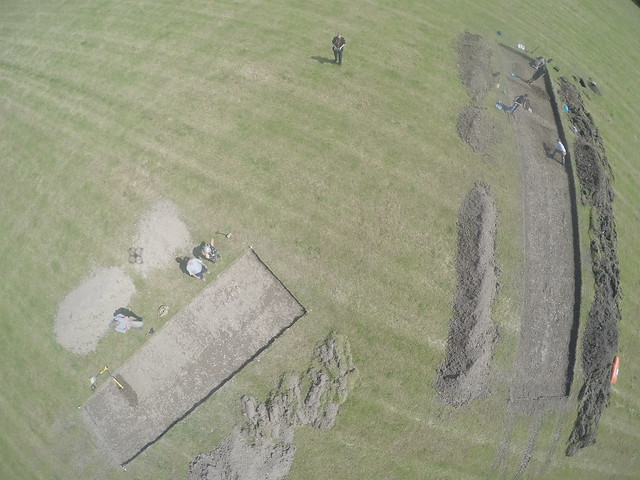 I did attempt to “fix” one of the above images using GIMP, with a debatable degree of success due to my lack of expertise: 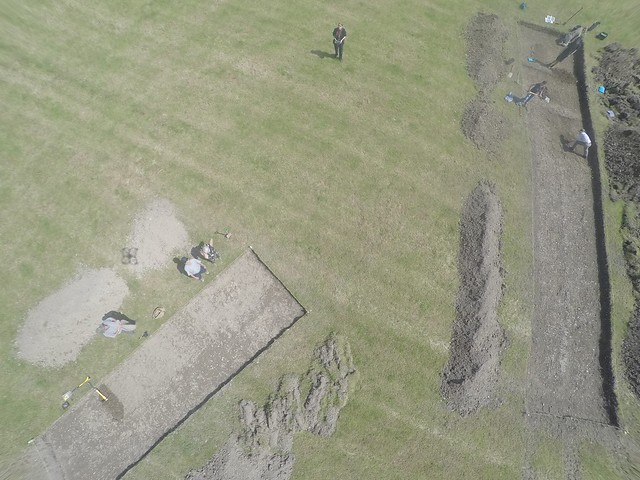 As I was at the site at a fairly early point in the dig, only a few things had been found so far.
Some pieces of glazed pottery: 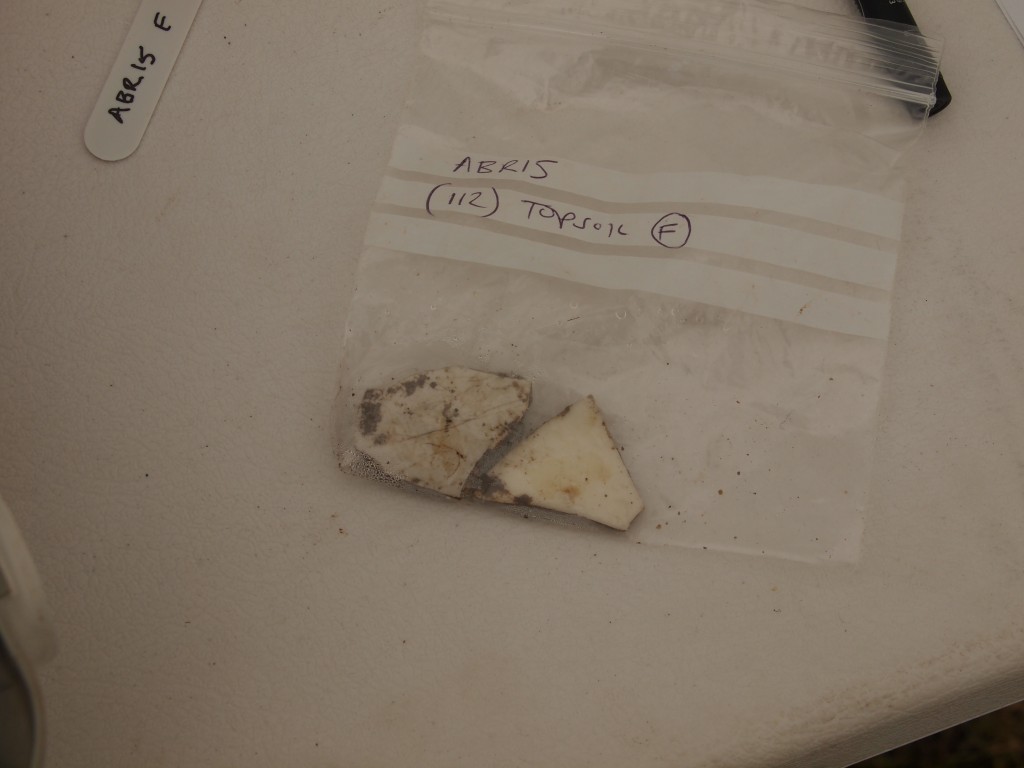 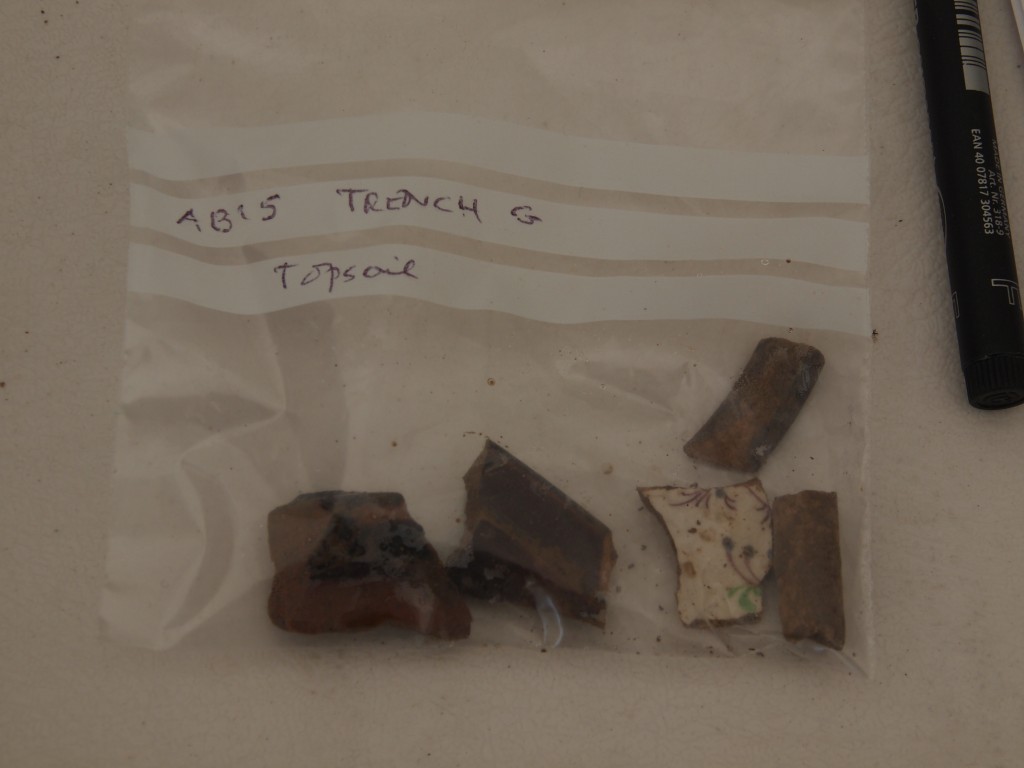 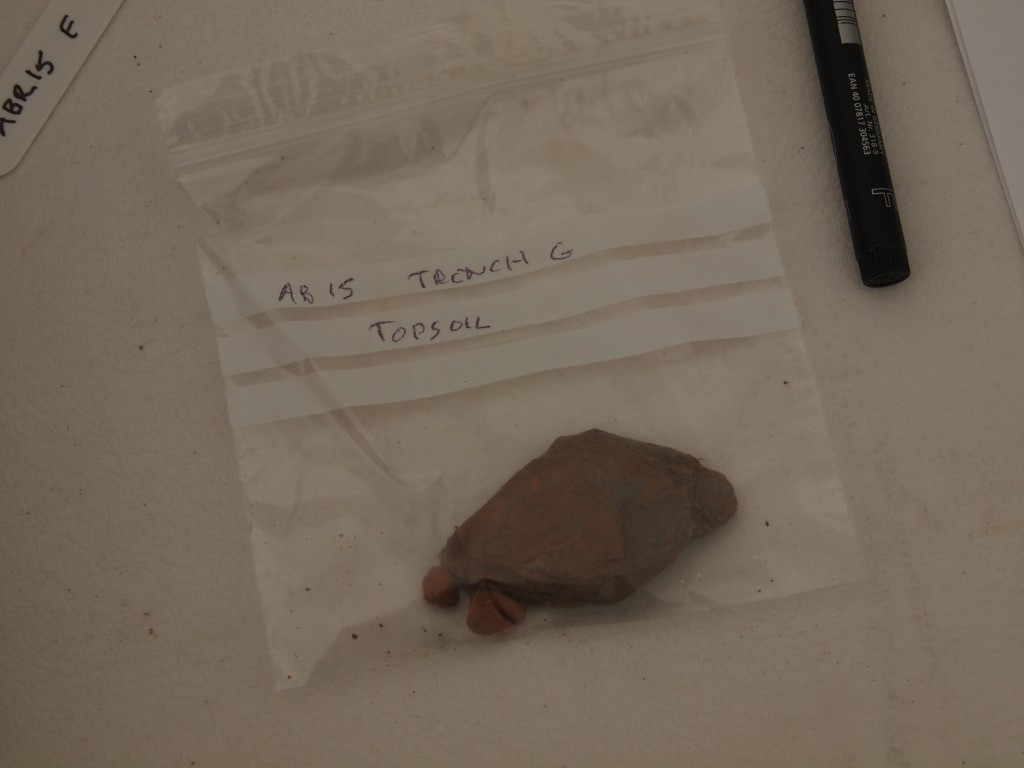 What appeared to be some sort of small weight: 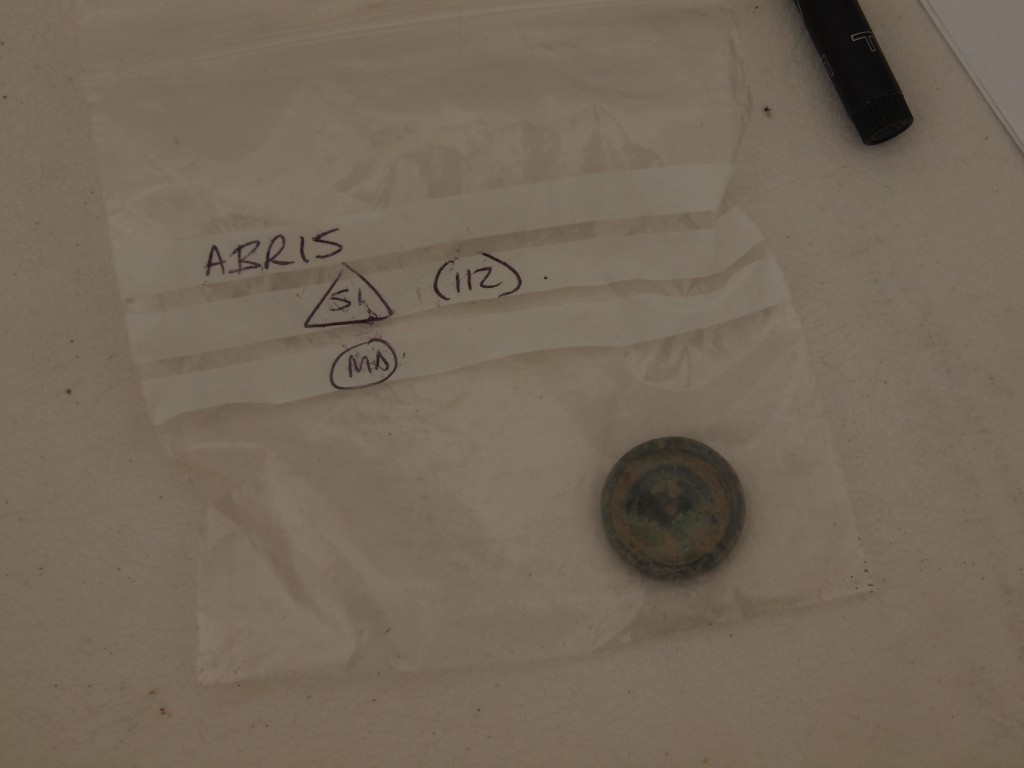 Progress on the dig site can be followed via the project’s Facebook Group.

And finally, the damage to my UAV: 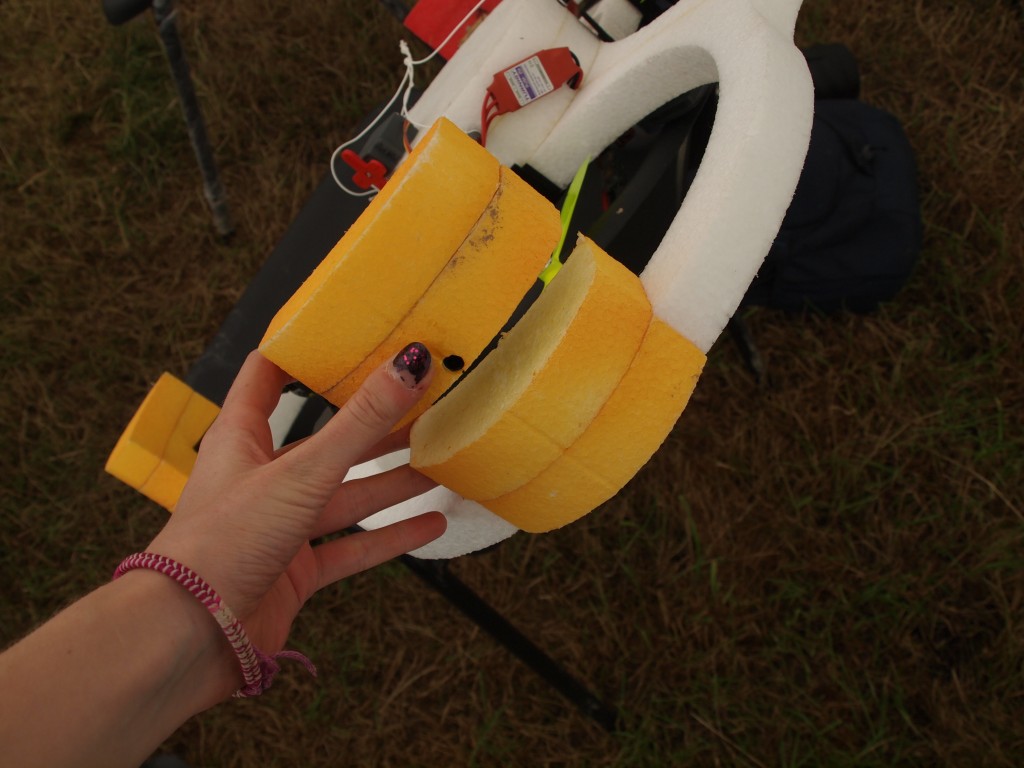 Thankfully, this is just a matter of gluing the foot back together!