Leveling a Diablo 3 character to max level in Hardcore mode

Having handed in my dissertation, I found myself with a lot of free time. I decided to play some Hardcore mode this season, and found it to be a pretty enjoyable experience! I’ve been playing a Witch Doctor already this season, and so decided to go with a Witch Doctor again. I found in regular play that WD pets are pretty good at holding agro away from me, which I figured would be invaluable in HC. I also wanted a ranged character for obvious reasons. I leveled solo for the entirety of the process (someone joined and immediately left around the 40s), and it took me a little short of 16 hours to go from level 1-70. I ran through the campaign once, which got me to around level 50. I then began running bounties. I did try some rifts, but found them quite tedious to do solo. I’m not sure what the most efficient method of gaining experience in HC would be, but I found my method to be quite enjoyable. That said, I did watch a fair bit of Netflix on my second monitor during the earlier leveling. From the start I played on normal difficulty, but around level 10 I moved to hard. I played on hard up until 69, at which point my health started dropping lower than I would have liked. The build I had at the time of hitting 70 can be seen here: 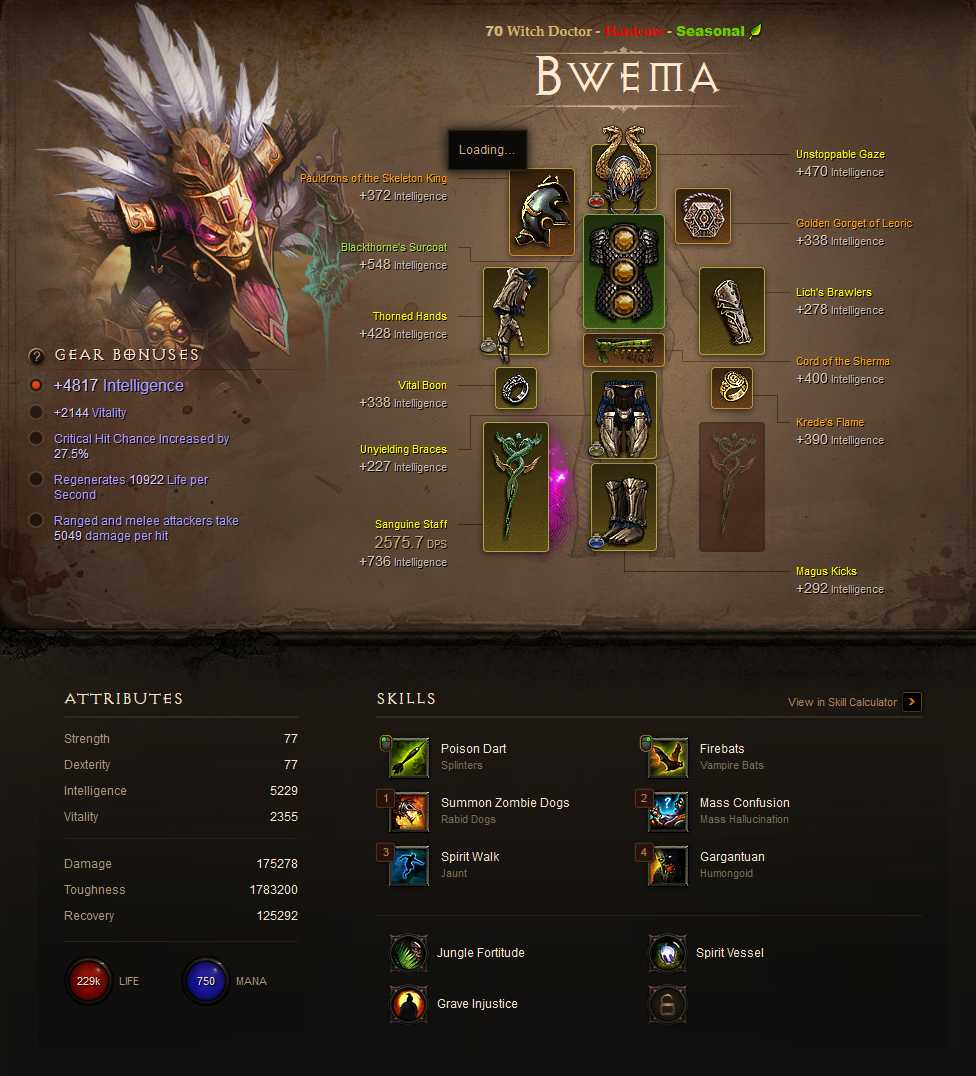 I found having pets to be very useful, hence Zombie Dogs/Gargantuan. For a lot of the play-through I had the ring that splits the Gargantuan in to 3 smaller ones, which I found useful. As a follower I used the Templar in the hope that he would help keep mobs away from me. However, I found that he didn’t really do too much. I struggled to get gear for him due to the smart loot system, which probably contributed to him being not so useful. I found Spirit Walk to be a very useful spell, as it got me out of a lot of dangerous situations (I love that it allows me to pass through waller walls). I took Spirit Vessel out of paranoia at around level 60. I was very nervous that I was going to die and lose my character, so I took this as a safety net. Thankfully, it was not needed.

Overall, I would recommend leveling a Hardcore character as it forces you to consider your play-style a bit more (i.e. no setting Torment 1 and hoping for the best). I’ve heard people complaining about solo leveling HC characters before, but I found it to be an enjoyable experience a lot of the time. I very much enjoyed running through the entire story again at my own pace (having not played through the campaign in probably over a year), but having some company for the bounties grinding would certainly have been nice! As enjoyable as it was, I don’t think that I will be leveling any more HC characters any time soon. I may continue to play this one though, if only just for the max-level boss killing achievements.