In New Quay
I went on a trip to New Quay in Mid Wales today to try and spot some dolphins.  We went on the one hour tour with New Quay Boat Trips, which was the only one running due to the high winds.  The tour also took a much shorter route than usual due to the weather.  However, despite the winds it was still sunny.  We got splashed/thrown around a bit due to the waves.  Unfortunately my GoPro battery had died (I’ve only had it less than half of a year yet the battery is noticeably poorer at holding charge already), but I did manage to take some video using my phone:

We went part way across the bay and returned without seeing any dolphins.  However, when we approached the head of New Quay, we began to see some.  We did not travel far around the head as the waves were much stronger there, but I still managed to take some photos.

The seagulls tended to hang around above where the dolphins were.  This is because the dolphins smack their tale on the water to stun fish (making them easier to eat).  The seagulls have figured this out and fly in and grab uneaten fish/the remains of fish.  We also saw a gannet following the dolphins:

Some dolphins came near-ish the boat (I was using a telephoto lens), and I was able to get some close-up pictures of them.  Due to the wildlife safety regulations that the boat company meets, we were only able to spend 10 minutes in the area before moving on so that the dolphins did not feel threatened.  Still, this was enough time to get some pictures: 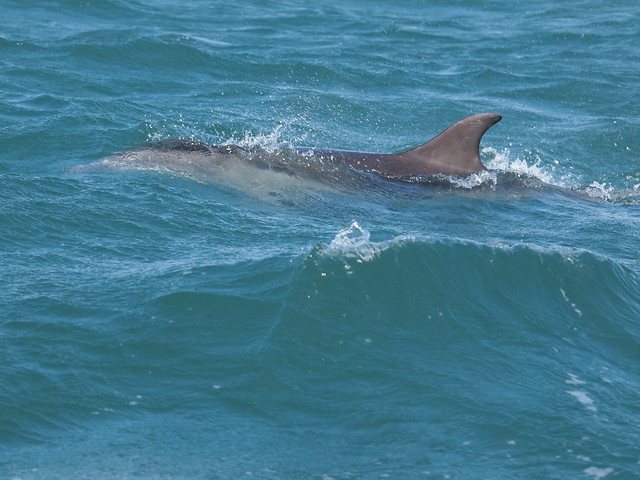 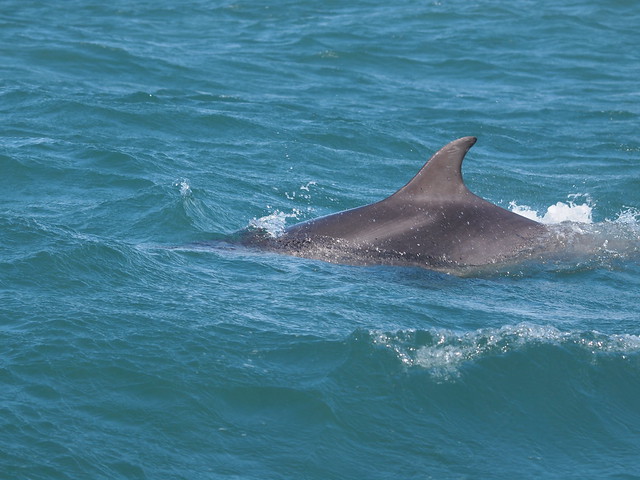 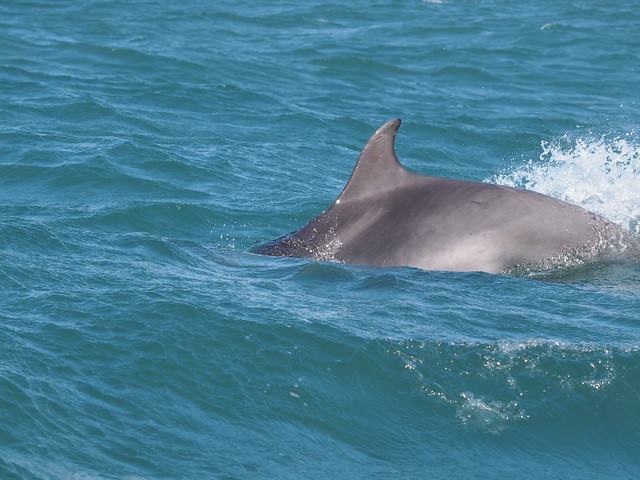 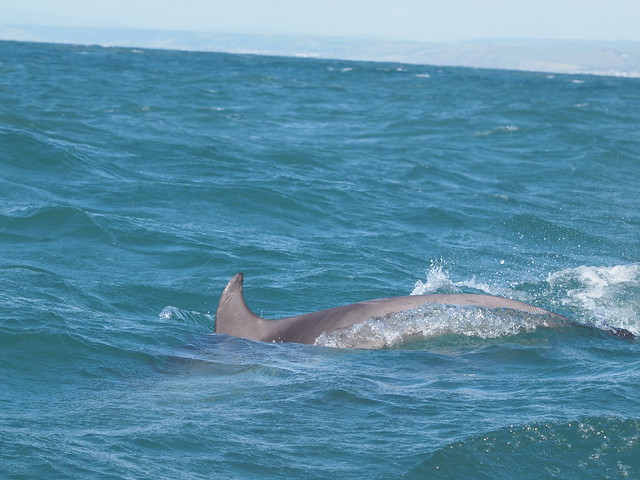 We were told that there are about 250 identified dolphins in the Cardigan Bay area.  These can all be uniquely identified by the various markings on their fins, which act as a “fingerprint”.  There are teams in New Quay which sit on the coast attempting to take photos of the dolphins and their fins for monitoring purposes.

In Aberystwyth
Dolphins are occasionally seen in the bay of Aberystwyth.  However, I’ve found that on sunny days there are often dolphins by the light house.  Previously I’d only seen them when jogging, so the only photos I had of them were taken with my phone:

On this occasion (in mid April) I had seen what appeared to be 2 dolphins.  One looked smaller and quite pale compared to the other, and I suspected that it was a mother/baby.  On the tour in New Quay the staff commented that young dolphins are quite pale, which adds to the theory.  We decided to head to the light house on the drive back to Aberystwyth from New Quay to see if there were any dolphins about today.  As we got nearer the weather became increasingly bad, so we did not hold any hope of seeing dolphins.  Instead we decided to take advantage of the moody lighting and high waves to take pictures of the light house. 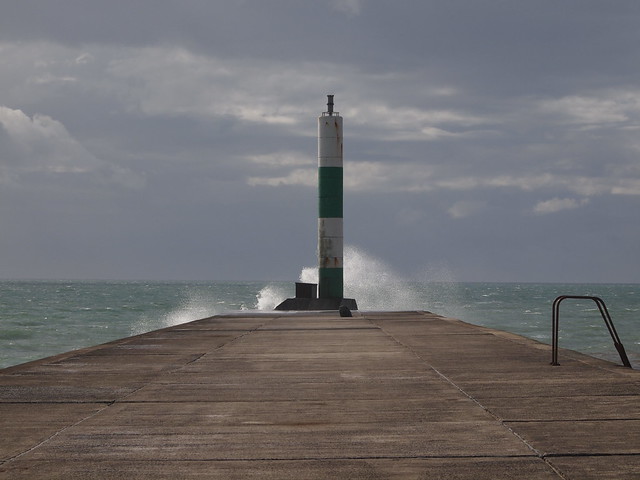 My partner had a medium distance lens with him, and so walked further along the wall than I did.  When he was out there, he spotted that there were infact dolphins present.  There seemed to be two dolphins (a large one and a small one) again, and it seems possible that these were the ones that I had seen previously.  They hung around close to the rocks for a while, and so I was able to get some pictures (in between wiping sea spray from my lens and removing my hair from my face). 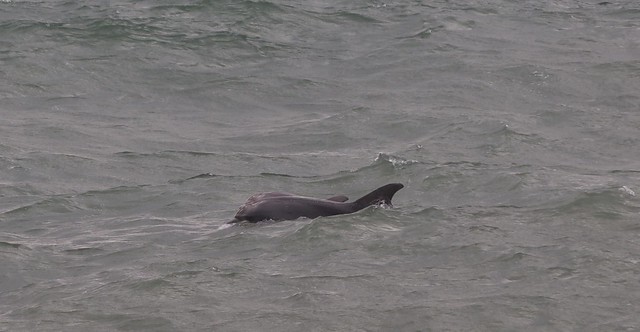 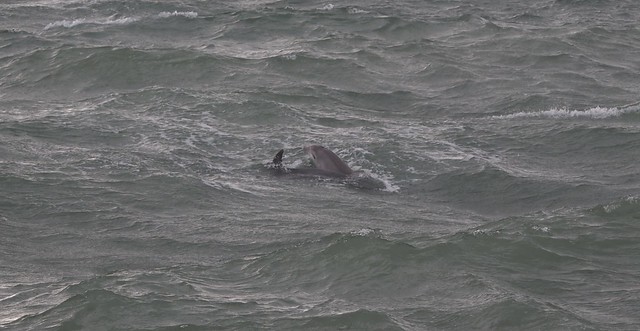 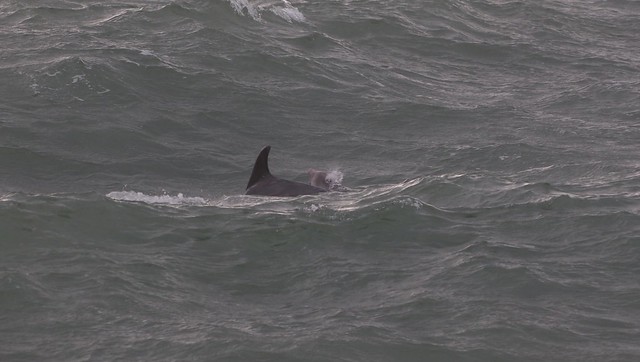 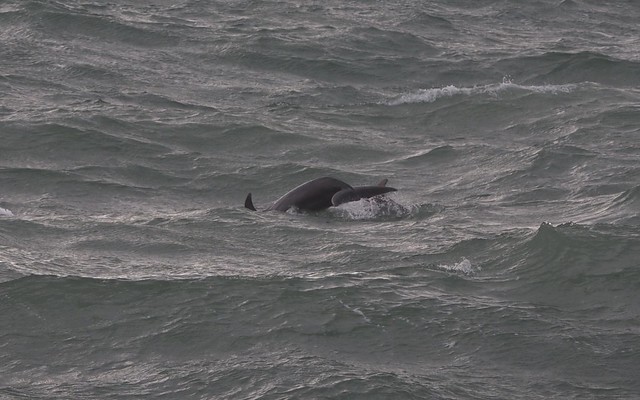 The dolphins began to head out to sea, and when they did it seemed like there may have been another dolphin slightly ahead of them.  I recorded some video of the scene on the wall (which is quite loud due to the wind):

Towards the end of the clip some dolphins did touch the surface, but the camera quality is too poor to really be able to pick them out.