Today was the first outdoors test flight since attempting to fix the drifting issue.  From this flight, we found that the UAV’s ability to hold it’s height is still not perfect.  However, it should be completely sufficient for the purposes of my project.  A video of the initial test can be seen here:

The main purpose of this outdoor test flight however was to test the UAV’s ability to navigate to waypoints.  For this, we were using the waypoints from my previous post: 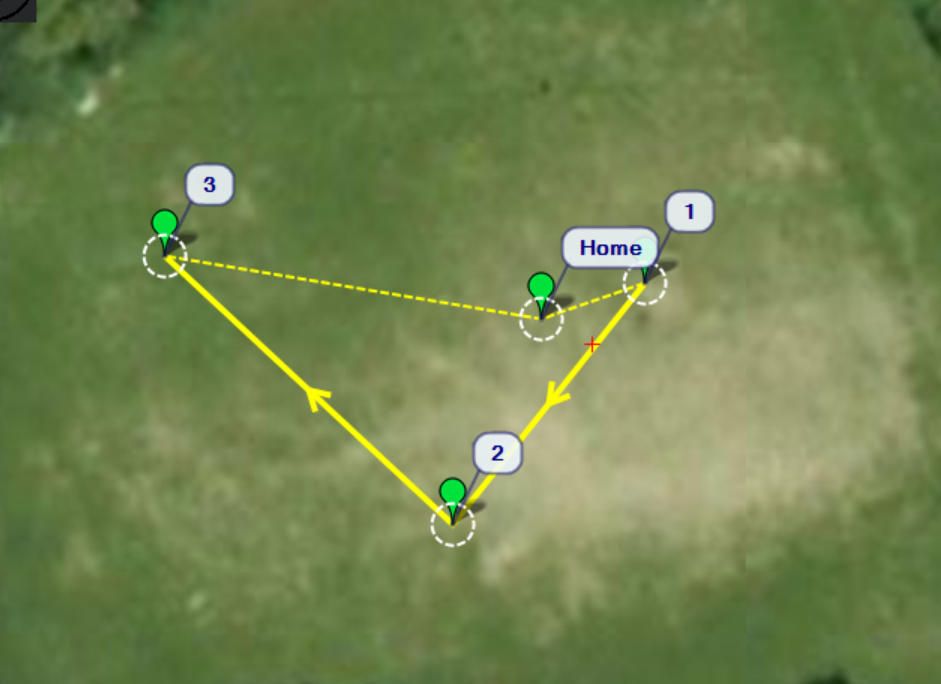 It occurred to us that when editing the preset modes on the controller, I had not added “home” as one.  This means that we could not verify where the UAV believed home was.  This is something that we will really have to do for the next flight, as there seemed to be some issues with navigation on this test.  The UAV was set to fly at 20m, which it ascended to without issue.  It then headed off towards where waypoint 3 should have been, for no apparent reason.  I apologise in advance for the poor quality video (it was recorded on my phone, and the sun made it hard to see where the UAV was):

In this video, the UAV appears to struggle at around the 0:24 point.  This as it turns out was because some of the wires from the battery came unfurled and landed on one of the propellors, causing the following damage: 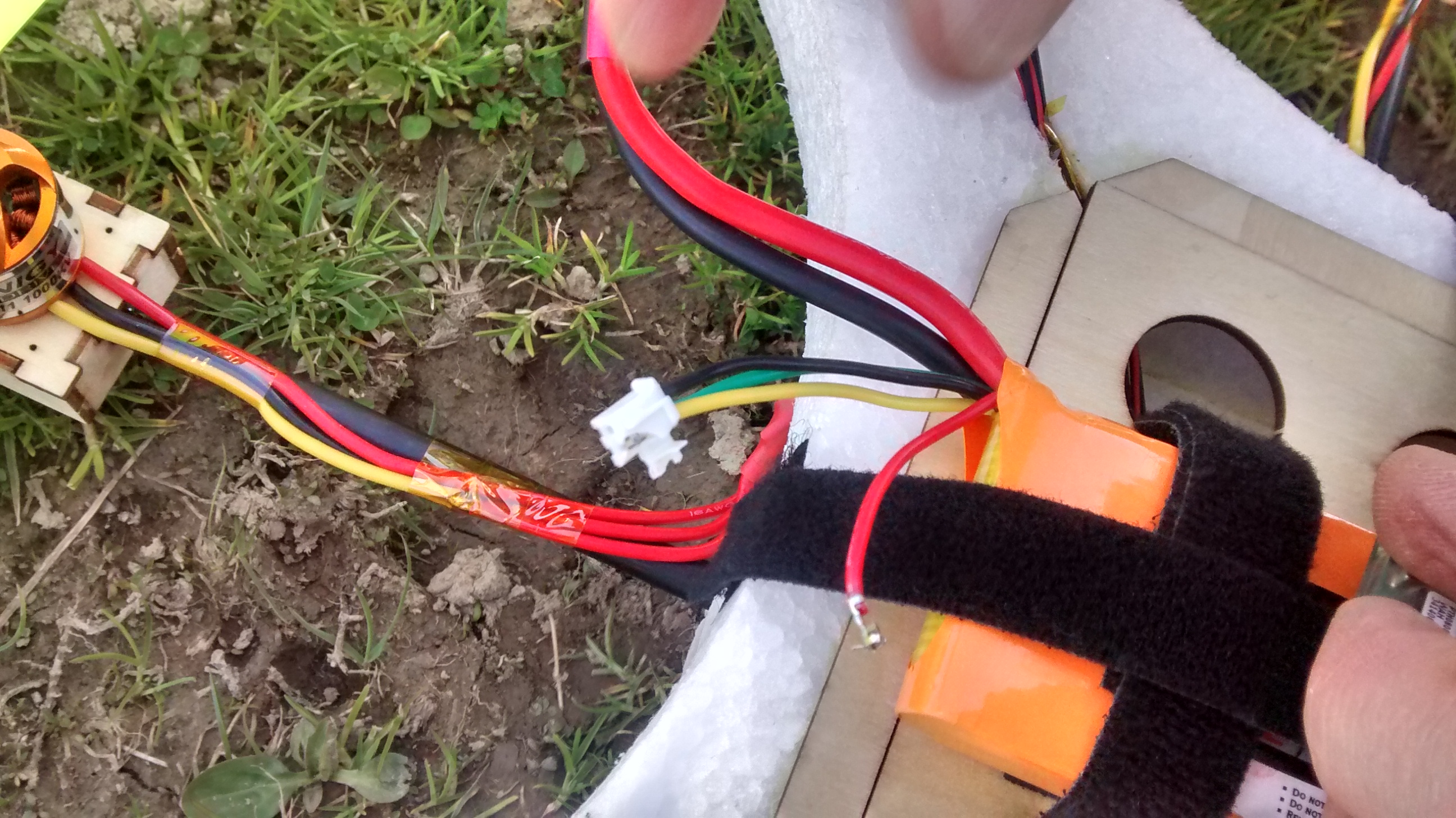 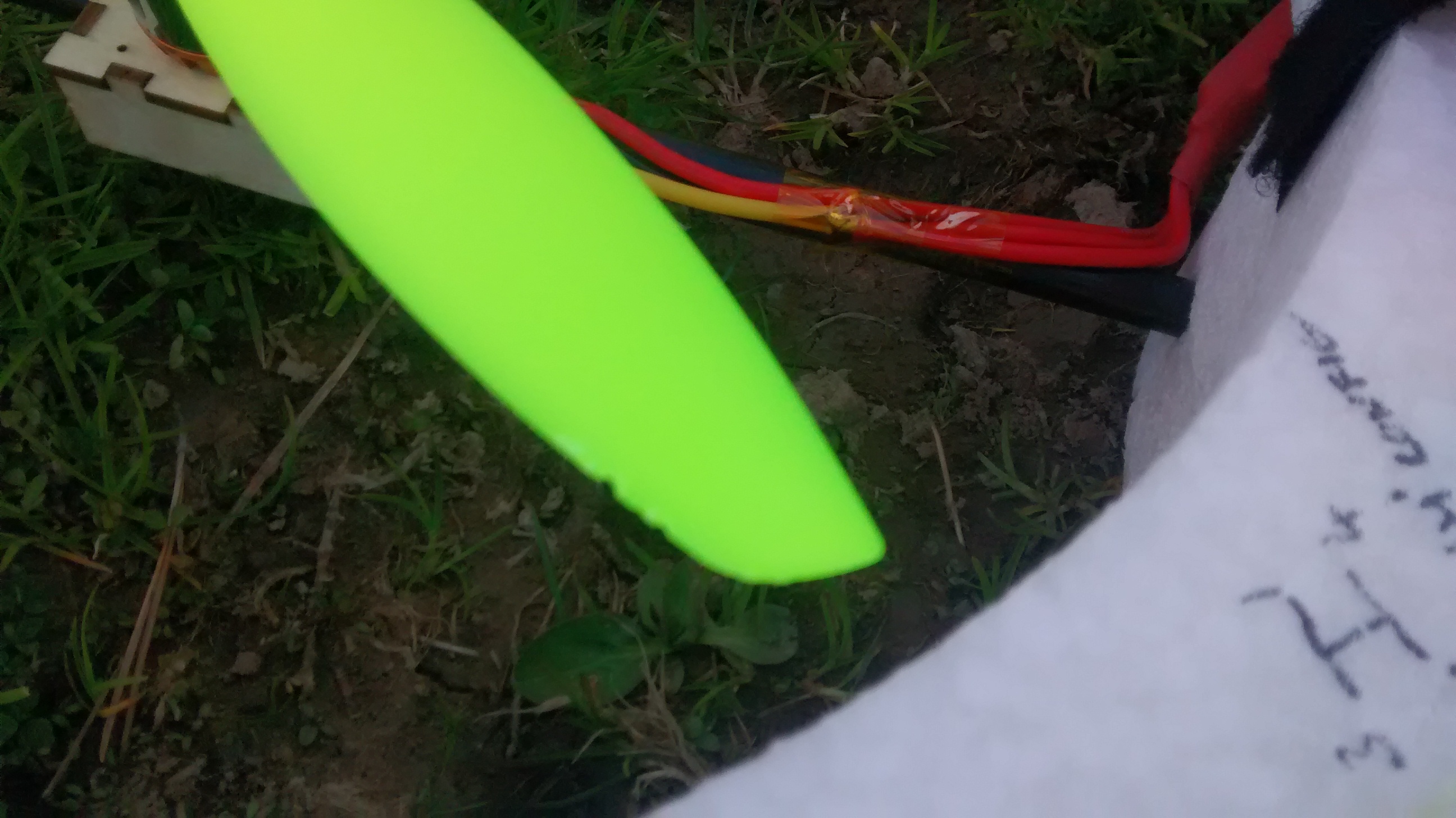 It is just as well the wires did not touch during flight, or we would have most likely had greater issues.  The damage to the propeller is minor.  It does now however mean that 3 of the 4 quadrants of the UAV have taken visible damage.  I hope to keep area 3 (as it is labelled) in good condition, but know that this is not likely to happen considering my current track record.

On the waypoint test flight, the UAV flew the opposite direction to that expected, and began to hover above what appeared to be waypoint 3 (without having visited 1 and 2, as it should have).  We suspected that this may have been caused by a GPS error, as we did not check the UAV had a good fix before flying.  The UAV is set to take it’s launch point as home.  If there was a poor quality GPS on launch, it is possible that home could have incorrectly been recorded.  It is possible that the point being hovered around could have been what the UAV considered to be home, which would have been an incorrect value.  To attempt to ascertain if this was the cause, I looked at the GPS logs: 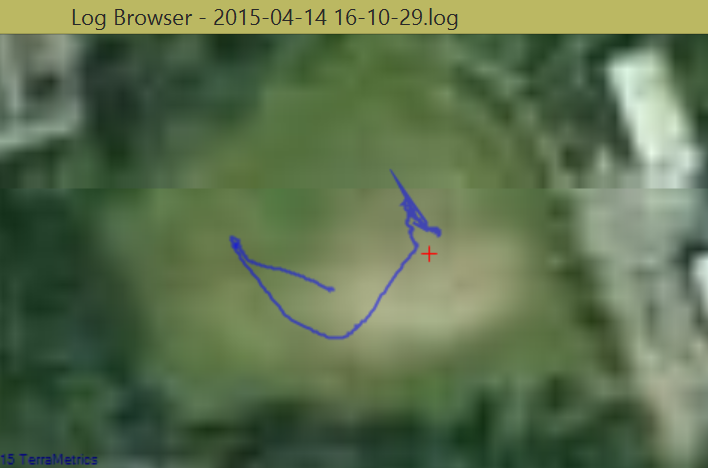 I have no idea what has happened to the image quality of the maps, as previously it has been much better.  Unfortunately this log actually contains the data from the initial height holding test flight, as well as the waypoints flight.  It also shows the point at which manual control resumed to return the UAV.  The arc taken by the UAV does appear to head towards waypoint 2 however.  The point at which the autopilot was engaged was very close to waypoint 1, and so we most likely simply missed it heading to that point.  It is hard to say if the UAV actually did fly in this arc or not, due to the height (20m) at which it was flying.  In future test flights I may try and position a few volunteers around the field to visually verify that the UAV is heading in the correct directions, or simply try and follow underneath it.  I may also go ahead with my plan to add a camera to the UAV, to use to verify movements.  I will also try and add more distinct waypoints, perhaps having the UAV zig-zag.  The wiring of the battery will also need to be fixed/replaced.