As a side project, the falconers and I wanted to experiment with mounting cameras on birds.  I purchased an 808 model key fob camera (left), and a Dizaul Mini Camera (right). 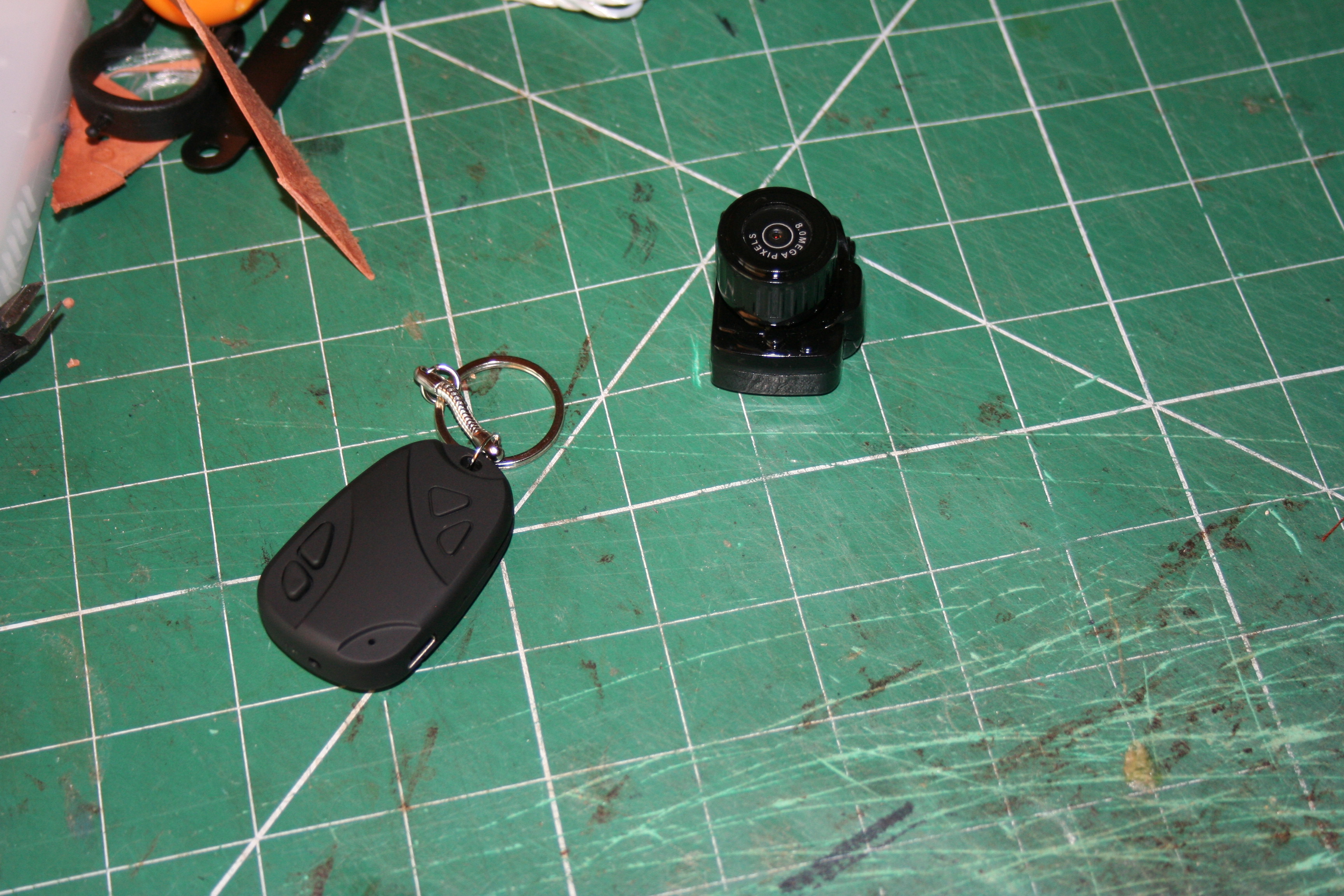 The Dizaul camera was the more expensive of the two, and so I had higher hopes for it (video quality wise).  However, it’s a fairly obtrusive shape (trying to look like an SLR camera) compared to the 808.  We decided that it would be best to mount the camera on the birds’ head, as shoulder mounted ones get moved around a lot when the bird is flapping.  So, it was decided that an old hood should be modified to take a camera. 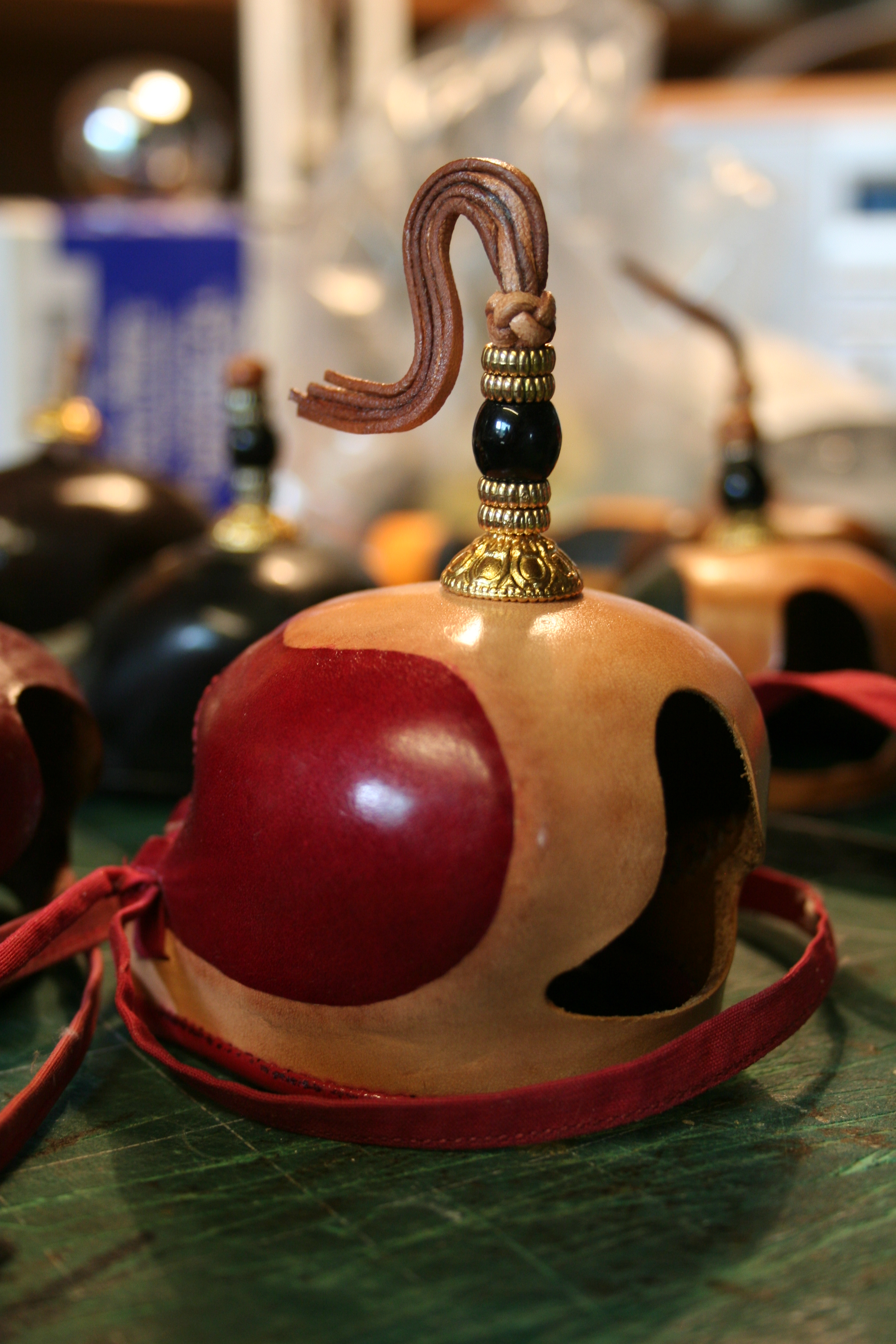 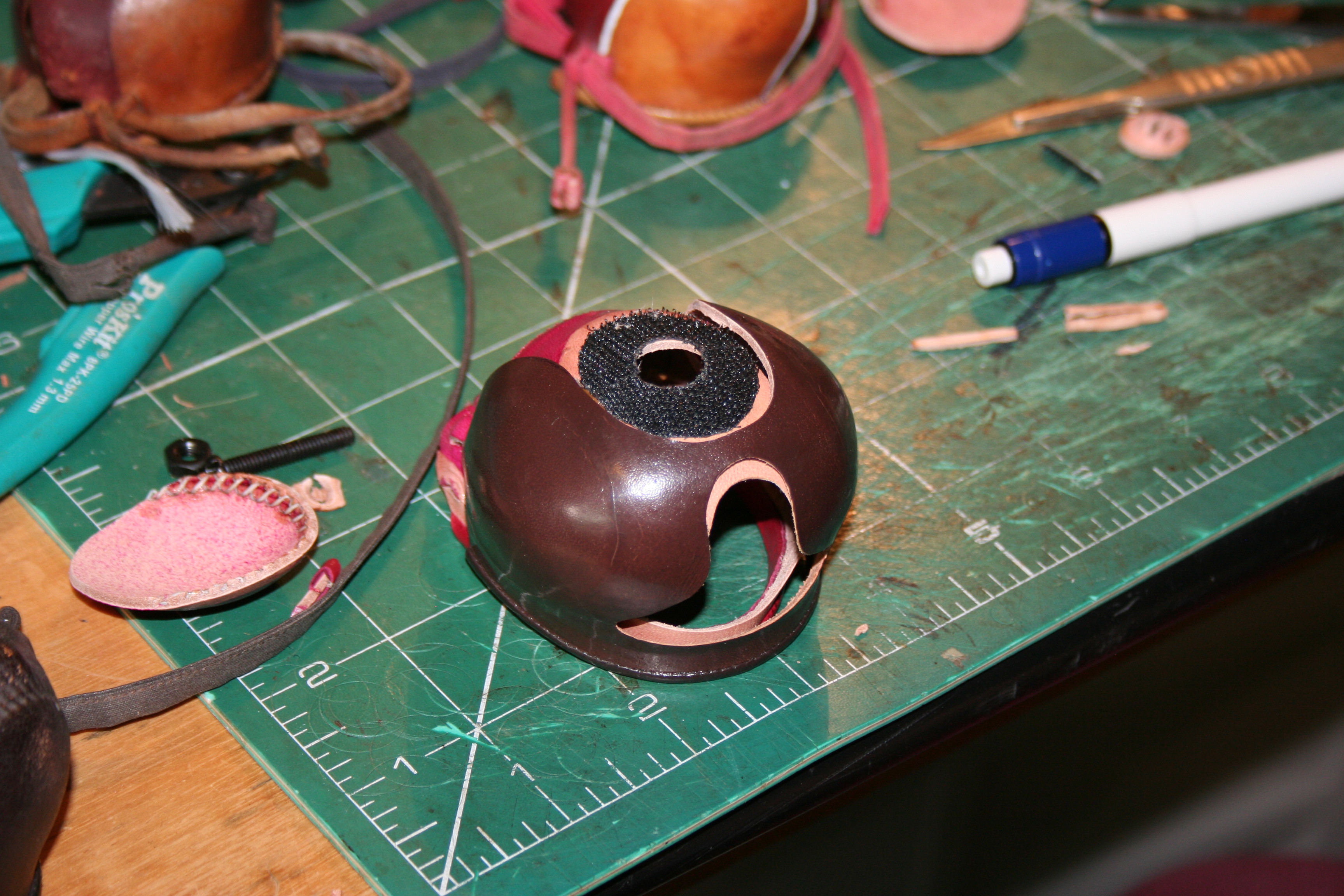 The hood has been modified to have the eye areas cut out in the front, and velcro has been attached to the top.  The plume had to be cut out, resulting in the hole seen above.  A second hood has been cut down to act as an eye cover so that the bird can more easily be hooded.  This is held on by a small velcro strap at the back, so that it stays on during hooding yet can easily be removed for flight.  Some velcro was added to both cameras, so that they can easily be attached. 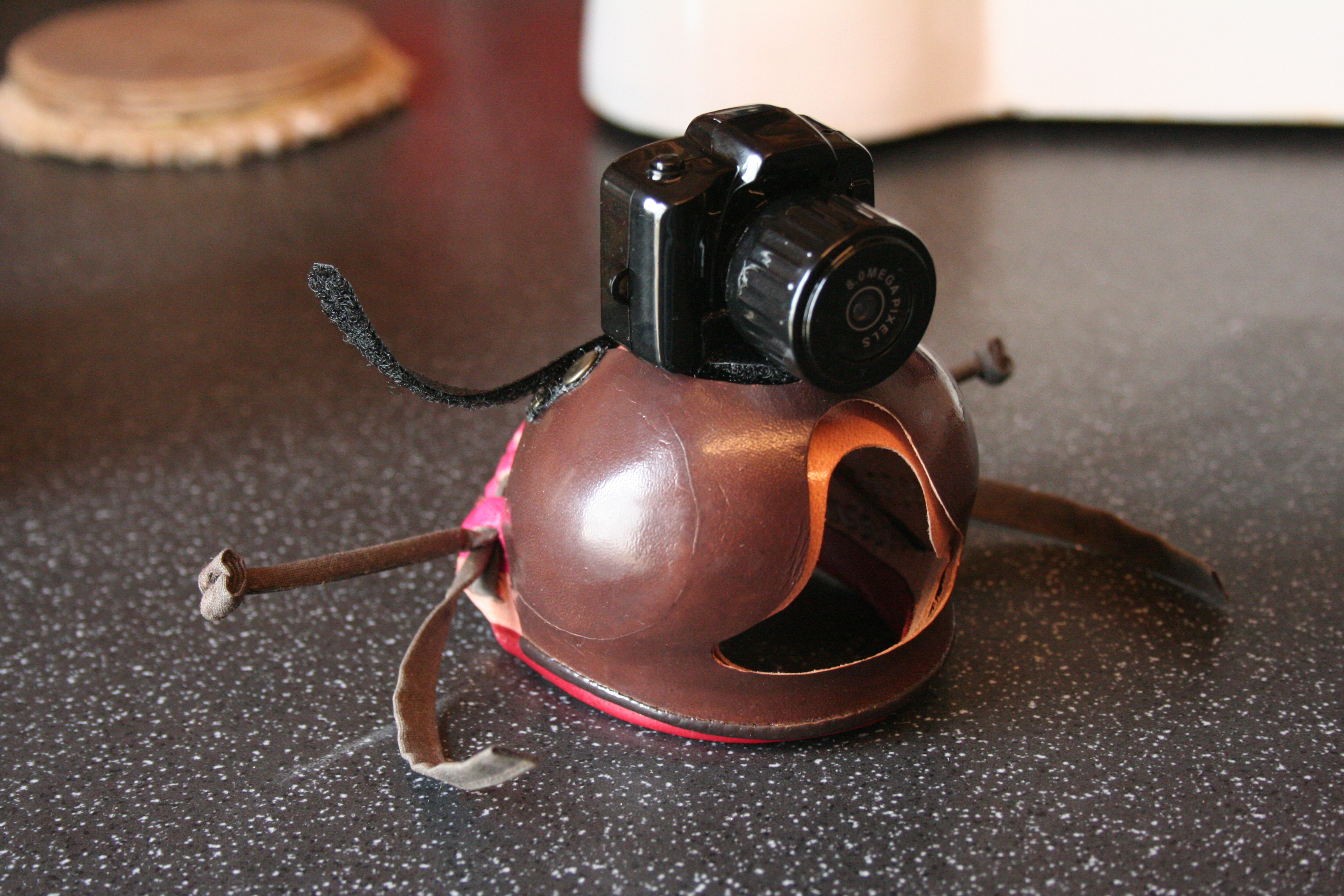 The instructions for both cameras are in fairly poorly translated English, making them hard to use.  We did a short test of a bird wearing this hood (with the Dizaul):

The bird wearing the hood here did not seem to be a big fan of it, and she is indeed a bird that does not hood well.  The hood was also slightly too big for the bird, adding to the issues.  We think that the camera may have been pointed slightly downwards, and so decided to try and position it further back in later tests.  We also did a test with a different bird wearing the 808.  However, the 808 did not appear to record anything.  With both cameras there is an issue that they have a single LED to give feedback.  The 808 has 2 buttons, but the Dizaul has only 1.  Actions are interpreted based on how long the button is held down for.  This combined with poor instructions and lack of feedback that the camera is indeed recording makes it very hard to ensure that video is really being recorded, unfortunately.

I found it interesting how stable the birds seem to keep their heads.  When they are hooded they snap their head around and then drift, but with the hood off the camera is held very steadily.  The birds seemed initially annoyed by the camera, but seemed to get used to it fairly quickly. 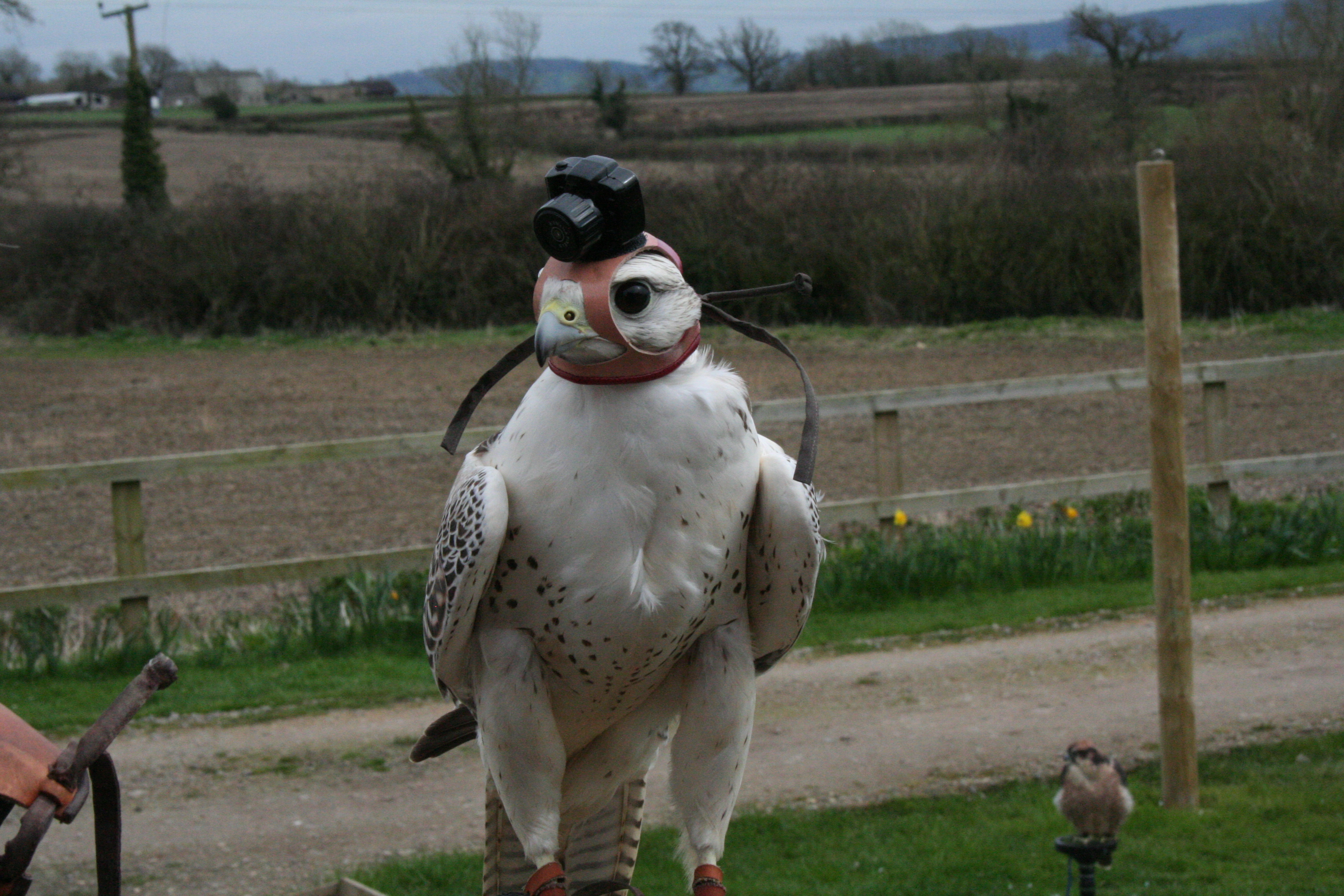 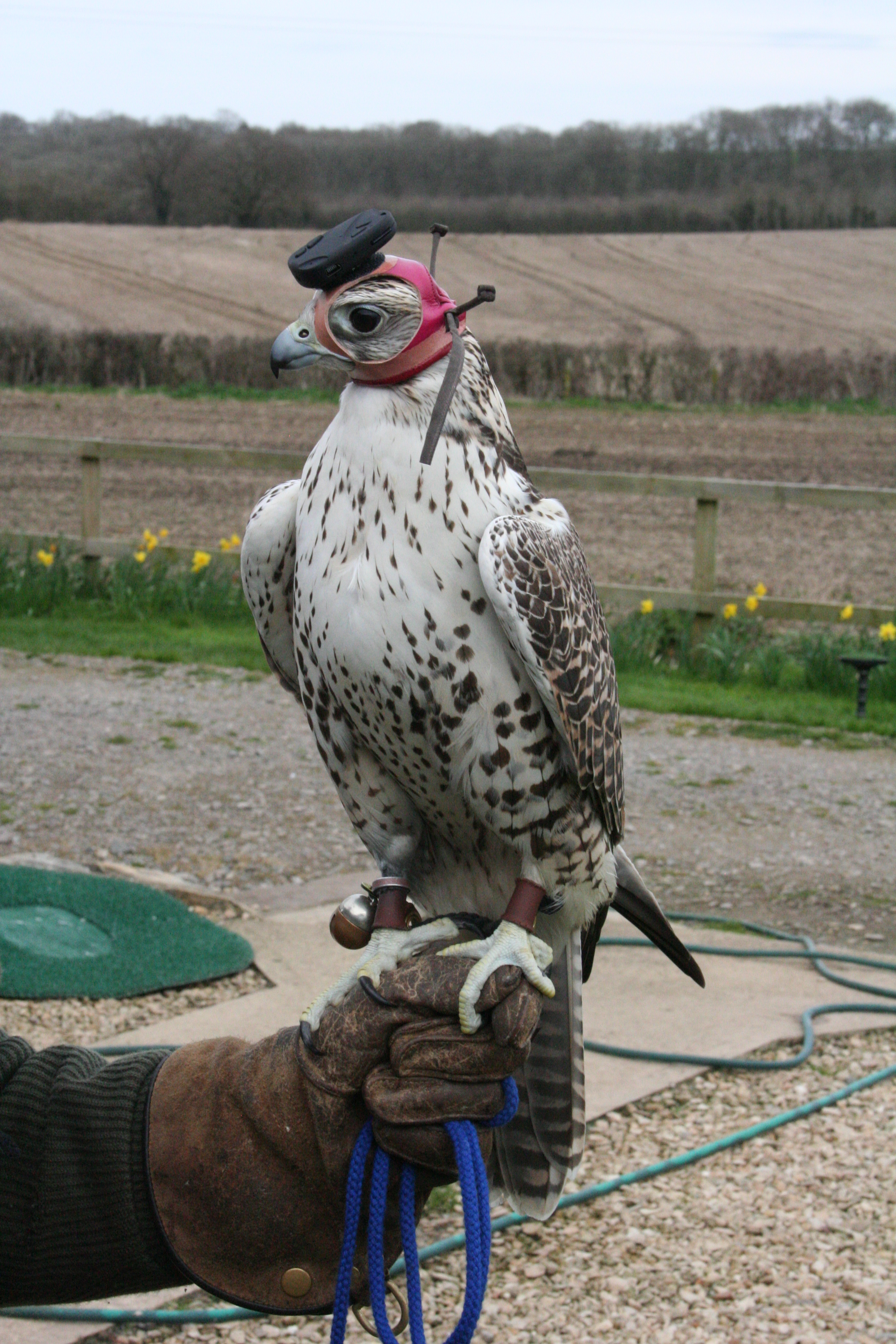 We attempted to do a kite lure flight, and use the Dizaul camera for the flight.  However, as soon as the kite got to a decent height, the wind dropped.  A car-battery powered winch is used to hold/control the height of the kite for falconry, so that during a show the falconers do not need to be concerned with the kite. 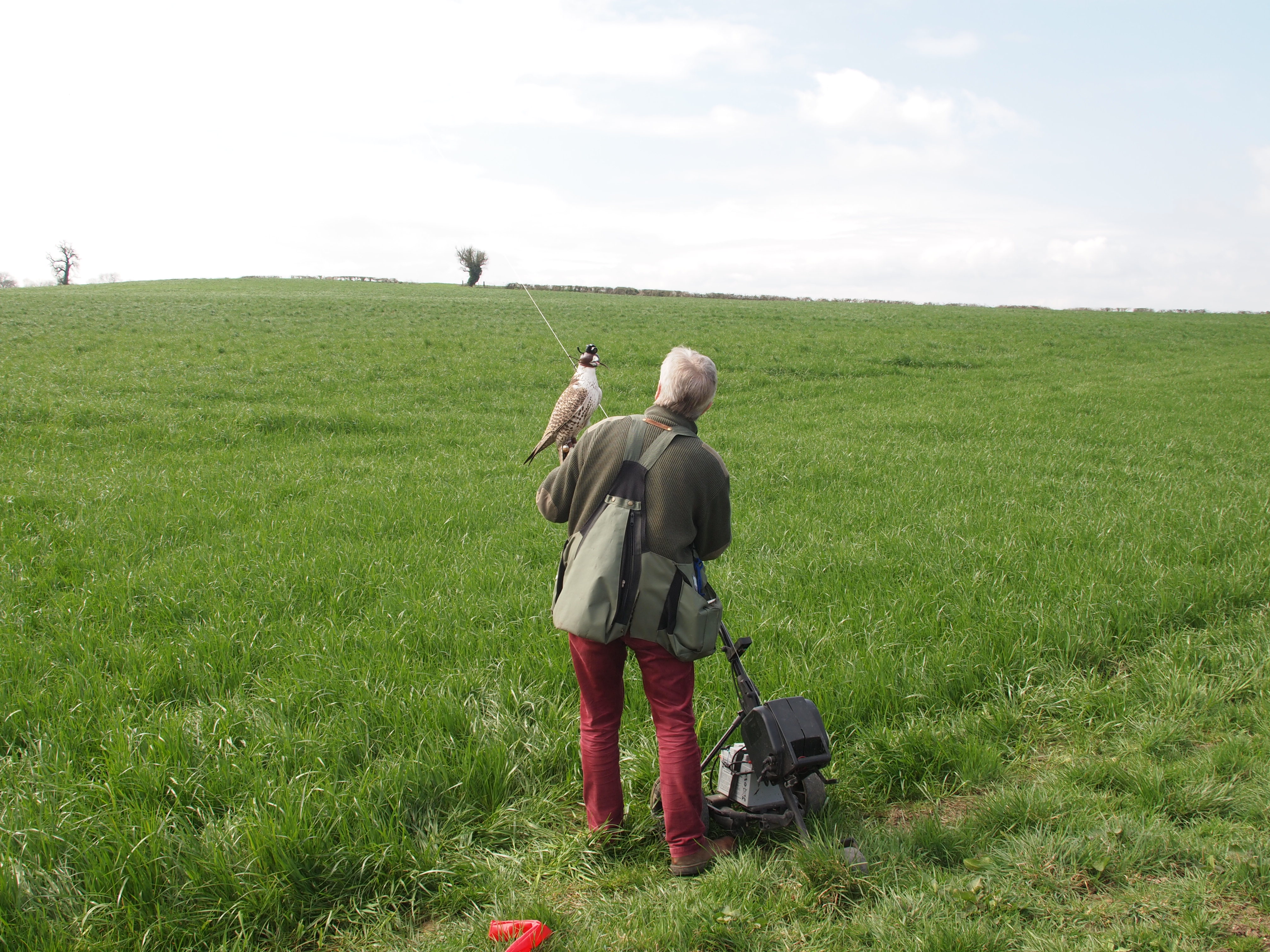 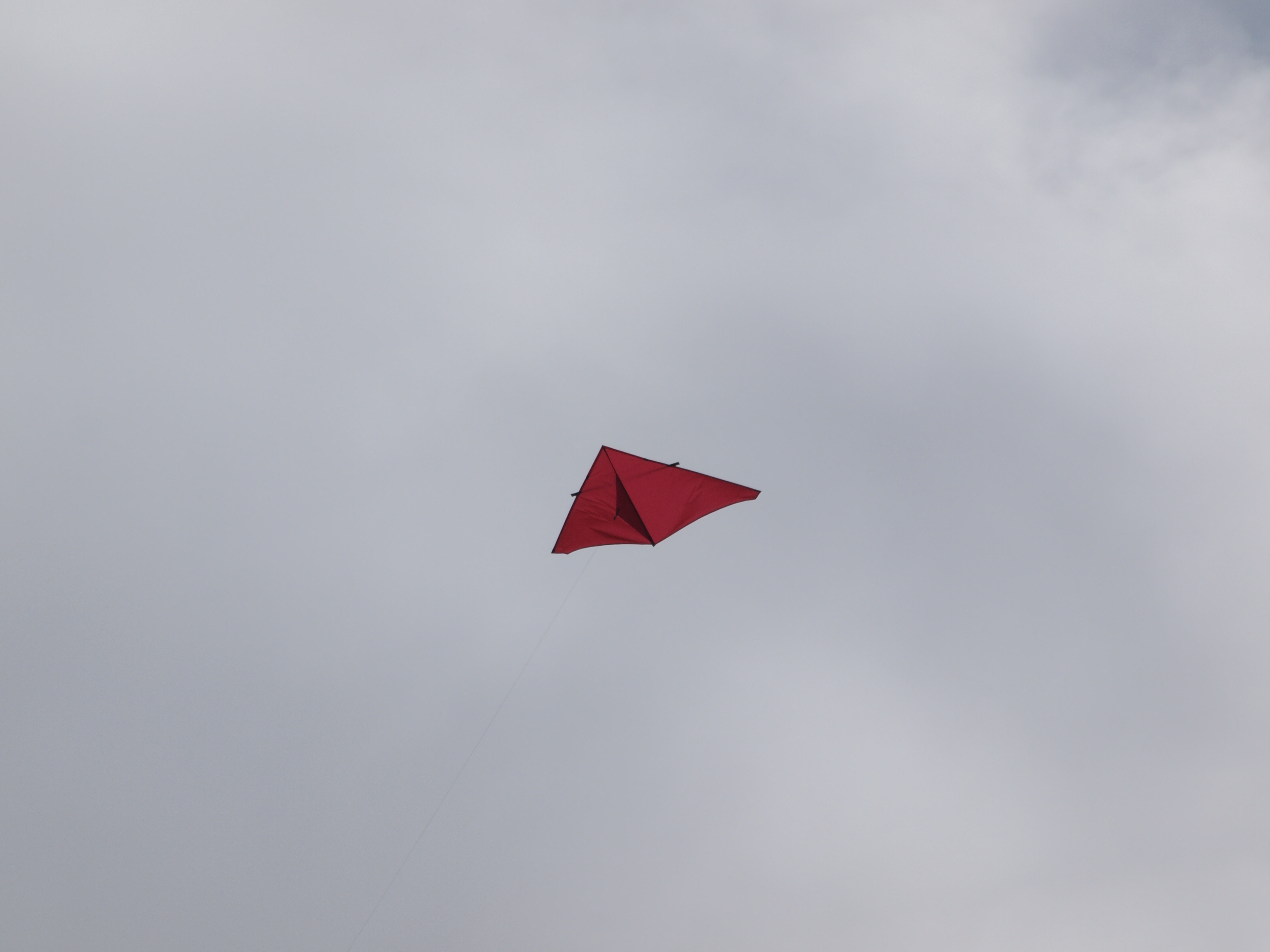 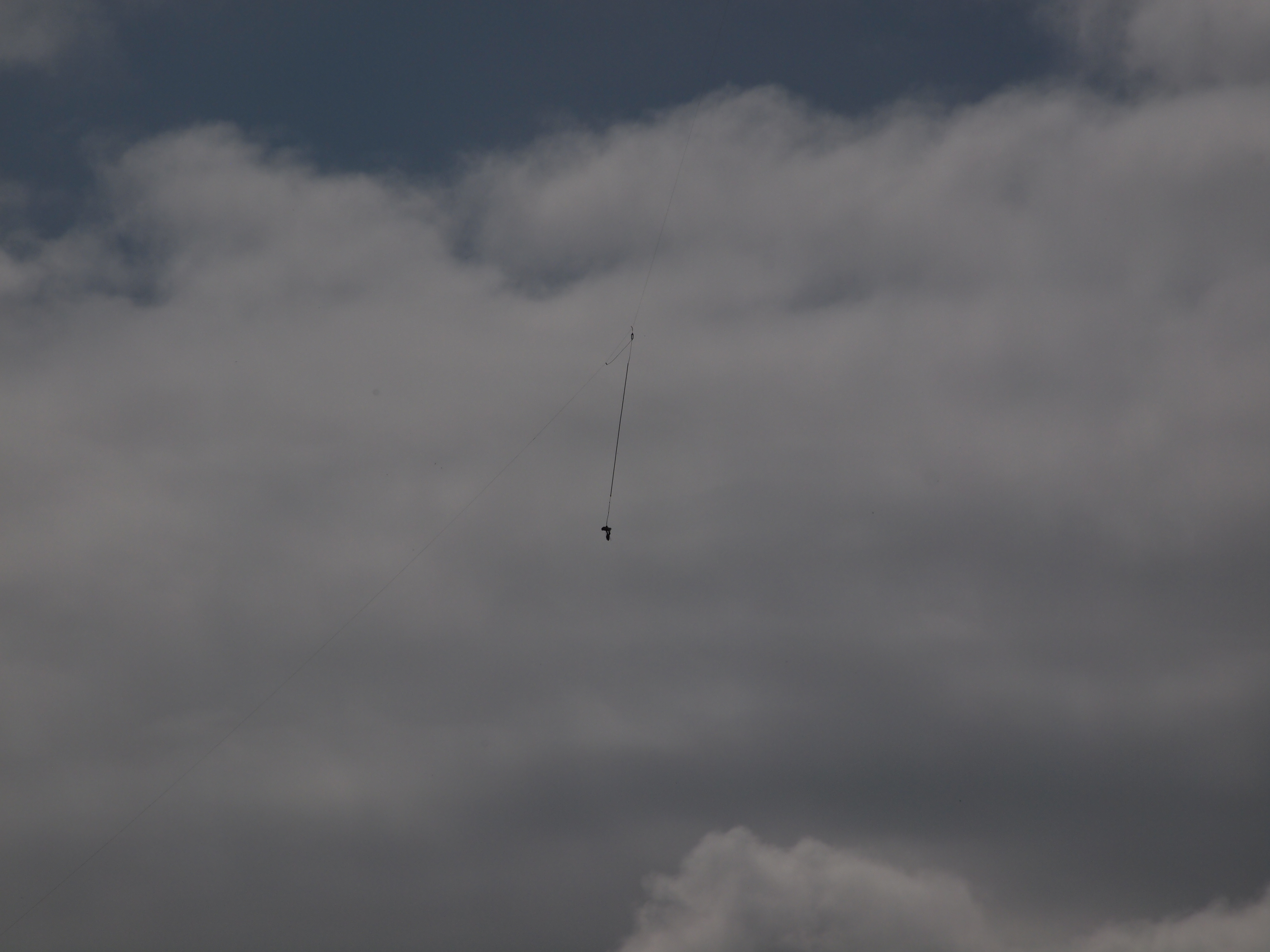 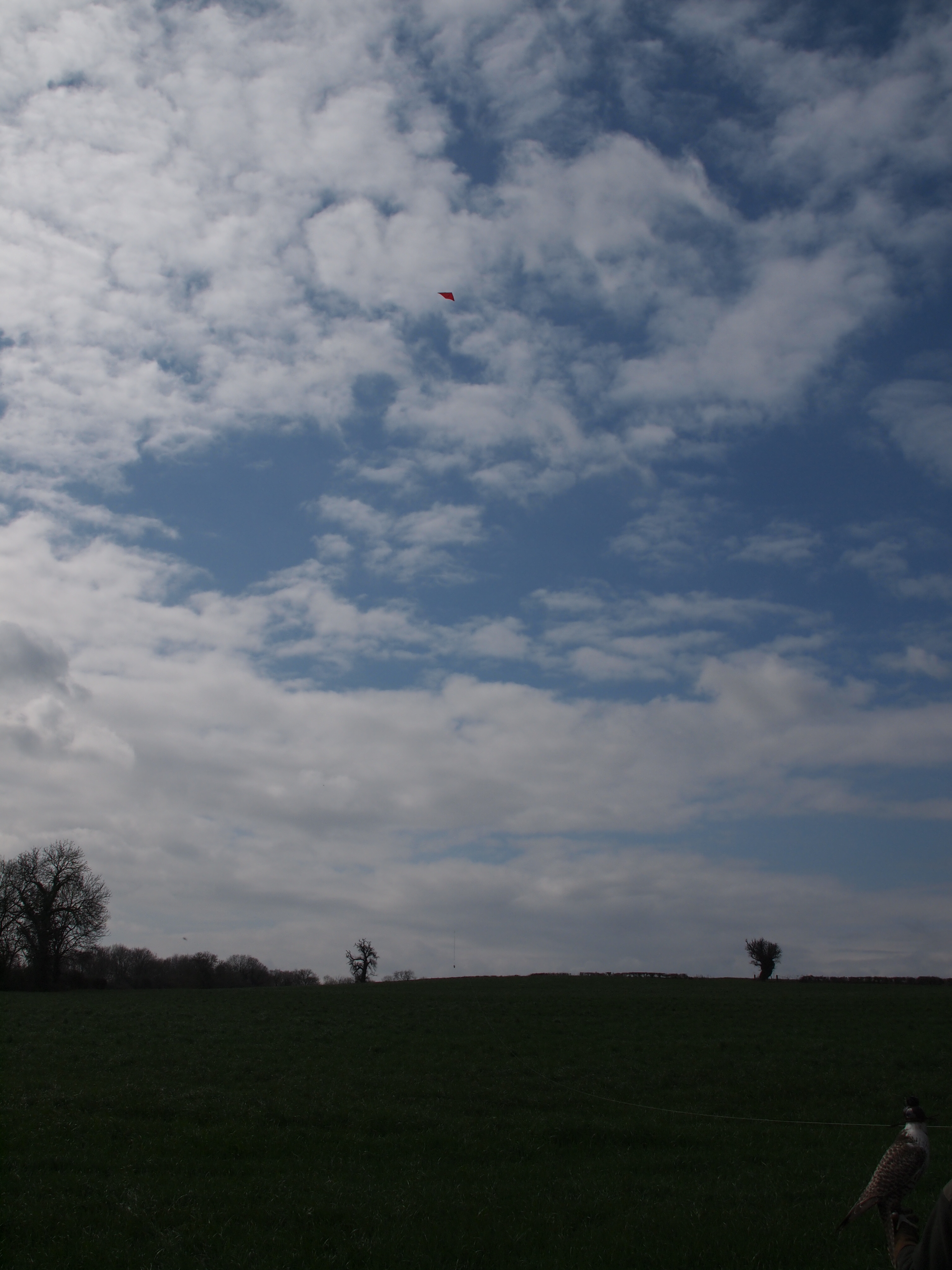 The lure hangs on a loop which is loosely clipped to the kite’s tether rope.  When the bird grabs the lure it is pulled loose, and the tether rope guides the bird/lure to the floor.  This prevents the bird flying off with the lure.  Due to the wind issue we ended up with a very low-hanging lure, resulting in a short flight.  Unfortunately it is highly impractical to turn on the video once the camera is on the bird, and so there is some time pressure to get the bird in the air before the memory card of the camera fills (we went with a cheap 8GB microSD card in case the camera was lost).  The short kite lure flight (with the Dizaul) can be seen here:

The camera is again pointed a bit downwards here.  I also took some photos of the flight: 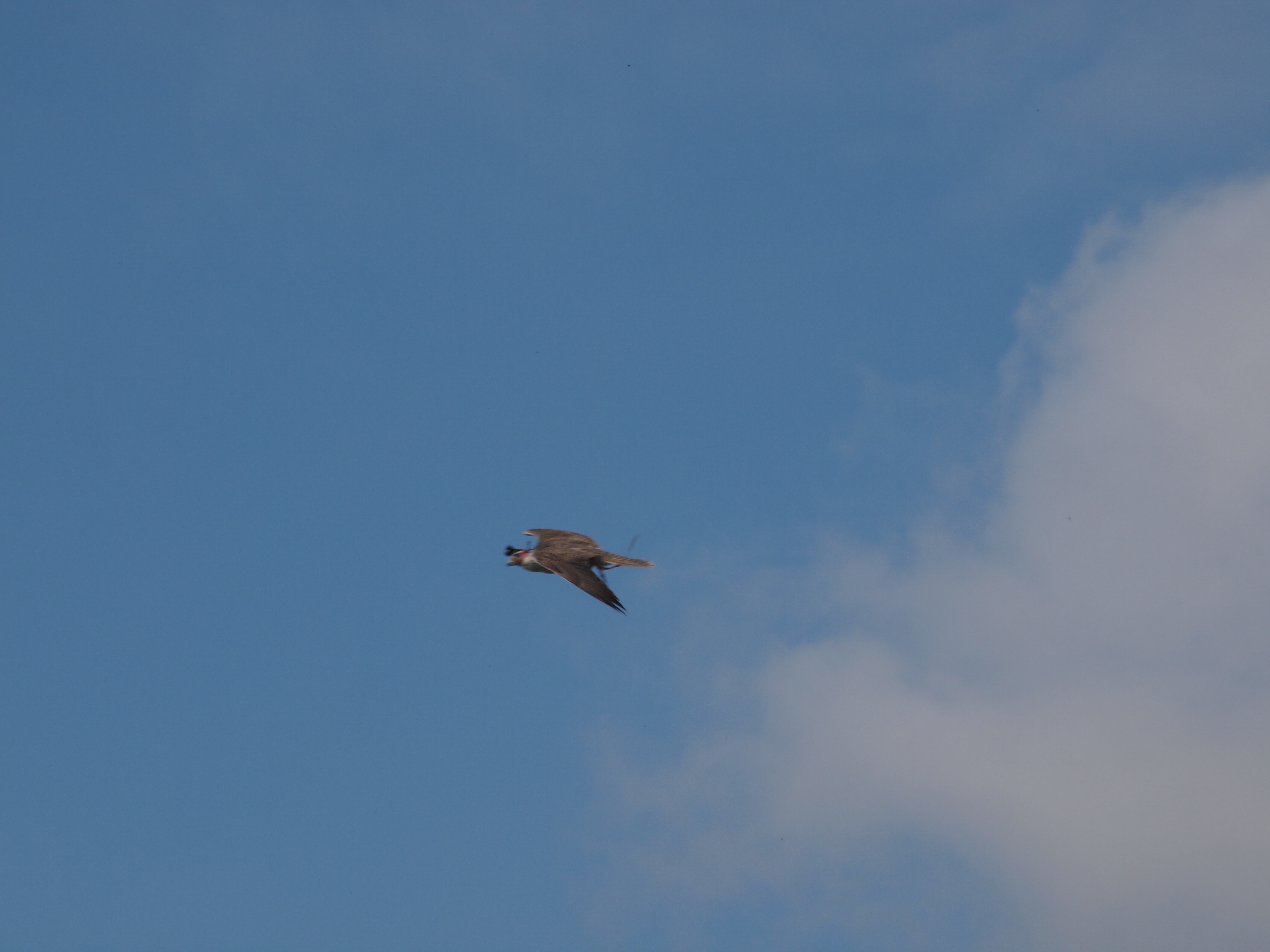 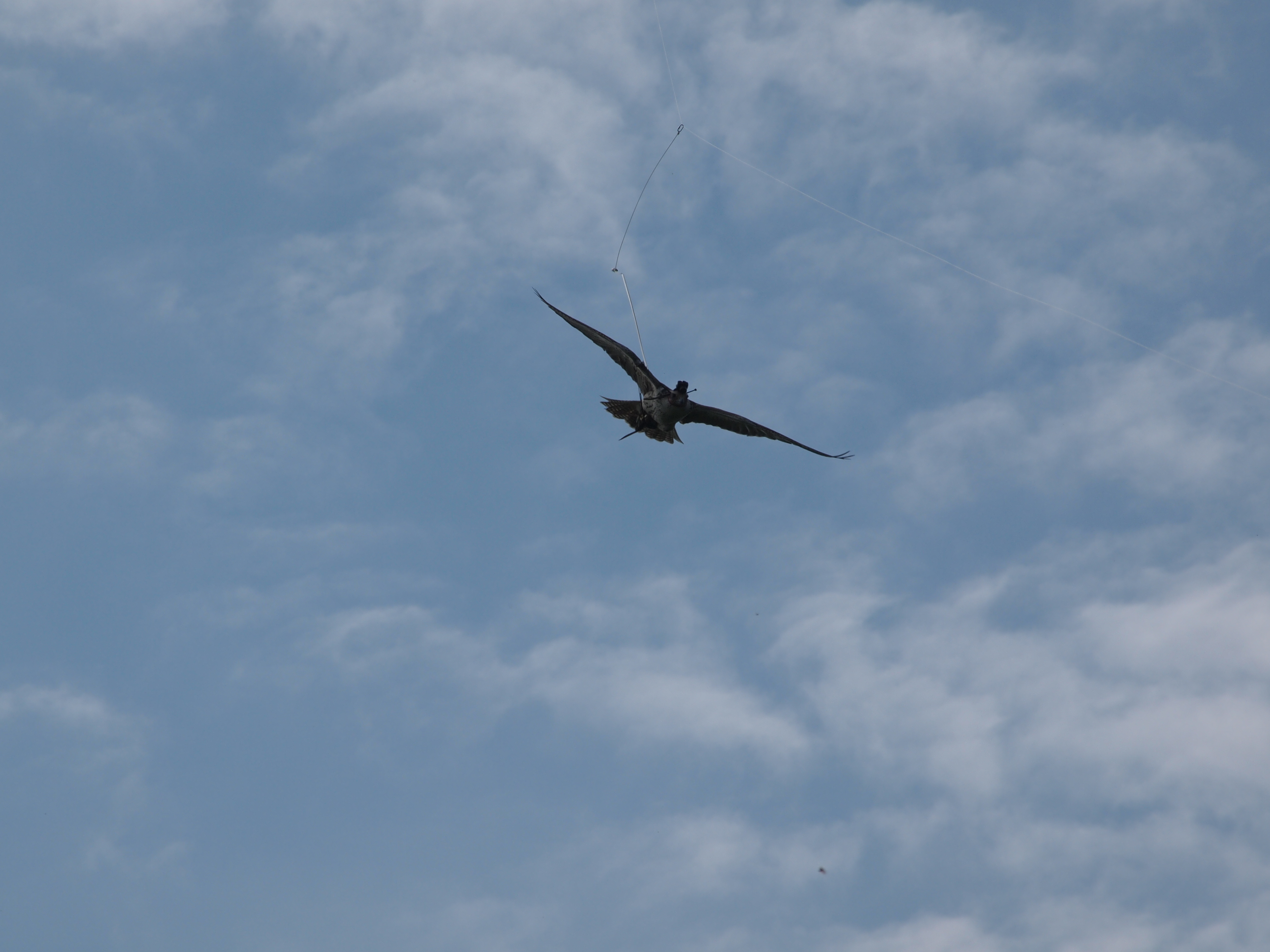 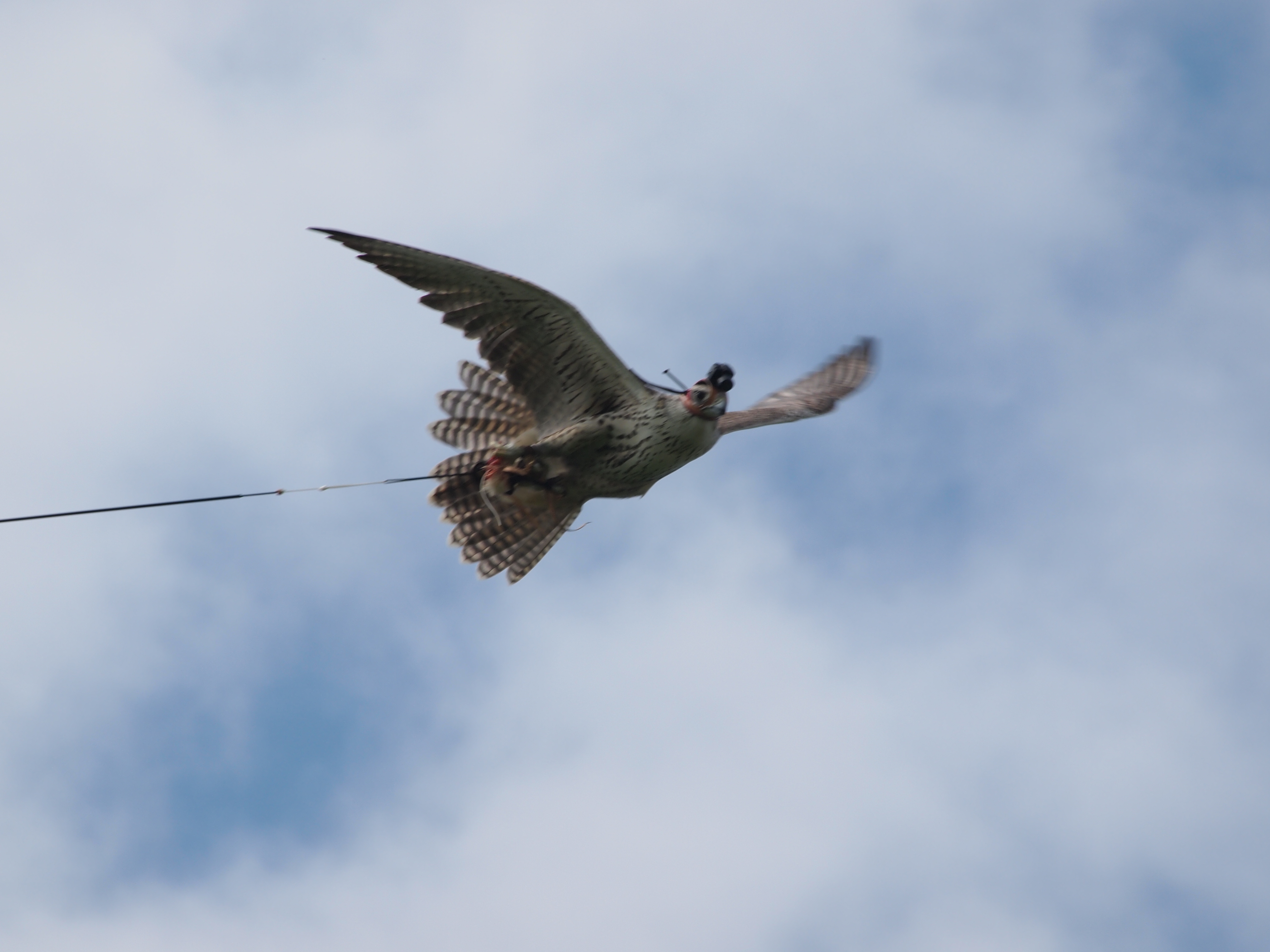 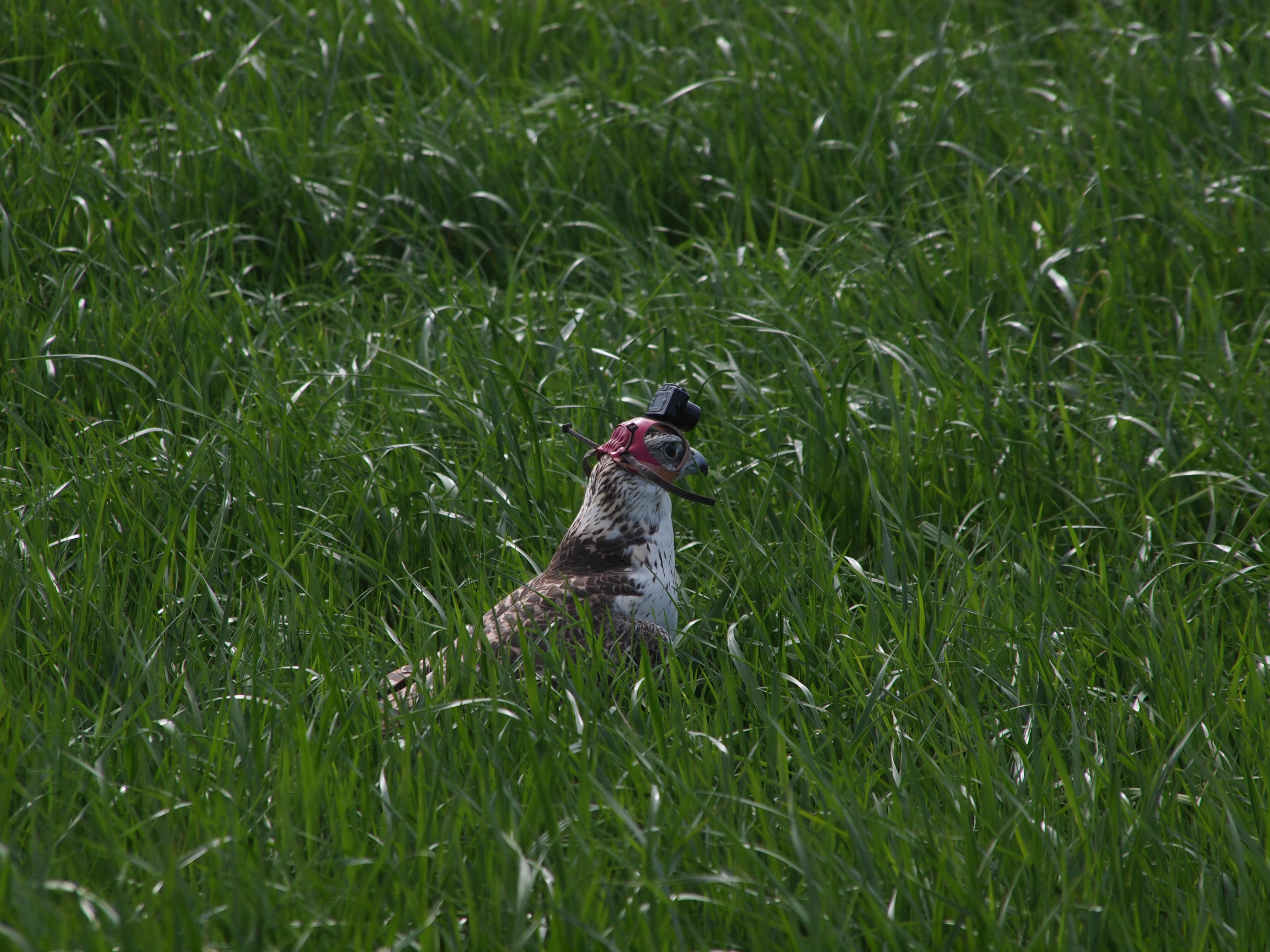 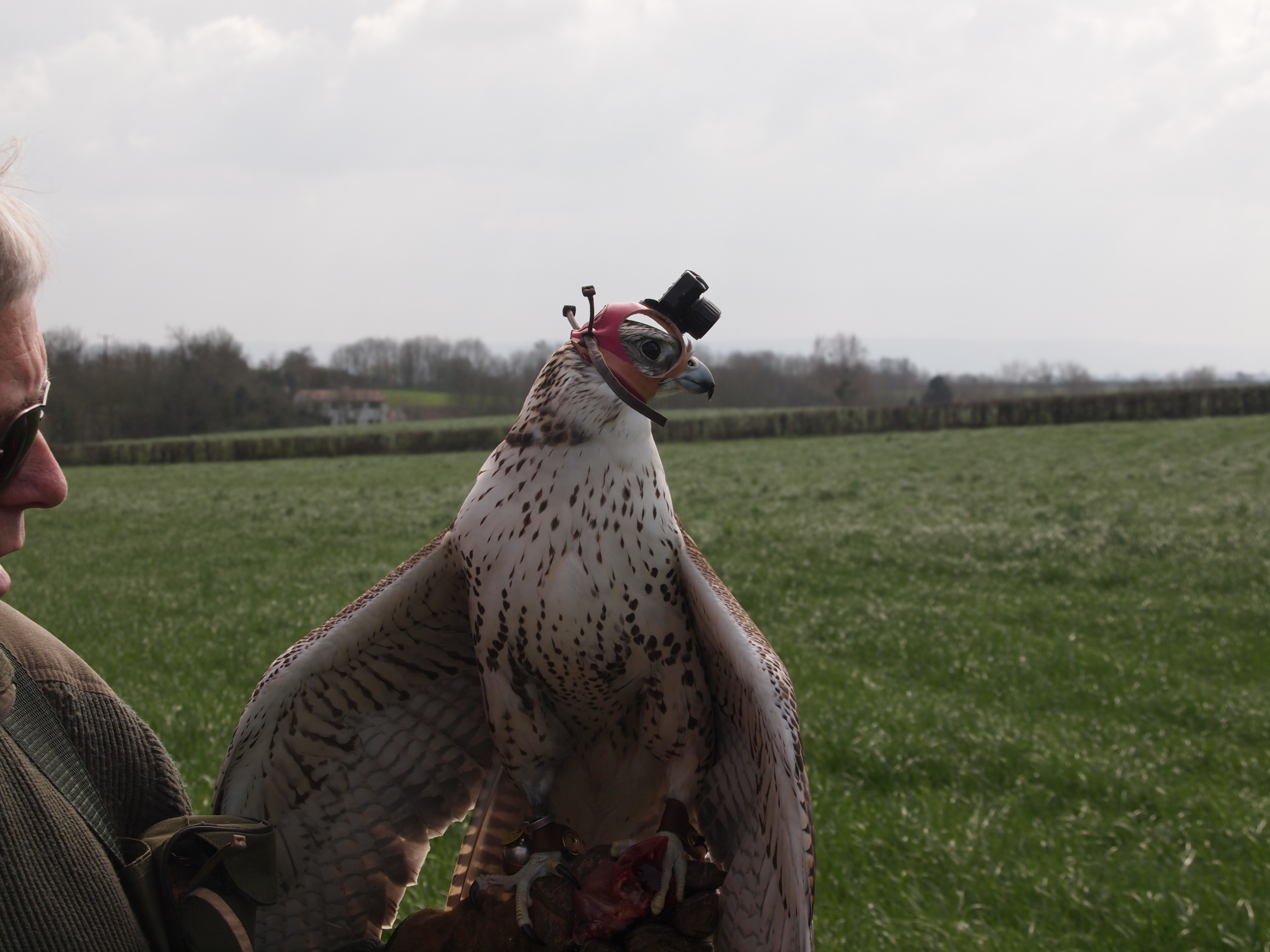 In the last picture it can be seen that the camera ends up hanging forwards a bit.  This is likely because when the bird flies, it’s shoulders move so that it’s head is at 90 degrees or so to the shoulders (i.e. the bird is straight).  This pushes on the back of the hood.  The head falconer at the school is going to have an attempt at designing a hood from scratch that will not have this issue.  We did do another flight with the Dizaul camera with lure swinging, but the camera did not record.  At first, the bird would try and pick at it’s hood using it’s feet when it turned in the air, but seemed to be less bothered by the hood as the flight went on. 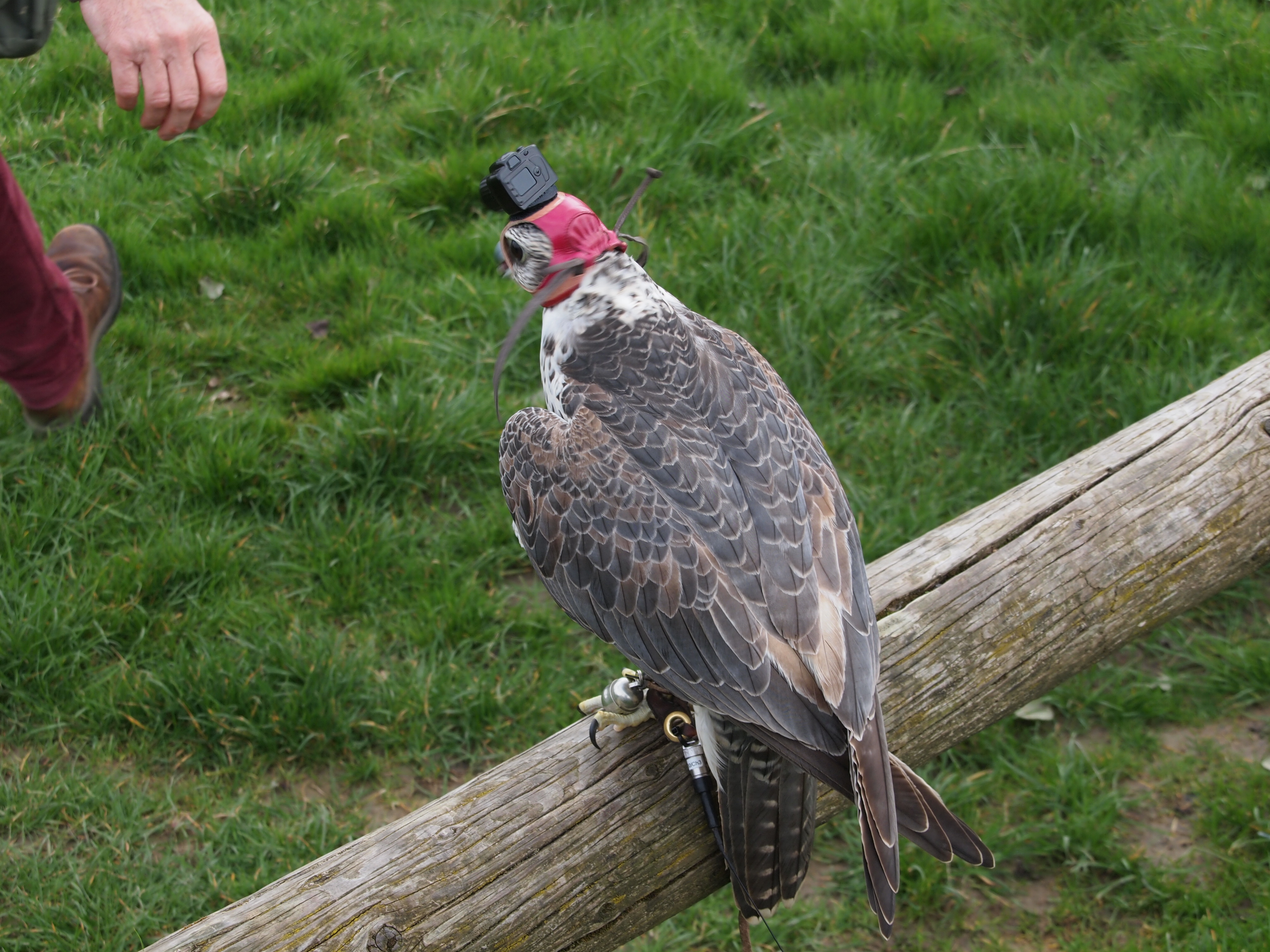 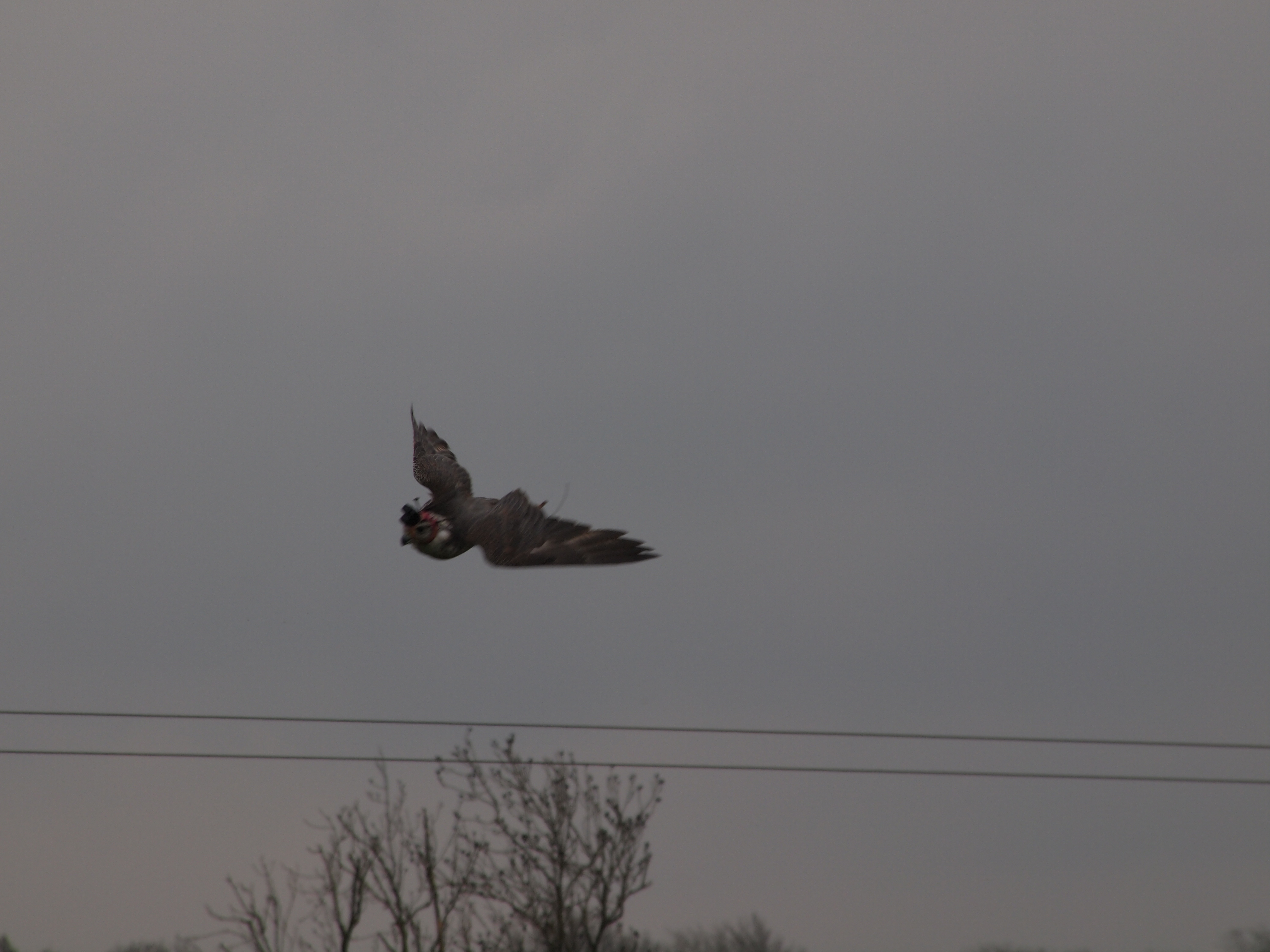 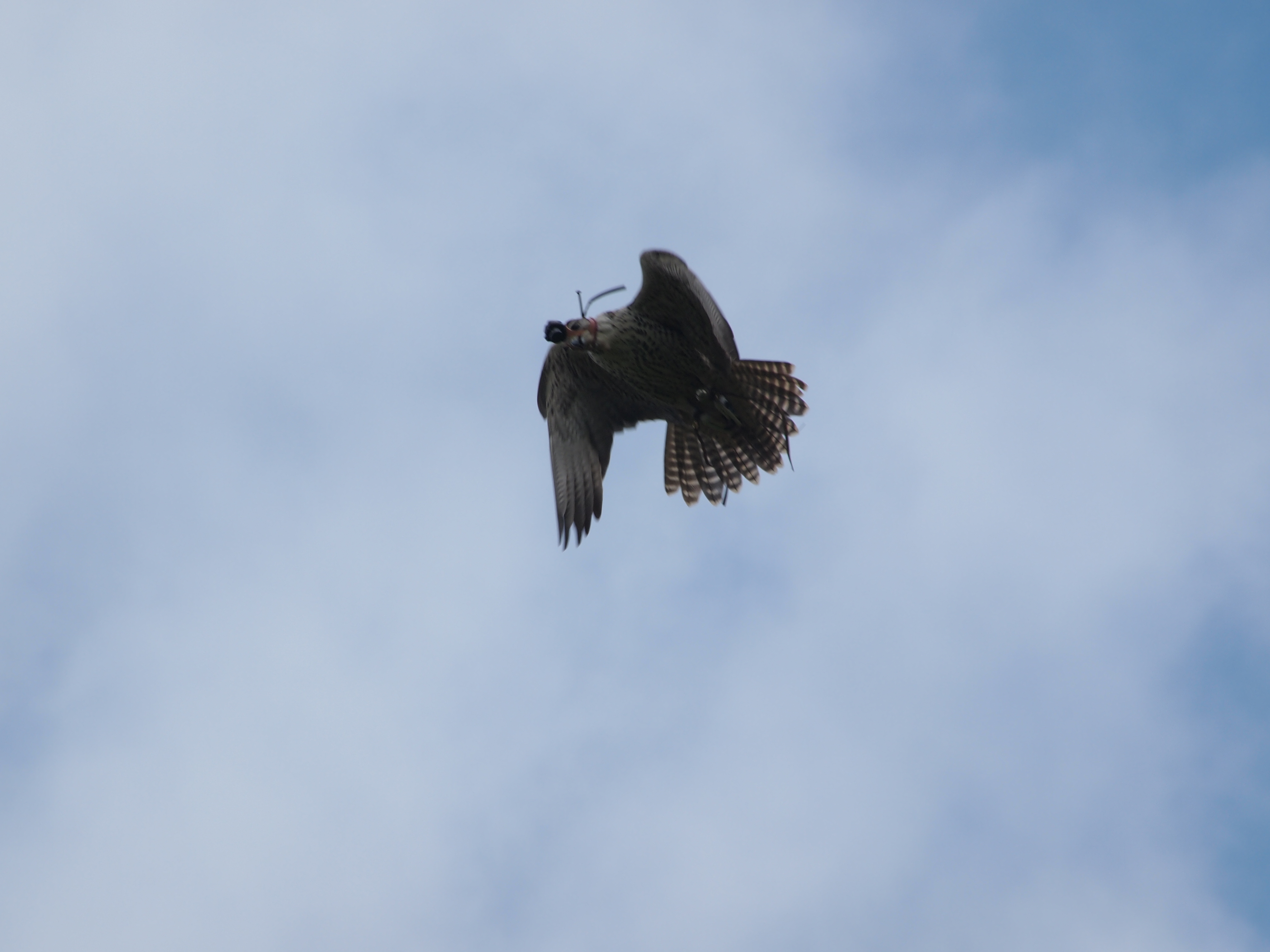 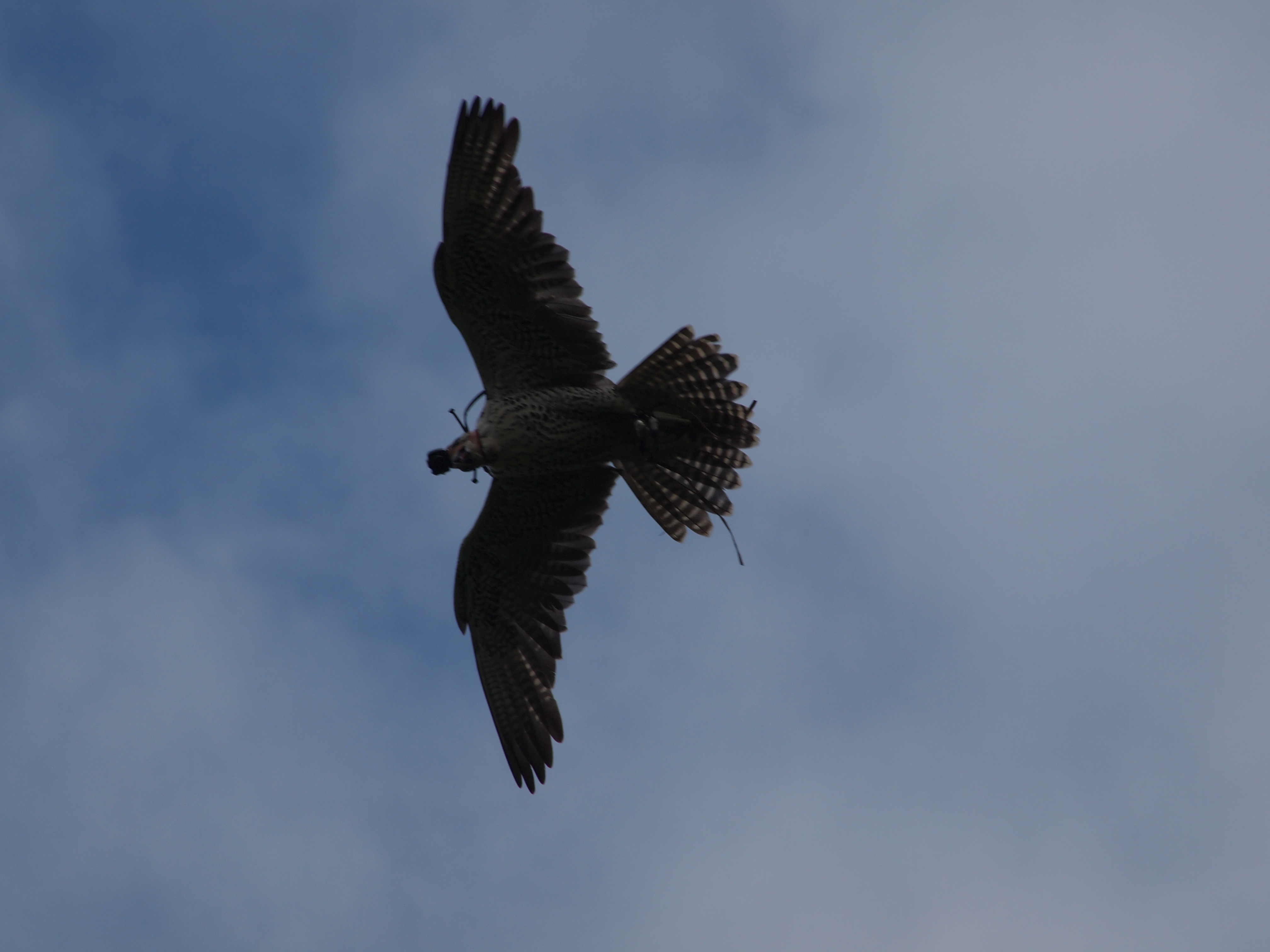 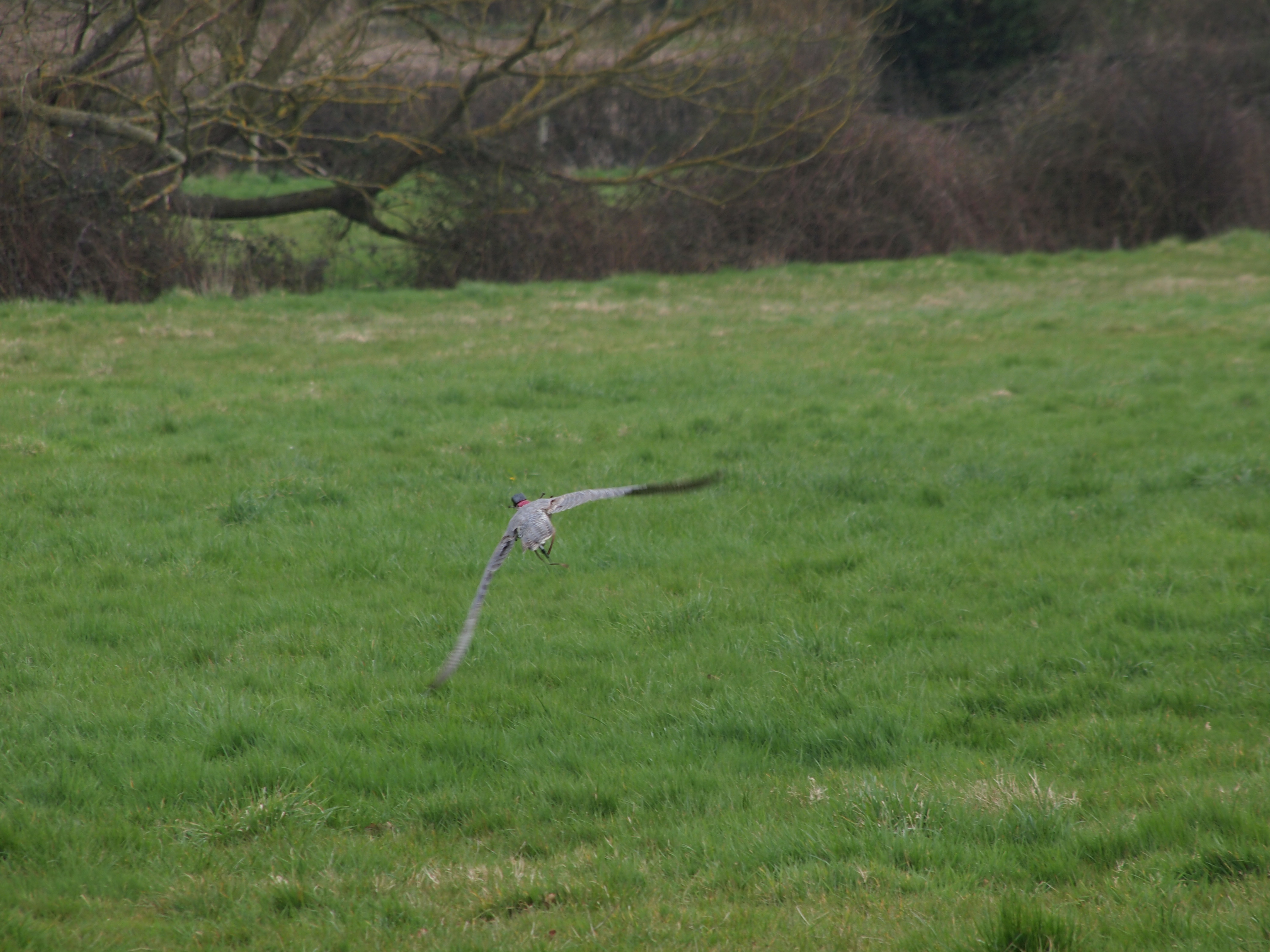 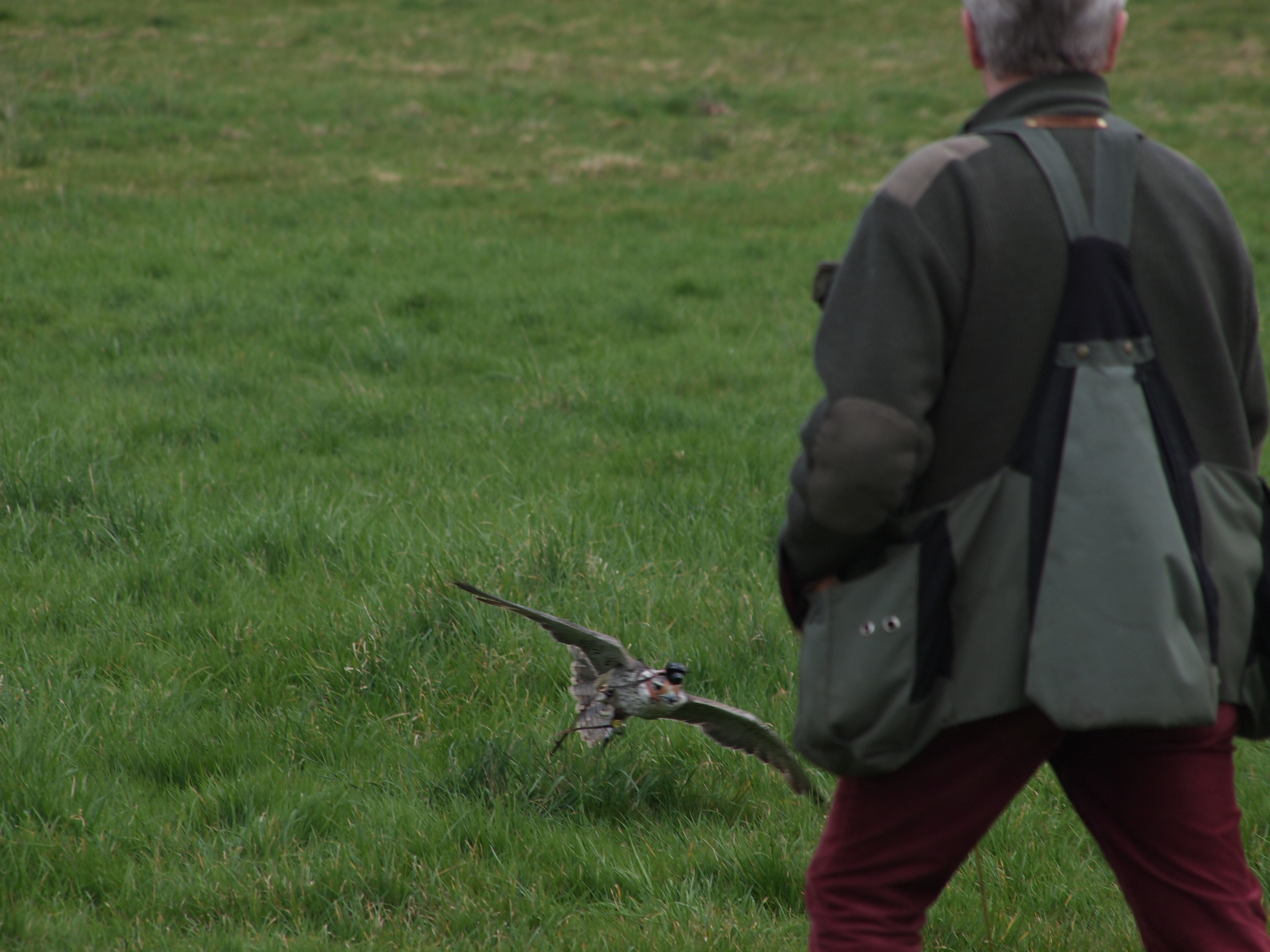 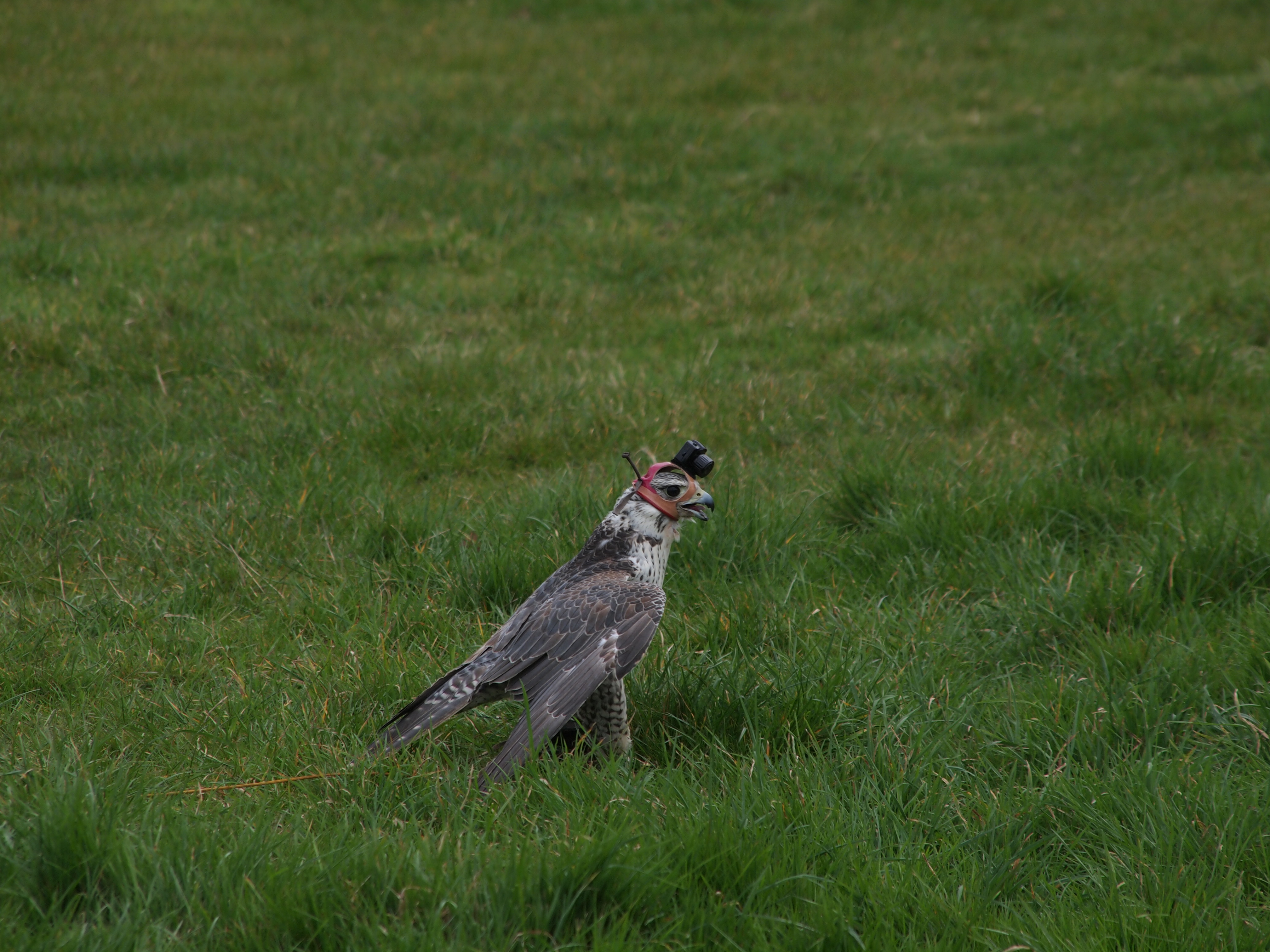 Again, the hood seemed to shift forwards here.  We decided to move ahead with just using the Dizaul camera, after testing both cameras.  The quality on the Dizaul is vastly superior to that seen in the 808.  A test clip from the 808 can be seen here:

However, it seems that the 808 video clips have issue with uploading to Youtube correctly. The clip originally had audio (of I would say slightly better quality than the Dizaul), and was not just a series of broken images. Of the frozen images however, the picture quality is accurate. It seems that the ways in which the video is encoded causes issues with Youtube, which enforces my belief that the Dizaul is the better camera for this purpose. Both of the cameras are set to incorrect times, and do not correctly sync when connected to a computer. There are some text files indicating time, but I did not feel the need to learn to edit these so that the times appear correctly.