It was decided that MAVLink would be the best protocol for me to use to send commands to the UAV from my custom controller.  From having a conversation with someone that has used it before, it was suggested to me that I use MAVProxy instead.  This is a Python based interface, which saves you from having to manually generate the MAVLink commands yourself.  I tried using the pre-built package recommended on the Github page of the project, but found that this did not work correctly.  As it turns out I had the wrong version of Python installed.  It was recommended to me to download Anaconda instead, as it comes with various bits and pieces that are both useful and often difficult to install on Windows otherwise.  By installing this (and MAVProxy), I am able to run the program from the command line.  At this point I have not done anything meaningful with the commands, but that is not a huge issue.  I currently have the UAV connected to my laptop via a USB cable.  I would much rather have a wireless connection (for which I would need to have the battery connected to the UAV) for actually testing the commands.  In the current state I can submit commands, but the UAV does not seem to react to them.  I’m unsure if this is due to the system “knowing” that it only has a USB connection.  Online research suggests that a poor GPS fix can cause issues, and I am testing this in a room that gets no GPS coverage.  It would be very annoying if I did need a GPS fix to be able to test, as the COTS controller does not require a GPS fix to let me fly the UAV.  A screenshot of MAVProxy, showing commands: 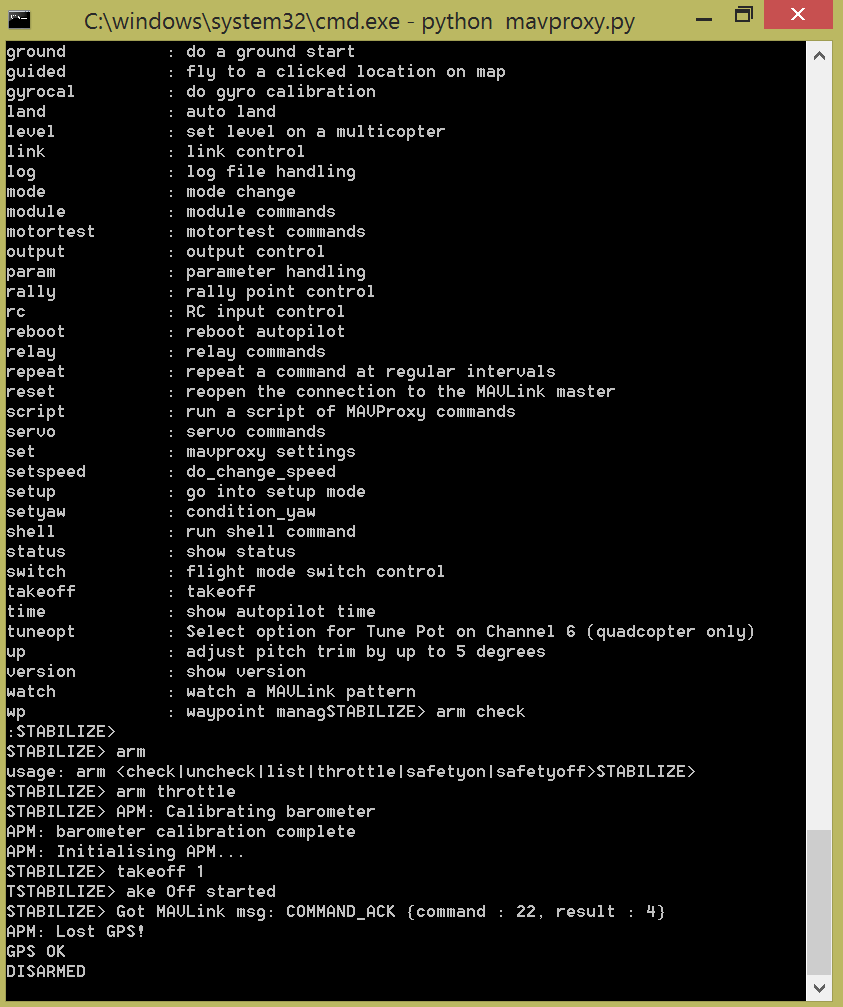 Arming the UAV does not seem to result in anything actually happening.  It is interesting that the UAV does “disarm” if more commands are not received within ~5 seconds, which makes me thankful that I have learned to touch-type.