Today we did a test flight of the UAV, using a COTS controller owned by my dissertation supervisor.  We took the UAV to a field, and my supervisor flew it around a bit. 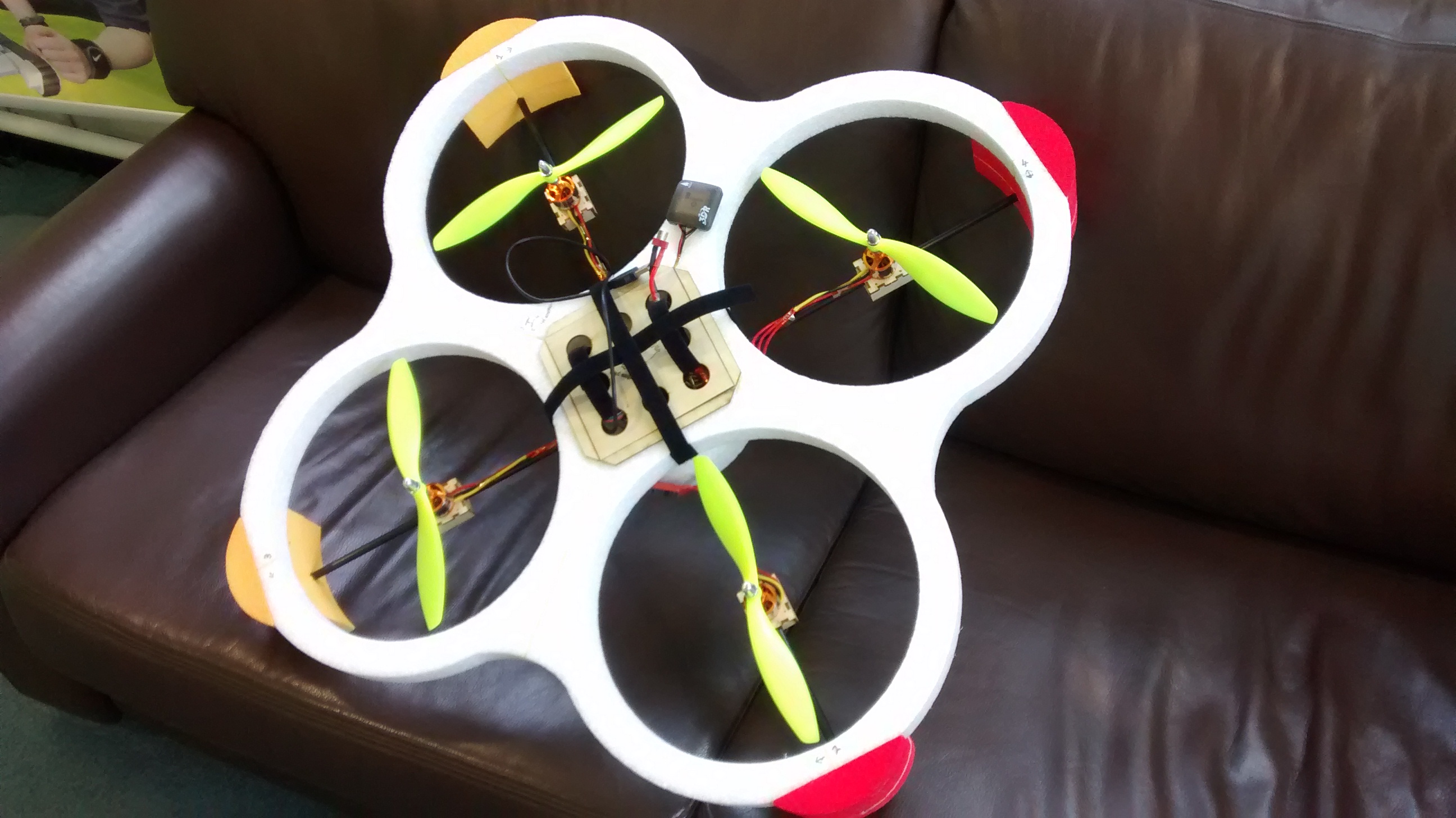 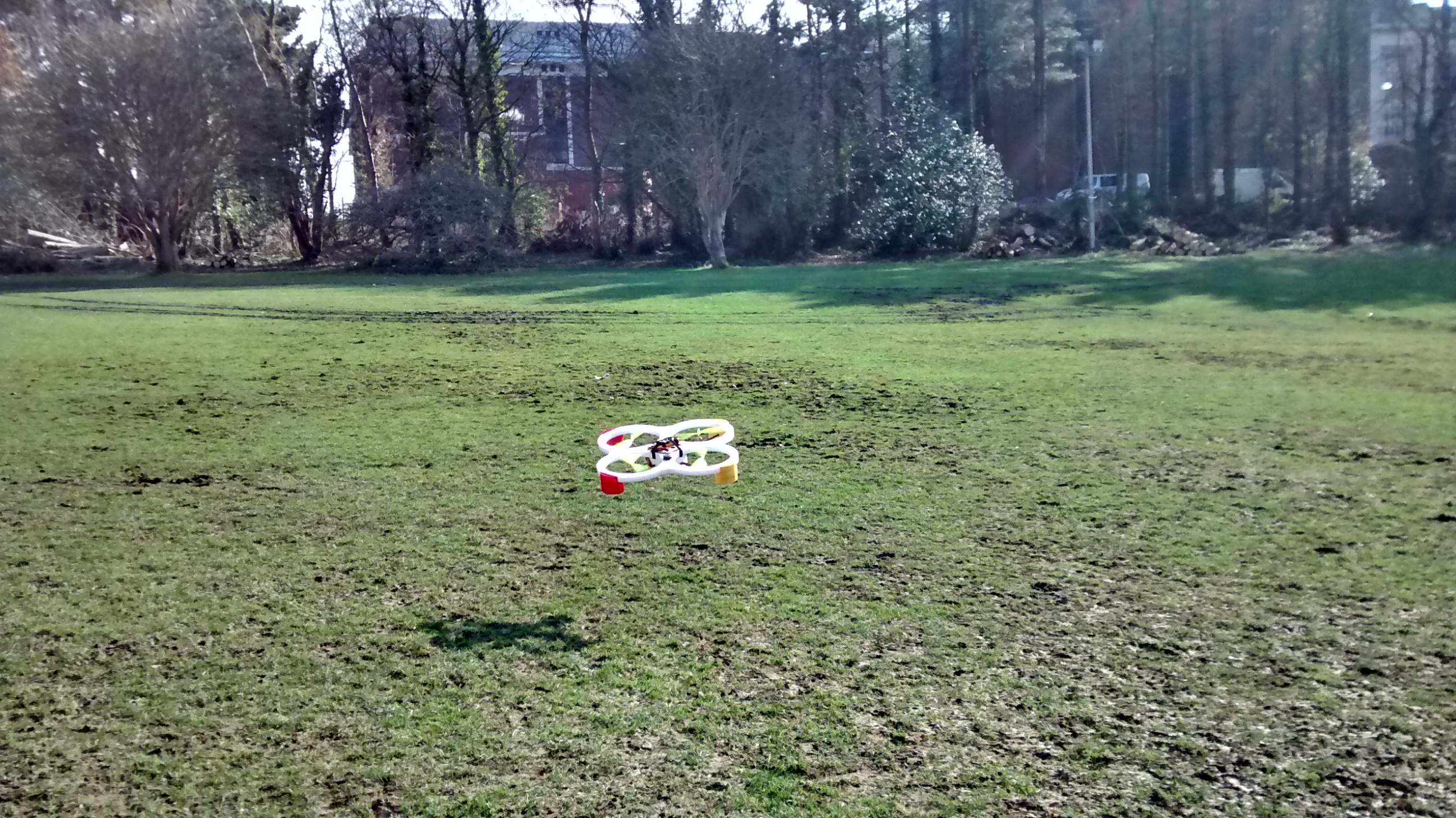 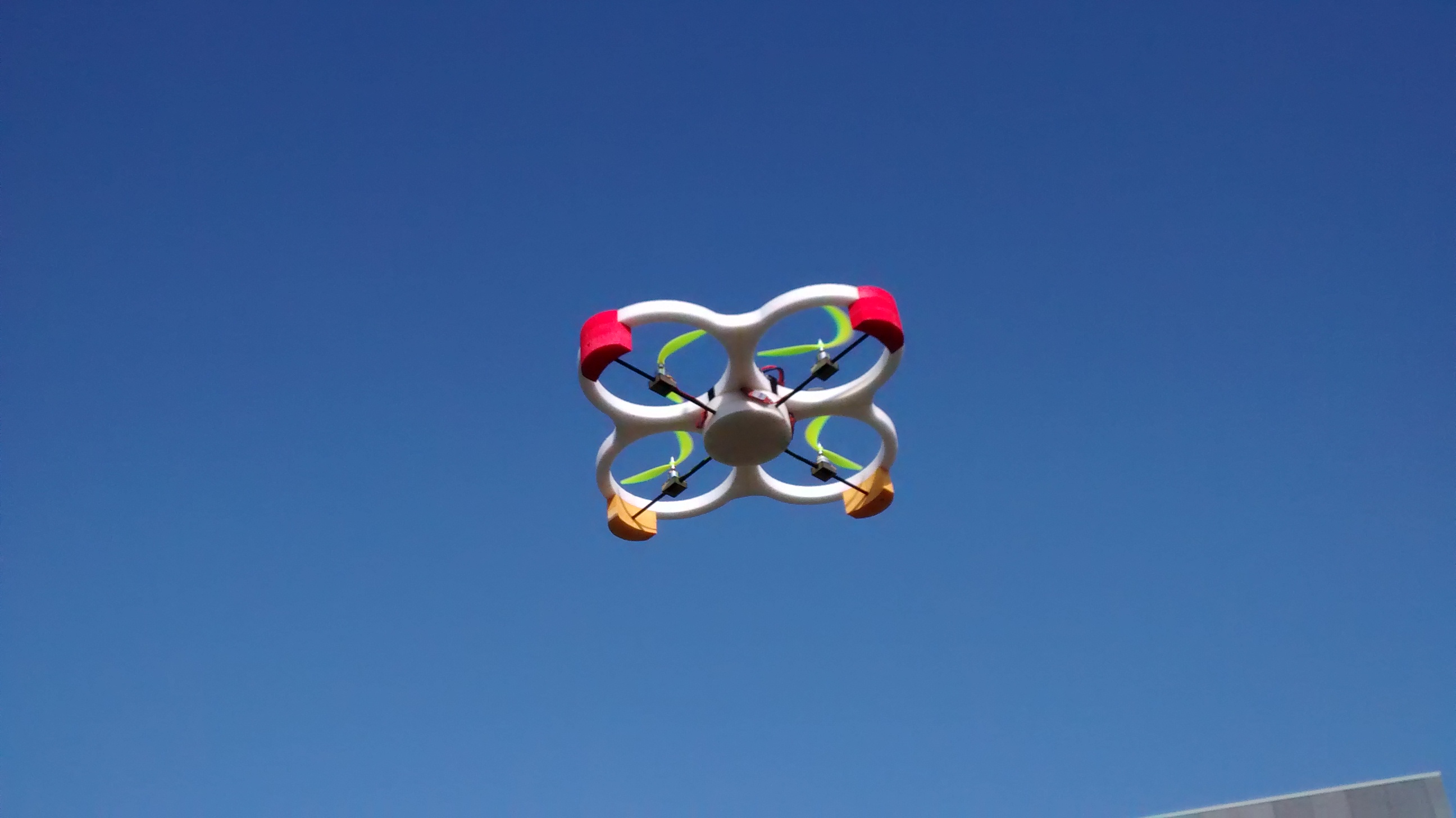 The UAV generally flew well.  One of the rotors seems to have a slight issue (which I am hoping to examine the flight logs of), and the “loiter” mode seems to have some issues.  The UAV remains near-stationary in the X and Y axis (despite the wind), but gently drifts towards the ground.  We suspect it may be that the UAV things it is higher up than it actually is, and so attempts to “correct” by dropping downwards.  This can be seen in the following video:

One of the main issues of the flight was that my supervisor let me have an attempt at controlling the UAV by myself.  The result of this can be seen in the following flight path (taken from the GPS data logs of the UAV): 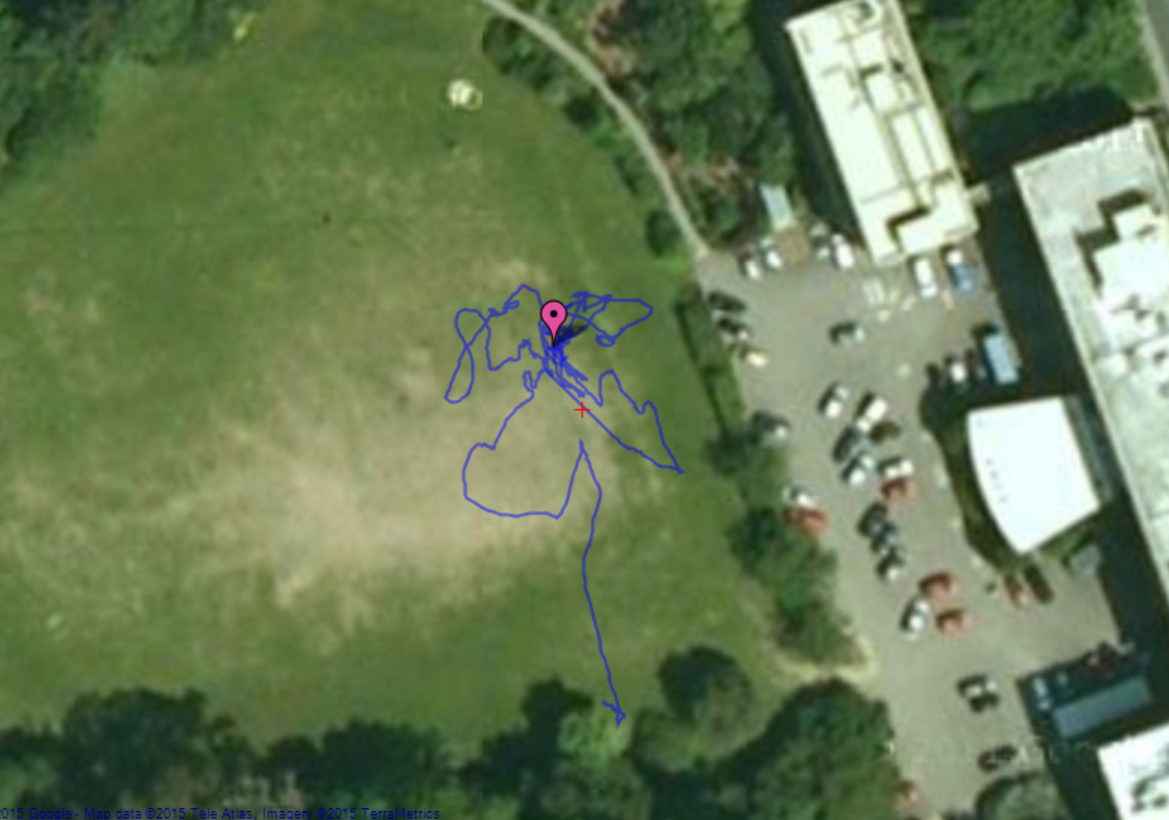 I have learned from this that I am not very good at controlling UAVs yet, and that it is indeed quite a difficult thing to do.  From this experience, I will try and make the control system much more way-point based rather than manual control based.  However, due to completing a qualification in flying UAVs, hopefully one of the falconers at the school should be able to fly it well.

The impact caused some damage to the frame of the UAV, breaking the EPP.  However, we were able to simply pop it back in to place (it was not a clear break) and continue flying: 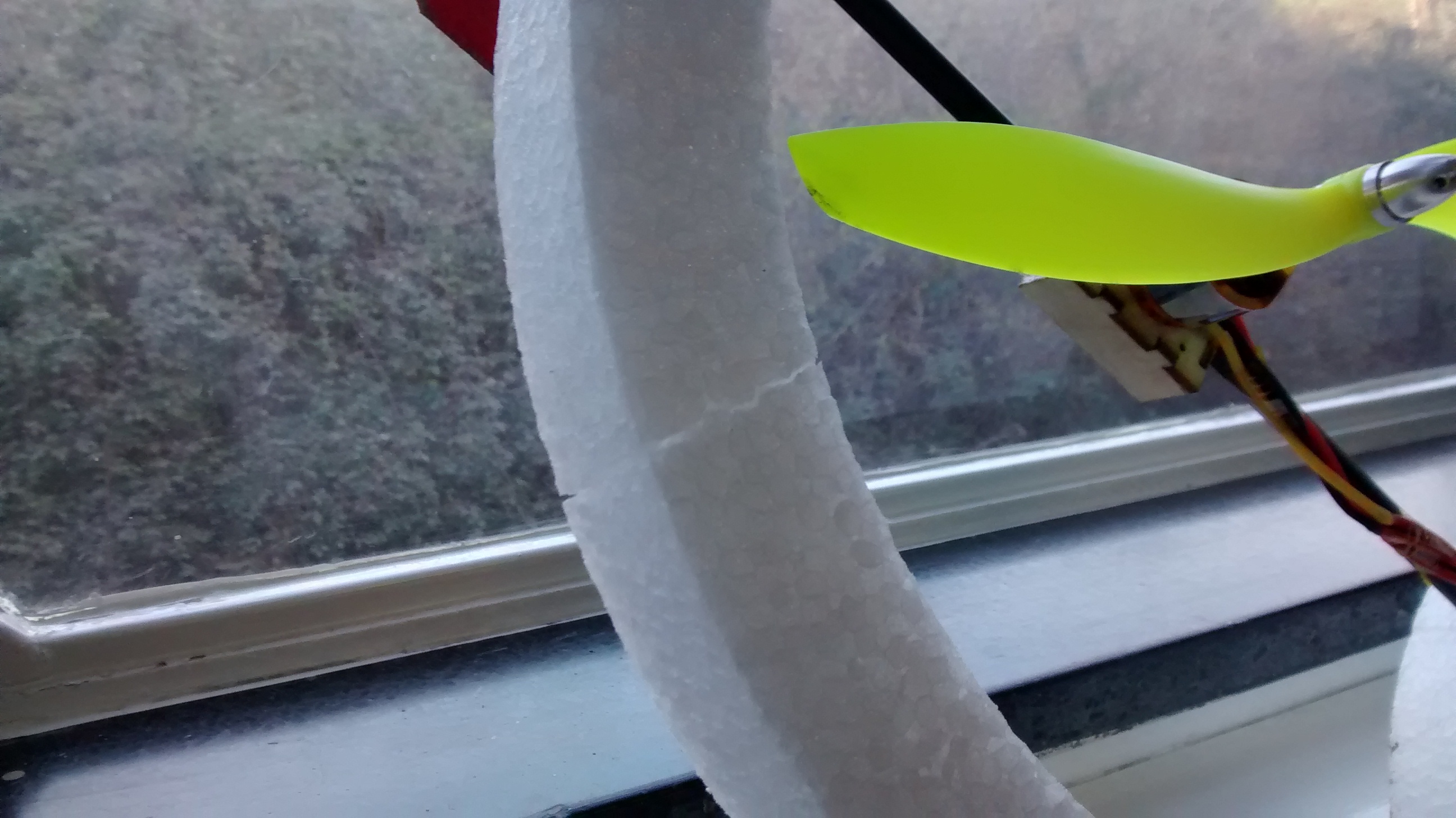 We will be repairing this with more of the glue that was used to assemble the frame in the first place.  If the UAV did not have this EPP buffer around the edge, I daresay that the crash would have been a lot more damaging.  I’m pleased with how resilient the UAV seemed to be during the flight, as it did not have particularly gentle landings either, yet does not seem to be any worse off for them.  Of course in the case of a bird-UAV collision we would rather the bird survive, but it seems that the UAV would potentially be able to survive it too.  Being able to survive a crash landing is certainly a plus point, anyway.

I will be looking at the log data more closely, trying to pin-point exactly what causes the issues with loitering.  It is possible that I may also be able to learn other things about the performance of the UAV additionally.  We discovered during the test flight that the laser-cut wood on the top of the UAV blocks the view of the light on the ArduPilot that indicates GPS fixes, and so this point is something that will need to be considered when redesigning the “lid”.  The USB cable used to connect the UAV to my laptop will also need to be changed for a shorter one as the current one (looped under the Velcro holding on the battery) came loose and contacted the propeller during the crash, resulting in the black marks seen on the blade in one of the above pictures.