I met up with people at the falconry center I’m working with for my dissertation, and discovered that they’ve had a stab at falconry UAVs in my absence.

They had an off the shelf UAV/controller.  They’ve put a clip on the bottom of it, which holds half an empty water bottle: 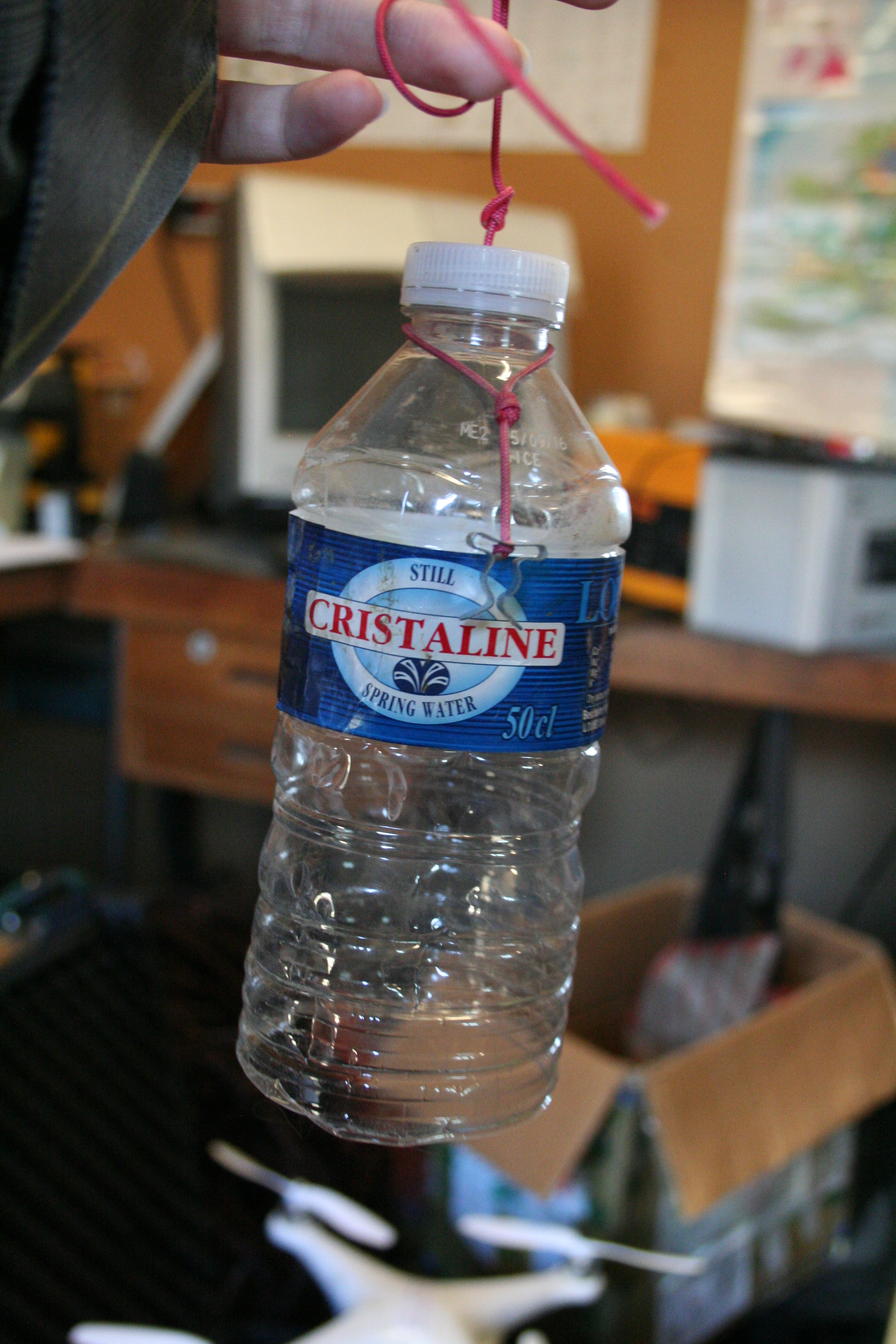 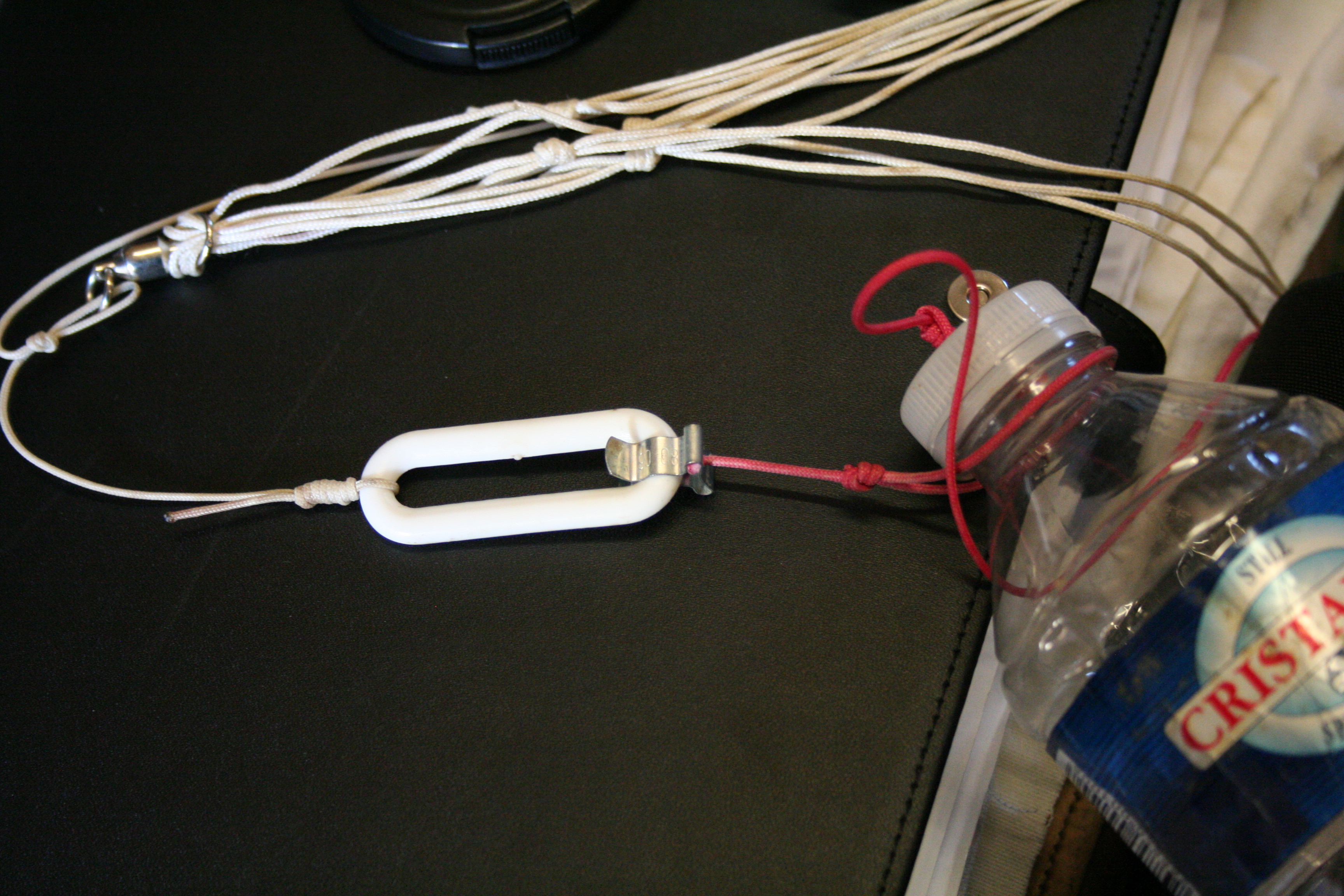 The parachute is pushed up inside the bottle.  The idea is that they fly the UAV with the lure under it, and the bird grabs the lure.  The force of the bird grabbing it pulls the parachute from the bottle and undoes the clip.  The parachute stops the bird from flying off with it, it just sort of hangs on until the lure hits the ground.  The falconer can then go retrieve the bird, hopefully before it can eat all of the meat on the lure and get bored.  They did a demo flight: 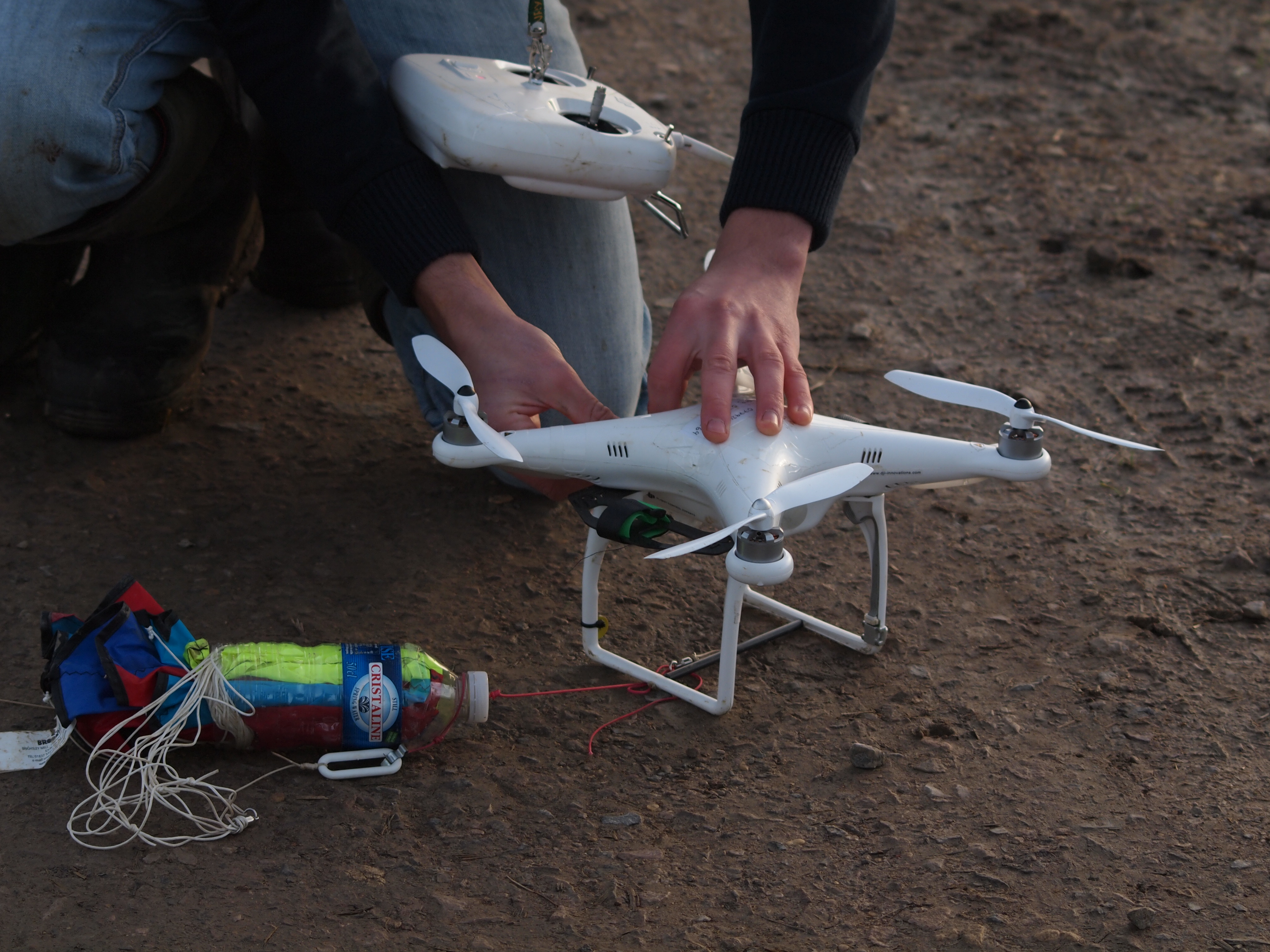 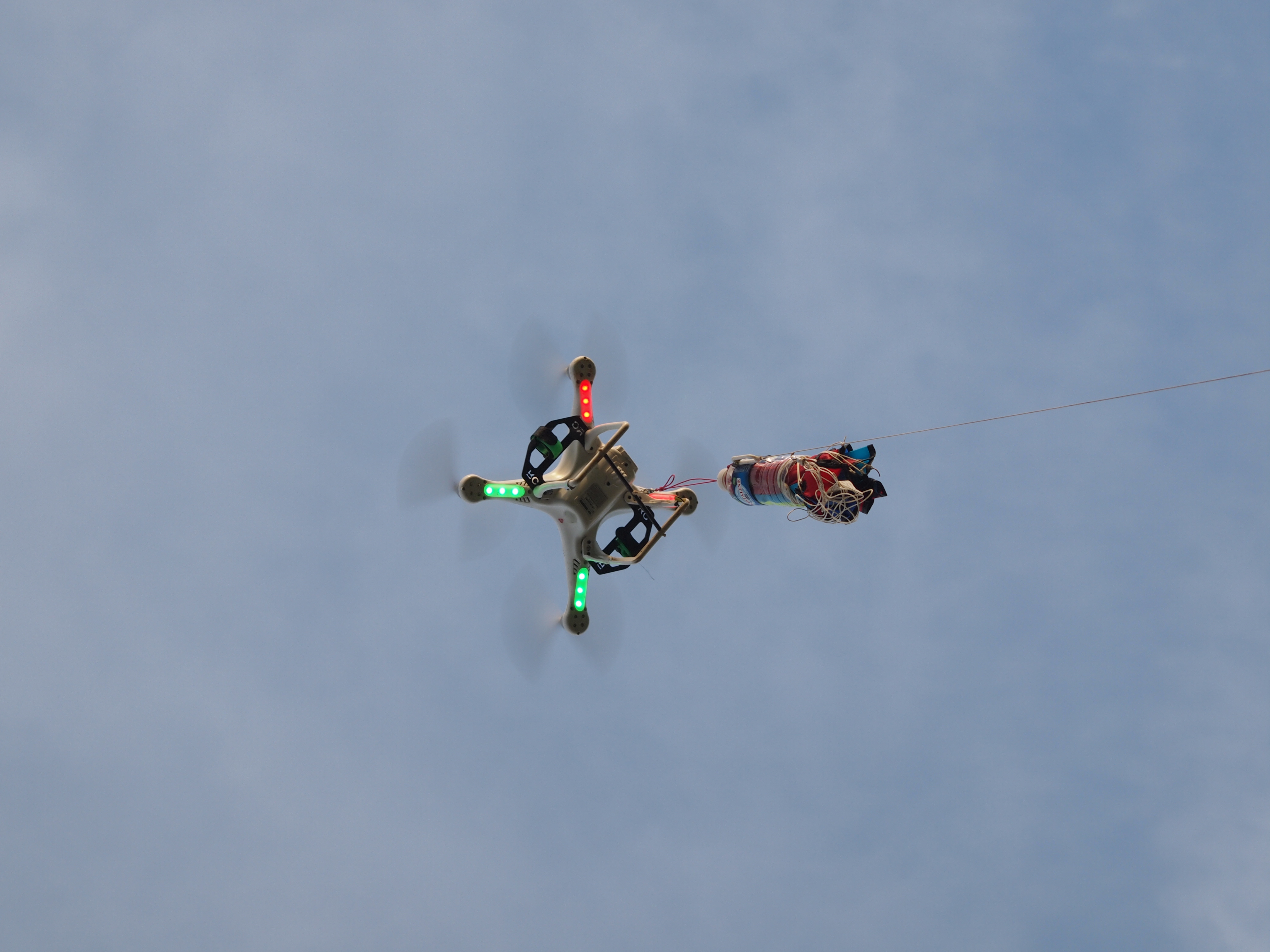 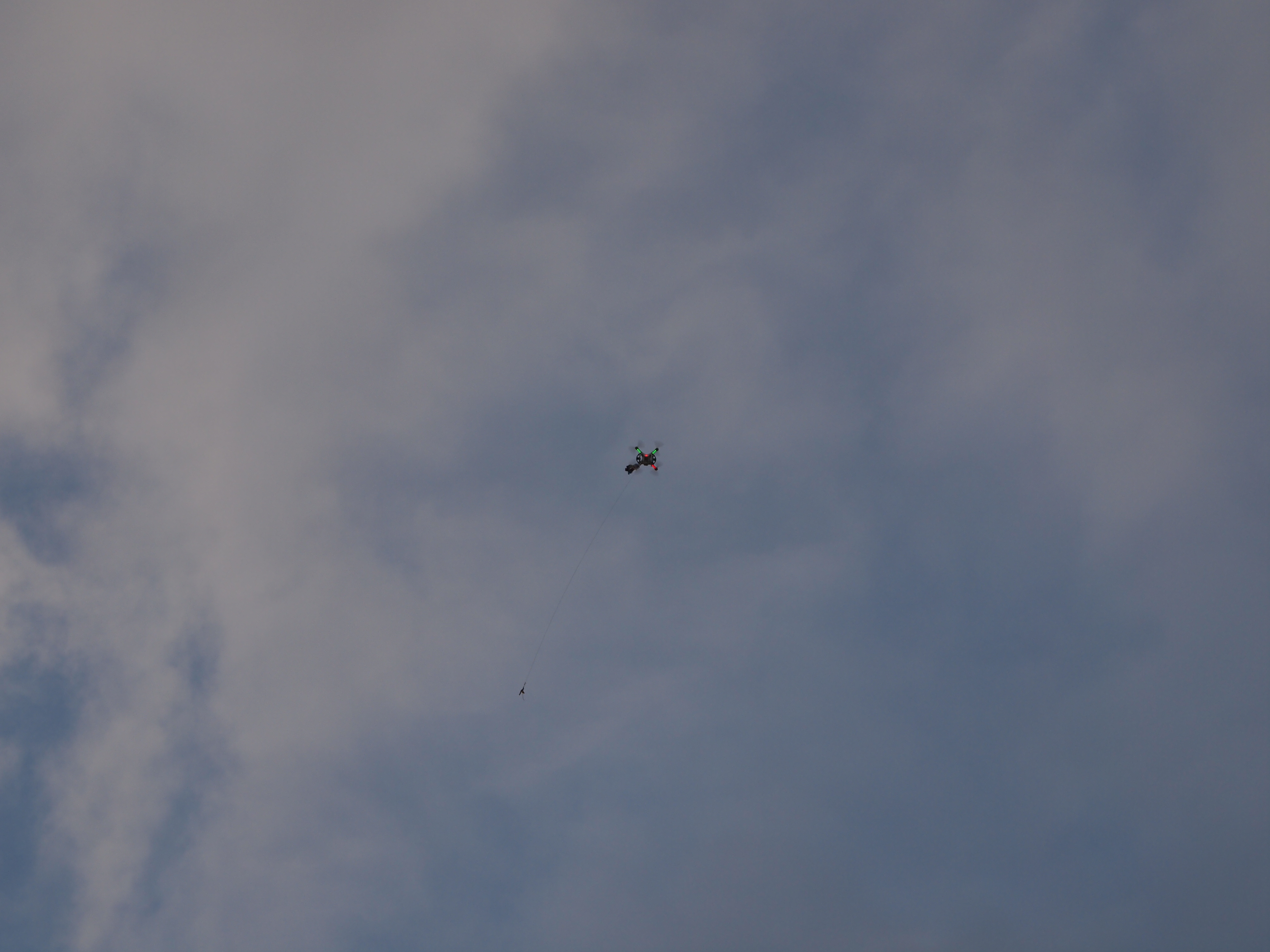 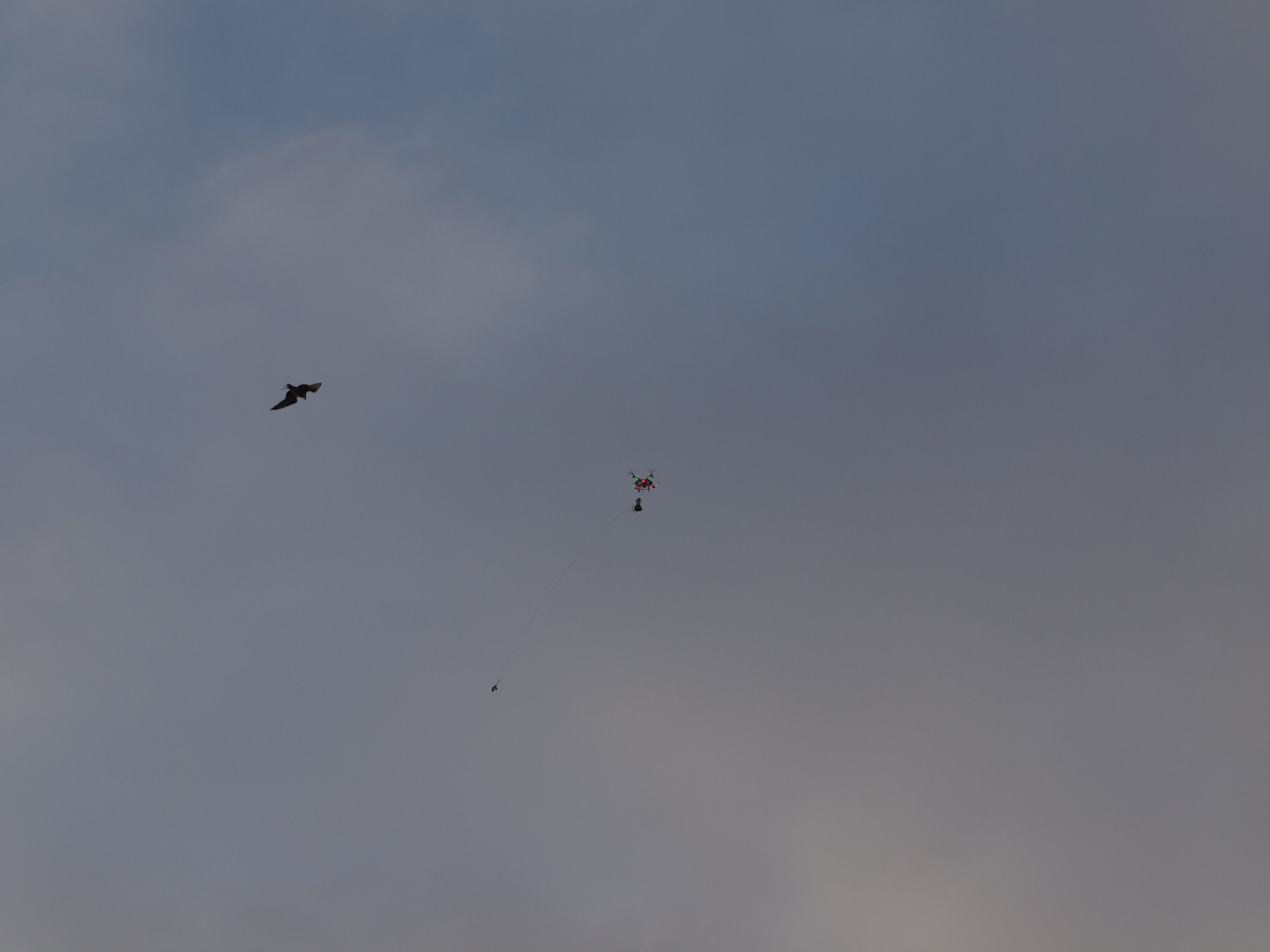 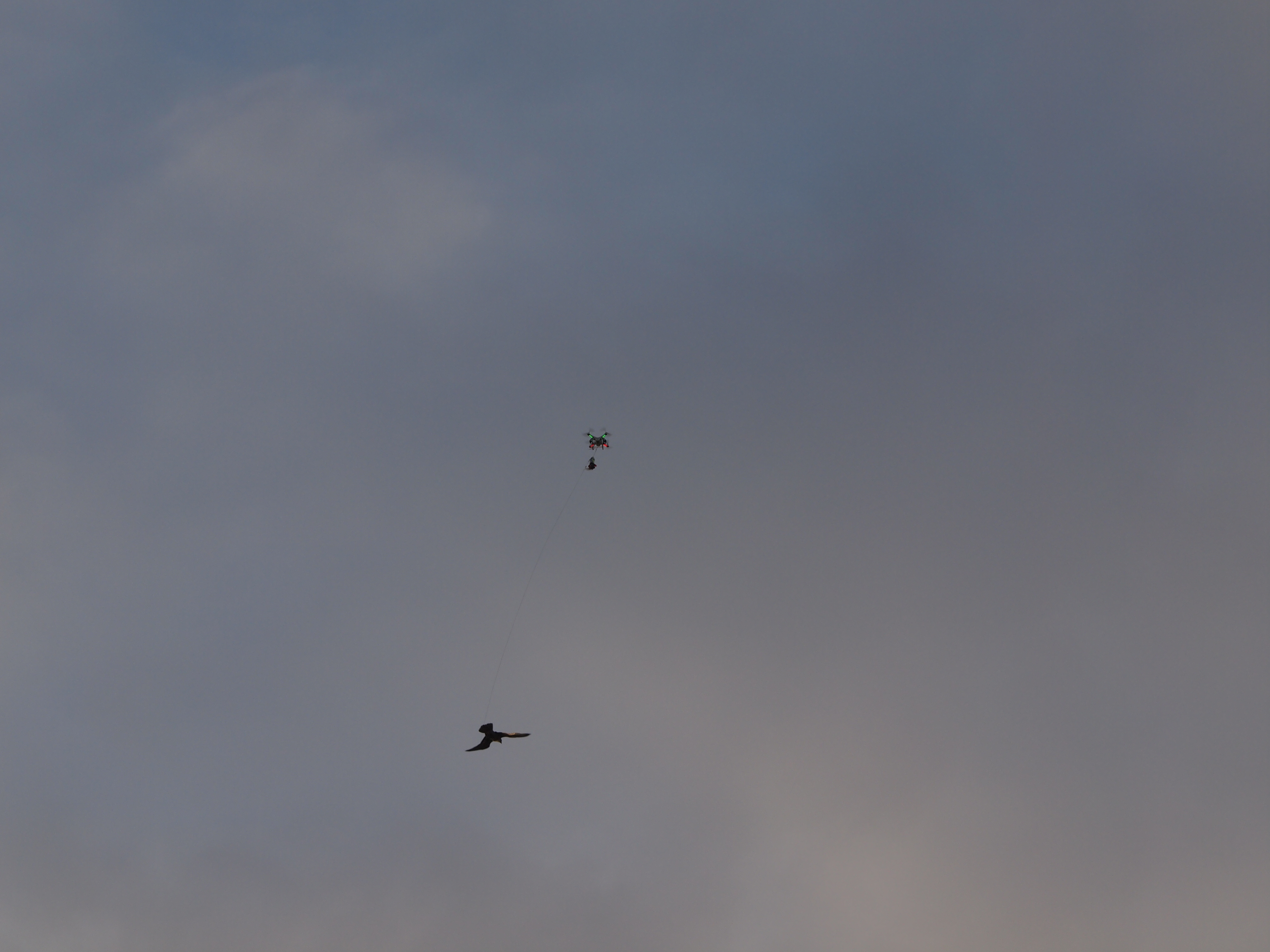 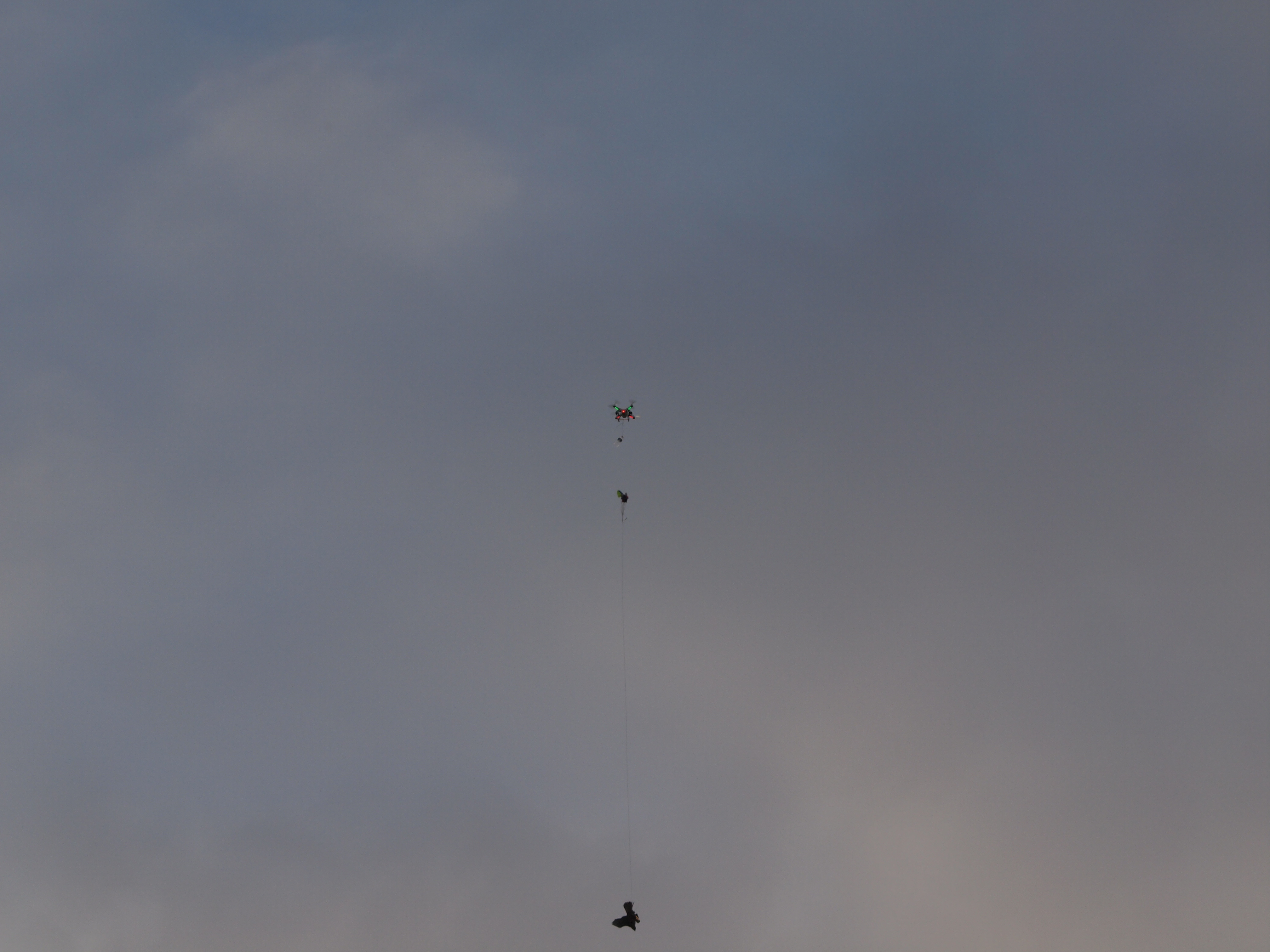 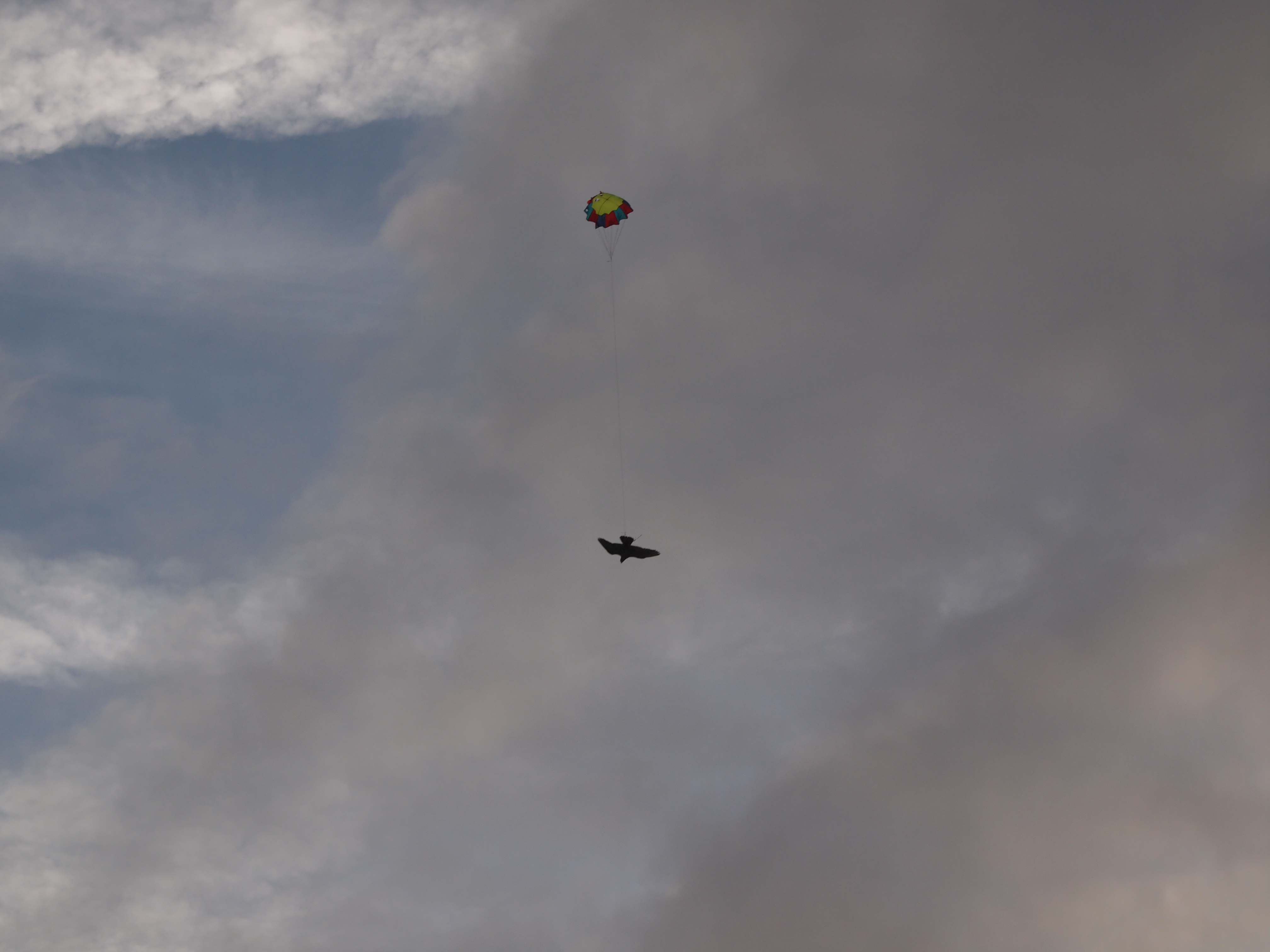 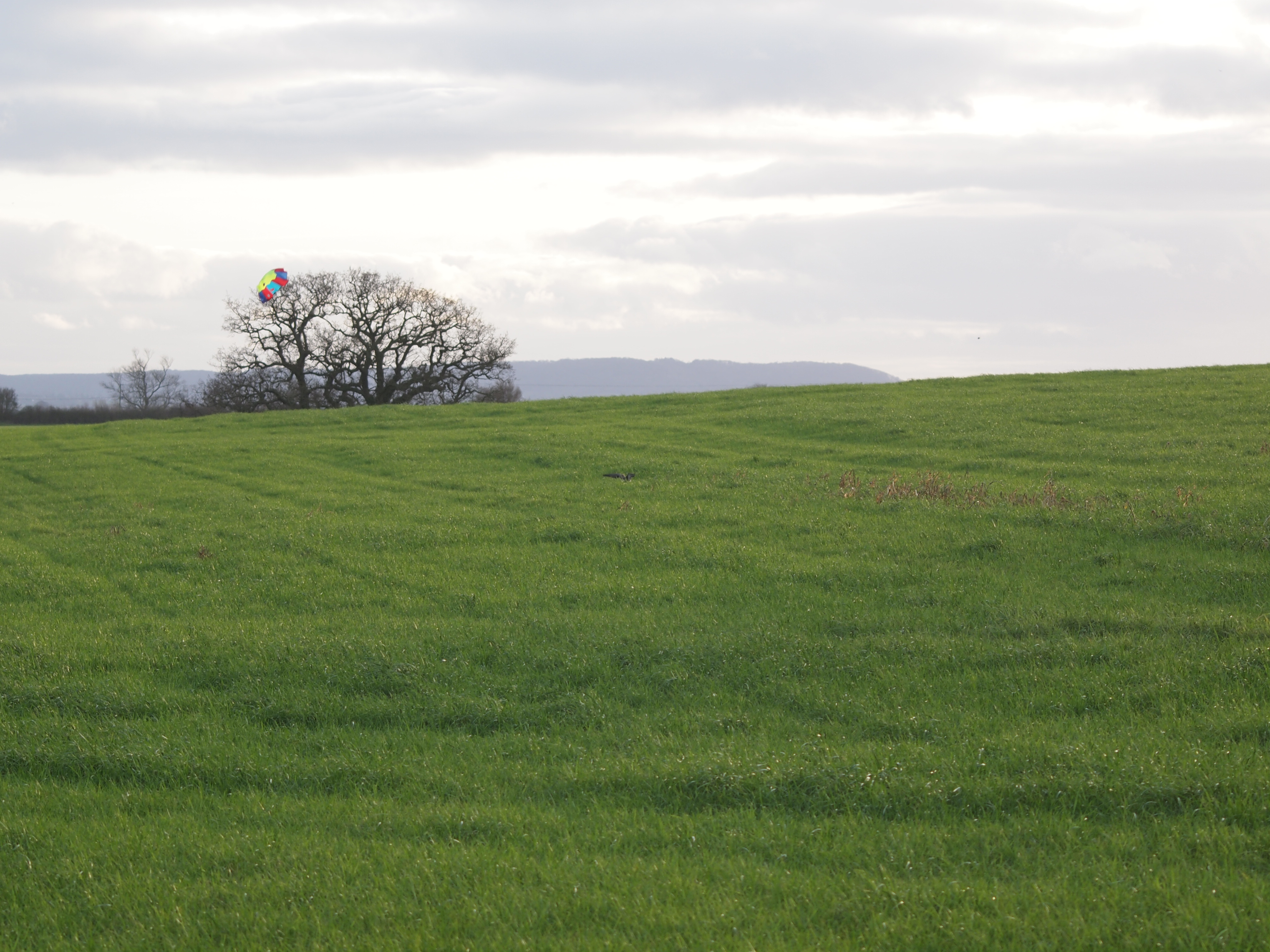 I mentioned the idea of dropping a bit of meat from a box.  They mentioned that in some Arab nations they already do this with large UAVs, which drop entire live ducks.  This is a bit cruel for the UK they said.  I mentioned the idea of the small piece of meat.  They think this would be too difficult to train.  If you trained a hovering bird like a kestrel to hang around under it, it will only be looking down and so won’t see the meat.  Other birds will not associate the UAV with food, and so wouldn’t put themselves in a position to catch what comes out of it.  If they did, they would probably just try and grab the UAV.  A big chunk of meat would have a better chance of being caught, but greater risk of the bird flying off with it.

They did however already have an idea in mind for an improvement to their current system, which is beyond their capabilities.  They tried to sketch it out for me a bit: 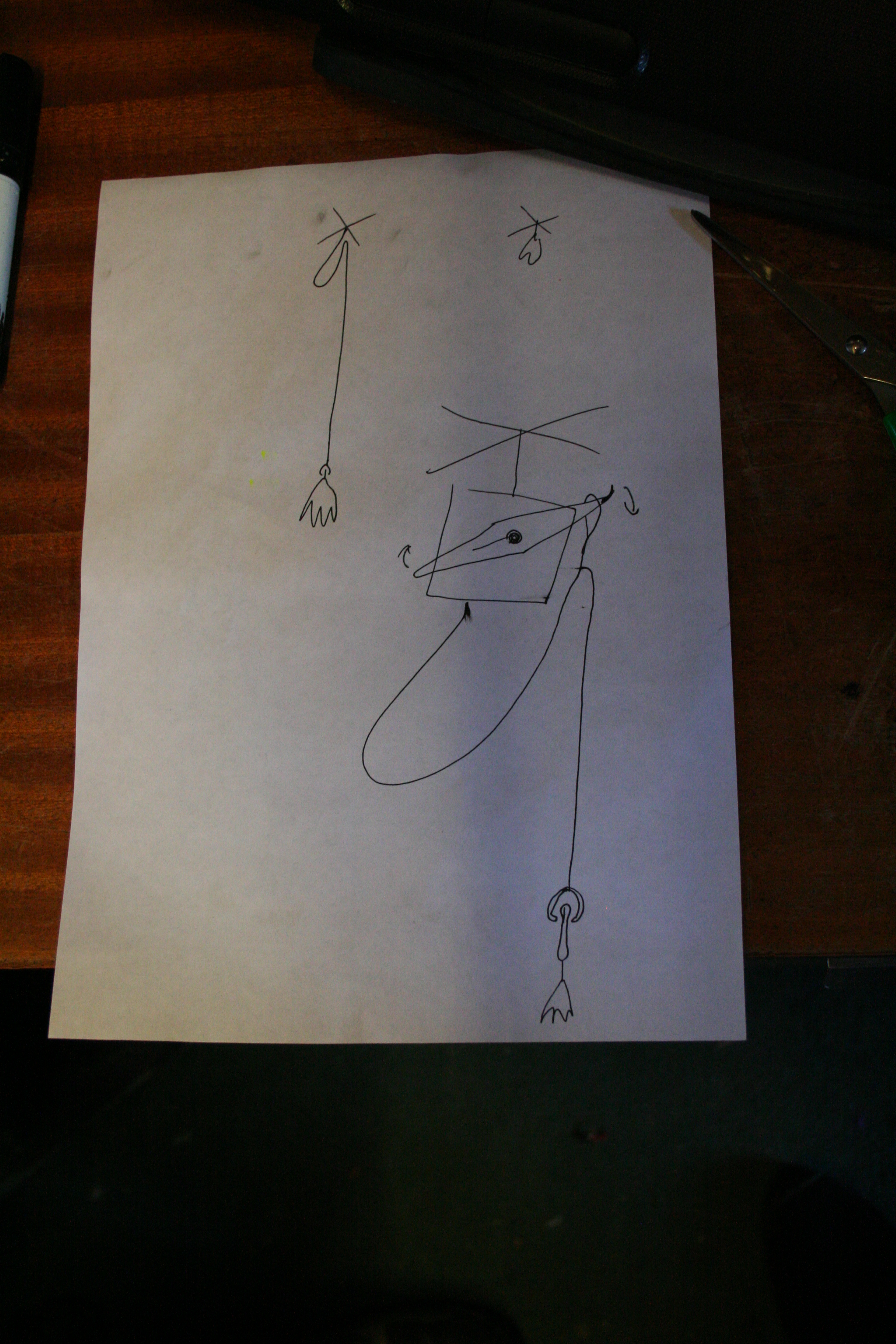 They would have a clip on a string attached to the UAV, with a loop on it that can be hung over a pole on the UAV.  They would then have a button they can press which causes this pole to rotate, and the loop to slip off of it.  This would cause the lure to drop an amount, and when its line becomes taught, it would hopefully be jerked out of the clip.  They would need to have a fast response on pressing a button and the lure being dropped, so they can release it when the bird is in a good position to catch it.  They would also need to run some trials on the speed of the lure freefalling vs the speed of the bird trying to catch it.  They think it would probably be a matter of height.  They prefer the lure to be as far from the UAV as possible, so the bird doesn’t risk impacting/attacking the UAV.

They highlighted some issues with their current system.  The battery in their UAV cannot operate in temperatures under 5 degrees Celsius.  Falconry is a winter sport, and they’ve already had some issues with this, especially due to height.  When I was visiting, they actually had the controller in pieces for cleaning as some mud had got in and killed it.  They did manage to get it working again however.  As you can see from the pictures, the UAV has lights on it.  They think the bird doesn’t mind the lights, and so they don’t mind them.  However, when the UAV starts up, it plays a loud jingle.  The bird (hooded) hears this noise and knows whats going to happen, and so starts bating (jumping from the glove), which is a hassle to deal with.  They’d rather it was quieter.  The UAV has a red light that starts flashing when the battery is low.  It doesn’t give much notice, and will sometimes flash/die during a flight I’m told.  They expressed a wish to be able to see how full the battery is.  They have purchased some small devices (not entirely sure what) which record height so that they can tell how high the UAV was during the flight.  They then make it go higher/lower on the next flight based on this.  They expressed a wish for being able to read off the height during the flight as it’s hard to estimate.   Due to the current method of landing, they fly the UAV over a large, empty field.  They don’t want to walk that far, so they do like beiong able to control the UAV in more than just an up/down fashion.  They also like to be able to fly the UAV back to their hand after the flight so it doesn’t get damaged.  They have bought a GoPro camera but have not attached it.  A GoPro probably wouldn’t generate great footage when attached to the UAV, due to the distance.  If it could be above the clip the lure falls from it might get some good footage however.